President Trump’s former White House Chief Strategist Steve Bannon suggested Dreamers – undocumented immigrants who came to the US as kids – should ‘self deport’ once their DACA work permits run out.

‘As the work permits run out they self deport,’ Bannon told Charlie Rose in an interview for 60 Minutes that airs Sunday night. ‘I think what we have to do is focus on the American citizens,’ the ex-Trump aide urged.

Bannon was among those members of Trump’s inner circle who wanted him to fully do away with DACA, the Deferred Action for Childhood Arrivals program that President Obama set up. 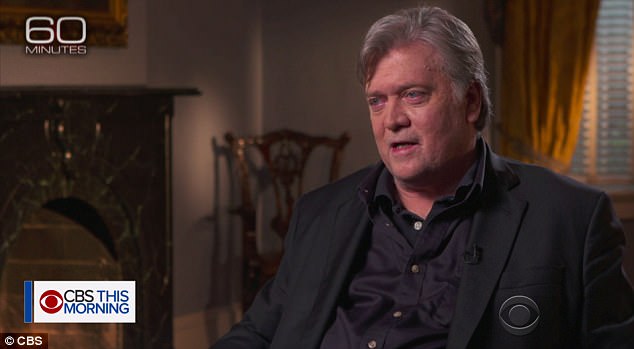 Steve Bannon said that he believed Dreamers should ‘self deport’ after their DACA work permits run out, worrying that the issue will split the Republican Party during the primaries

Trump instead kicked the program to Congress, using Attorney General Jeff Sessions as the instrument to call what Obama did illegal, before turning around and suggesting he would look at it again if lawmakers failed to do their job.

‘I’m worried about losing the House now because of this, because of DACA,’ Bannon said.

‘And my fear is that with this six months down range, if we have another huge – if this goes all the way down to its logical conclusion, in February and March it will be a civil war inside the Republican Party that will be every bit as vitriolic as 2013,’ he added.

Bannon was referring to the split between establishment Republicans and Tea Party-aligned lawmakers that caused friction in the House under Speaker John Boehner.

‘And to me, doing that in the springboard of primary season for 2018 is extremely unwise,’ Bannon said, as every GOP House member will have to have to face a primary opponent before the November election.

DACA had allowed the so-called ‘Dreamers’ to come out of the shadows, receive documentation and work without fear of deportation.

Bannon didn’t believe they should be afforded that opportunity at all.

‘There no path to citizenship, no path to a green card and no amnesty,’ he said. ‘Amnesty is non-negotiable.’

Rose pointed out that America was built by immigrants.

‘You couldn’t be more dead wrong,’ Bannon replied. ‘America was built on her citizens.’

‘Don’t give me, this is the thing of the leftists, Charlie, that’s beneath you. America’s built on our citizens. Look at the 19th century. What built America’s called the American system from Hamilton to Polk to Henry Clay to Lincoln to the Roosevelts,’ Bannon said.

He argued that ‘economic nationalism’ was what the country was founded on.

‘We look after our citizens, we look after our manufacturing base and guess what?This country’s going to be greater, more united more powerful than it’s ever been,’ Bannon said. ‘This is not astrophysics, OK?’

‘And, by the way, that’s every nationality, every race, every religion, every sexual preference, as long as you’re a citizen of our country,’ he said. ‘As long as you’re an American citizen you’re part of this populous economic nationalist movement.’

It was here in the interview where Bannon, a Catholic, got himself into trouble with the Catholic church.

‘The bishops have been terrible about this,’ Bannon said when Rose brought up that New York Cardinal Timothy Dolan publicly supported DACA.

CBS News had released a clip of this portion of the interview on Thursday.

In the extended 60 Minutes interview, Bannon discussed a number of topics, including his exit from the White House, which happened last month.

As for his exit, Bannon still contends it was his decision to split from the White House.

‘I’m not cut out to be a staffer,’ Bannon said.