‘Twenty one players… they’re all f***ing s***’ was the chant from Bournemouth’s away fans when they came from behind to beat Nottingham Forest 3-2 last month.

Such has been the splurging of cash at the City Ground, that number’s already out of date.

A total of 22 new players have walked through the doors since my club’s return to the Premier League after an absence of more than a quarter of century.

Supporters were gobsmacked at the level of spending … Forest spent more in those 12 weeks than they’d shelled out in their previous 157-year history.

The transfer-fee record was being smashed on a weekly basis as an array of talent arrived.

Some got carried away with it, which I guess was understandable given how alien this was to the majority of Forest fans. Talk of challenging for Europe, even top four being achievable … but amidst the hyperbole and hysteria, the voices of reason, those speaking common sense and advocating caution, a football reality check, were drowned out. 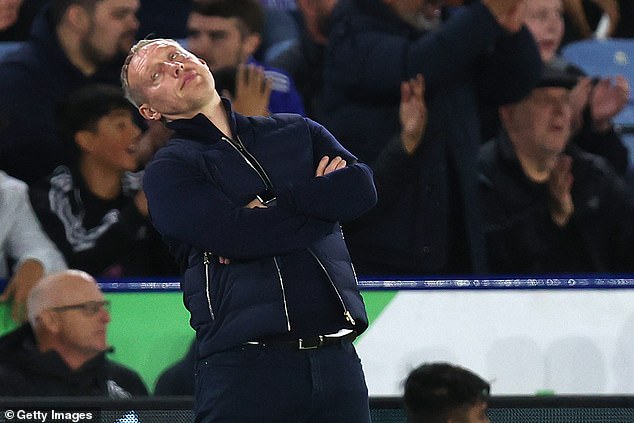 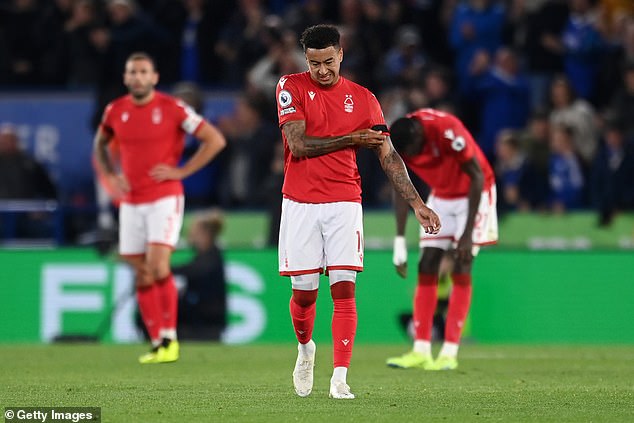 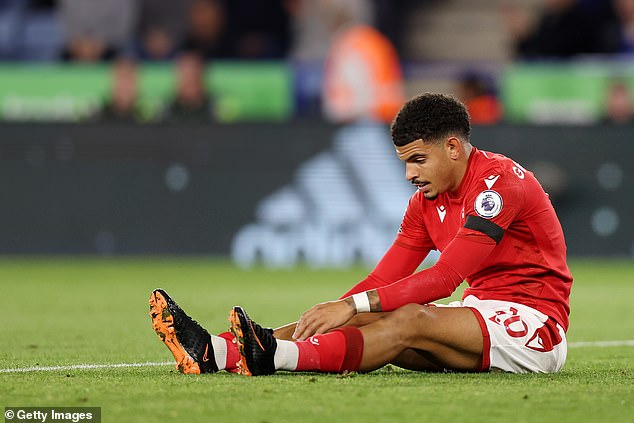 Forest shelled out a club-record £42.5million to sign Morgan Gibbs-White from Wolves

So, it’s depressingly inevitable, yet hugely frustrating, that Forest now find themselves being crushed by a ludicrous expectation by some of the fanbase and, from all accounts, the current owners.

Make no mistake, Evangelos Marinakis has not only dipped into his sizeable pockets to invest in a Premier League squad, he’s done the equivalent of Ebeneezer Scrooge on Christmas morning after his overnight epiphany – £140m and counting.

But when you’re spending more than some of Europe’s elite and you happen to be the new kid on the block (albeit with a rich and glorious history from a bygone age), you’d better hope results go your way.

Because as Steve Cooper’s finding out, delivering Forest to the promised land arguably two or three years ahead of schedule, reuniting the club with its fanbase and leaving an indelible mark as the only Reds manager to come close to touching Clough’s genius, probably counts for nothing when you lose five on the spin in the toughest league in the world.

Forget Forest are playing catch up … and I don’t mean a couple of places off the grid after a slow start. I’m talking about being almost 25 years behind established Premier League clubs. Forest broke through the ceiling when they got promoted, they upset the established status quo of the yo-yo clubs who bounce up and down courtesy of the shamefully unfair parachute payments. 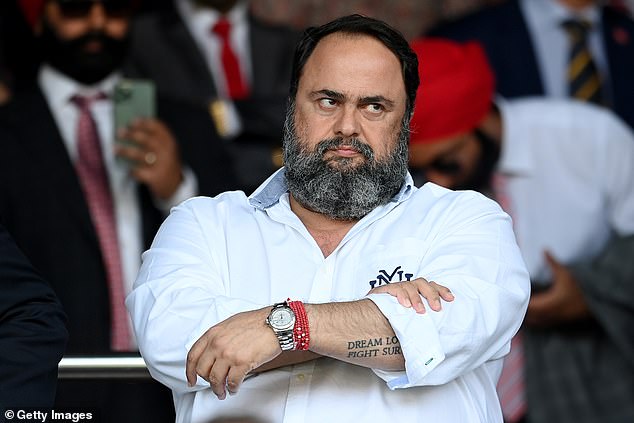 And they did it thanks to Steve Cooper.

The argument goes we should be beating Leicester who won the Premier League when Forest were finishing 16th in Championship, we should be winning matches against Fulham and Bournemouth, both with very recent PL pedigree and recipients of the parachute payments referenced above.

And so, the narrative gets skewed because perspectives get skewed. If you want an illustration of how ridiculous some football fans can be, hop on to Twitter and see some Reds supporters screaming for Cooper to go … little after a year when we were anchored to the foot of the Championship playing some of the worst football seen at the City Ground since the David Platt and Joe Kinnear eras.

But this is the game now. There are some Forest fans (and I can empathise with this) who, while revelling in the giddyness of promotion and the dreamlike state we were all in after returning to the Premier League … already pine for a regular Saturday three o’clock kick off and the comforting familiarity of games against QPR, Blackburn et al. 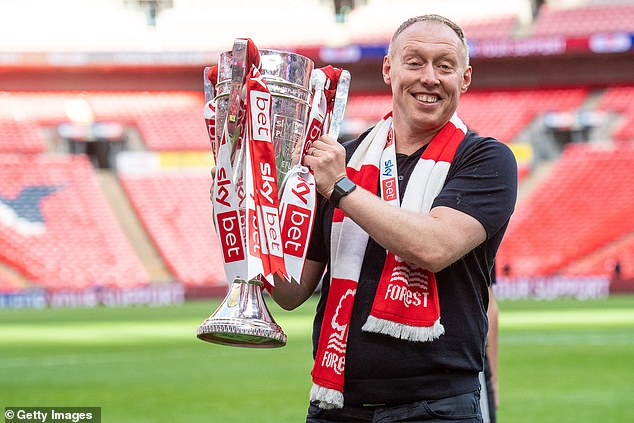 Despite winning the Championship play-off final in May, some fans are calling for Cooper to go

I believe the overwhelming majority of Forest fans want Cooper to remain in charge, I’d keep him regardless of what happens this season… and that includes being relegated and, more alarmingly for Reds supporters, failing to match Derby’s dismal worst ever Premier League points tally of 11!

You see, most Forest supporters get it. We know we overachieved last season and we did that because of Cooper. Period.

And it’s not just because of what he did on the pitch. I simply can’t articulate the extraordinary impact he has had on my club. Forget promotion for a minute – even without that, something began to stir in the autumn of last season, a spark which then ignited early in the New Year and quickly engulfed the fanbase.

It wasn’t just hope over expectation, it was a sense that a club which had long lost any semblance of identity, of connection with its supporters, a club so lost, so mired and shacked by its illustrious history and seemingly in the hands of mediocre custodians who were dismantling it brick by brick, season after season, was doomed for eternity.

Be in no doubt that Steve Cooper single-handedly grabbed Forest by the scruff of its neck and instilled a belief amongst the players and supporters – a belief we’d almost resigned ourselves as being a value only attributed to other football clubs – that we could be good once more. Not great, not world-beating, just a genuinely good football club who could play decent football. 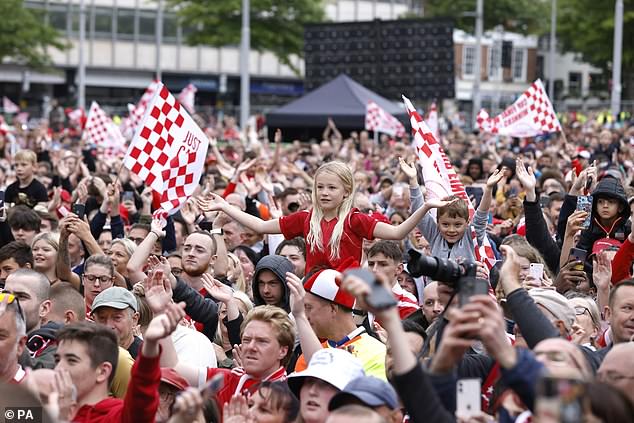 That’s what most of us want if we’re honest.

For one glorious, sun drenched 90 minutes at Wembley in May, that I guarantee will forever remain in every Forest’s fan top five life moments … Steve Cooper delivered a miracle.

Forest’s owners will want a return on their investment, however unrealistic that is, and the likelihood is Cooper will be replaced. If so, echoes of Bielsa’s sacking at Leeds will permeate through the City Ground for some time to come.

Already there are rumours of Benitez (shoot me now), Sean Dyche. Yuk!

Ultimately, football is a numbers game. Score more than your opponent, it’s as a simple as that.

Talking of numbers… those 22 players we signed in three months happens to be the same number of managers Forest had in the 10 years before they appointed Steve Cooper. 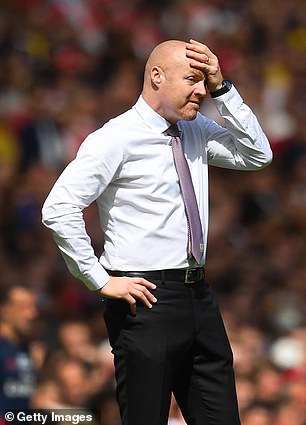 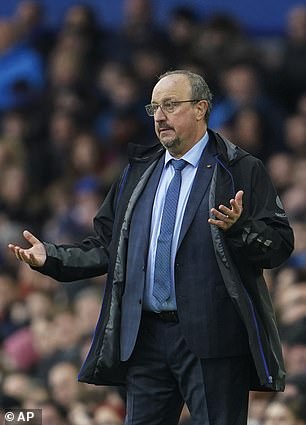 Sean Dyche (left) and Rafael Benitez are not the answers. Forest have to stick with Cooper