A Twitter user with the same name as disgraced cricketer Steve Smith woke up on Sunday morning to find his social media accounts flooded with messages of abuse.

Steve Smith, a writer for ESPN and account manager for a consultancy agency in Melbourne, was mistaken for the embattled Australian cricket captain.

He posted a collection of abusive tweets that were targeted at the cricketer he was mistaken for on Sunday, taking the messages in his stride with a dose of humour.

‘Steve Smith, I don’t care how good a batsman you are… Cricket Australia should NEVER allow you on a cricket pitch EVER AGAIN you absolute SCUMBAG,’ one wrote.

‘My feelings are officially hurt,’ he wrote, referencing the hilarious tweet.

Messages such as ‘morning you cheat, ball tampering on the agenda today,’ took over his Twitter page as cricket fans followed suit and directed their frustration at him.

The mistaken user said he ‘totally agreed’ with the one of the posts on his social media, making the most of the situation.

‘Deliberately cheating is with the ball is no better than taking performance-enhancing drugs,’ added another user, again directed to the wrong Steve Smith.

Steve Smith has come under fire after admitting he was instrumental in directing batsman Cameron Bancroft to rub a ball with sticky tape during a Test match.

Fans are demanding the captain gets the sack after the stunt, which was caught on camera and widely condemned by former legends of the game. 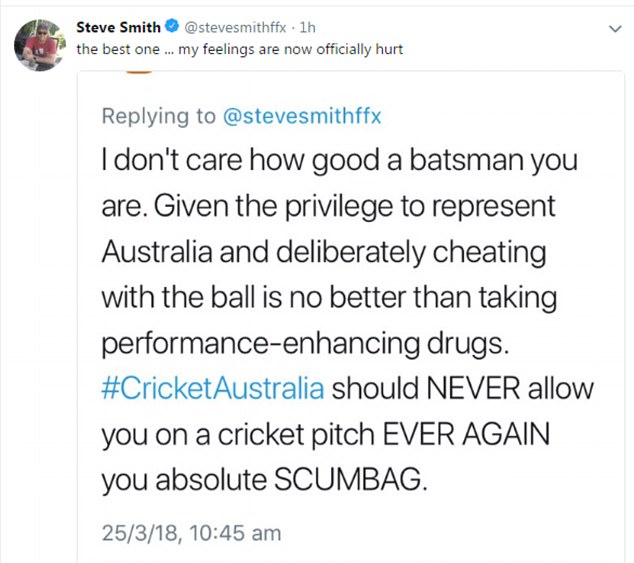 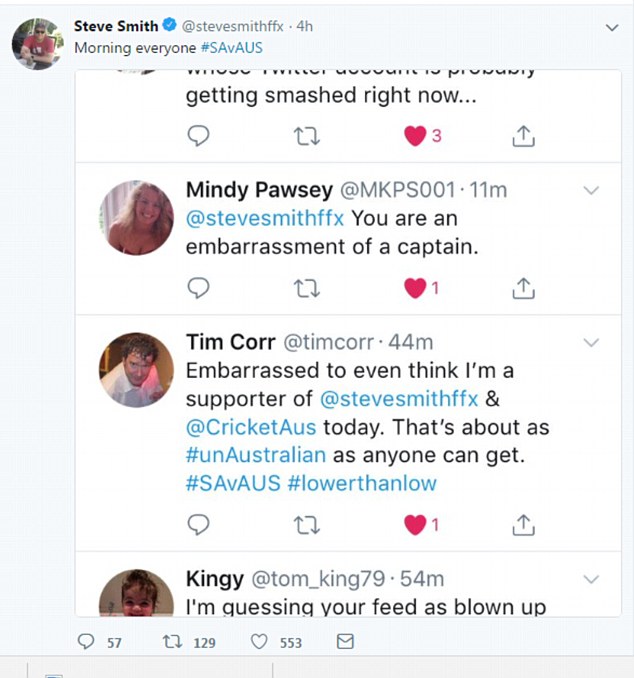 ‘You are an embarrassment of a captain,’ one user wrote to the wrong Steve Smith Messages such as ‘morning you cheat, ball tampering on the agenda today,’ took over his Twitter page