‘My players need to take note of last night’: Steven Gerrard believes his players are warned by Celtic’s shock Champions League defeat by Cluj as Rangers prepare for Midtjylland test

Steven Gerrard says Celtic’s Champions League exit should be a warning to his Rangers squad.

The Hoops saw their group stage hopes crumble after suffering a shock 4-3 defeat to Romanian champions Cluj at Parkhead.

Gers have Europa League ambitions to focus on and will now look complete the job against Midtjylland on Thursday night.

Last week’s 4-2 victory in Denmark has put the Light Blues in the driving seat but Gerrard wants his men to take note of Celtic’s fate and take appropriate action.

He said: ‘What last night shows is that European ties are never over, even when you get a positive result in the first leg.

‘Some of these teams that people don’t know much about – Cluj from Romania, for example, or Midtjylland from Denmark – they carry a huge threat.

‘They’re so desperate for financial reasons to progress, like most of us, so my players need to take note of last night and make sure we deal with our second leg much better.’ 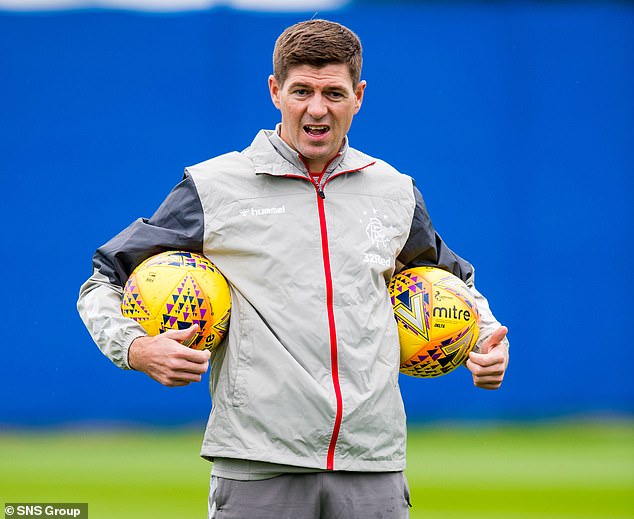 Celtic’s damaging defeat to Dan Petrescu’s side has dented hopes of Scotland’s European representatives being able to enter at a later stage.

With Scotland ranked 20th in Uefa’s ranking system, Gers and fellow Europa League competitors Aberdeen and Kilmarnock were all forced to kick off at the first qualifying round this season, as were Celtic in the continent’s premier competition.

A rise to 17th could yet see the top two in this year’s Ladbrokes Premiership start at the second qualifying round next term and Gerrard admits it is crucial the country’s top sides do their bit in Europe.

He said: ‘It’s certainly going to be detrimental because all the Scottish teams need to do as well as we can to improve the coefficient and give ourselves an advantage in these European competitions.

‘From that aspect (Celtic’s defeat) is very disappointing.

‘But for me, I’m the manager of Glasgow Rangers and my focus is on and the challenges that face us.’ 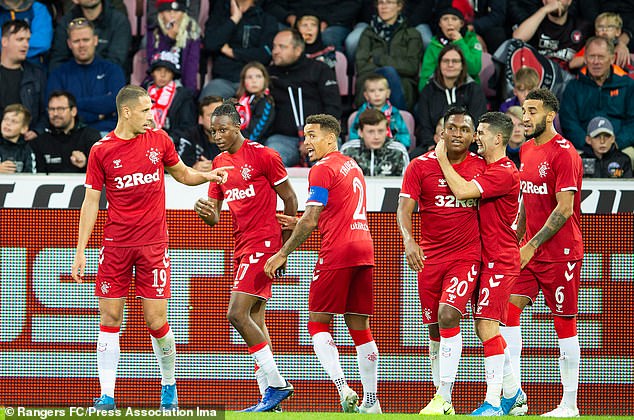 Gers raced 3-0 up in Herning last week before a brief six-minute wobble allowed Midtjylland to pull two back.

Scott Arfield restored their advantage to two goals and Gerrard now expects his men to finish the job at Ibrox.

Gerrard – whose side go in buoyant after beating Hibs 6-1 on Sunday – said: ‘We have to take a 0-0 mentality. Everything is to play for and I want to see a hungry performance.

‘This team has had so much criticism over the past 14 months about not being consistent and taking the foot off the gas at important times.

‘Tomorrow is a good test from a mental view. I don’t want to see a casual team thinking that because it has a two-goal advantage that the job is done. That won’t be the case.

‘I’ve not had to stress that because Midtjylland deserve respect and the players know that at times last week they caused us problems.

‘They carry a huge threat and it would be very immature and naive of us to think that this is done.

‘But could we be going in to the game in any better form? No I don’t think so. The players are smiling and enjoying their training.

‘We’ve got four or five players who are not happy being outside the squad and that’s pushing the lads in the matchday 18. The level of us is exactly where I want it. The challenge is to maintain that.

‘There are still improvements to come from this side, for sure. Players are still finding their feet.

‘The new players are doing well working their way in but it still takes weeks and months to gel.

‘I expect us to keep improving as the season goes along.’