A growing trend has seen pet owners who are stuck at home in the pandemic attempting to teach their dogs to speak using buttons with pre-recorded phrases.

Although the method is not new, it appears to be rapidly growing in popularity as dog owners attempt to relieve boredom and better understand their beloved furry friends.

Kaili Smalley, 27, told the Wall Street Journal that it took 18 days to get her eight-year-old German Shepherd to communicate after the New York University grad student decamped to her family home in Idaho to ride out the pandemic. 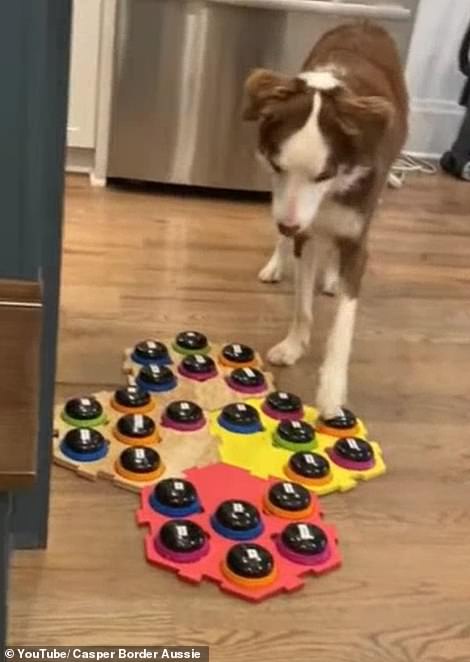 Stephanie Rocha, 51, of Atlanta posted video showing her Border-Aussie, Casper, pressing buttons to say, ‘Eleanor! No! Help! Mad!’ after her daughter Eleanor did not take the dog out for a ride as promised because of rain

Among the pioneers of the use of buttons to help dogs speak is speech-language pathologist Christina Hunger, who last year captivated pet owners with videos of her dog Stella using buttons to communicate.

Hunger told the Today Show last month that she became interested in teaching Stella to talk after she noticed that Stella’s eye contact, vocalizations and gestures were similar to the ones kids use before they can communicate verbally.

Stella is now able to use 40 different words, and Hunger is writing a book to help other dog lovers learn the method.

A Facebook group inspired by Hunger’s work with Stella, called Hunger For Words Fan Experiments, now has more than 2,400 members, with more joining every day. 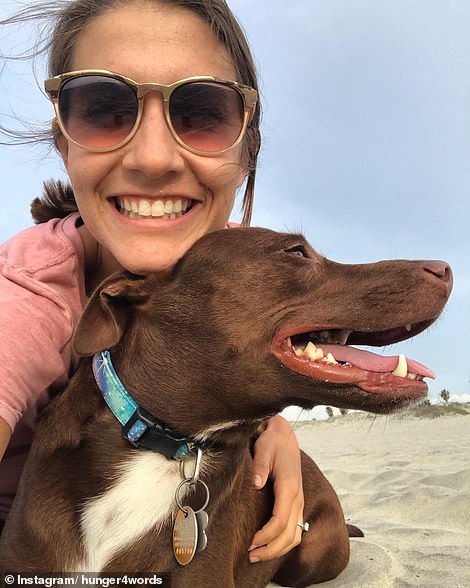 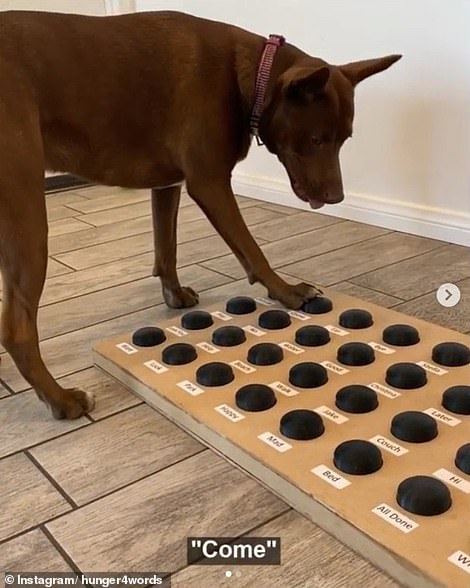 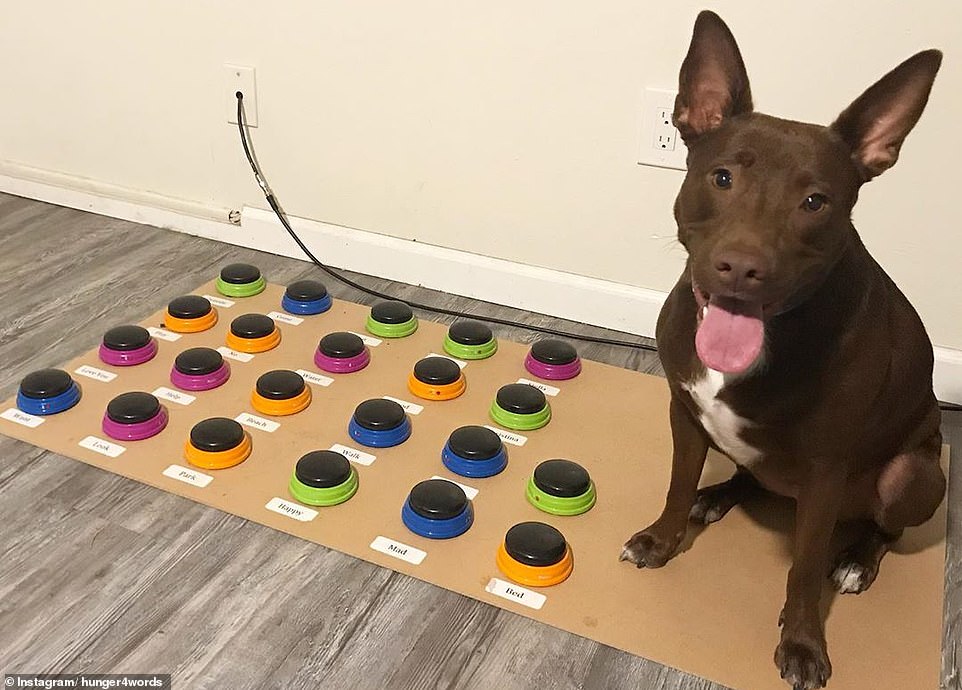 Stella is now able to use 40 different words, and Hunger is writing a book to help other dog lovers learn the method

The trend inspired Stephanie Rocha, 51, of Atlanta, who told the Journal that she began teaching her Border-Aussie, Casper, how to communicate in October.

She started posting YouTube videos of Casper using the buttons. In one, posted this summer, an upset Casper pressed the buttons to say, ‘Eleanor! No! Help! Mad!’

‘What do you need?’ Rocha said. Her daughter Eleanor was upstairs, fixing a dresser.

Rocha claims her daughter had promised Casper she would take him on a golf-cart ride, but decided to fix her dresser instead since it had started raining.

Alexis Devine, from Tacoma, Washington, has also been posting videos of her sheepadoodle, named Bunny, using pre-programmed buttons to communicate.

Bunny was introduced to the specially made communication pad as soon as she arrived at the Devine family home in September 2019.

She learned to press down on a specific button when she wanted to go outdoors.

The first word she mastered was ‘outside’ but her vocabulary now also includes ‘play’, ‘beach’ and ‘park’. 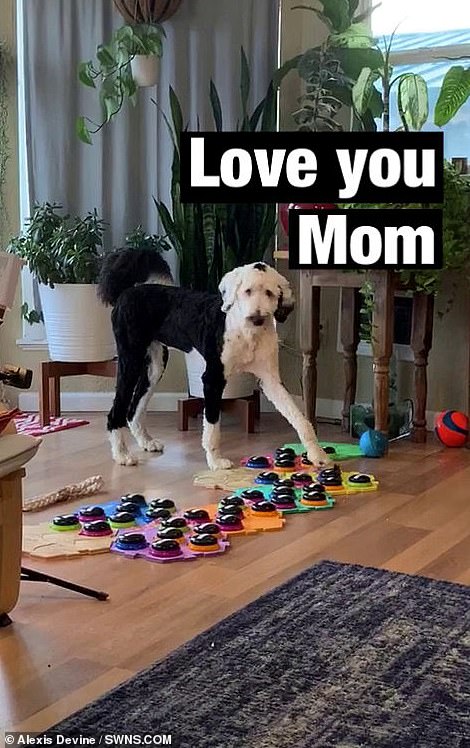 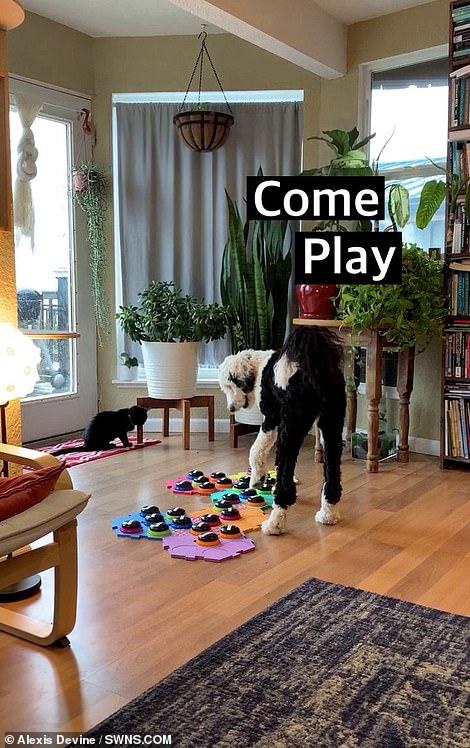 A sheepadoodle named Bunny, from Tacoma, Washington, has ‘learned to talk’ by pressing buttons on a sound board. She can say things including ‘love you mom’ and ‘come play 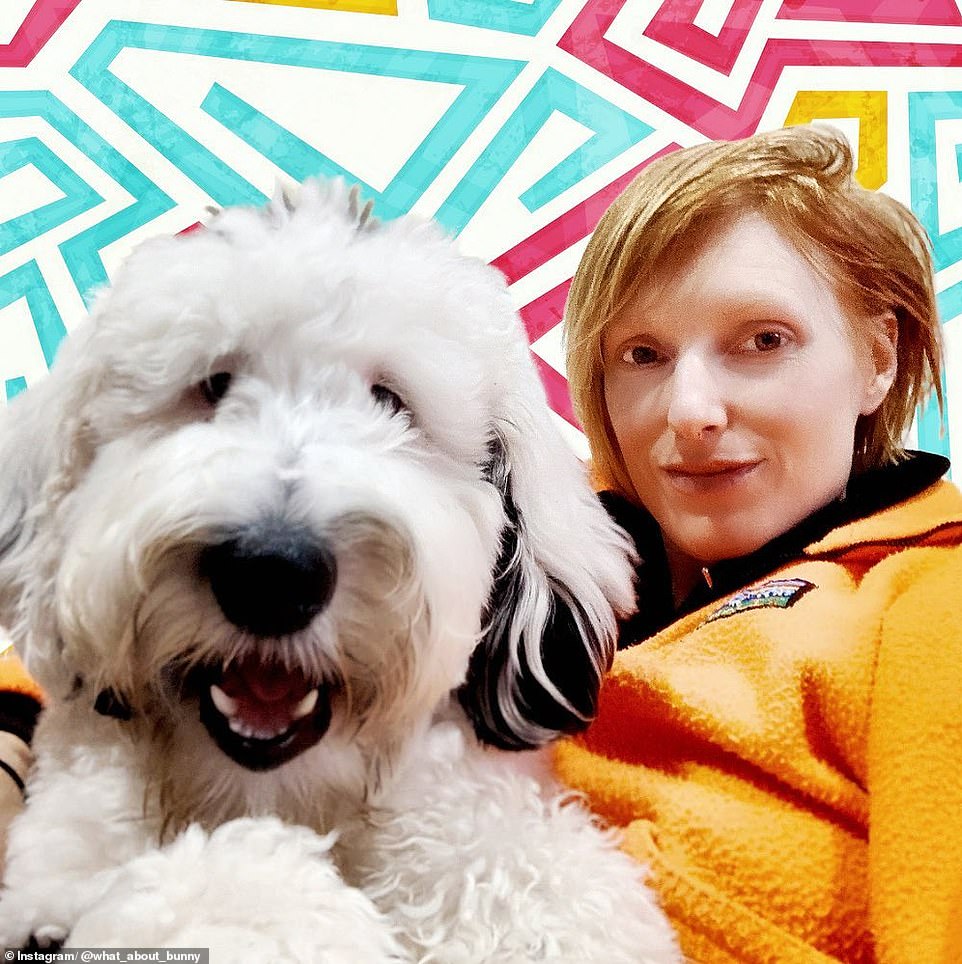 Alexis Devine, from Tacoma, Washington, has also been posting videos of her sheepadoodle, named Bunny, using buttons to communicate 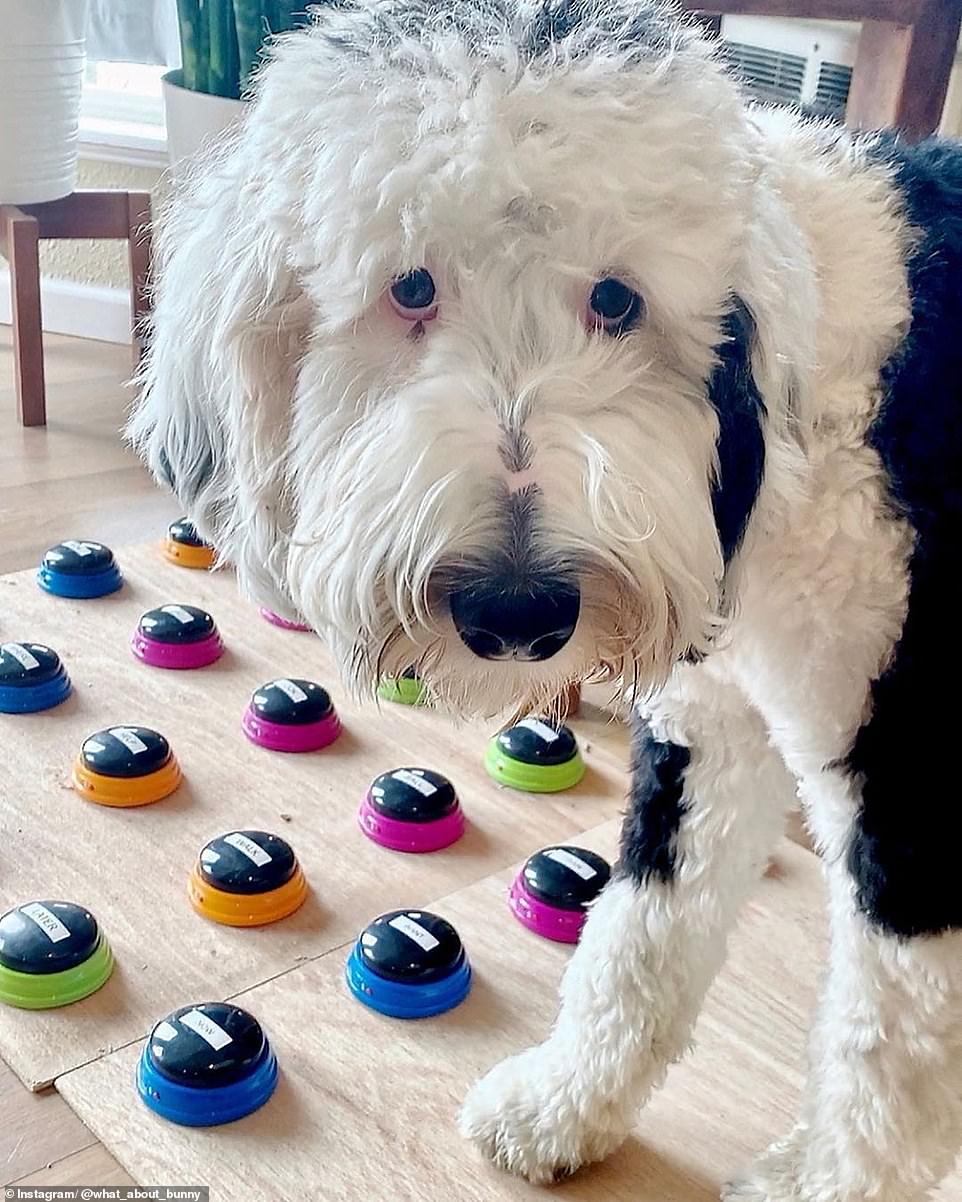 The first word Bunny mastered was ‘outside’ but her vocabulary now also includes ‘play’, ‘beach’ and ‘park’

Although experts say that dogs can be conditioned to communicate through certain practiced actions, it may not be the same as having a conversation.

Carlo Siracusa, a veterinarian specialist in animal behavior and associate professor of clinical animal behavior and welfare at the University of Pennsylvania, told the Journal that it isn’t much different from teaching a dog to ring a bell when it wants to go outside.

‘People can do it, it’s fun, but I think it’s much more important from the dog welfare standpoint that we make an effort to understand the dog’s language,’ he said.

He said there are some concepts that are difficult for dogs to grasp by pressing a button, and that it might be easier for owners to learn to read their pets’ body language to understand them.