STOCKS TO WATCH: Britain’s savviest investment couple sitting on shares worth more than £80m after good news from Serica Energy

Britain’s savviest investment couple are sitting on shares worth more than £80million after good news last week from Serica Energy.

David and Debbie Hardy, who run a Midlands building firm, are the largest shareholders in the North Sea energy producer, which pumps five per cent of the UK’s gas output.

The AIM-listed firm’s share price had nosedived ahead of Rishi Sunak’s confirmation of an extra 25 per cent levy on the profits of oil and gas producers.

Savvy: David and Debbie Hardy are the largest shareholders in North Sea energy producer Serica, which pumps five per cent of the UK’s gas output

But last week, Serica reassured investors it would use investment incentives built into the levy to reduce its tax bill.

David, 63, and Debbie, 58, bought into the business for as little as 3p a share. Can it get any better? Yes, it can. They will also enjoy a near-£1million payout after Serica increased its dividend by 18 per cent.

Informa a bellwether for how economy is performing

Informa rarely gets the pulses racing, but it is an excellent bellwether for how the economy is performing.

The company has been run for a decade by Stephen Carter, who back in 2008 was drafted in by New Labour as an adviser to try to save Gordon Brown’s dismal premiership.

Unsurprisingly, the tenure did not last long and he was back in the business world two years later. 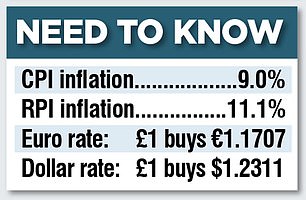 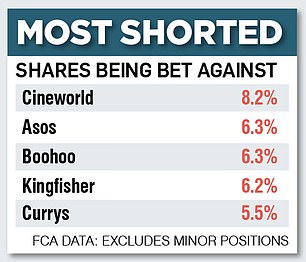 Shares have recovered since the pandemic, but now the company has to deal with soaring inflation and more belt-tightening.

Not only that, the country seems determined to get travelling again despite all those flight cancellations – perfect for the retailer’s airport shops.

The shares are well below pre-pandmeic levels.

But the model has traditionally shown resilience through tough times.

Peel Hunt says keep an eye on next week’s trading statement for evidence the ‘green shoots of recovery’ continue to grow after the chain’s promise in April of ‘meaningful profit’ in 2022.

US expansion is another string to the group’s bow.

‘There is, in our view, an outside chance of an upgrade here, which would buck the trend in retail,’ the broker says cautiously.

Even Love Island has turned its back on the industry with contestants this year wearing second-hand clothes from eBay rather than outfits from Missguided, which was recently snapped up by Frasers Group after running out of cash.

Now Boohoo will issue a trading statement on Wednesday. Optimists will be hoping it can cash in on its rival’s demise.

The other chink of light is that the holiday season is upon us – a time when young women often splash out on swimsuits and a dress or two.

But costs are rising and the Boohoo share price has been punished over the past year.

More of the same is likely.