The 20th anniversary of Diana’s death has sparked a renewed interest in the life of the late Princess with much of the coverage casting the royal family in a somewhat unfavourable light.

But it’s still business as usual for Prince Charles whose been carrying on with his routine as normal, including paying a visit to church at Balmoral this morning.

Charles is currently holidaying at the Queen’s Scottish estate with the monarch and various family members.

The royal, 68, drove himself to the service at Crathie Church and was without his wife Camilla, 70.

Prince Charles was spotted driving to Crathie Church at Balmoral this morning, where he is holidaying with other family members

It’s been a particular embarrassing time for the couple after recordings Diana made with voice coach Peter Settelen were broadcast on Channel 4, revealing how she’d battled with the knowledge that her husband was in love with another woman right from the beginning of her marriage.

I remember saying to my husband, you know, ‘Why, why is this lady (Camilla) around?’ and he said, ‘Well I refuse to be the only Prince of Wales who never had a mistress,’’,’ she told Settelen

The Queen also came off somewhat unfavourably as Diana recalled going to the ‘top lady’ for advice on how to save her marriage.

The response she received was: ‘I don’t know what you should do. Charles is hopeless.’ 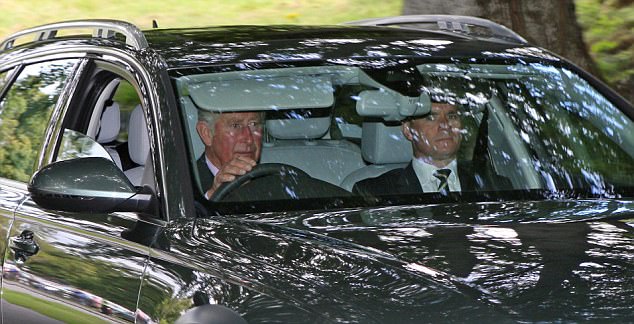 And it seemed there was little support from the Duke of Edinburgh who Diana claimed had told Charles: ‘Uh, if your marriage doesn’t work out you can always go back to her after five years.’

William and Harry have also been speaking out ahead of the anniversary of their mother’s death, including a documentary to be broadcast on BBC tonight.

Opening up on the tumultuous seven days that followed the accident, the princes give a vivid account of how they had to conceal their devastation amid the extraordinary outpouring of public grief.

Paying tribute to his father for his attempts to comfort them in the aftermath of Diana’s death, Prince Harry says: ‘One of the hardest things for a parent to have to do is to tell your children that your other parent has died.

‘But he was there for us, he was the one out of two left and he tried to do his best and to make sure we were protected and looked after.

‘But, you know, he was going through the same grieving process as well.’

Harry says his reaction to being told the news was one of ‘disbelief’, and there was ‘no sudden outpouring of grief’.