QPR 0-2 Stoke: Tyrese Campbell and Mario Vrancic score either side of half time as Michael O’Neill’s side claim all three points to move into the play-off places in the Championship

By Alex Jennings For The Daily Mail

It was always going to take something special to stop in-form QPR in their tracks on home soil, but Stoke goalkeeper Adam Davies served up a smorgasbord of stops as the visitors ran out 2-0 winners on Sunday.

The hosts had won their last three games, were unbeaten in six, and have picked up more points at home than any other Championship side in 2021. Oh, and they hadn’t gone goalless for 31 consecutive league games.

But Davies denied Charlie Austin from the penalty spot between Tyrese Campbell’s cooly-taken opener and Mario Vrancic’s stylish second, as Stoke narrowed the gap between the two playoff-chasers to a single point.

Potters boss Michael O’Neill was delighted with his keeper’s display. ‘Adam played very well,’ he said. ‘He made a couple of really good saves, particularly at the death. I’m delighted for him, he had an excellent game.

‘He’s been in a battle for the No 1 jersey (with the injured Joe Bursik). If he keeps his form like that he’ll make it difficult for Joe to come back in.’

QPR started brightly, Davies making his first smart save of the day from an Ilias Chair header. That warning shot seemed to wake the visitors up though, and QPR’s Seny Dieng was forced into a fantastic double save to deny first Campbell then Steven Fletcher, though Fletcher was later called offside.

In the 14th minute Campbell got revenge. Vrancic split the QPR defence superbly with a delightful pass, finding the striker who had timed his run to perfection. Suddenly in acres of space, Campbell bore down on Dieng before slotting home to give O’Neill’s side the lead.

The goal got Stoke into their groove with the languid Vrancic running the show, and it was telling that the normally influential Chair had been surprisingly, if fittingly, sedentary for the hosts, who struggled to assert themselves in possession. Stoke went into the break 1-0 up and in control.

Soon after it, however, Davies was forced into an acrobatic save to deny Austin’s volley, which had looked destined for the net. ‘I thought it was in,’ confessed QPR boss Mark Warburton later. ‘It was an unbelievable save.’

QPR were handed a lifeline after 61 minutes when Vrancic inexplicably dragged Yoann Barbet to the floor and referee Tony Harrington pointed to the spot. But Austin’s penalty was weak, and Davies stopped it impressively, diving low to his right. 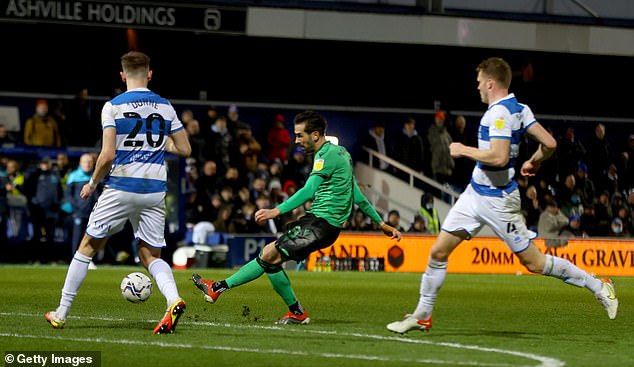 Warburton was philosophical about Austin’s misfire. ‘No one means to miss a pen. Charlie’s scored his last 15, everyone is human. Those are the fine margins of the Championship.’

It proved a gift the hosts couldn’t afford to spurn. A quarter of an hour later, Vrancic collected the ball in space 35 yards out from goal.

The Bosnian took a few touches, before curling the ball past a despairing Dieng and winning redemption for his earlier moment of madness.

Not to be outdone, keeper Davies had one more stunning stop to make — denying substitute George Thomas when a goal looked inevitable. A clean sheet that was earned — and then some — for the Welshman, as Warburton’s men were reminded of defeat’s singularly bitter taste. 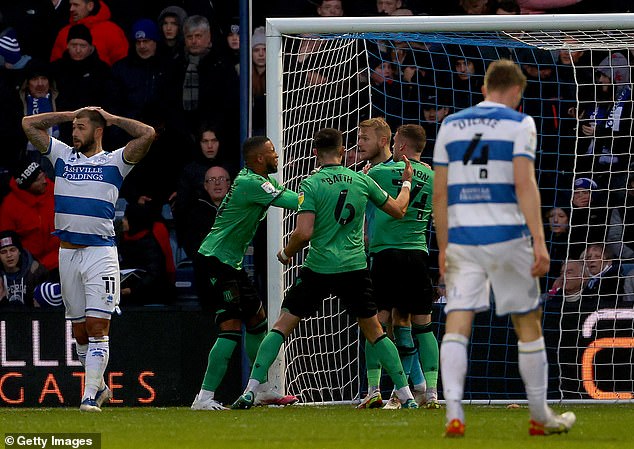