Stolen Swedish royal artefacts worth £5.5 million ‘are found dumped in a trash can’

Stolen Swedish royal artefacts worth £5.5 million including two 400-year-old crowns and an orb ‘are found dumped in a trash can’

Swedish royal treasure from 1611 that was stolen last year from a cathedral has been found, officials have revealed.

Police said in a statement that ‘all seems to indicate King Karl IX’s stolen funeral regalia have been found in the Stockholm area.’

According to Swedish newspaper Aftonbladet, the treasures were found in a dustbin – on which someone had written the word ‘BOMB’.

After spotting the bin a security guard became curious and found a number of items believed to be the stolen jewels inside.

Surveillance cameras in the area are now being checked to see if any people involved were caught on film.

According to investigators, more details will come ‘when we know for sure if it is the stolen regalia.’

The stolen artifacts included a gold crown and an orb dating to 1611 that were made for King Karl IX’s funeral, as well as a jewel-encrusted crown dating to 1625 that was used in Queen Kristina’s funeral. The items were on display at an exhibition, and visitors were inside the cathedral when they were taken.

A 22-year-old Swedish man is standing trial on accusations of stealing two crowns and an orb from the Strangnas Cathedral, west of Stockholm om July 31, from an alarmed display after the glass was smashed.

The defendant, a 22-year-old Swedish national, who was arrested on September 12, has not been publicly identified. 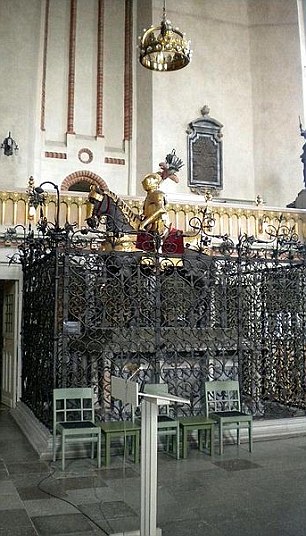 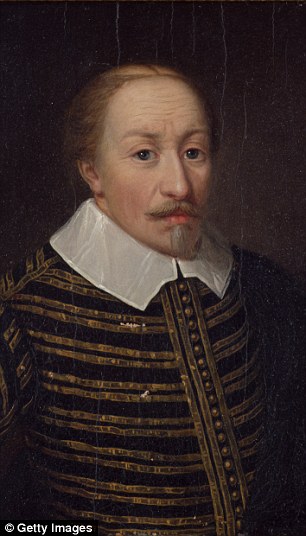 The cathedral was open to the public when the jewels were stolen, Aftonbladet reported. Pictured left: The grave of Karl IX at the cathedral. Right: The king himself

A second man has been detained but not charged over the haul said to valued at 65 million kronor (£5.5 million).

The stolen artefacts are so-called funeral regalia, which are placed inside or on top of a coffin to symbolise a deceased royal’s identity and social ranking.

While some funeral regalia are kept in the cathedrals of Strangnas, Uppsala and Vasteras, Sweden’s crown jewels are in vaults under the Royal Castle in Stockholm.

The daytime robbery took place in August last year as thieves smashed a security case and stole the jewels before hopping on bicycles and escaping via a nearby lake, police said.

At the time it was believed that two men pulled off the heist at Strangnas Cathedral and vanished aboard a speedboat or jet skis into the vast patchwork of lakes around the city, located 60 kilometers (37 miles) west of the Swedish capital of Stockholm.

‘The alarm went off when the burglars smashed the security glass and stole the artifacts,’ Catharina Frojd, a spokeswoman for the 14th century cathedral, said back in August

Strangnas Cathedral said on its website that the stolen pieces were kept ‘in accordance with the prevailing safety regulations in locked and alarmed displays.’ It gave no further details.

Police sent out a helicopter and boat to hunt for the thieves but found nothing.

Tom Rowell, a visitor who was eating lunch outside the Lutheran church, said he saw two men running from the cathedral toward a small nearby jetty where a motorboat was moored.

‘The two men hurriedly jumped on board and it sped off,’ Rowell said, adding that they ‘appeared non-Nordic.’ He didn’t elaborate.

However, police spokesman Stefan Dangardt said ‘witnesses’ testimonies varied quite a bit’ and it was also possible the thieves escaped on jet skis. 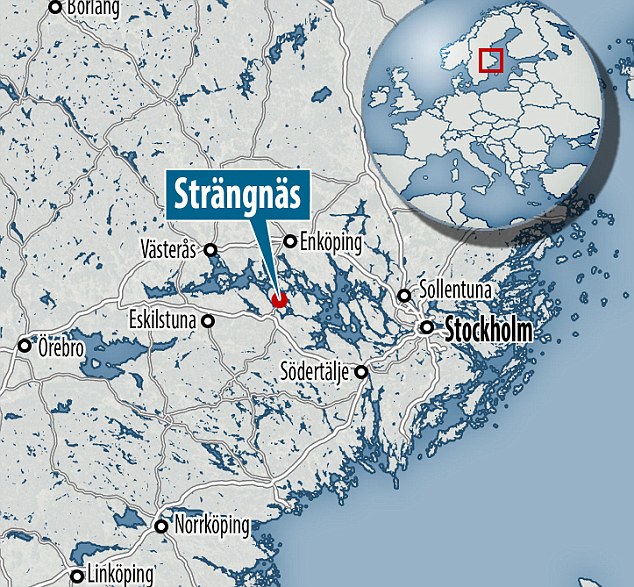