Stomach-churning footage shows the gruesome moment a Vietnamese ant was sucked out of a man’s ear.

The unnamed man arrived at a hospital in the city of Hải Dương – around 46miles (75km) from Hanoi – on December 6, claiming to have woken with what felt like an insect crawling and even biting the inside of his ear.

A medic, known only as Dr Hoat, found a black ant rummaging around the patient’s ear canal ‘searching for food’ and believes he probably mistook it for a cave.

Gruesome footage shows the doctor pulling the insect out with a pair of tweezers.

Stomach-churning footage shows the gruesome moment a Vietnamese ant was sucked out of an unnamed man’s ear at a hospital in the city of Hải Dương – around 46miles (75km) from Hanoi – on December 6. He claimed to have woken with the feeling a bug was crawling in there

The video begins with Dr Hoat using an endoscope to confirm it is an ant crawling in the man’s ear, with the insect being fairly deep within the canal.

Worried the bug may damage the sensitive ear drum, Dr Hoat uses a light to try and coax the ant out.

When that does not work, the medic tries gently nudging the insect towards the ear’s exit with tweezers, with it initially crawling further away.

The medic manages to get a handle on the ant and swiftly removes it, before showing the pest to the patient.

The baffled man asks ‘how could it crawl into my ear?’, but the doctor gave no explanation.

Professor Coby Schal, who studies insects at North Carolina State University, previously told the National Geographic: ‘It’s actually not an uncommon phenomenon to have a cockroach in the ear.

‘Roaches are searching for food everywhere. And earwax might be appealing to them.’

A 29-year-old woman from Florida was even told by her ear, nose and throat (ENT) specialist that he extracted bugs from people’s ears around once a month after a cockroach became stuck in her’s for more than a week. 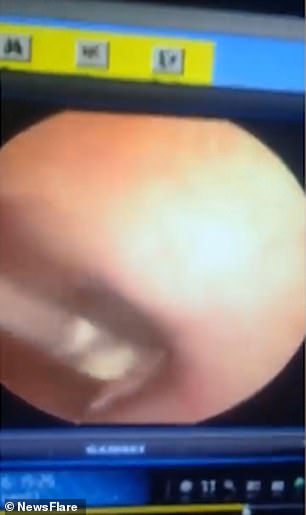 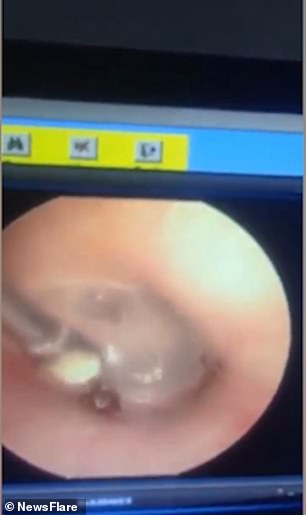 A medic, known only as Dr Hoat, believes the ant thought the man’s ear was a cave and crawled in searching for food. After unsuccessfully trying to use a light to coax the insect out, Dr Hoat then nudged the bug out with tweezers (seen left) before getting a grasp on it (right)

He even added she was the second incident he had been forced to deal with that day.

It can be possible for someone to remove an object from their ear themselves, according to the US non-profit healthcare organisation Mayo Clinic.

But tools or implements should not be inserted into the ear canal in case it pushes the object farther in.

The website suggests tilting the head to encourage the object to fall out or, if it is an insect, pouring a small amount of mineral, olive or baby oil into the ear could float it out.

However, this should not be tried in children or if the eardrum might be perforated, which could lead to pain or bleeding.

COCKROACHES FOUND IN EARS BECAUSE THEY GO LOOKING FOR FOOD

There have been recent cases of cockroaches getting stuck in people’s ear canals.

In one, an unnamed woman in Guatemala visited a volunteer fire station near her house complaining of dizziness and headaches.

On closer inspection medics there found a dead cockroach lodged in her ear and removed it with tweezers.

They posted a video online of the grotesque removal with the caption ‘You will sleep well tonight!’

A Florida woman also made the same  stomach-churning discovery, and doctors didn’t manage to remove the entire insect for nine days.

One expert told National Geographic in 2017: ‘It’s actually not an uncommon phenomenon to have a cockroach in the ear.

‘Roaches are searching for food everywhere, and earwax might be appealing to them.

‘A roach could go in to explore and then get stuck.’