An unlicensed and uninsured ‘stoned’ teenage driver has been detained for more than four years for killing his friend in a high-speed crash – as his victim’s mother broke down in court.

Jake Buckle, then 17, had smoked cannabis and hit speeds of between 86mph and 96mph on a 50mph road when he failed to negotiate a gradual bend and crashed into trees in at 2.20am in April 2018.

He fled the scene, on the A38 in Moreton Valence, Gloucester, leaving behind fatally injured passenger Jordan Maxwell, 21 – although he handed himself in to police hours later.

Mr Maxwell had been thrown from the passenger seat of the Mazda 6 saloon and was declared dead a short time later.

Gloucester Crown Court heard the crash happened at 2.20am on April 22 last year on the A38 in Moreton Valence.

‘Jordan was my special boy. I loved him so much. I can’t imagine life without him.

‘He was a rock in the family. His death has devastated us. As a mother it’s been hard.’

Mrs Maxwell turned to Buckle in the dock flanked by three officers and asked: ‘Why did you do this?’

‘Why did you leave him? We took you in, you were his friend. You have destroyed everything. Our family has been destroyed.’

A statement from Douglas Maxwell, Jordan’s grandfather, spoke of the family’s loss and said they had been completely overwhelmed by the response of so many of his friends, many of who had attended Jordan’s funeral.

He added: ‘We are trying to cope without him. There is no more laughter or corny jokes, just memories.’

David Scutt, prosecuting, told the court: ‘The defendant left the scene leaving one shoe behind in the wreckage.

‘The scene was discovered by two other motorists and the emergency services were called by them shortly after.’

The court heard that a third friend, Sam Stone, was also in the car that night but had been dropped off an hour before the collision.

Mr Stone told police they had all smoked cannabis that evening and claimed the defendant had taken three lines of cocaine as well.

‘He drove fast and erratically and was regularly told to slow down by Mr Stone and Mr Maxwell,’ Mr Scutt said.

‘On that occasion, the evening of April 21, the defendant also took three lines of cocaine and that made him hyper and driving erratically.’

Mr Scutt added: ‘There was speed, impairment through drugs and there is a history of erratic and fast driving.’

Blood tests taken after Buckle’s arrest showed he was four times the legal drug-driving limit for cocaine and two-and-a-half-times the limit for cannabis.

He later told police the crash had been caused after he fell asleep at the wheel and when he woke up and saw Mr Maxwell, he ‘panicked’ and fled. 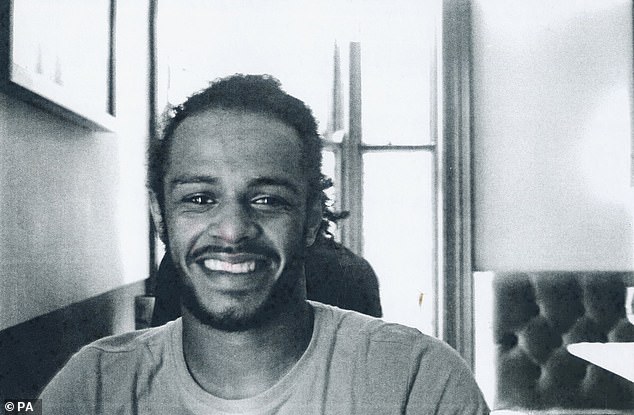 Mr Maxwell, 21, had been thrown from the passenger seat of the Mazda 6 saloon and was declared dead a short time later. The crash occurred on April 22, 2018, on the A38 in Moreton Valence, Gloucester

The court heard Buckle had only turned 17 two weeks before the crash and had only recently bought the car, which he had registered with the DVLA using a false name.

Matthew Harbinson, defending, said Buckle accepted he had smoked cannabis hours before the crash but denied using cocaine that night.

He added that Buckle had suffered a difficult childhood having been taken into care.

‘You should not have been driving and it would have been obvious to you that you were not qualified to drive,’ the judge said.

‘You had no licence and no insurance and had also submitted the paperwork for the ownership of the car in the name of another person to avoid getting speeding tickets.

‘You were under the influence of cannabis when you came to have that accident and Mr Stone describes you as being ‘hyper’.

‘Whatever the precise amounts of drugs in your system that would have had an impact upon the manner and quality of your driving.

‘You left the scene of the collision and whatever the reason that was an act of cowardice on your part.

‘No matter the difficulties you have had in your youth and the problems you have had growing up, your maturity does not even begin to come into play when you make a series of conscious decisions to breach the law in the way you did.

‘It may explain it, but it does not excuse it.’

‘You are responsible for Jordan’s untimely death. I have been touched by the evidence given by Jordan’s mother.’

The judge went on to slam Buckle for using cannabis before driving.

‘Another passenger Sam Stone gave evidence about your driving in the hours before the crash.

‘He describes driving around Stroud whilst smoking a spliff. You were under the influence of drugs. He is lucky he got out of the car before the accident.

‘You stated you fell asleep at the wheel. Whatever the mechanics of drugs you had in your body you were stoned.

You were inexperienced and travelling at speeds of between 86mph and 96mph at the time of the collision in a 50mph speed limit.

‘You collided with some mature trees and Jordan was ejected from the vehicle. You got out of the car with little injury and panicked and left the scene and went to a friend’s house in Quedgeley.

‘You did however surrender to the police later that morning and made a variety of admissions.’

Buckle was also banned from driving for five-and-a-half years and ordered to take an extended driving test.

As the sentence was announced, an uproar erupted from the public gallery.

The judge also ordered for the forfeiture and destruction of the wrecked vehicle.

The judge then spoke in private to the victim’s family.