Stoners across the country and around the world have gathered to celebrate April 20, or 420 Day, the annual high holiday of marijuana.

Pot heads congregated on Friday in Colorado, California and other states where the drug is legal to toke up in public for what is known as the ‘Christmas of weed’.

Though the origins of ‘420’ as numerical code for smoking marijuana are fuzzy and disputed, some believe it originated with a group of high school friends in 1970s California, who would meet up at 4.20pm to smoke weed after classes.

In California, it marked the first 420 Day since the state legalized recreational pot at the beginning of the year. 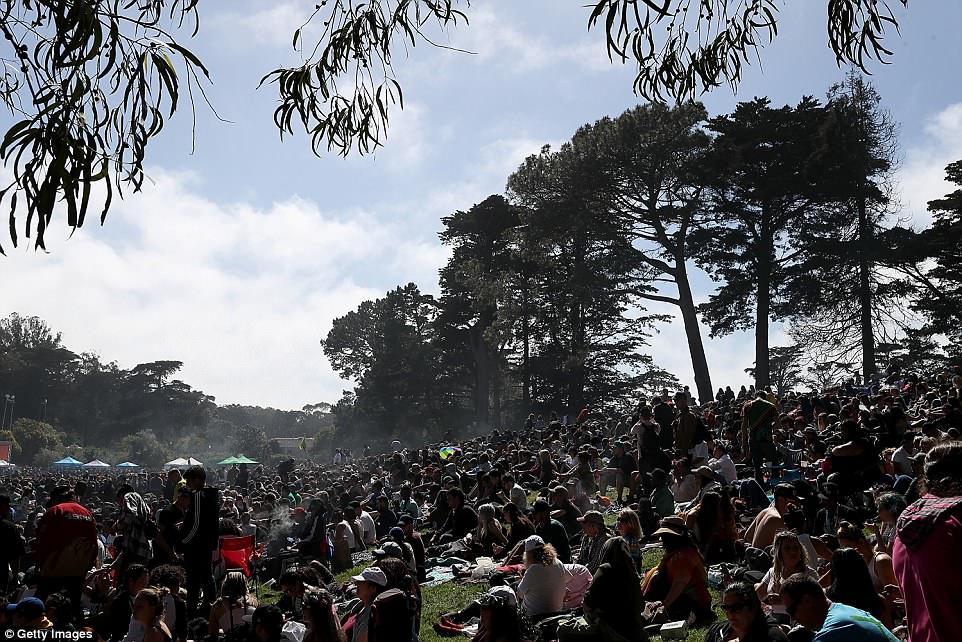 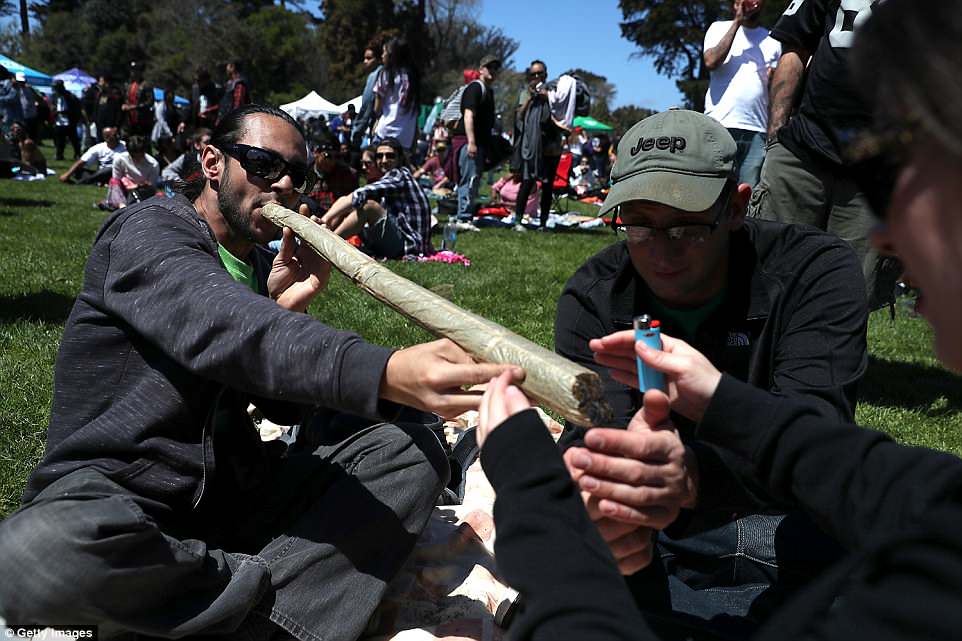 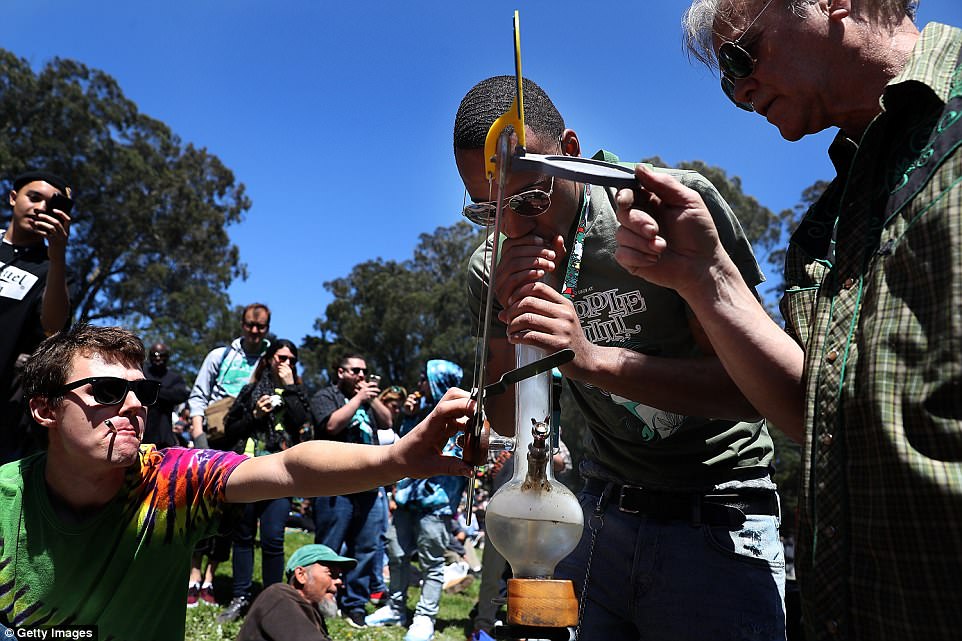 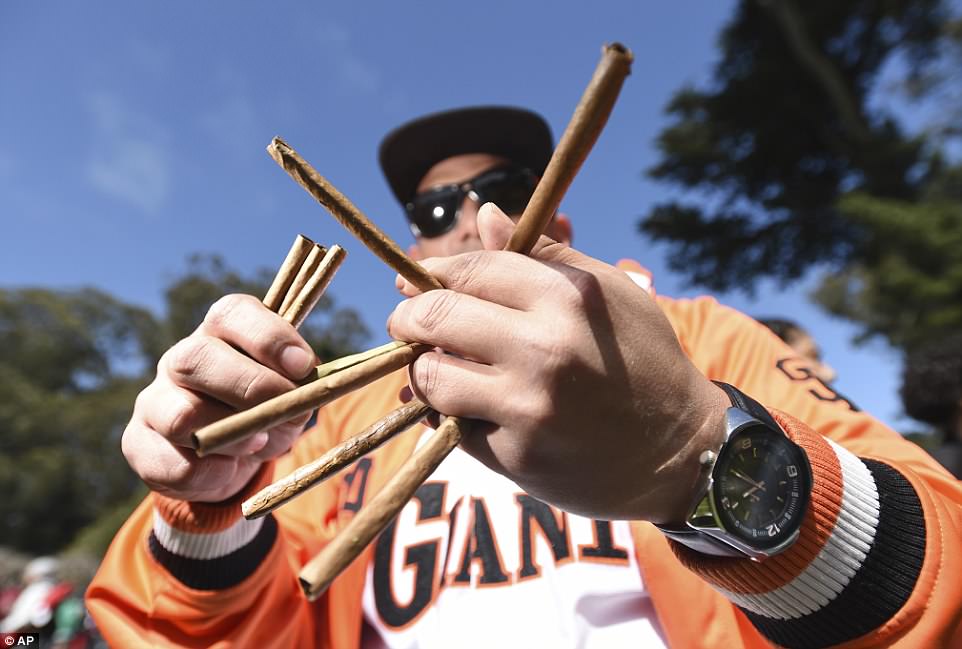 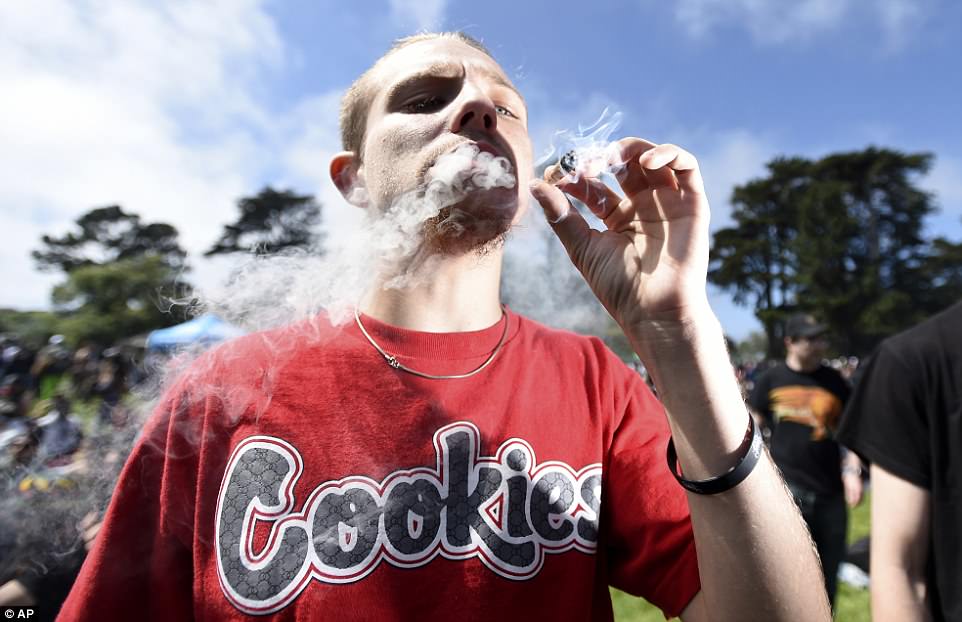 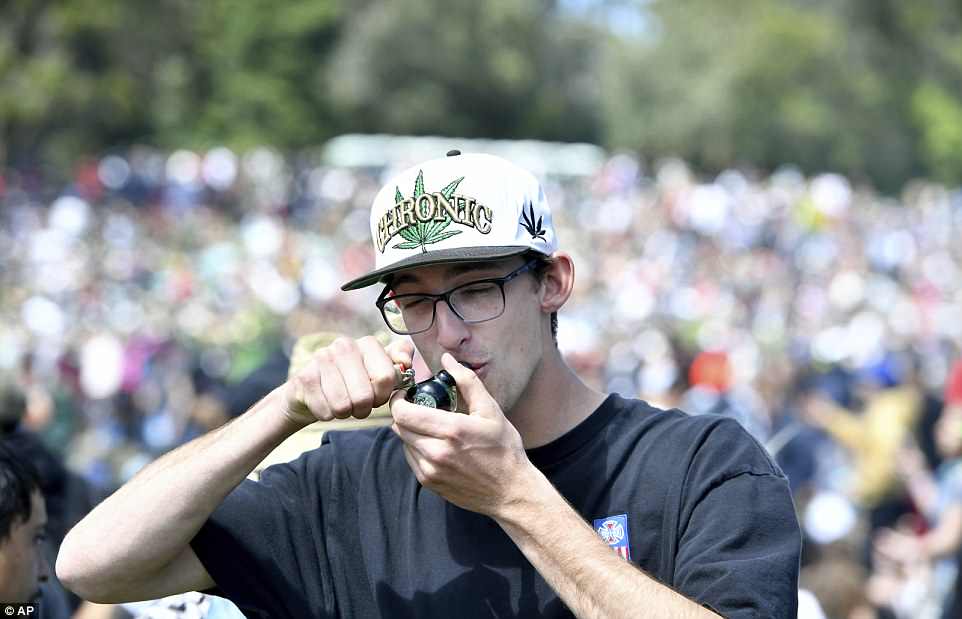 A man who only gave his name as Bryan smokes a joint on Hippie Hill in San Francisco on Friday. The gathering was the first since California enacted broad legalization of marijuana on January 1 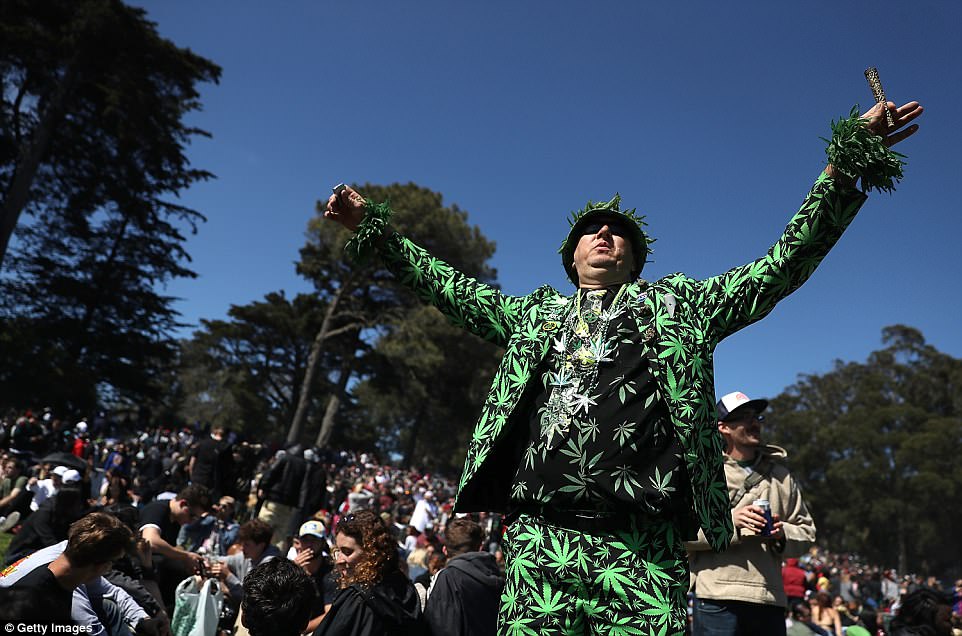 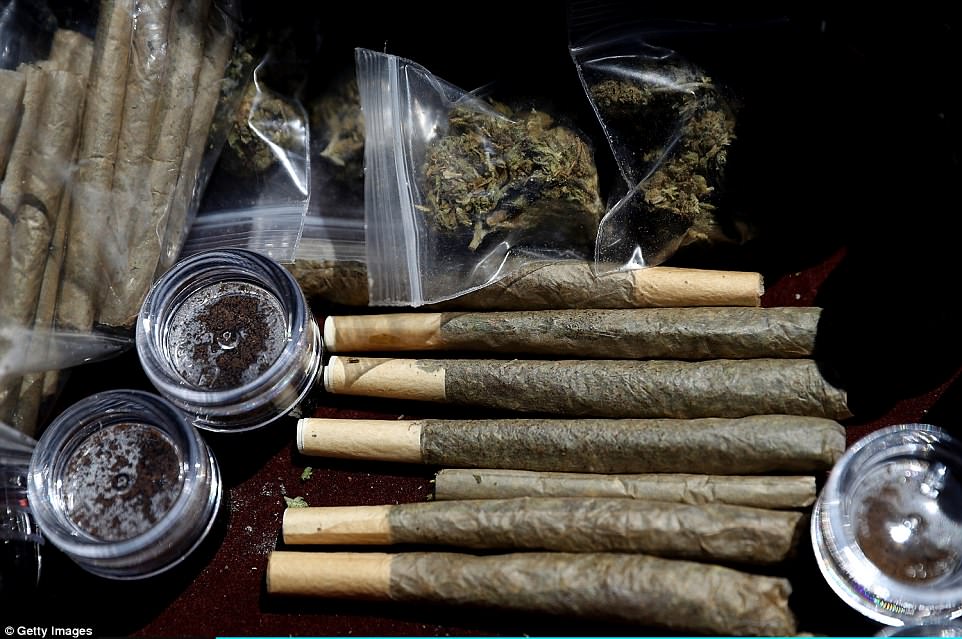 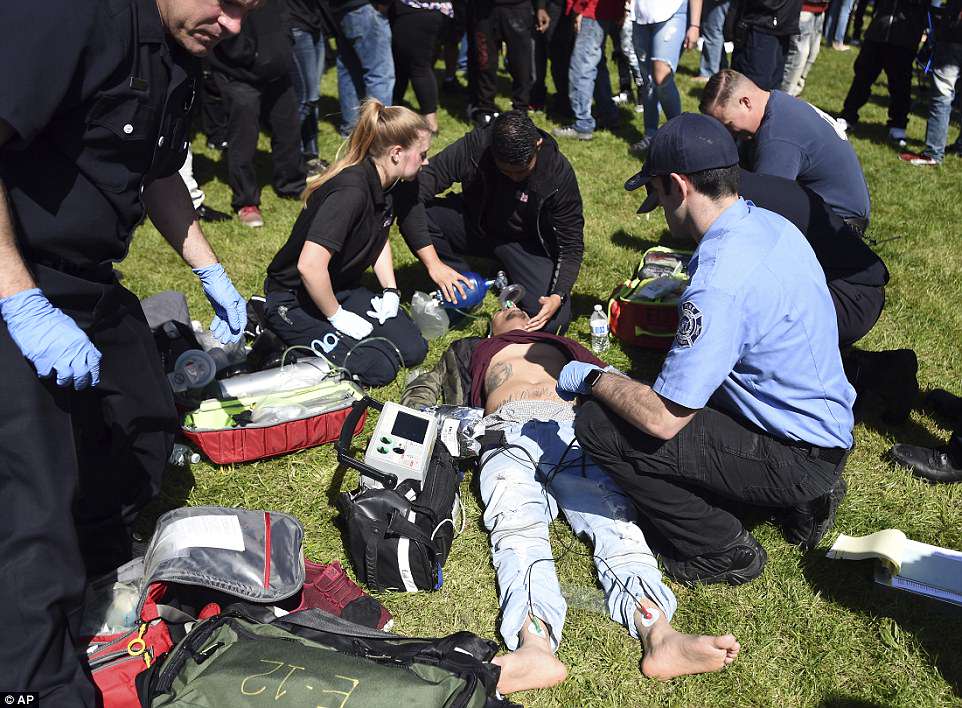 An unconscious man is attended to by paramedics in San Francisco on Friday, harshing the mellow of nearby celebrants

Thousands gathered on ‘Hippy Hill’ in San Francisco’s Golden Gate Park for the celebration, with the crowd all sparking their joins simultaneously at precisely 4.20pm.

There, what was once a small informal gathering has blossomed into a full-blown festival with corporate sponsors and commercial booths selling smoking devices, t-shirts and food.

Although public consumption of marijuana is still technically illegal in California and other states where the drug is legalized, authorities couldn’t help but turn a blind eye as the massive crowds partook.

It wasn’t all fun and games on Hippy Hill, though, as paramedics were seen attending to an unconscious man sprawled shoeless on the grass.

In Denver, overcast skies didn’t discourage the crowds from attending the Mile High 420 Festival, where Lil Wayne, the Original Wailers and Inner Circle were all scheduled to perform. 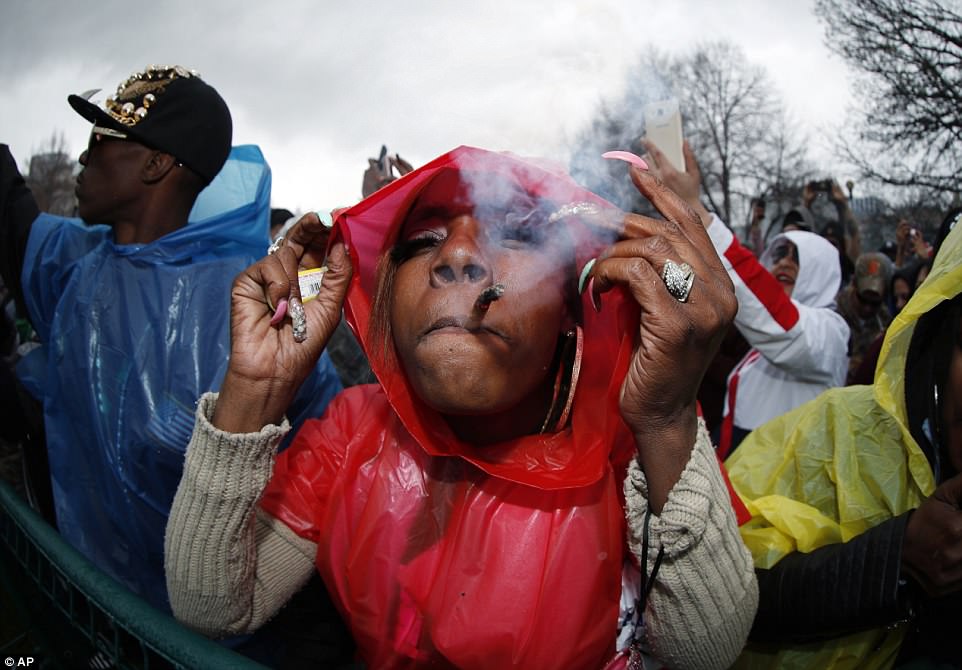 In Denver, Lanika Rhea celebrates at 4.20pm by lighting up marijuana during the Mile High 420 Festival on Friday 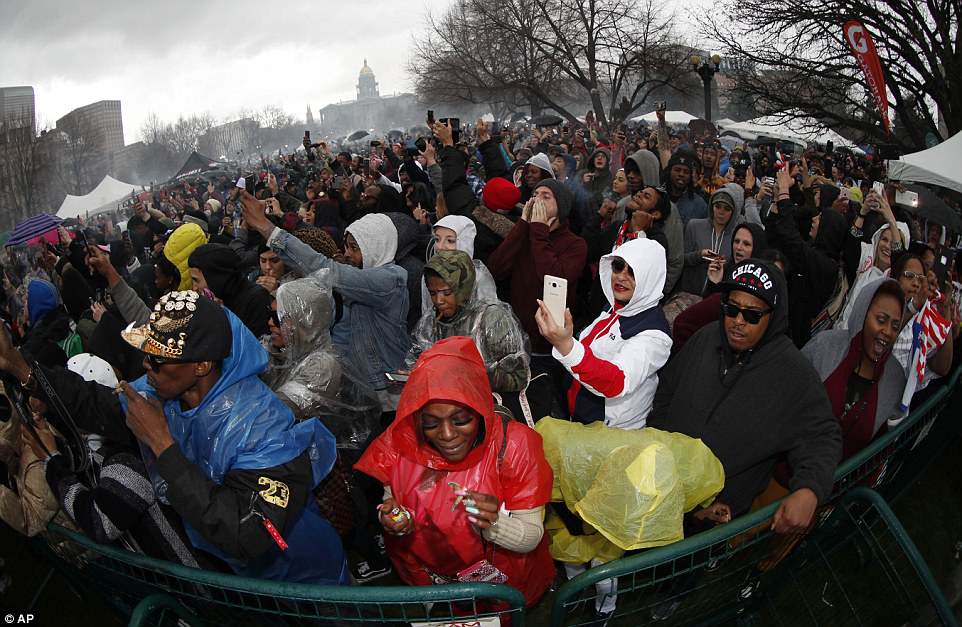 Overcast skies didn’t discourage the crowds from attending the Denver festival, which expected up to 50,000 attendees 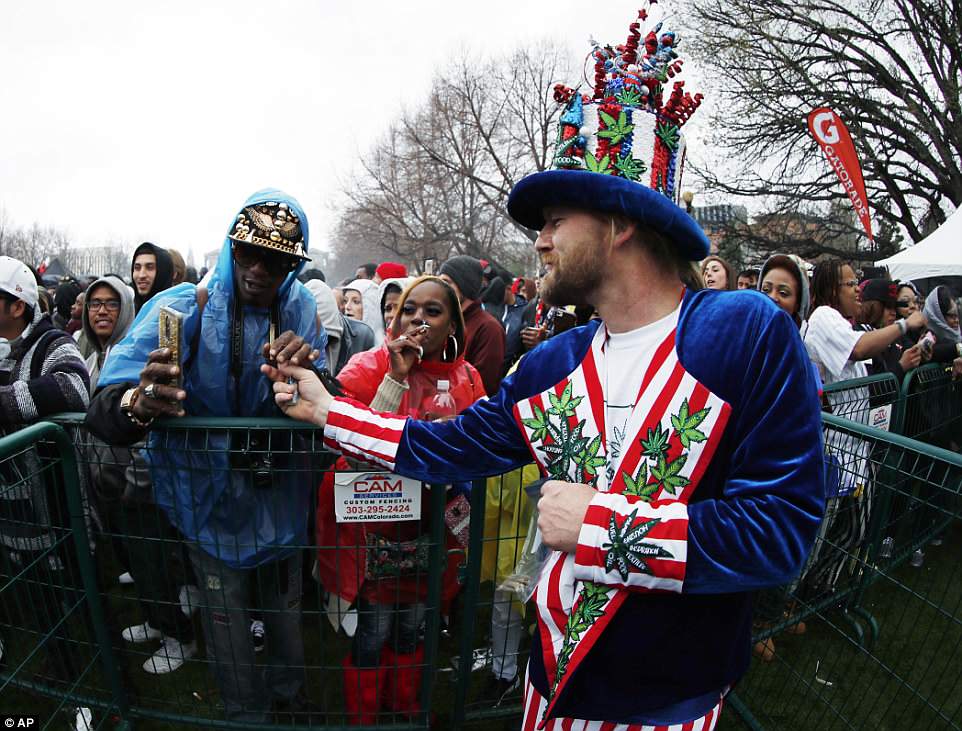 A promoter of marijuana legalization, Patrick Bettis of Illinois (right), hands out a joint to Larnell Rhea in Denver on Friday 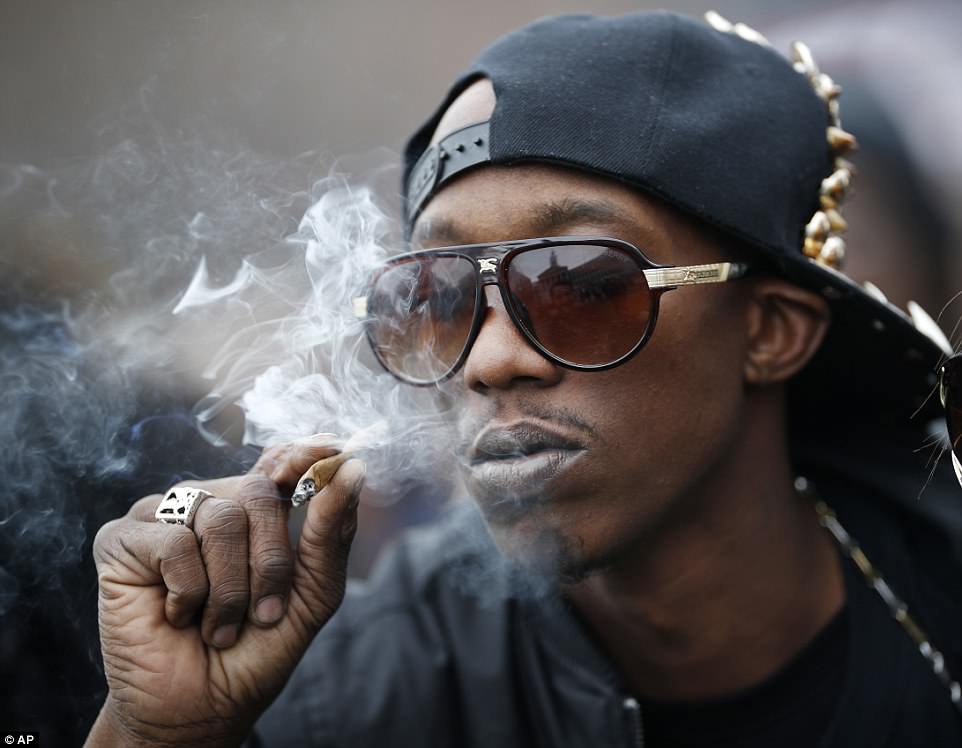 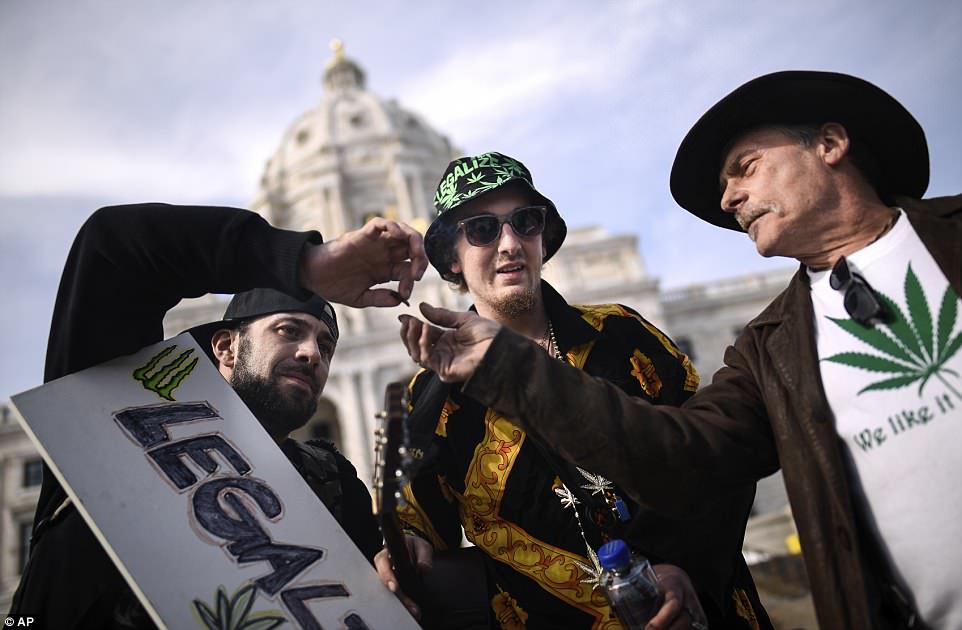 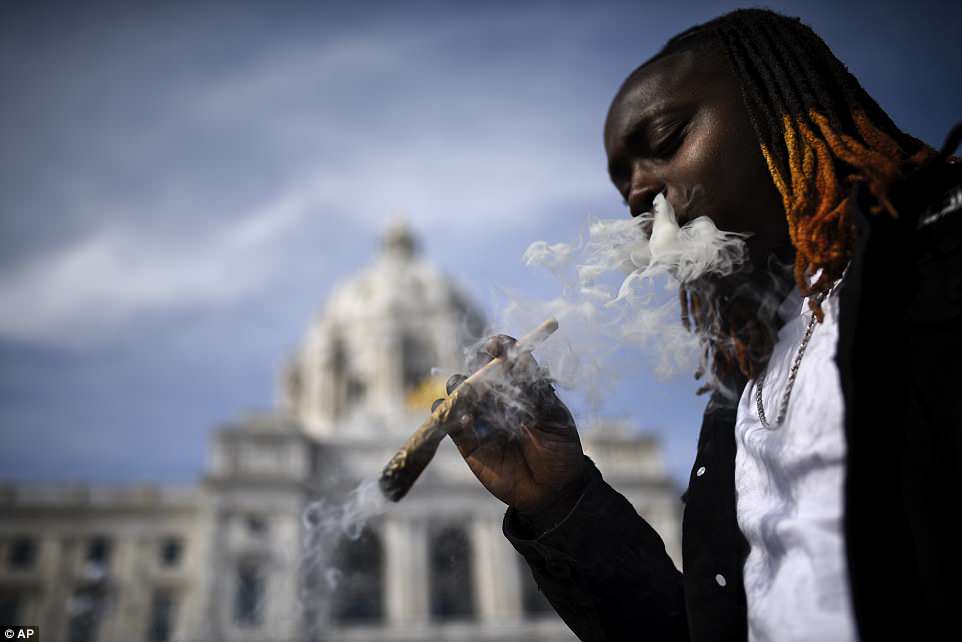 The Denver event drew bad publicity and a permit ban for prior organizers last year, after leaving a trash-strewn mess in its wake.

New permit holders Euflora, a growing chain of dispensaries, are trying to put a friendlier face on the gathering, with the promise of yoga and increased security this year.

‘We want this to look great for the city of Denver and state of Colorado, and we know the world is watching,’ said Bobby Reginelli, Euflora’s marketing director, told the Denver Post.

The celebrations were not confined to the US. In Canada, huge crowds turned out in Ottowa, Ontario for 4/20 merriment. 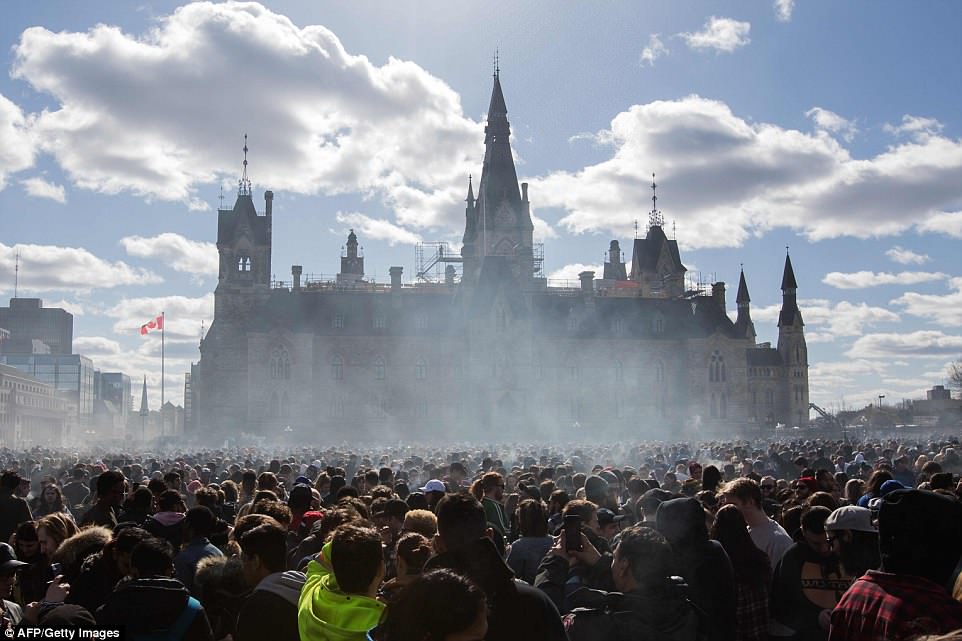 Smoke lingers over Parliament Hill as people smoke marijuana during the annual 420 Day rally in Ottawa, Canada on Friday 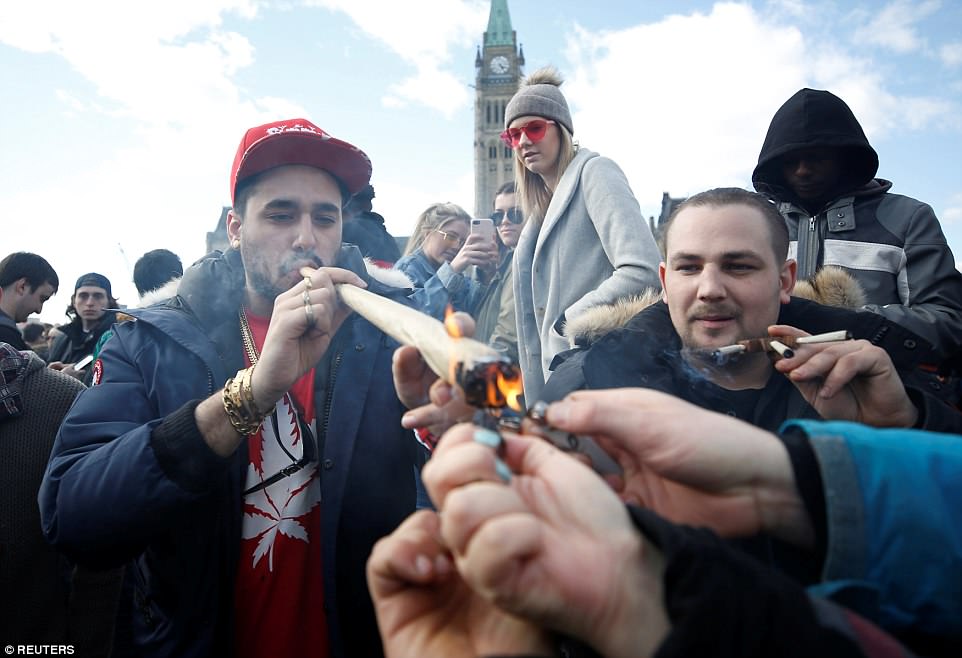 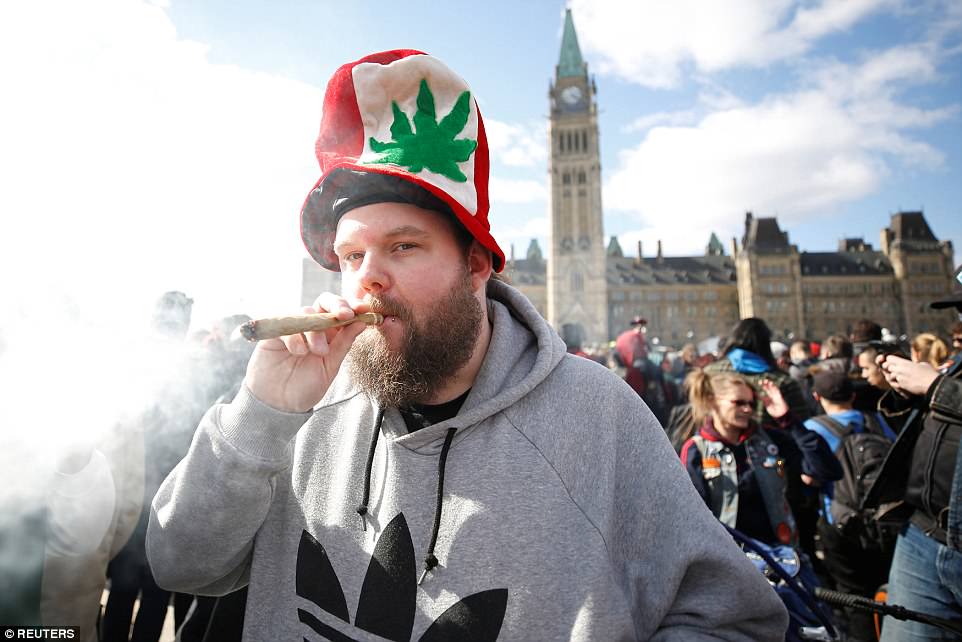 A man smokes marijuana in Ottowa on Friday. Canada’s federal government is legalizing pot across the country later in 2018 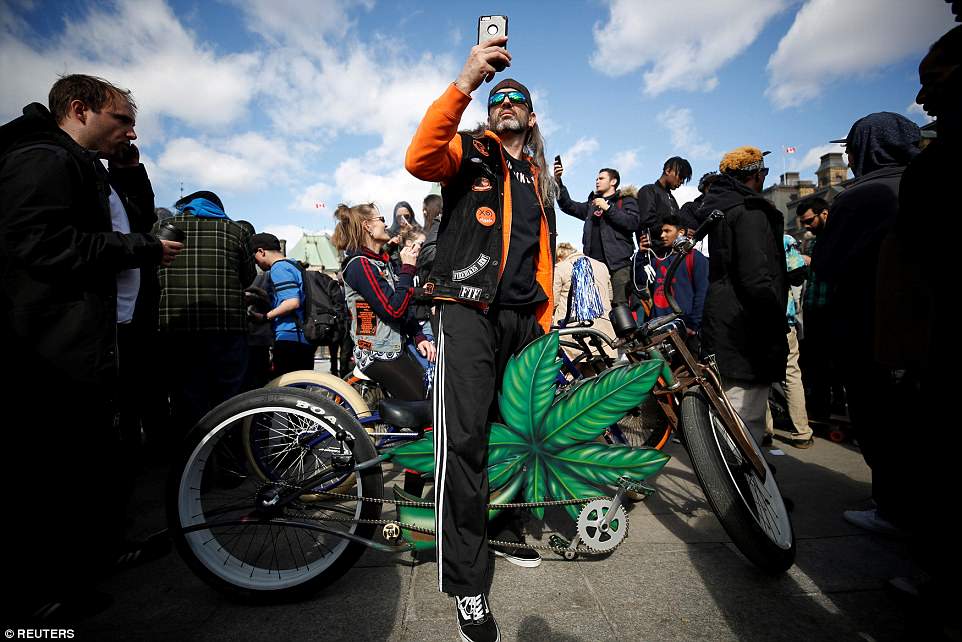 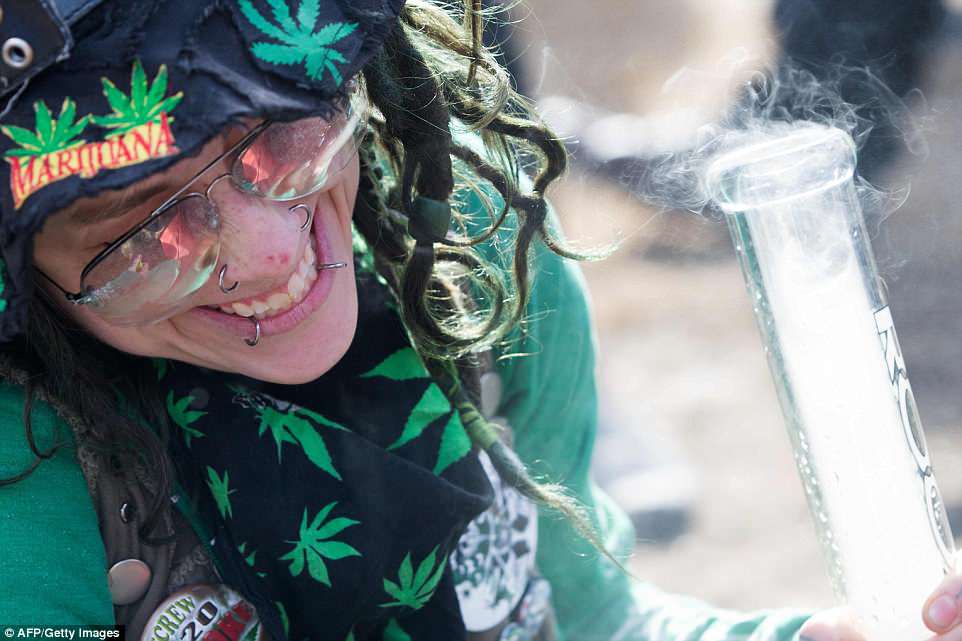 A woman inhales marijuana during the annual 4/20 rally on Parliament Hill in Ottawa, Ontario on Friday 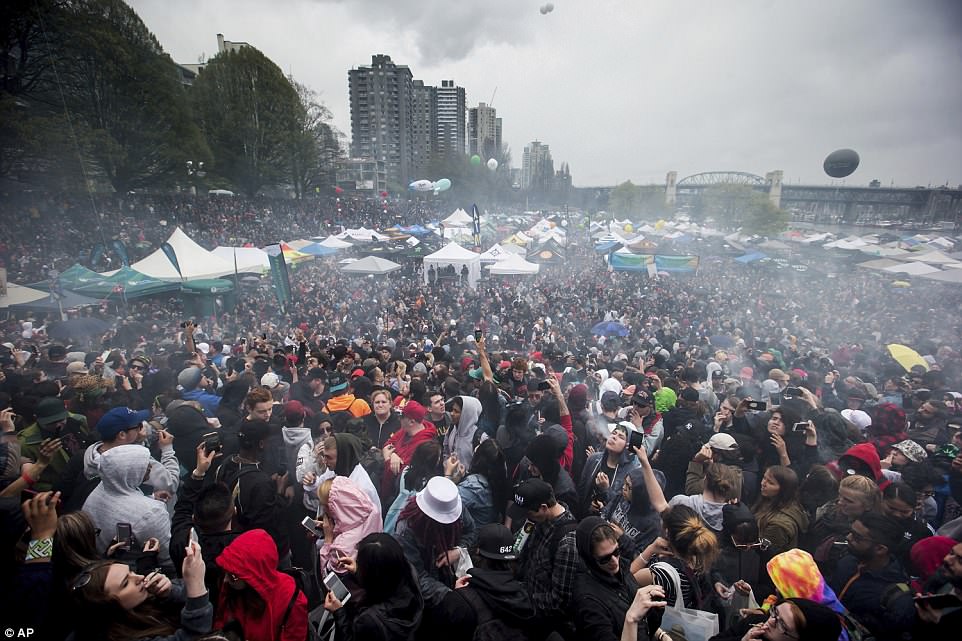 In Vancouver, British Columbia, a cloud of smoke hangs over the crowd as thousands of people smoke marijuana on Friday

Canada’s federal government is legalizing recreational cannabis across the country later in 2018.

In the US, federal lawmakers are also contemplating a move toward legalization, with top Senate Democrat Chuck Schumer using 4/20 to announce he’ll introduce a bill taking marijuana off the federal list of controlled substances.

The bill would effect decriminalizing its use, letting states decide how to treat marijuana possession.

Schumer announced his change of position in an television appearance with VICE, pulling out a Sharpie to autograph a glass bong for the outlet’s DC bureau chief Shawna Thomas.

‘If smoking marijuana doesn’t hurt anybody else, why shouldn’t we allow people to do it and not make it criminal?’ Schumer asks in the broadcast segment, airing Friday night. 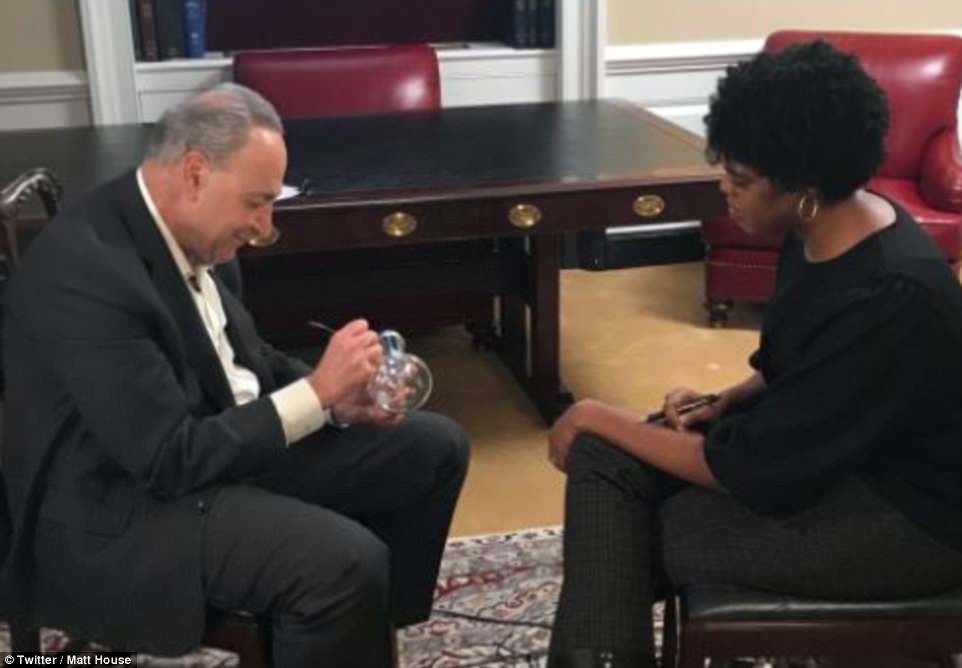 In the middle of a VICE interview on the subject of decriminalizing marijuana that airs on Friday, New York Democratic Senator Chuck Schumer autographed a glass bong. Schumer will introduce a bill to legalize pot at the federal level 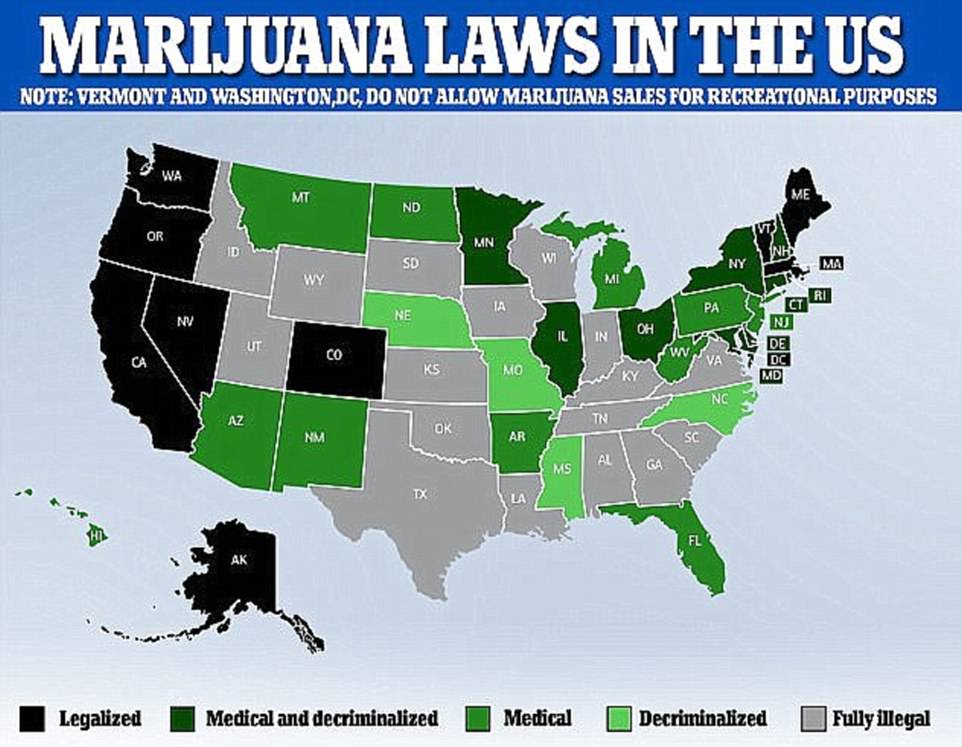 In states where possession of marijuana is still a criminal offense – though typically a minor ticket for small amounts – local police departments joined in the fun by poking fun at stoners.

‘Incognito traps have been set up throughout the city,’ tweeted cops in Wyoming, Minnesota on Friday, along with pictures of an officer spying on a raccoon trap baited with a trail of Funyuns.

In Marshall, Texas, the local police department had a tongue-in-cheek offer: ‘To ensure everyone has a safe 4/20 day, we are offering to test your marijuana for FREE to make sure it’s real.

‘Just personally deliver your stash to the PD and K9 Amor will check it out. If it’s real, you could receive a free stay in the finest resort in Harrison County.’ 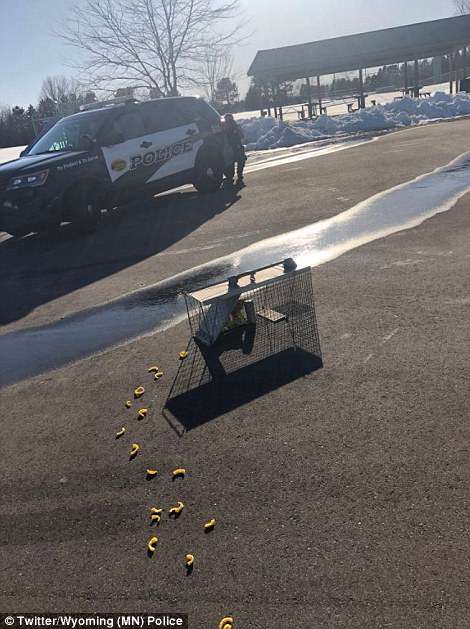 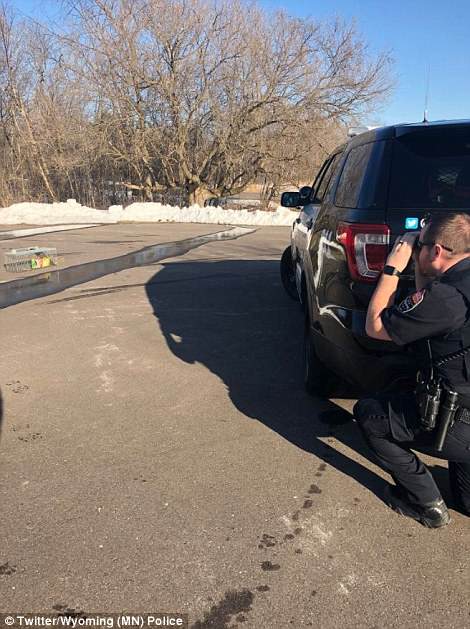 ‘Incognito traps have been set up throughout the city,’ tweeted cops in Wyoming, Minnesota, along with pictures of an officer spying on a raccoon trap baited with a trail of Funyuns