My kit is kept in the porch, jostling for position with the dog food and children’s trainers. Admittedly, its presence isn’t the most elegant way of welcoming people into our home, and has an irritating habit of tripping us up en route to the freezer.

But my family has been warned to move those three sets of dumbbells and chrome barbell at their peril.

They know they are more integral to my middle-aged body than any amount of spinach smoothies or exfoliating scrubs, because they give me what every woman over 40 should have in her anti-ageing armoury: muscles. 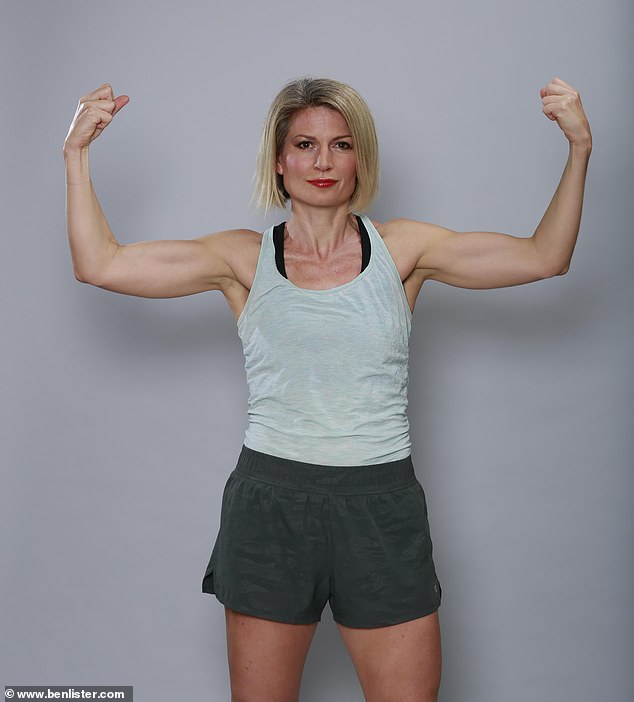 ‘I’ve long been an enthusiastic exerciser, running since I was a teenager for the endorphins it generated. But without the strength I’ve recently acquired in my arms, legs and abdominals, my body would be starting to flag — the cardio I focused on for fitness in my youth now not enough to maintain it alone,’ writes Antonia Hoyle (pictured) 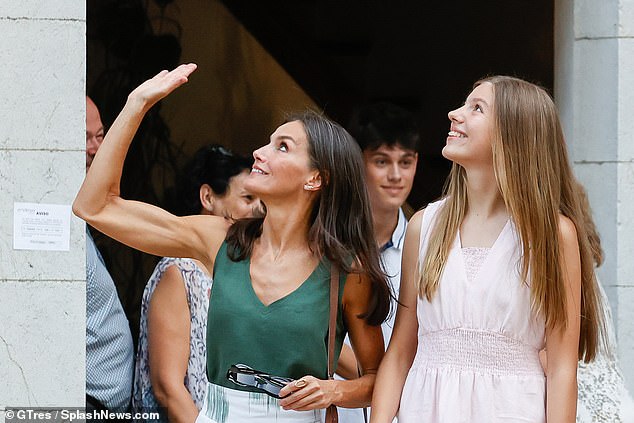 Fit for a Queen: A powerful royal wave from Queen Letizia of Spain, 49

I’ve long been an enthusiastic exerciser, running since I was a teenager for the endorphins it generated. But without the strength I’ve recently acquired in my arms, legs and abdominals, my body would be starting to flag — the cardio I focused on for fitness in my youth now not enough to maintain it alone.

So that’s why, two to three times a week, you’ll find me weight training in the kitchen at 5.45am, grunting through 30 minutes of lateral raises, bicep curls, planks, press-ups and myriad other exercises that feel every bit as arduous as they sound.

The upshot, however, is that at 44 my arm muscles can even command a grudging respect from my nine-year-old Marvel-loving son, whose action-adventure heroes boast biceps the size of bowling balls.

Which is why I applaud Nicole Kidman for her cover shoot for Perfect magazine released yesterday, where she shows off arm muscles as defined as those of any bodybuilder, belying her 55 years.

Flexing her biceps while flashing the tautest of tummies in a micro mini skirt and halter-neck top, Oscar-winner Nicole stares unapologetically into the lens.

As well she should. Because having a body that toned is not only emblematic of physical prowess, but mental fortitude. It’s a two fingers up to societal expectations that still, even in 2022, state that women should be devoid of any body definition that might ruffle the patriarchy.

Astonishingly, in an age in which nobody dares criticise the overweight and lambasting the naturally skinny is also — thankfully — frowned upon, female muscles are still seen as fair game. 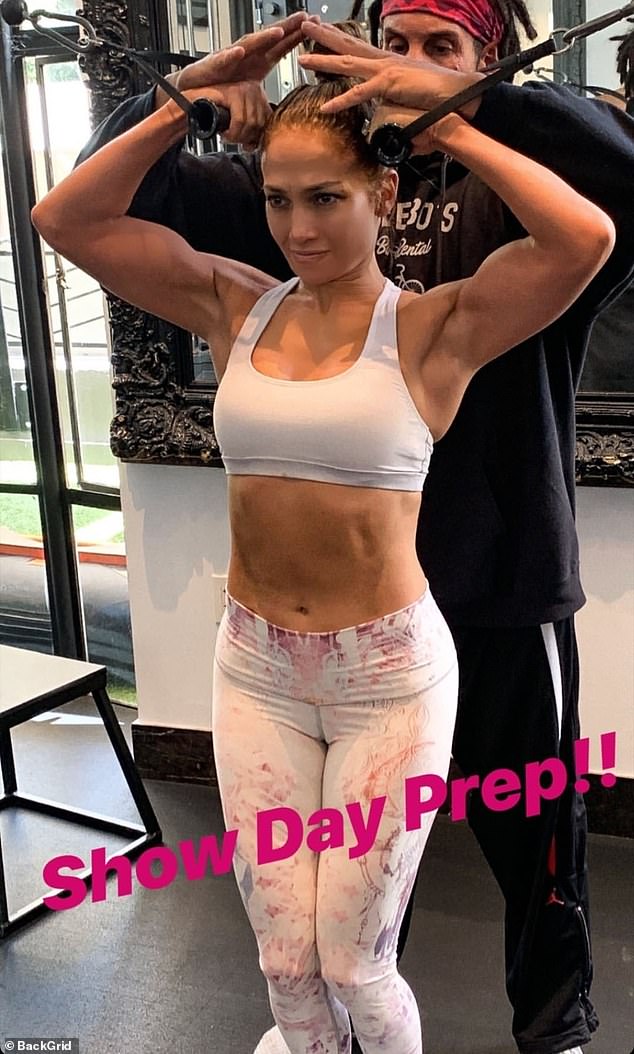 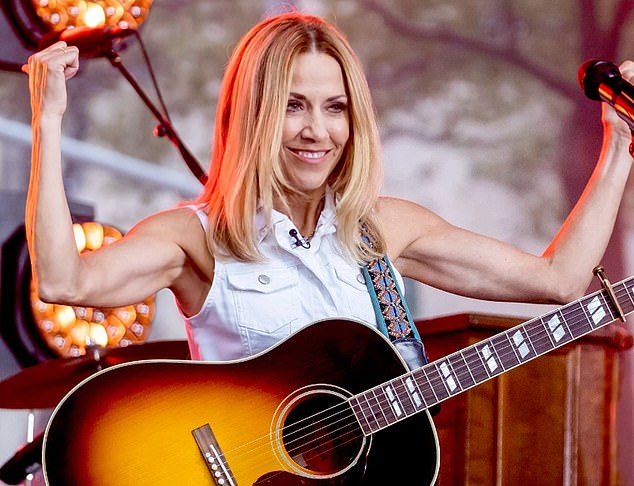 It’s been dubbed ‘fit-shaming’ — judging women who’ve turned their backs on delicate frames in favour of something more bulky.

Take tennis champ Serena Williams, who says she has been called a ‘man’ for her ‘outwardly strong’ appearance.

‘I don’t know how I would react if [my daughter] has to go through what I’ve gone through since I was a 15-year-old and even to this day,’ Williams, 40, has said, adding that she has been told she doesn’t ‘belong’ in women’s sports because of her physique.

Or Olympic gymnast Simone Biles, 25, who is often body-shamed and told she is ‘ugly’ on social media on account of her muscular figure. Thankfully, she too is defiant. ‘You can judge my body all you want, but at the end of the day it’s MY body,’ she tweeted. ‘I love it and I’m comfortable in my skin.’

Then there’s personal trainer Chloe Madeley, 35, daughter of Richard and Judy, whose honed hamstrings and extraordinary eight pack have led to her being described as ‘disgusting’. After she shared a photo of her impressive abs, one Instagram troll commented: ‘There’s nothing feminine about that!!!’

To which Madeley retorted: ‘What’s disgusting is your brain, that has been brainwashed into thinking anything other than ‘feminine’ is disgusting.’

Of course, these women’s livelihoods are intertwined with their fitness levels, but they are all still relatively young, making strength training easier.

Yet in middle age, we lose between 3 and 5 per cent of muscle per decade, meaning Nicole’s phenomenal figure is all the more impressive.

‘She’s not a youngster, so it’s completely inspirational,’ agrees celebrity trainer Cornel Chin, who has worked with Renee Zellweger, Leonardo DiCaprio and Colin Firth. ‘I’d say to get to that level she’s doing resistance training at least five times a week.’

Nicole has previously attributed her fitness to running, cycling, yoga and ‘whatever I can do and wherever I am in the world’. She also tries to eat healthily ’80 per cent’ of the time, saying she is ‘not someone that believes in denial’.

Chin adds that, with a naturally slim build, Nicole has good ‘raw material’ and stresses a muscle-strewn body is due in large part to genetics and diet. ‘Someone with slim parents will be able to build lean tissue more easily,’ he says, adding that ‘to see tone and definition’ people should restrict their fat and starchy carbohydrate intake and consume around 1-1.5g lean protein for every kilogram of body weight to help repair and build muscle.

‘For an average woman that would be 50-60g of protein such as chicken or fish a day. This is absolutely realistic — diets aren’t about science, but discipline. Have the occasional treat but don’t keep treats in the house that will tempt you.’

Which is where, alas, I fall down, prone as I am to finishing off a family-sized packet of chocolate after dinner. Perhaps a bit of extra padding — at 5ft 6in I weigh around 9st 10lb — is why I haven’t been publicly shamed for my own muscles. Or maybe my middle-aged uniform of baggy T-shirt and jeans isn’t conducive to attracting attention.

Truth be told, however, my main motivation isn’t looking good. I started lifting weights again — after a break — aged 41, when I kept pulling my calf muscles running and a physio suggested strength training would reduce the risk of injury.

Reluctant to join a gym, I spent around £60 on hand weights instead, my chrome barbell for squats bearing a 20kg weight and my dumbbells 8kg, 4kg and 3kg. Within weeks of lifting I saw a difference in my body shape.

But while I might have lost a couple of pounds, I harboured no desire to be skinny. What I was delighted by was my tighter stomach, defined shoulders and stronger thighs.

Looking powerful made me feel powerful — and still does. Weight lifting has been proven to burn fat, strengthen joints and boost bone density, lowering the risk of osteoporosis in later life.

Fascinatingly, however, it has also been found to improve mental health; a 2020 study revealed it could reduce anxiety. 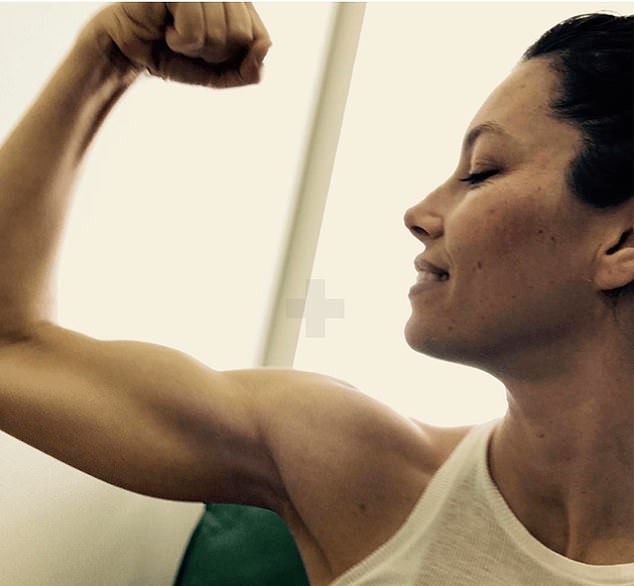 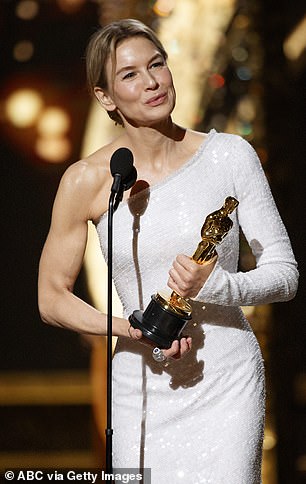 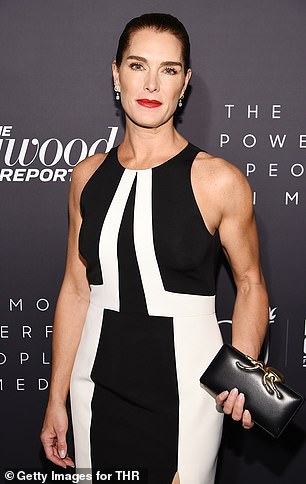 Certainly, I find it benefits my mind as much as my body. On the rare occasions I dress up to go out, friends have complimented me on my appearance, asking what I do to keep fit. When I say my weights routine comprises a list of old-fashioned exercises done on my kitchen floor with kit from Amazon — and offer to send them a copy — they seem taken aback.

I do, however, stress one essential component no amount of cash can buy — discipline.

Because — whisper it — I don’t actually enjoy weight-lifting. Unlike cardio exercise, such as running and cycling, it doesn’t give me a buzz.

I find it boring and painful and when my alarm wakes me up at dawn the prospect of lifting 8kg weights until my shoulders burn makes me want to use my new-found strength to punch someone.

Afterwards, however, it is an altogether different story. I think I can conquer the world — and I’d wager Nicole feels the same.