Nationwide protests against Parliament’s suspension taking place today have been organised by a hard-Leftist who previously labelled Remembrance Sunday ‘insidious’, it has been revealed.

Momentum member Michael Chessum, 30, is one of the leading figures behind protests in 30 UK cities including a march on Downing Street, that could possibly go to Buckingham Palace.

Organisers are hoping hundreds of thousands of people will take to the streets on Saturday after demonstrations began to flare up on Friday evening.

Mr Chessum has proven to be a controversial figure, most notably boycotting Remembrance Sunday as president of the University of London students’ union because he ‘regarded the ceremony as a political statement’.

Momentum member Michael Chessum, 30, is one of the leading figures behind protests in 30 UK cities that will culminate in a march on Downing Street, and possibly even Buckingham Palace

He was also a prominent figure in the 2010 student tuition fee protests which ended in a mob of protestors breaking into Conservative Party HQ at Millbank Tower against the wishes of the NUS. The protests also involved rioting in Parliament Square and the ambush of the Prince of Wales’s car.

Speaking yesterday, Mr Chessum, said that ‘disruption is the only form of leverage protesters can rely on’ and added: ‘We would go further than anticipate (civil disobedience). We would defend it.’

While other groups have stressed the need for peaceful demonstration, in an interview with the Times, Mr Chessum even mentioned how suffragettes burned down Liberal Chancellor David Lloyd George’s home as he made reference to ‘civil disobedience’. 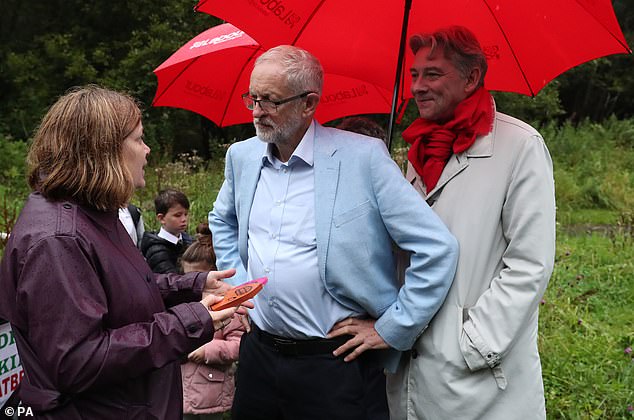 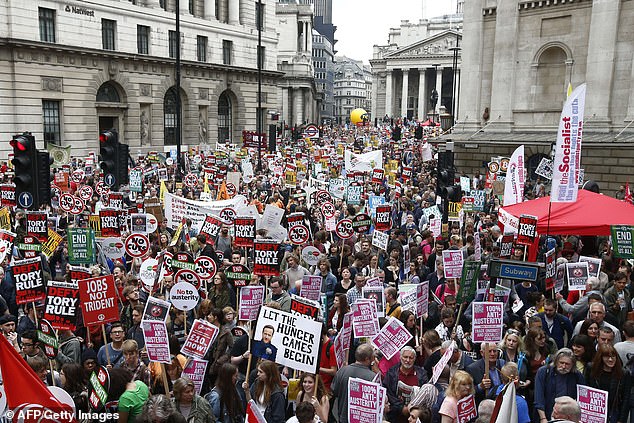 Anti-Brexit campaign group Another Europe Is Possible has planned 32 £StopTheCoup protests to take place in England, Scotland and Wales. And left-wing group Momentum is calling on its members to ‘occupy bridges and blockade roads’ in conjunction with unrest on the streets

‘There will be disruption and I’m sorry for that but in the face of what Boris is planning, it will be worth it. The suffragettes burnt down the home of David Lloyd George, the chancellor of the exchequer — I’m sure that was disruptive for him,’ he said.

Anti-Brexit campaign group Another Europe Is Possible has planned 32 £StopTheCoup protests to take place in England, Scotland and Wales. 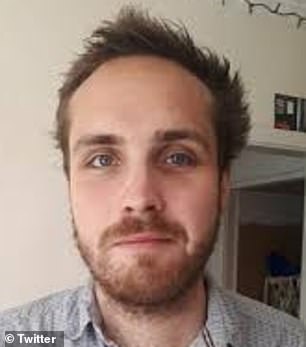 Mr Chessum was also a prominent figure in the 2010 student tuition fee protests which ended in a mob of protestors breaking into Conservative Party HQ at Millbank Tower against the wishes of the NUS.

And left-wing group Momentum is calling on its members to ‘occupy bridges and blockade roads’ in conjunction with unrest on the streets.

Shadow chancellor John McDonnell urged Labour MPs to join the nationwide protest, calling the Prime Minister’s decision to close Parliament for up to five weeks an attempt ‘to shut down democracy’.

‘As elected Labour MPs across the country represent their constituents by joining in these protests, I urge other MPs to think of their constituents whose jobs and livelihoods will be put at risk in a no-deal Brexit,’ Mr McDonnell said.

‘If Boris Johnson wants a mandate, then he should call a general election and put it to the people.’

The shadow chancellor is due to address youth movements at the main London protest at Downing Street on Saturday, while Labour leader Jeremy Corbyn said he will speak at a ‘major rally’ in Salford.

Other demonstrations will be held in cities including Birmingham, Manchester, Liverpool, Glasgow, Swansea, Leeds, Bristol and Aberdeen.

Both pro and anti-Brexit protesters clashed on Wednesday after the Queen approved an order that will see Parliament suspended for more than one month.

Laura Parker, Momentum’s national co-ordinator, said: ‘We have a barely-elected millionaire prime minister who is happy to exploit a loophole in our flawed democracy to force through a Trump-first, No Deal Brexit. 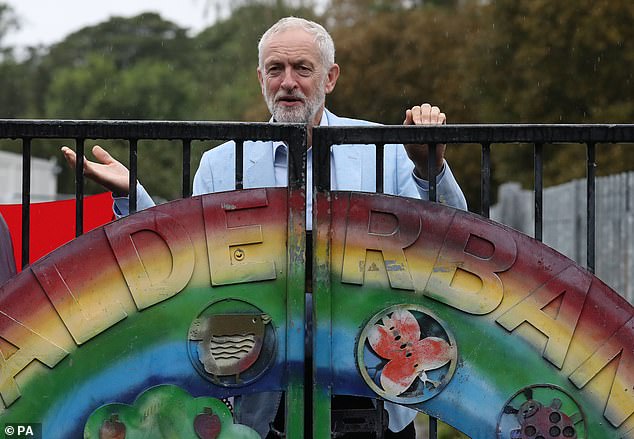 Mr Corbyn, pictured above in Calderbank, near Glasgow, tweeted: ‘The public outrage at Boris Johnson shutting down democracy has been deafening. People are right to take to the streets – and I encourage everyone to join the demonstrations in London and across the country’ 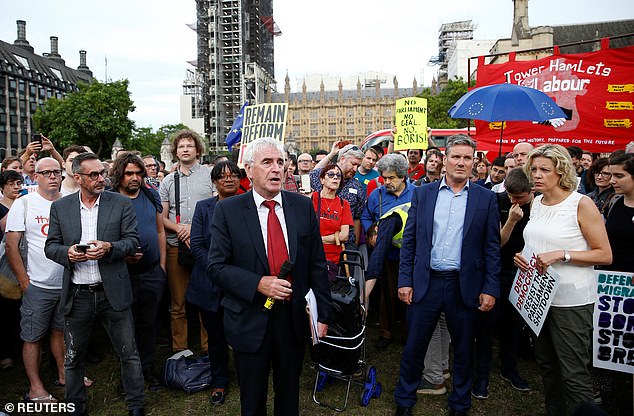 John McDonnell, pictured at a protest this week, said: ‘Boris Johnson’s attempts to shut down democracy are being resisted by the people. Whether you voted for Remain or Leave, the people did not vote for No Deal for which there is no mandate’

‘He is part of the same tiny, privileged elite which has been hoarding power at the top and eroding our democracy for decades.

‘There are thousands of people from all over the UK and across the political spectrum who will protest to stop Johnson closing the doors on our democracy,’ she said.

‘No-one voted for this, and it’s clear we need to urgently redesign our system to rebalance power away from the top.’

The Jo Cox Foundation, which was set up in the wake of the Labour MP’s murder in 2016, warned that anger over Brexit ‘should not spill over into something more dangerous’.

The Foundation said: ‘We believe strongly in freedom of speech. But we would urge everybody to avoid saying or doing anything that could incite or lead to violence.’ 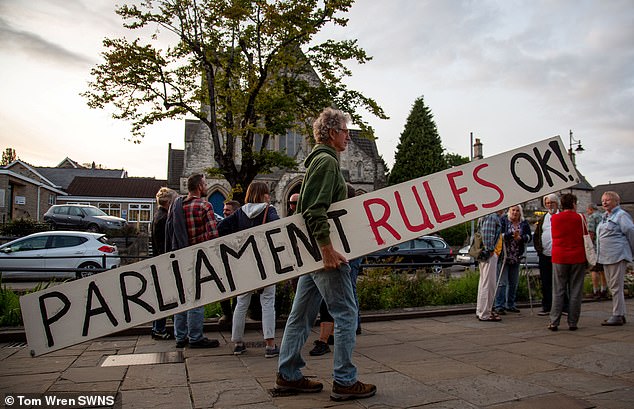 Disruption was planned across 32 cities today – with Momentum promising more than 80 demonstrations over the next week. People are pictured above protesting against Jacob Rees Mogg in Midsomer Norton, Bath 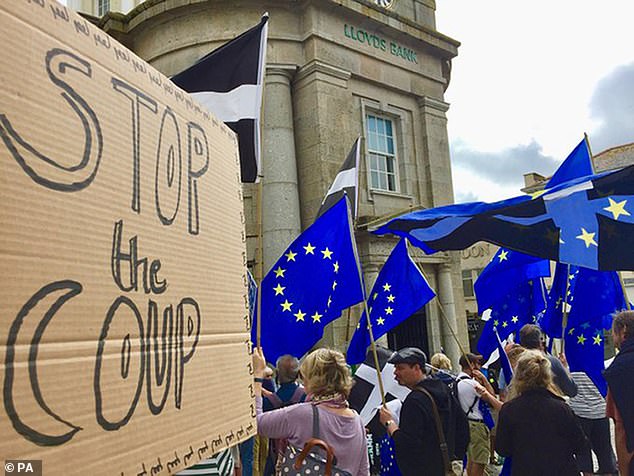 Left-wing group Momentum is calling on its members to ‘occupy bridges and blockade roads’ in conjunction with the so-called ‘Stop The Coup’ protests. A protest earlier this week is pictured above

The calls for protests come as a petition against the Prime Minister’s plan to suspend Parliament racked up more than 1.6 million signatures as of Friday evening.

Mr Corbyn tweeted: ‘The public outrage at Boris Johnson shutting down democracy has been deafening. People are right to take to the streets – and I encourage everyone to join the demonstrations in London and across the country.’

The threat of protests has also forced the cancellation of the Westminster Dog Of The Year competition next Thursday.

The Kennel Club and Dogs Trust, who organised the event, said: ‘This is due to concerns about the increase in protests around Parliament.

‘Ensuring the safety of the dogs and the MPs taking part is absolute priority.’

Ex-aide who wants chaos on streets 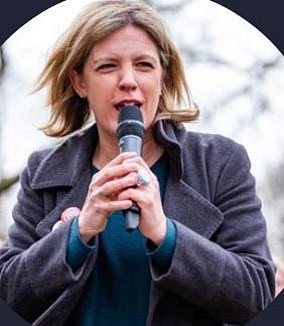 Laura Parker, 49, is the hard-Left group’s national coordinator who has been urging supporters to ‘shut down the streets’

The Momentum militant hoping to bring Britain to a standstill is Jeremy Corbyn’s former private secretary.

Laura Parker, 49, is the hard-Left group’s national coordinator who has been urging supporters to ‘shut down the streets’.

The activist faced criticism last year after she dismissed widespread claims of anti-Semitism and bullying within the group as ‘mud-slinging’ and smears.

Unlike many of Corbyn’s key allies, Miss Parker, who is the daughter of a university professor and a school teacher, attended her local comprehensive in Leeds.

She graduated from the University of Liverpool with a degree in Latin American studies and a master’s in public administration, and speaks Italian, Spanish, French, Romanian, Bulgarian and Portuguese.

She is married to Italian entrepreneur and politician Stefano Ciccone, 55, with whom she shares a very modern living arrangement. She told The Times last year that her ‘capitalist’ husband lives in Italy while she shares a rented house with a friend in Clapham, south-west London, because she cannot afford to buy in the capital.

When Miss Parker stood down as private secretary to Mr Corbyn in September 2017 after 19 months in the job, it was described as ‘a big loss to the operation’.

She later became Momentum’s national coordinator and stood as a Labour candidate in the European Parliament elections this year.

Of her election campaign, she wrote on her Facebook: ‘If elected as an MEP, I’ll work to build an internationalist, socialist movement that will link up activists and campaigns across the continent.

‘This is a cause that is close to my heart. I lived and worked in Bulgaria, Romania, Belgium and Italy for 17 years of my life, and my husband is an EU citizen facing the same uncertainty millions of others face.’

Before entering politics, she spent 15 years working for children’s charities.