The second named storm of August battered Britain with unseasonably strong winds and heavy rain today – signalling the end of summer and a washout end to staycations across the country.

Storm Francis brought gusts of more than 50mph overnight ahead of expected 70mph speeds this morning and a month’s worth of rainfall in just a few hours, causing chaos for commuters and holidaymakers.

Campers, especially those trying to make the most of the last week of the school holidays at the coast, were prepared for the worst, with warnings over trees being uprooted and power lines downed by the high winds.

It comes after chaos in London last night, with drivers forced to wade through waterlogged roads as drains struggled to clear the rain fast enough – and other motorists swerved into the path of oncoming traffic.

Severe wind and rain weather warnings have been put in place by the Met Office for much of the UK today, with the storm arriving from the Atlantic overnight and travelling eastwards before reaching the North Sea tomorrow.

The gusts could cause ‘danger to life’ from flying debris, damage to buildings and disruption to travel services, forecasters said as they issued a wind warning running for 24 hours from 9am this morning.

The rain is expected to be heaviest in Northern Ireland and south-west Scotland, where up to 3.5in (90mm) could fall – well above the monthly August average of 2.8in (70mm) – bringing a risk of localised flooding. 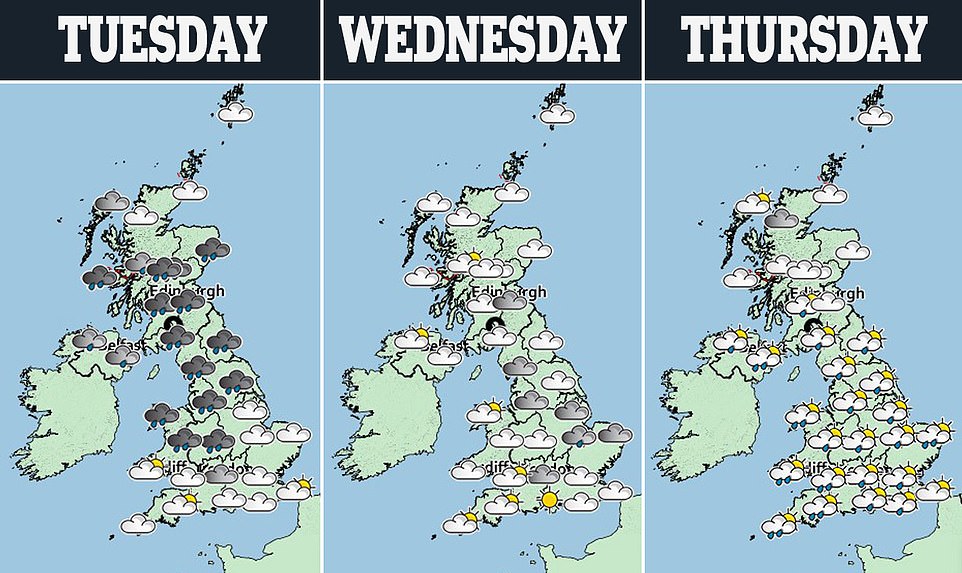 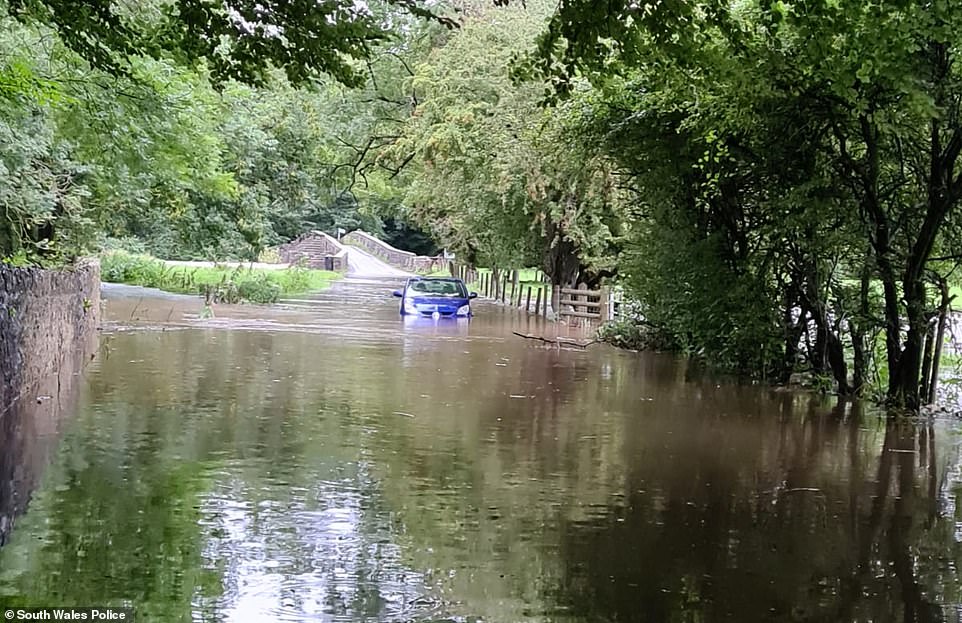 Mount Batten in Plymouth and Mace Head in County Galway on the west coast of Ireland both recorded gusts of 51mph overnight, while 30.8mm (1.2in) of rain fell between 5pm and 11pm yesterday in parts of County Kerry.

Fire crews were called to The Square at Bantry in County Cork after flooding, while the Environment Agency issued 17 flood alerts across England, and the Scottish Environment Protection Agency imposed a further ten. 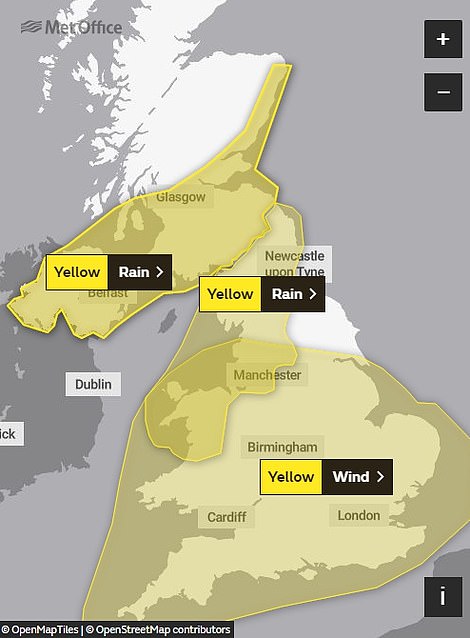 Alex Deakin from the Met Office said it will be ‘wet and windy for large chunks of the UK’, adding: ‘The bands of rain move into Northern Ireland and stick around, move into Scotland and hang around for most of the day.’

The rain warning – which began at midnight overnight– covers an area in Scotland including the A83 Rest and Be Thankful in Argyll and the railway line south of Stonehaven in Kincardineshire. A ScotRail train was derailed by a landslide near Stonehaven earlier this month, killing three people and injuring six others.

Nicky Maxey from the Met Office said: ‘Since we began naming storms in 2014, we have never had one in August. Now we have two.’

She added: ‘For Scotland and Northern Ireland, the real worry is for the amount of rain which Storm Francis contains. It’s a low-pressure system being fired across the Atlantic by a jet stream running at 120 knots (138mph). It deepens rapidly as it arrives to a position which is pretty strong for this time of year.’

The Met Office said some communities could be cut off by flooded roads and travel services may be badly hit, with parts of Scotland particularly under threat.

ScotRail said it was advising customers to check their journey on its app or website before they travel, while CalMac ferry routes on Scotland’s West Coast were placed on a warning of a ‘heightened risk of disruption’. 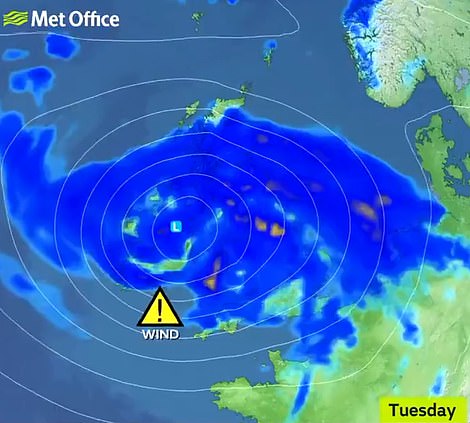 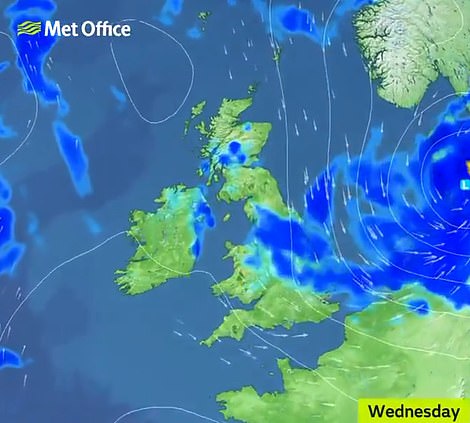 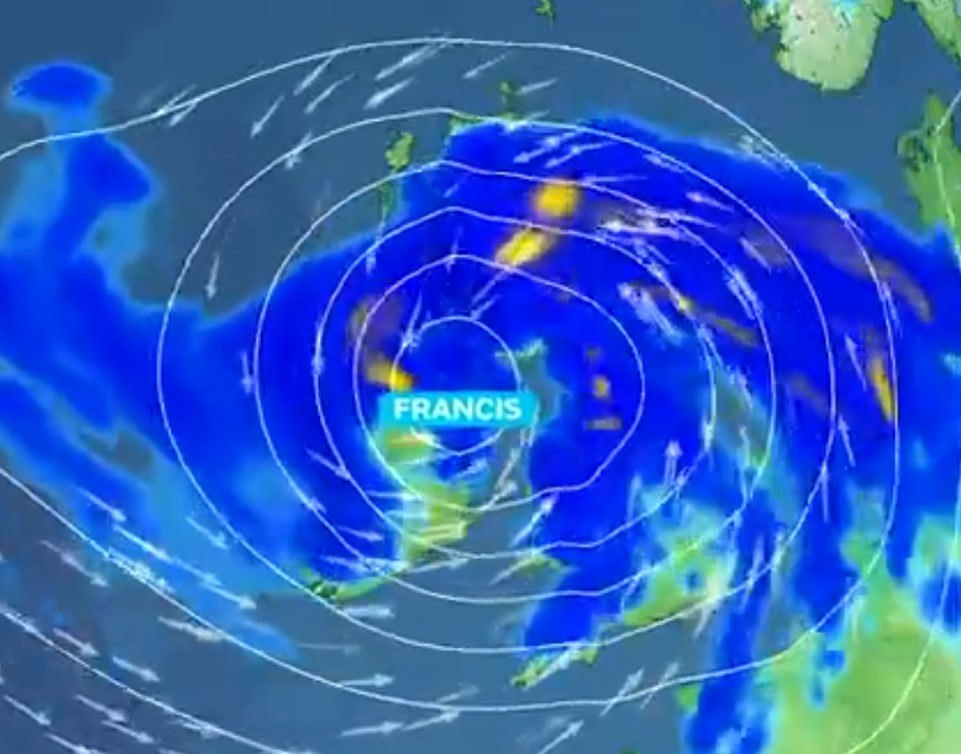 Storm Francis engulfing the UK and set to bring torrential downpours and strong winds, putting the country at risk of localised flooding

Although autumn doesn’t begin until September 1, temperatures are set to drop to 16C (61F) to 18C (64F), making it feel cooler than in recent weeks.

The storm is expected to clear by tomorrow lunchtime but forecasters said it is unlikely the heatwaves of earlier in the month will return in time for the bank holiday weekend.

Instead the conditions are likely to be changeable, with a mixture of sunshine and scattered showers for most parts. The bad weather follows a similar spell of unseasonable conditions last week when Storm Ellen hit the UK.

The Met Office has never had two named storms in August since the process started in 2015, but Francis comes on the back of Ellen which struck last week and caused power outages.

It was blamed for several deaths, including that of a seven-year-old who died in Bobbing, Kent, on Friday after being struck by a tree toppled by strong winds.

Ellen also saw 15-year-old Nicola Williams swept to her death in the Rhymney River in Llanrumney, Cardiff, and a 50-year-old holidaymaker die in the sea near Helston, west Cornwall, after getting into difficulties.

Meanwhile Mark Spence, 47, was also killed after being struck by debris as he slept when the chimney stack was blown through the roof of his home, in Bradford, West Yorkshire, on Sunday.

Rod Dennis, spokesman for RAC Breakdown, said the storm could cause problems for those on the roads over the next 24 hours. ‘Drivers look set for yet more miserable conditions in the run-up to the bank holiday,’ he said.

‘At the very least, surface spray on the roads will be a problem, but if conditions deteriorate further there’s the prospect of localised flooding and falling branches which could both negatively affect journey times.

‘Drivers must be on their guard and, even though it’s August, trips by car look likely to be anything but plain sailing. Never attempt to drive through floods unless you are sure the water is shallow enough for you to make it through.’

Similarly, the RNLI warned people to take care on the coastline and not to enter the water where a red flag is flying.

Forecasters said the winds were ‘unusual’ for August, but would have to go some way to beat the current record wind gust speed of 87mph recorded at The Needles on the Isle of Wight in August 1996.

Between August 1 and 22, the UK as a whole had seen some 72.7mm (2.9in) of rainfall – around four-fifths of the average rainfall for the month.

No further storm is currently forecast this month, meaning the next storm will begin with A rather than G, as the storm-naming calendar resets on September 1.