Four Good Samaritans who raced to rescue an 80-year-old man from his sinking car amid floods caused by Storm Isaias ended up getting sucked into a drainage pipe and washed out in a creek hundreds of feet away – but miraculously survived.

The elderly man was in his car at the Lantana Square Shopping Center in Hockessin, Delaware, when it was trapped by the rising flood waters, and began to get sucked into a drainage culvert.

The dramatic rescue attempt was caught on video, showing the four wading out into the flooded parking lot to rescue the driver.

But the courageous strangers soon discovered that they were no match for the swift torrents of water when all four were sucked into the drainage pipe and carried hundreds of feet through it to a creek.

The drainage pipe is the same one that claimed the lives of two men in their 20s during Hurricane Irene in 2011.

Heroic Good Samaritans are pictured atop a sinking car in the flooded parking lot of the Lantana Square Shopping Center in Hockessin, Delaware, during Tropical Storm Isaias 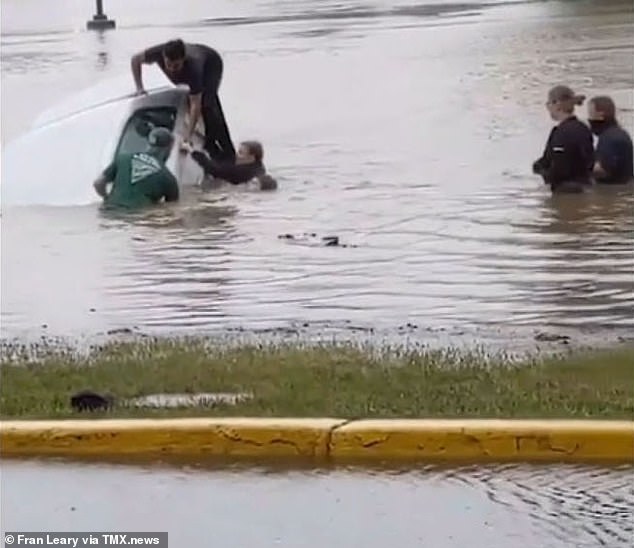 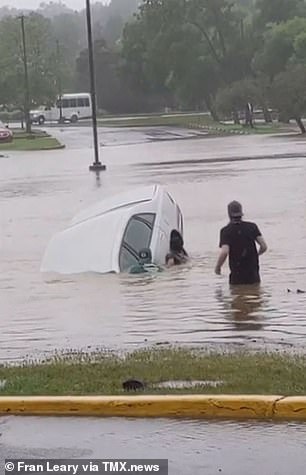 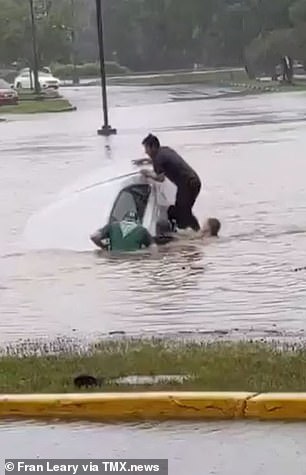 A surge sucked the rescuers into a drainage pipe, which carried them to a creek located several hundred feet away

This time, luck was on the side of the victims, who were found clinging to trees in a creek located several hundred feet away from the parking lot.

Officials said all five people involved in the emergency situation, including the trapped motorist, survived the harrowing ordeal.

The incident began unfolding at 11.45am, when the 80-year-old driver returning home from an appointment missed a turn and found himself in the flooded shopping mall parking lot.

The water level was quickly rising and the driver was unable to escape. Soon, his vehicle was submerged in several feet of floodwater.

Hardware store owner Phil Aeschleman, and a 17-year-old employee were two of those involved in the rescue attempt, WDEL reports.

The employee, who did not want to be named,  grabbed a hammer and a crowbar from their shop and tried to break into the sinking car, but was swept into the drain.

‘He went out there with the hammer and just went under,’ Aeschleman told WDEL. 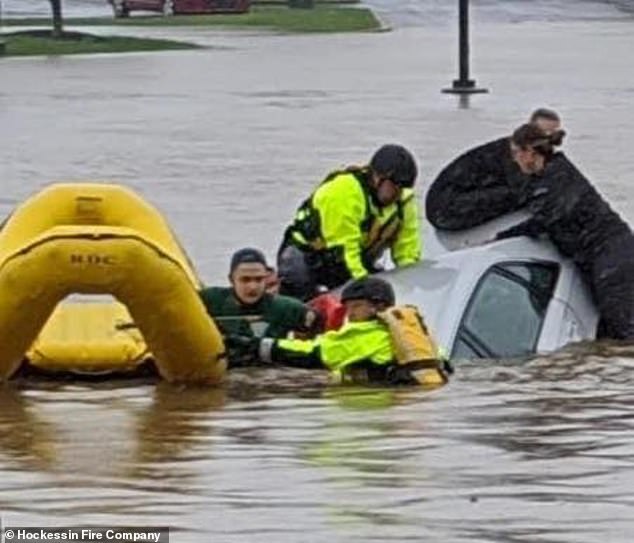 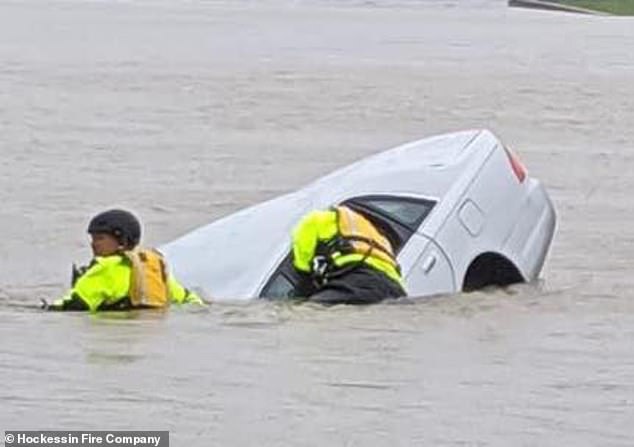 Fearing for his employee after he disappeared under the water, Aeschleman waded in too and also got sucked into the pipe.

‘It’s probably 15 ft. from where I go under the car and get sucked into the pipe,’ Aeschleman said.

‘Then all of a sudden I’m in this pipe, and it’s dark but then my head pops up and there’s air. The pipe’s not completely filled up.

‘With my head bumping along the pipe as we rode the current and then I could see the light at the end of the tunnel. So okay this is gonna be alright.’

Luckily his employee was hanging from a tree at the other end of the drainage pipe, and managed to grab him before he was swept into the fast-moving creek.

Another of the Good Samaritans was a store worker named Jose who attempted to break the car windows and free the man inside, reported 6abc. 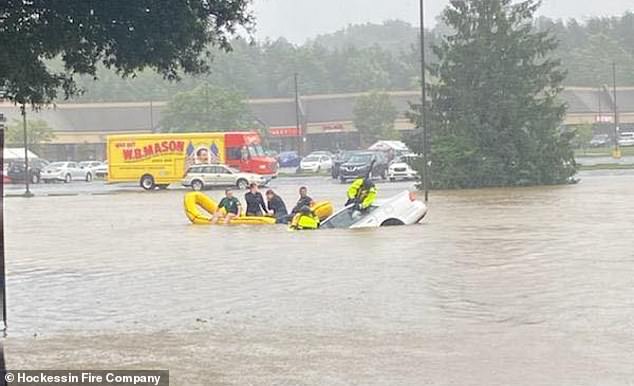 Then a surge came and sucked the Good Samaritans into the large drainage pipe.

Fran Leary, who works at the shopping center and captured a portion of the rescue attempt on his cellphone, said he later spoke to Jose, who was not seriously hurt but was left shaken by his brush with death.

‘He said he had no control,’ Leary told the station. ‘It sucked him under. He was getting banged up and tried to grab onto anything he could. He thought his life was over. He saw himself at his funeral. He said goodbye to his wife and it was very scary.’

Jose lost his wedding ring and watch to the unforgiving current, and he and the others suffered scratches to their limbs, but everyone involved was just happy to be alive, according to Leary.

Meanwhile, firefighters arrived on the scene by boats and managed to pull the trapped driver to safety through the back window in the nick of time. 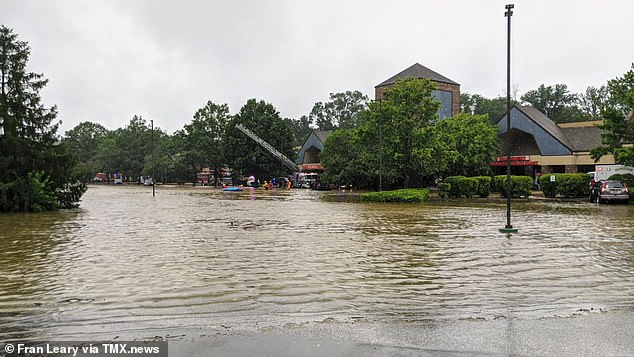 The four Good Samaritans were found clinging to trees, with their arms and legs scratched up 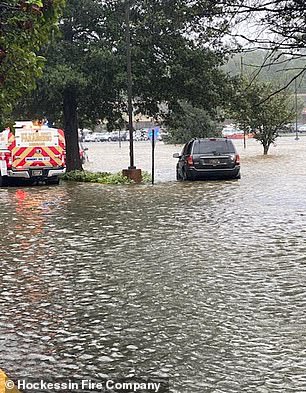 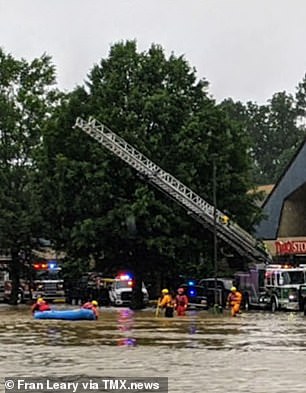 Tropical Storm Isaias brought severe flooding to the area. The town was also hit by Hurricane Irene nine years ago

The driver’s daughter, Theresa Craparotta, said the first time she heard of what happened was when he father called her from an ambulance taking him to Christiana Hospital, and asked her to pick him up.

Craparotta said on Wednesday her father was sore from his ordeal but was otherwise unharmed. She added that her dad told her he was praying inside his sinking car that he would be rescued.

The daughter expressed her gratitude to the firefighters and Good Samaritans who put themselves in harm’s way to save her father’s life.

‘Just to know that so many people were willing to risk themselves and jump in just to try to get him out before rescue got here is just amazing,’ she said.

Hockessin was hit be Hurricane Irene in August 2011, claiming the lives of two friends, 25-year-old Christopher Valentine and 25-year-old Jean Baptista, who was sucked into the same drainage pipe as the Good Samaritans this week.

According to reports published at the time, Baptista and Valentine went missing after texting friends they were running through the hurricane on the night of August 28, 2011.

Their bodies were found hours later in a tributary of Mill Creek behind Lantana Square.