Storm sweeps through Northeast, 300,000 without power

One and a half million people have been left without power after severe storms battered the Northeast, leaving the Amtrak service between Boston and New Haven, Connecticut, suspended and dozens of schools closed.

Strong winds and heavy rainfall brought down power lines across the region, causing travel chaos across New England and the tri-state area.

Many schools across New England, New York and Virginia are closed today because of the power outages.

Meanwhile, the Amtrak service between Boston and New Haven in Connecticut suspended after the storm and flights into La Guardia Airport, in New York, are running with two hour delays due to the powerful winds, according to FlightAware.

Severe weather warnings for strong winds and flash flooding have since been issued along the Northeast.

A large tree is down on top of a car on Mellen Street, in Portland, Maine, Monday, after early morning storm with high winds 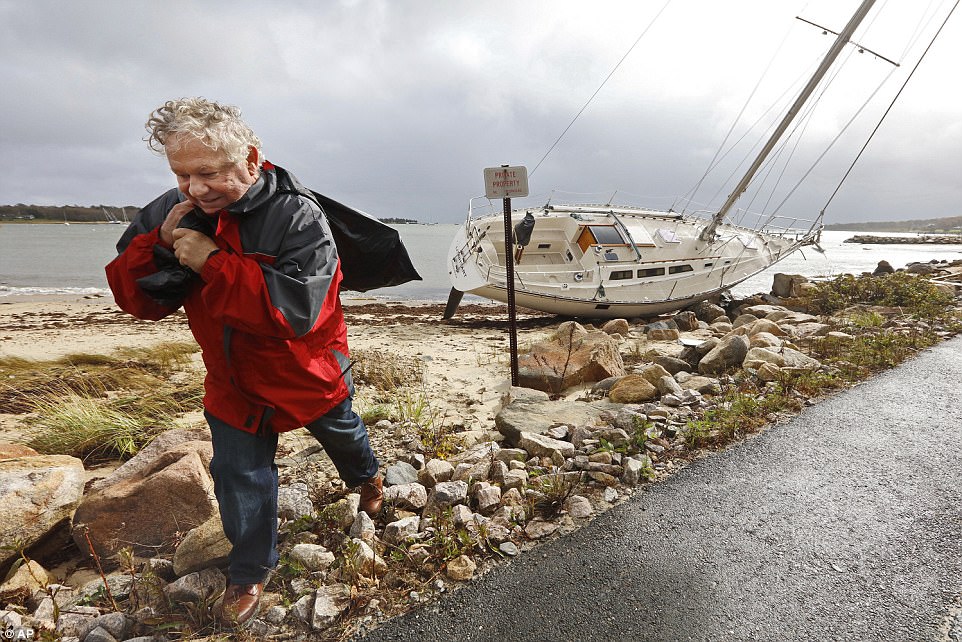 Jack Durant, owner of the sailboat Lionheart, carries a bag with valuables he removed from his sailboat after it washed up on shore on Monday, after unexpected overnight high winds sent sailboats crashing onto Padanaram beach in Dartmouth, Massachusetts 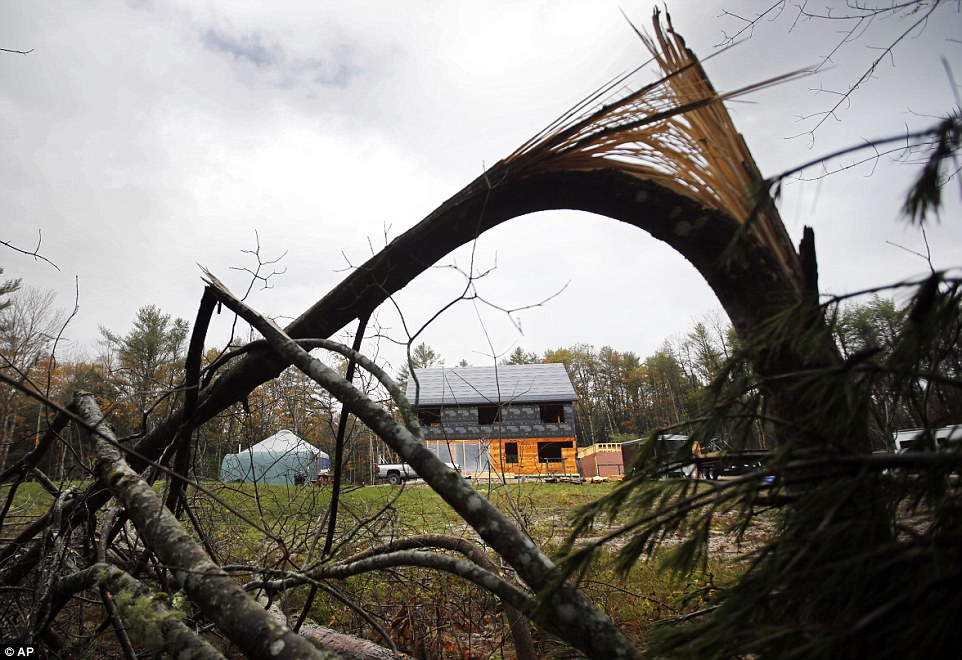 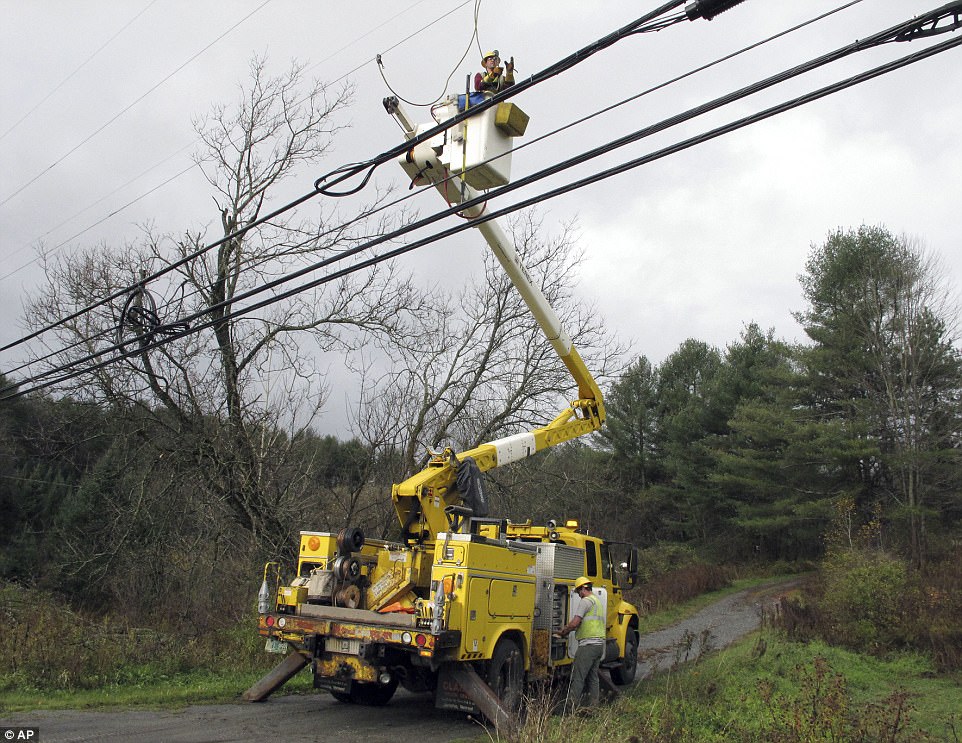 A line crew works to restore power, on Monday, in East Montpelier, Vermont, after a wind storm knocked down trees and power lines, leaving more than a quarter of Vermont’s population in the dark 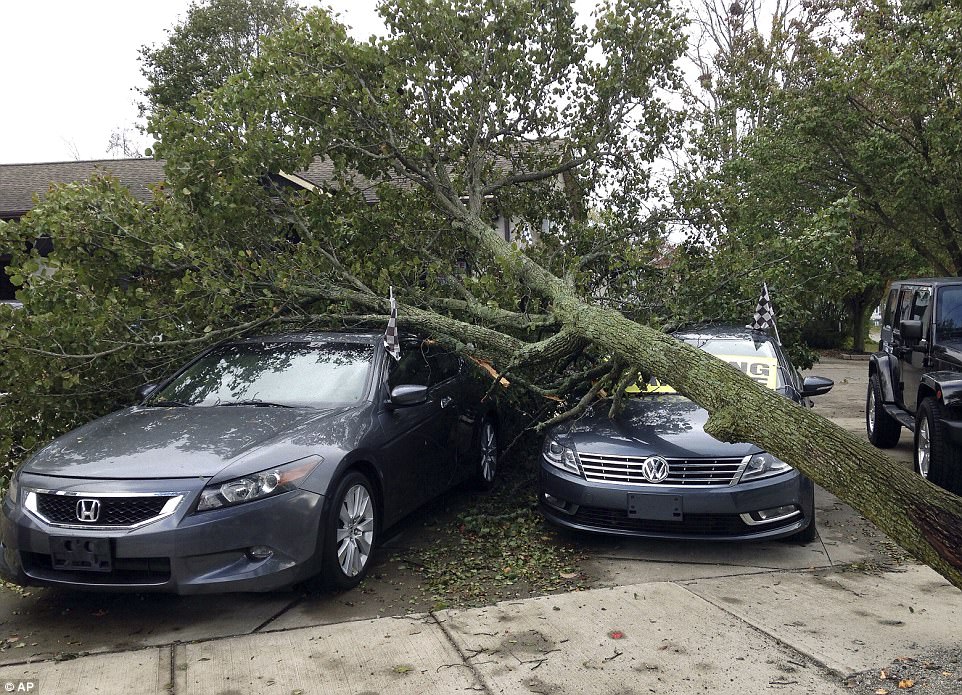 A toppled tree covers cars for sale at Demo’s Auto Sales after an overnight storm Monday, in Warwick, Rhode Island

In Freeport, Maine, Rachel Graham, was staying in a yurt with her husband and their 2-year-old daughter, Priya, while their home was being built.

She said listening to the 50-70mph winds outside was ‘terrifying.’

‘You could feel everything and hear everything,’ Graham told ABC News. ‘It was a lot of crashes and bangs.’

‘At my direction, the Emergency Operations Center is activated and personnel are at the ready to help New Yorkers impacted by these adverse weather conditions,’ he said in a statement. 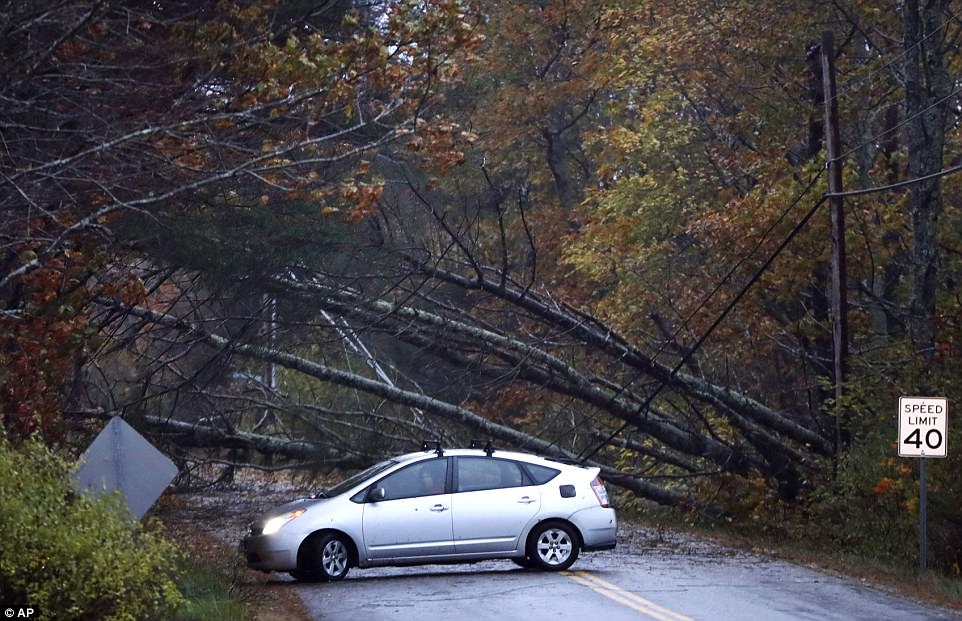 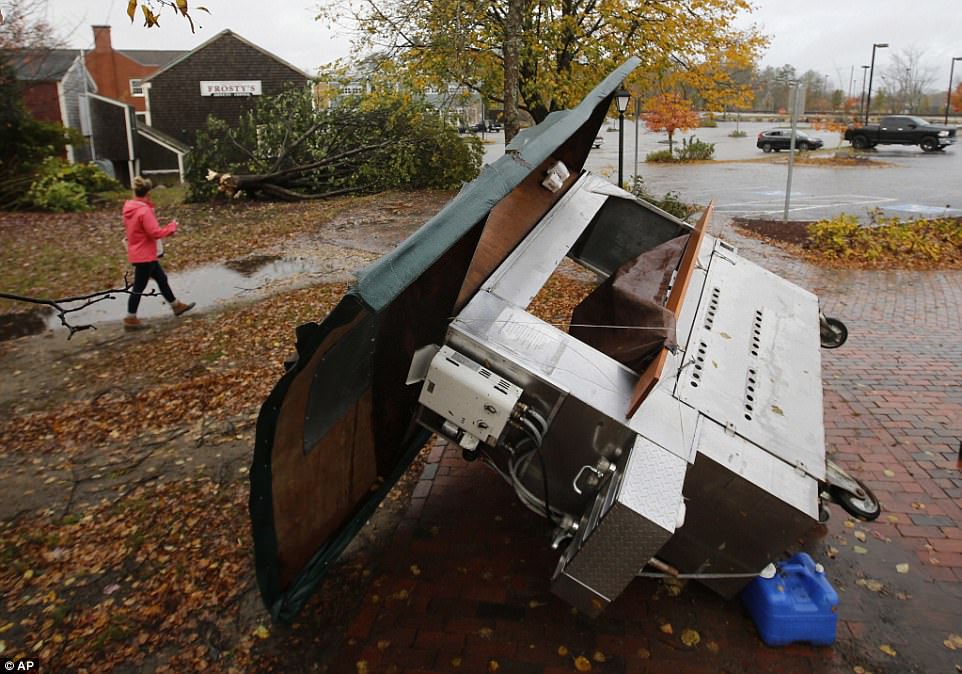 Dozen of schools are closed today, Amtrak services are suspended and 300,000 have been left without power after the powerful storm. Pictured; a food stand and a tree toppled by the storm in Freeport, Maine, Monday 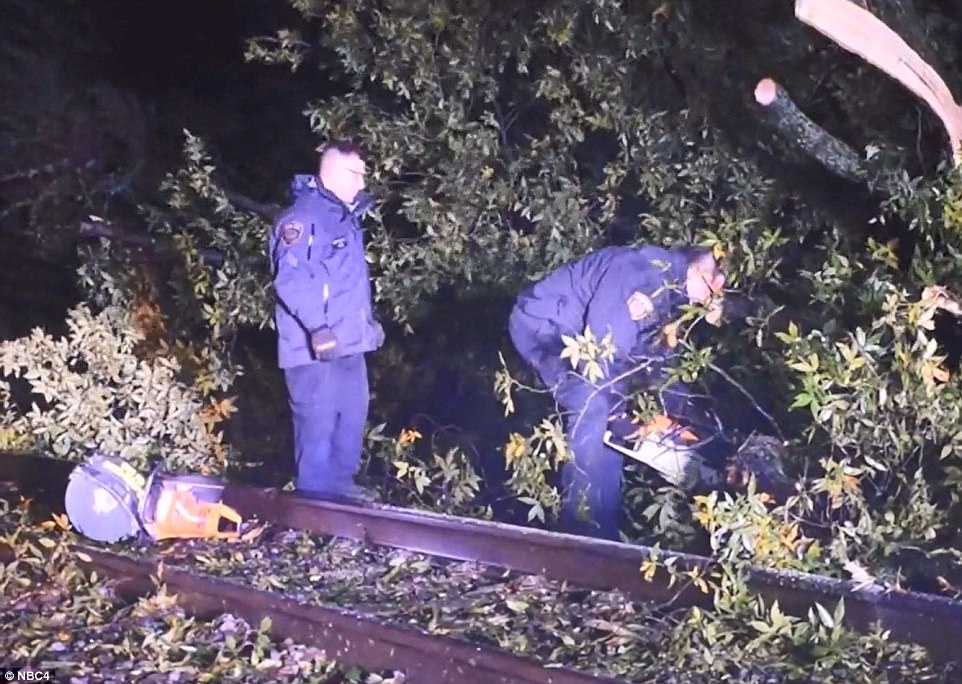 ‘I urge everyone to take caution, avoid driving, and remain indoors if possible.’

National Weather Service meteorologist Joe Dellicarpini said there were reports of downed trees and power lines around the region and roads that were impassable in spots due to flash flooding.

The storm, fed in part by Tropical Storm Philippe, also left more than 155,000 Connecticut customers were without power around 6.30am Monday. 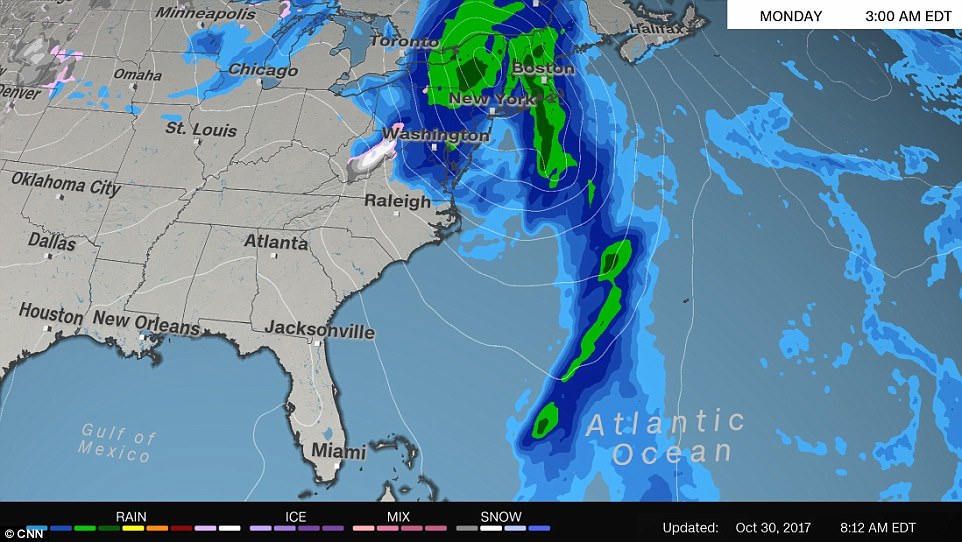 The storm, fed in part by Tropical Storm Philippe, hit Virginia, New York and Connecticut early this morning and will move north today through to Maine,New Hampshire and Vermont 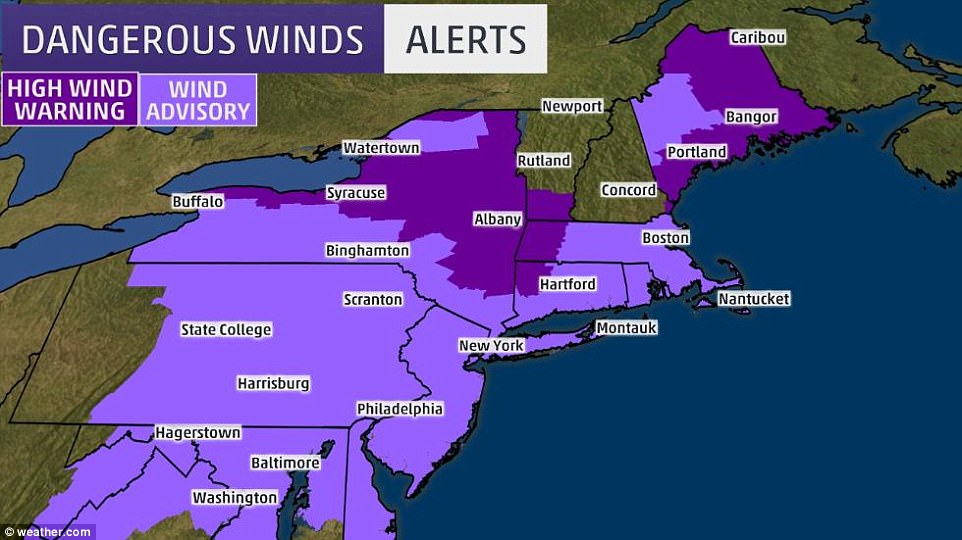 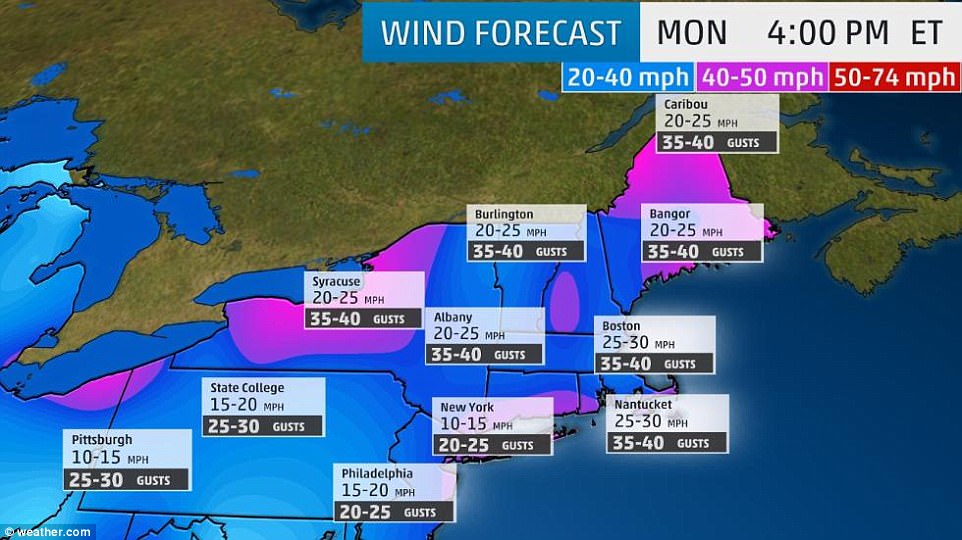 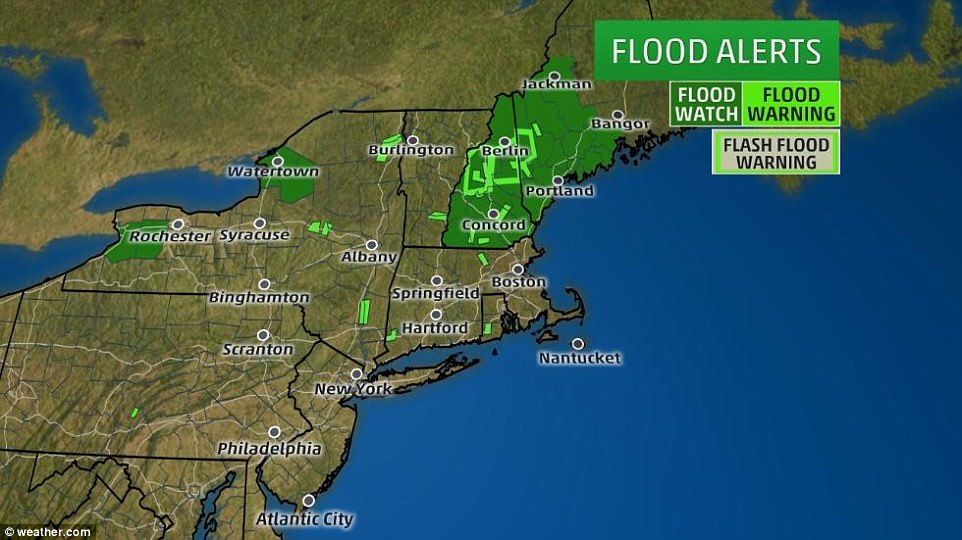 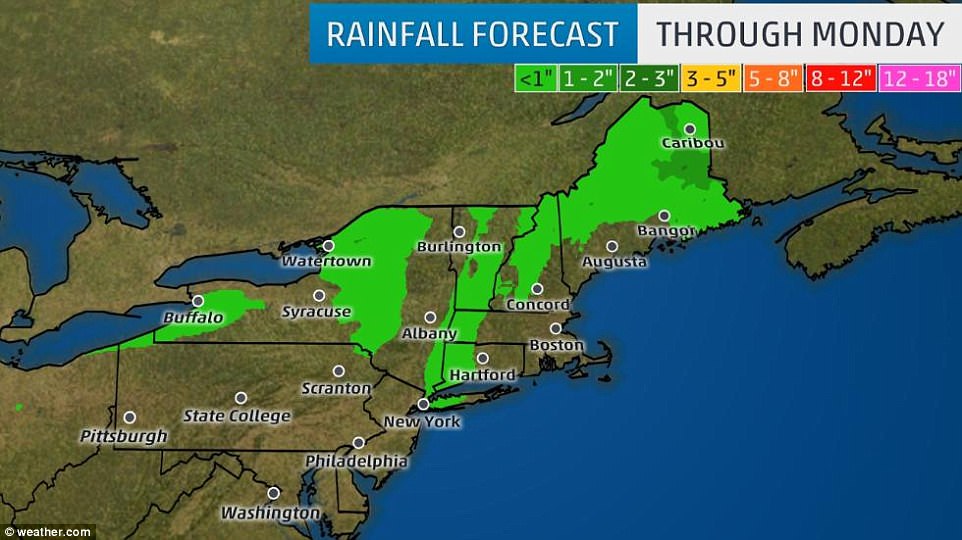 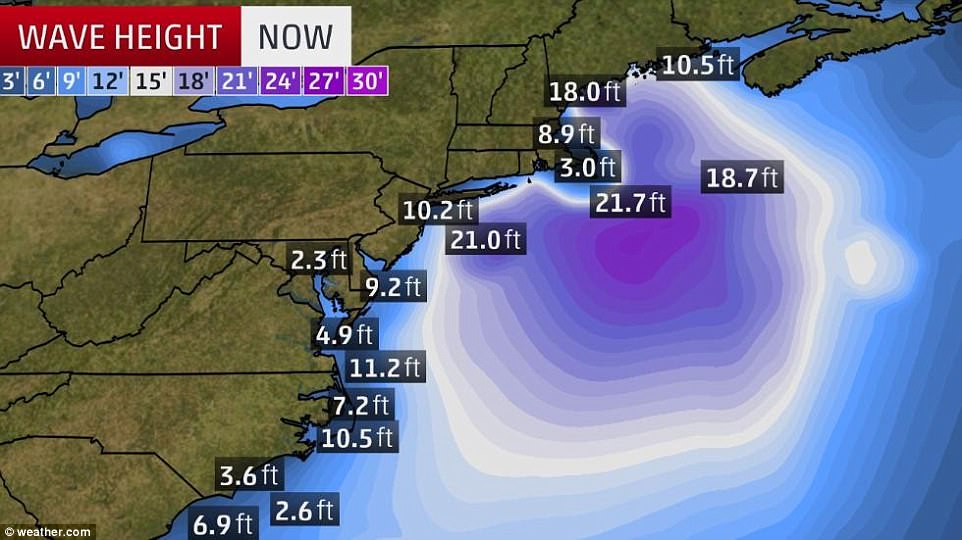 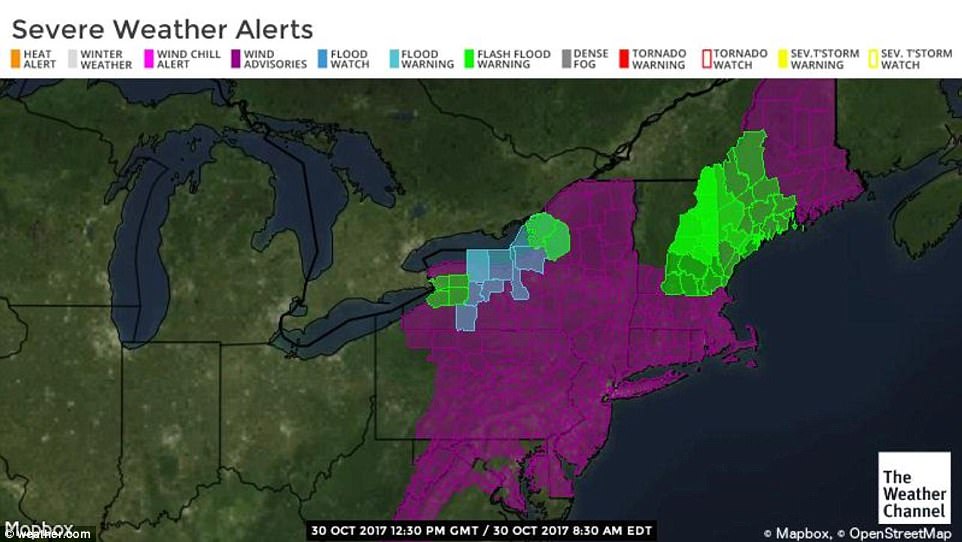 About 22,000 customers were without electricity in both Pennsylvania and New Jersey as the powerful wind and pounding rain swept through and caused a number of delays for commuters.

Flash flood and high wind warnings were issued across the region.

Dellicarpini said parts of Rhode Island and Massachusetts saw wind gusts of up to 70 mph or more. Conimicut Light on Narragansett Bay in Rhode Island reported a wind gust of 81 mph.

‘The area from eastern Pennsylvania and New Jersey to central and eastern New York state to New Hampshire has the greatest potential for flash and urban flooding,’ AccuWeather Senior Meteorologist Alex Sosnowski said.

Rainfall could be as much as five or six inches in some areas hit by the storm. 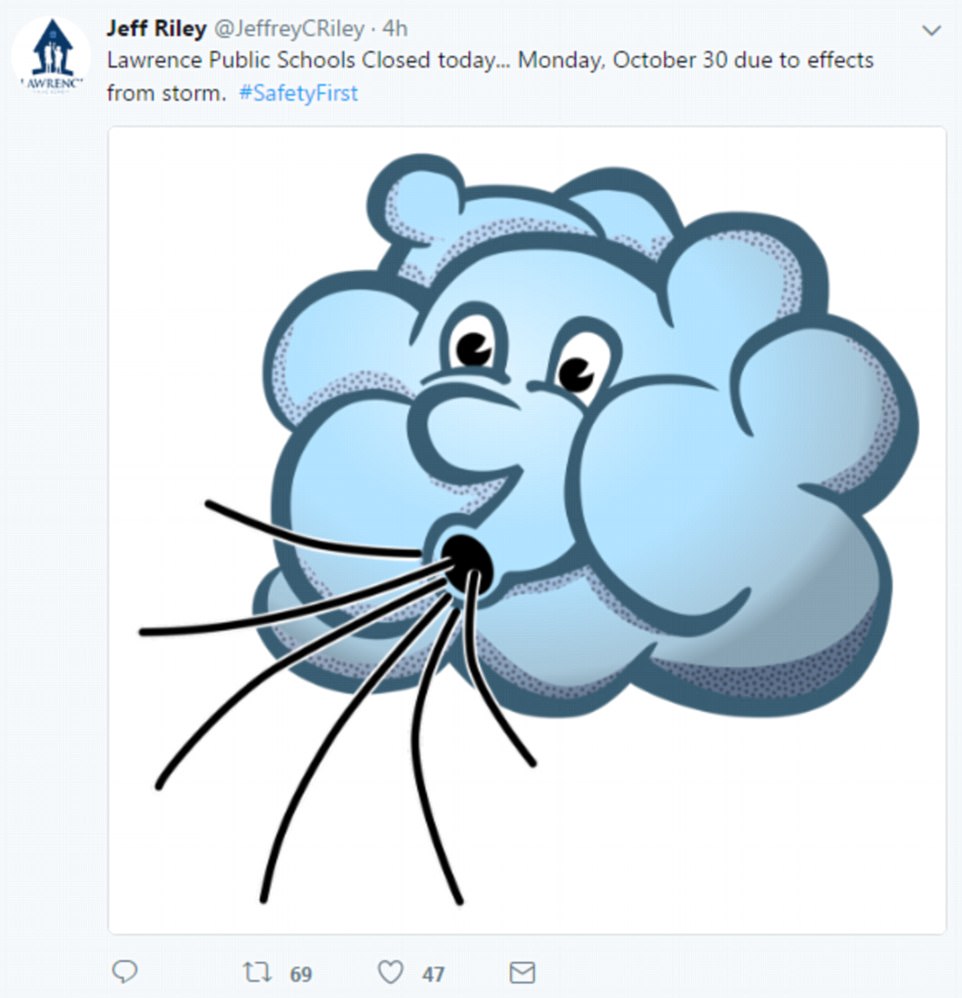 WABC-TV reported a driver trapped in high water in Newark, New Jersey, had to climb out of his car window to escape.

‘I didn’t know it was that deep … just put the window down and got out,’ he told the television station.

The Meriden Humane Society in Connecticut put out a call for volunteers on its Facebook page Sunday night to help deal with flooding in its dog kennels. A couple of hours later, the humane society thanked the volunteers who turned out to help dig a ‘major trench’ to drain water away from the building.

‘We are beyond humbled at the outpouring of support from our community,’ the human society wrote on its Facebook page. ‘Thanks to all of you, our dogs will be sleeping very comfortably and most importantly very dry!’ 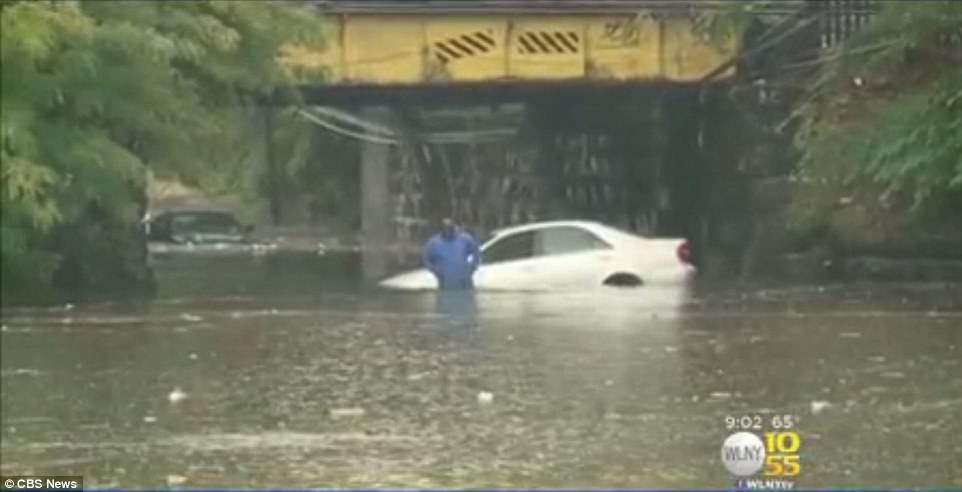 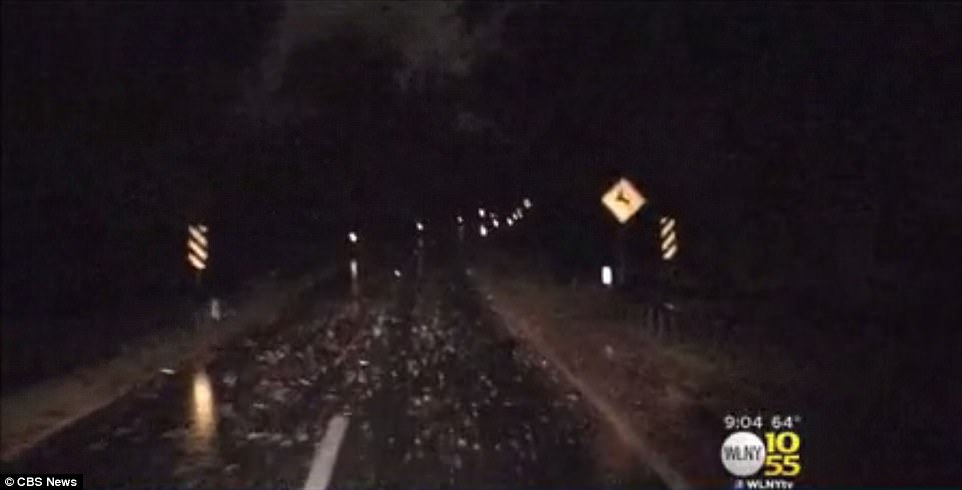 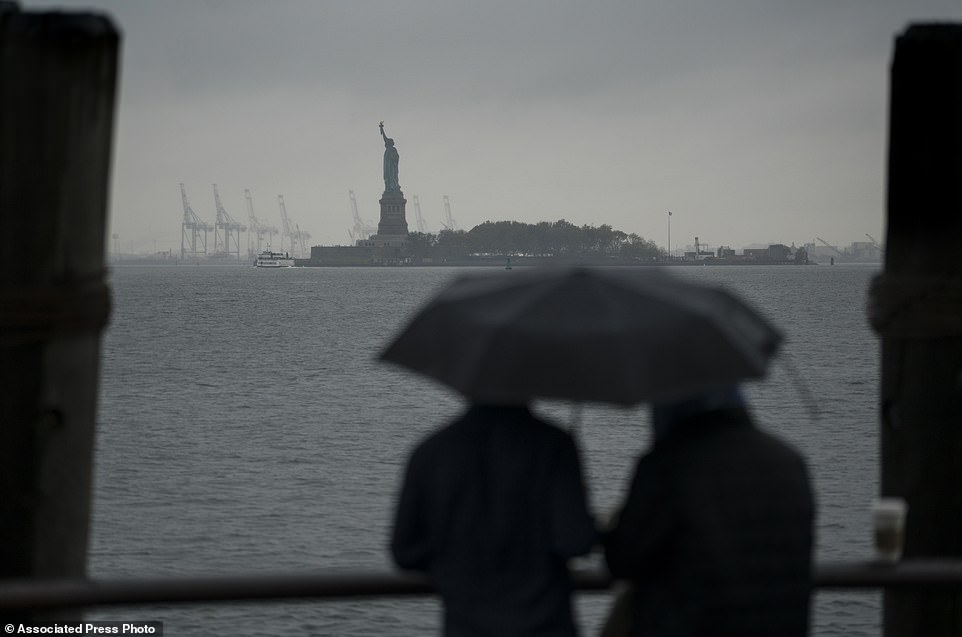 Strong winds and heavy rainfall brought down power lines across the region (Clouds loom over the Upper Bay and The Statue of Liberty as people visit Battery Park in Manhattan, Sunday)

Amtrak Northeast‏ confirmed in a tweet that its service between Boston and New Haven is currently suspended ‘due to power outages from downed trees.’

‘Updates to follow as we work to restore service,’ its statement continued.

Dozens of school districts, including Providence, Rhode Island, Andover, Massachussets, Amherst, New Hampshire and many more across the Northeast, confirmed that schools would be closed or delayed today because of bad weather.

Helene Dunlap, of the Boston suburb of Brookline, said she heard a loud ‘kaboom’ in the early hours of Monday and went outside hours later to find a large tree had fallen on a neighboring home.

‘It really shook the whole place up,’ she said. ‘It was such a dark, stormy night that looking out the window we really couldn’t determine what was going on.’

The storm continued up the East Coast through the early morning hours Monday, to Maine, New Hampshire and Vermont.

The storm began making its way up the East Coast on Sunday, which also was the fifth anniversary of Superstorm Sandy.

That 2012 storm devastated the nation’s most populous areas, was blamed for at least 182 deaths in the U.S. and Caribbean and more than $71 billion in damage in this country alone.