In an interview which was published on the fashion bible’s website on Tuesday, Daniels, 40, talks at length about taking on Trump and Michael Cohen, who paid her $130,000 to keep her claims about their 2006 encounter quiet ahead of the 2016 election.

In an accompanying portrait taken by iconic photographer Annie Leibovitz, she posed in a $4,000 Zac Posen gown with her blonde hair tousled and her make-up paired down.

Speaking of her alleged dalliance with Trump at a Lake Tahoe hotel following a golf tournament in 2006, she joked that it was ‘normal person sex’ which lasted ‘two minutes’ if she is being ‘generous’.

Stormy Daniels appears in October’s issue of Vogue in a $4,000 Zac Posen gown with her attorney Michael Avenatti

‘How many details can you really give about two minutes?’ she said playfully when asked to describe their alleged tryst.

Afterwards, she and her friends would laugh when he called her because he was ‘just The Apprentice,’ at the time, one of her friends told Vogue.

‘I’d be shooting and she’d call me over from the kitchen and say, “Look who’s calling,’ and we’’ start laughing. Donald Trump? Who cared? He was just The Apprentice then,’  photographer Keith Munyan, one of her close friends, said. 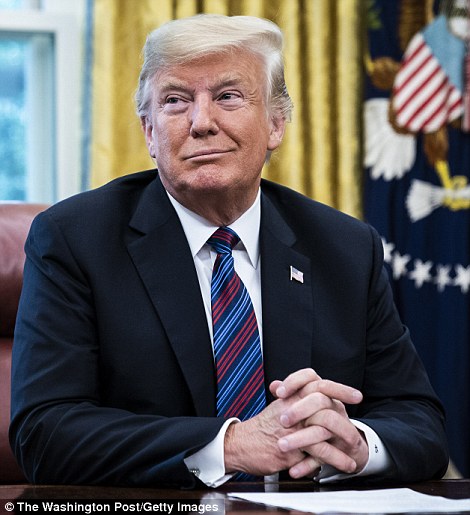 ‘It was just normal person sex,’ Daniels said of her alleged tryst with the president in 2006. Trump (pictured on Monday) denies they ever slept together

Trump has always denied having sex with Daniels whose real name is Stephanie Clifford.

At the time of their alleged encounter, he had been married to the first lady for a year.

Last week, his long serving lawyer flipped on him and admitted paying Daniels $130,000 to keep her allegations to herself ahead of the 2016 election.

For months, Trump said he did not know about the payments. In his plea, Cohen claimed the opposite and said he acted under Trump’s instruction.

Cohen pleaded guilty to campaign finance violations in doing so, among other criminal charges, and is now facing jail time.

Her interview with Vogue was completed months earlier when her fight against the president and his lawyer was still uncertain but others interviewed for it said they all knew about the payment and laughed at Daniels for not taking more money.

At the time, she complained that she was living like a ‘fugitive’ with paparazzi camped outside her home in Texas if she ever stayed put for long enough.

‘We’ve been in a couple car chases.

We’ve had people put notes under the door, which means they know what hotel I’m in, which means we’ve had to change hotels in the middle of the night,’ she said, referring to herself and her lawyer Michael Avenatti.

My fan base is completely different. It’s pretty much these packs of women and they’re like, “You’re going to save the world.”

Avenatti was also photographed by Leibowitz for the interview. The pair jokingly referred to themselves as Thelma and Louise at one stage.

The interview came before Daniels was arrested in Ohio during one of her strip shows.

She was accused of inappropriately touching patrons by slapping their faces with her bare breasts. Avenatti fought the charges successfully and they were dropped.

‘My fan base is completely different. It’s pretty much these packs of women, and they are angry.

‘People come up and they’re so emotional and they put so much on me. They’re like, “You’re going to save the world, you’re a patriot, you’re a hero.”

‘When I started this, I just wanted to save my own a**. Not everybody else’s,’ she said.

She also touched on her estranged relationship from her mother which had been well documented in previous interviews and said her upbringing was ‘neglectful’.