Stormy Daniels made a flying visit to the UK yesterday to judge an amateur stripper contest.

She sat next to fellow judge, and drag artist, Son Of A Tutu who was dressed as Lady Liberty complete with a sign saying ‘Trump F****** Me Too’. 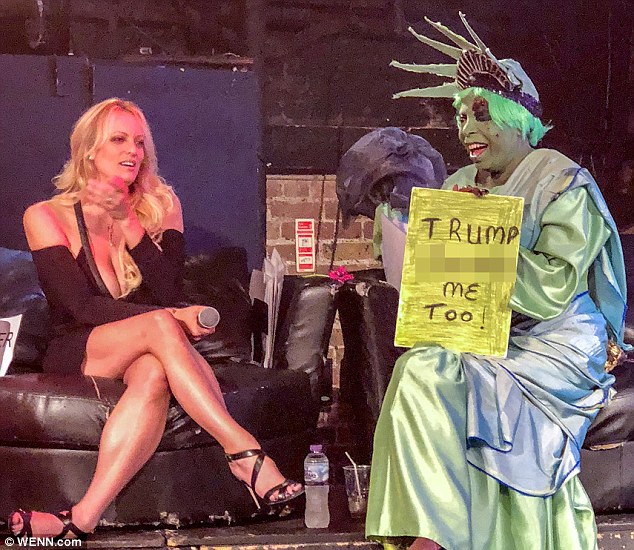 She sat next to a fellow judge dressed as Lady Liberty with a sign saying ‘Trump F****** Me Too’, in reference to allegations the president paid Daniels hush money after sleeping together 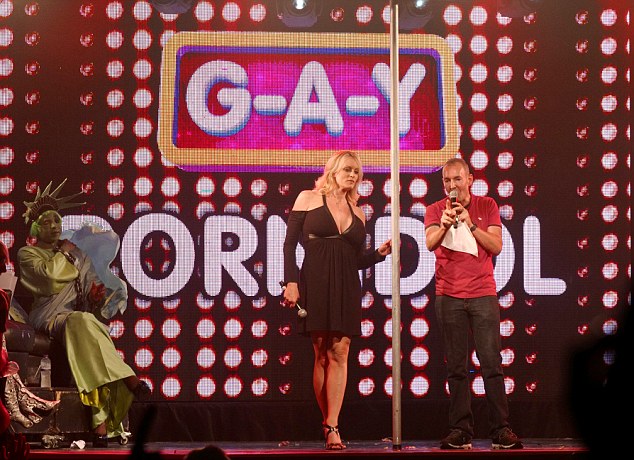 It’s Daniels’ first appearance in the UK since dropping out of Celebrity Big Brother on the show’s launch night.

In March she breached the terms of a non-disclosure agreement she signed with a Trump lawyer in 2016, in which she agreed not to discuss the President in return for a $130,000 payment ahead of his election win.

Prior to the event last night, G-A-Y owner Jeremy Joseph hinted at the ex-adult entertainer’s appearance.

He said: ‘The only clue I’m allowed to give is it’s a G-A-Y weather warning, the clue is weather in the name, but it’s not sunny, it’s not a tornado, it’s not a hurricane, it’s…’

It comes after Daniels claimed that Celebrity Big Brother producers threatened her with deportation if she didn’t go on the British reality show. 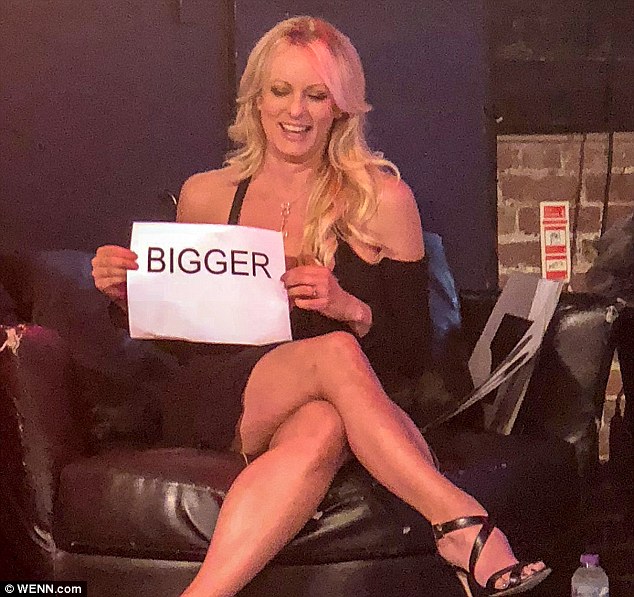 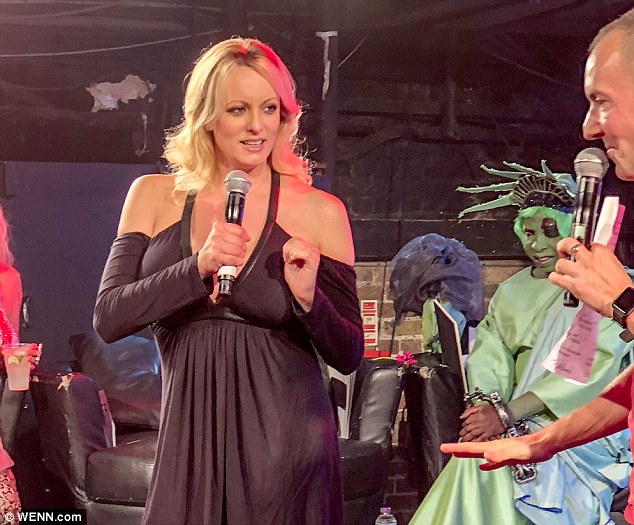 Daniels, whose real name is Stephanie Clifford, earlier claimed a US custody battle over her seven-year-old daughter forced her to quit Celebrity Big Brother

In a tell-all TV interview on Loose Women last week she said: ‘The live show started, I stayed at the hotel and they came back a couple of hours later and they said “you’re either going to go on, stay in the house, follow the contract to a tee or we’re deporting you in the morning”.’

‘No, it was never about the money. Anybody will tell you I don’t care. I was trying to give the money away.’

The American adult film star was due to enter Celebrity Big Brother on the opening night, but pulled out of the Channel 5 show at the last minute, and a scheduled appearance on ITV’s Loose Women the following day also did not go ahead.

In light of claims that she had a furious row with producers over her fee, Rylan Clark-Neal, host of the show’s spin-off Bit On The Side, gave the full insight into what happened and even aired Stormy’s full VT for viewers. 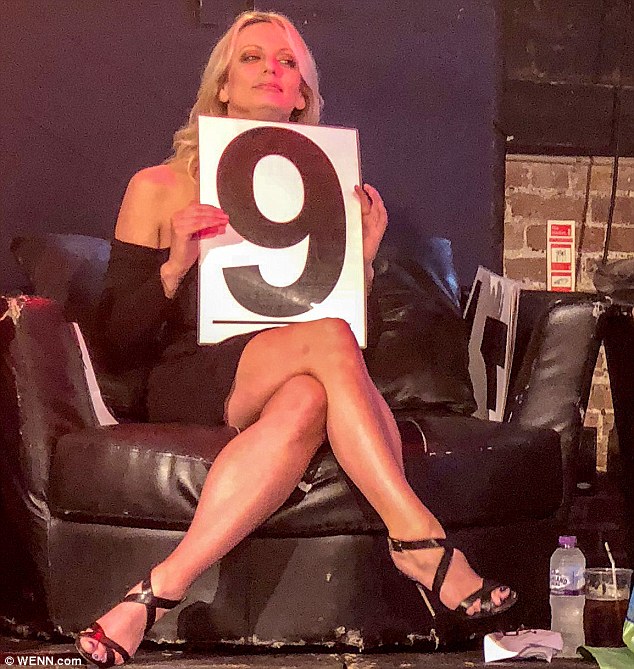 Speaking at the beginning of Celebrity Big Brother’s Bit On The Side, Rylan stated: ‘Stormy Daniels arrived in the UK yesterday morning, and like every other housemate she filmed her profile VT. You should get to see it.’

Immediately Stormy was seen on the screen where she revealed: ‘I’m currently involved in a huge media storm involving the US President.

In March she breached the terms of a non-disclosure agreement she signed with a Trump lawyer in 2016. She agreed not to discuss the President in return for a $130,000 payment ahead of his election win

‘It has been shown on every news outlet around the world and it has drastically changed my life.’

Stormy continued: ‘Everyone loves a good scandal, especially if it involves sex. I think I’m about to prove everyone wrong. I’ve taken on the US President, but now I’m here to take on the Big Brother house.’

Switching back to Rylan in the studio, he continued: ‘Big Brother was thrilled and excited with Stormy, but five hours before Stormy said she wanted to appear only on launch night and leave.

‘We had her, she changed her mind and she went, but remember always remember no housemate is bigger than Big Brother.’

The explanation came after Celebrity Big Brother bosses stopped Stormy from appearing on Loose Women, according to reports.

The blonde was just seconds from going on the show when she was told that appearing on the ITV programme could get her in trouble with Channel 5 bosses. 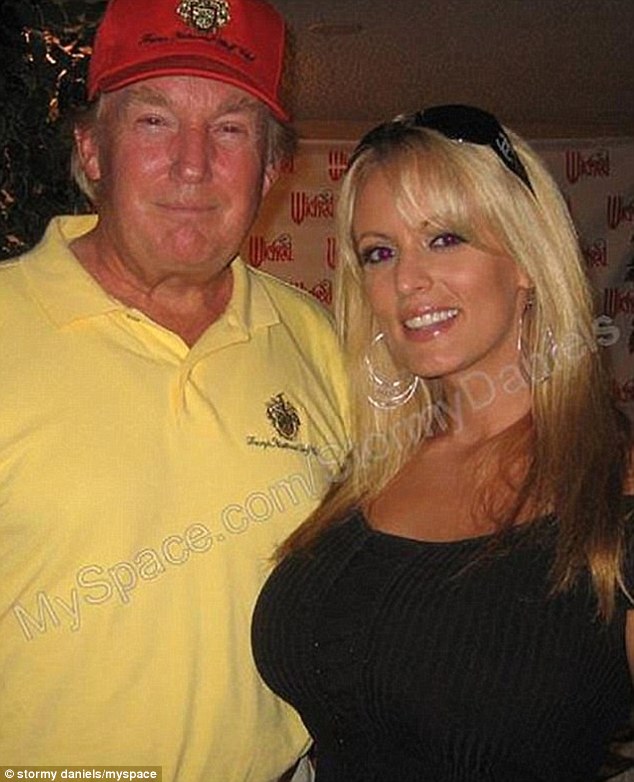 Despite pulling out of CBB, she is still under contract with the show, which means she has to abide by the terms of the contract.

A TV insider told The Sun: ‘Stormy has signed a contract for Celebrity Big Brother.

‘If she breaks the contract they could potentially take her to court. No one wants this to happen of course, but by going on Loose Women she was breaking one of the conditions.

A CBB spokesman said: ‘Stormy Daniels was booked to appear on the show several months ago and hours before the show was due to go live, informed the production team that she no longer wished to enter the house as previously agreed.’

Daniels, whose real name is Stephanie Clifford, earlier claimed a US custody battle over her seven-year-old daughter forced her to quit Celebrity Big Brother – not an attempt to push her fee over $1million.

Stormy, who claims to have had unprotected sex with Donald Trump after spanking him, was set to be the star of what producers promised would be its most-explosive series ever.

However, her lawyer Michael Avenatti told MailOnline: ‘There was never any pay dispute. [That is] completely false.’

‘It was over a row with producers. They insisted she conduct herself in a certain way – they attempted to control her and produce a certain result, which she did not feel comfortable with.’

It is not clear what the new development in the US is, but DailyMail.com revealed that Stormy had been awarded joint custody of Caiden, after initially being ordered to stay away from the child and her estranged husband.