Adult film star and alleged one-time paramour of Donald Trump has scored a spot in the upcoming issue of Playboy that hits stands next week, dubbed the Winter 2019 Freedom of Expression issue.

Both Daniels and Playboy announced the upcoming issue on Tuesday. She took to Instagram sharing a sultry shot of herself dressed in a black ensemble captioning it, ‘I am beyond excited and honored to share this news! I am in the new issue of Playboy.’

Playboy also announced their upcoming magazine which hits stands next week, by sharing a video montage of those featured. In it, a snippet of Daniels’ interview with the publication is featured.

Daniels faces the camera and says ‘You never know what someone’s true story is.’

‘The only thing that Donald Trump has said that I agree with is there is a lot of fake news,’ she added with a laugh.

In Daniels’ Instagram post, she made sure to thank everyone that helped make her dream of being featured come to fruition.

‘This is such a dream come true for me. Thanks to everyone who made this shoot possible…esp DN,’ she concluded. It is unclear who the DN refers to.

Daniels, whose real name is Stephanie Clifford, shot into the political lexicon after coming forward and claiming she had slept with a not-yet-president Trump while his current wife, Melania, was pregnant with their son Barron in 2006.

In the days before the 2016 presidential election Daniels was paid $130,000 hush money settlement for signing a nondisclosure agreement to not discuss the alleged affair.

He also denied knowing about the payment to Daniels, which appears to be untrue after the fallout over his payment to her landed in federal court.

The payment to Daniels was orchestrated by his former personal attorney Michael Cohen.

It is the crime that is most perilous for Trump – who is said to be ‘privately fretting over impeachment’ is Cohen’s campaign violation payments.

Donald Trump, pictured with Stormy Daniels in 2006 during a golf tournament on the week of the alleged one-night-stand 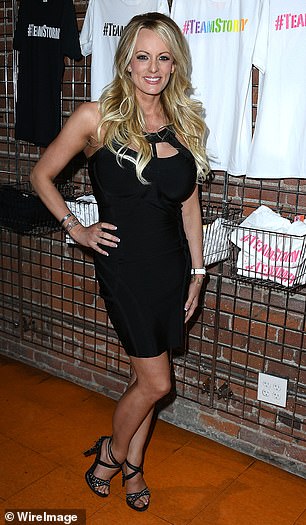 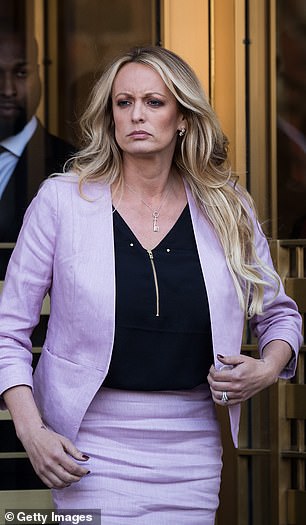 Daniels, pictured at a meet and greet in May and leaving court during one of Cohen’s court hearings in April (left, right) has been vocal about her alleged dalliance with Trump as well as the hush money she was paid just before the 2016 presidential election

Trump initially denied any payment, but last week put forward the defense that it was his lawyer’s job to know the law.

‘I never directed Michael Cohen to break the law,’ Trump wrote on Twitter last week after Cohen was sentenced to three years behind bars.

‘He was a lawyer and he is supposed to know the law. It is called ‘advice of counsel,’ and a lawyer has great liability if a mistake is made.’