Stormy Daniels had dilated pupils during her interview on ’60 Minutes’ on Sunday allegedly because of Benadryl.

Social media users were distracted by the 39-year-old’s appearance despite her shocking claims that she had spanked Trump with a magazine and talked about the first time they’d allegedly had unprotected sex.

Many were left wondering if she had taken certain class A drugs, such as cocaine and ecstasy, or the prescription medication Adderall used to treat attention deficit hyperactivity disorder.

However, Daniels’s attorney Michael Avenatti said she had only taken the popular allergy medicine.

Stormy Daniels had dilated pupils during her interview on ’60 Minutes’ on Sunday allegedly because of Benadryl, according to her attorney Michael Avenatti 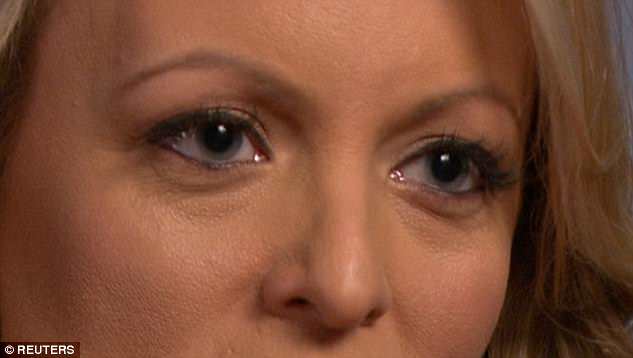 Many were left wondering if she had taken certain class A drugs, such as cocaine and ecstasy, or the prescription medication Adderall used to treat attention deficit hyperactivity disorder 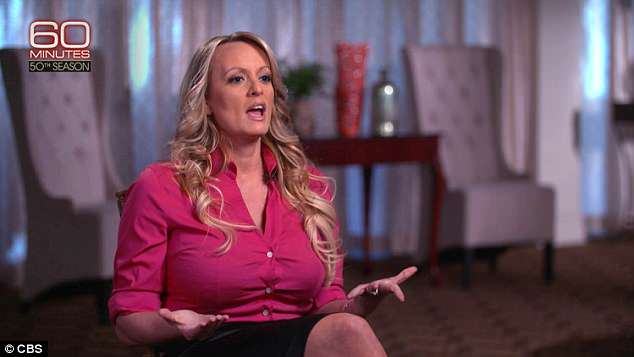 ‘The only drug that my client took within the 24 hours before the interview was a single Benadryl,’ Avenatti told Inside Edition.

He dismissed the claims that she had taken Adderall or other medications as ‘patently false and bogus’.

Twitter users took to the social media site in droves to ponder about Daniels’s pupils.

‘The only thing bigger than #StormyDaniels breast’s [sic] are her pupils,’ one user Ronnie Welsch commented.

‘During the interview with Anderson Cooper, Stormy Daniels’ eyes were very diated. Was she on drugs? Most likely,’ another Twitter user demanded to know.

According to Richmond Eye Associates, anticholinergic medications, the category that Benadryl falls under, can cause side effects such as pupillary dilation. 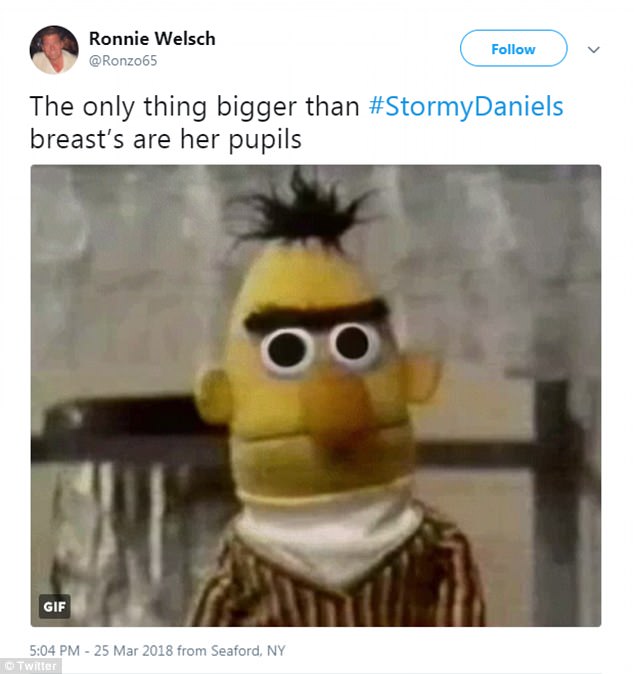 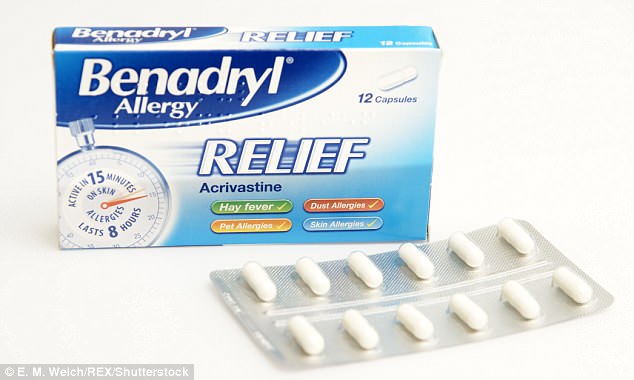 According to Richmond Eye Associates, anticholinergic medications, the category that Benadryl falls under, can cause side effects such as pupillary dilation

‘We want the truth,’ Avenatti said on Thursday on ‘CBS This Morning’.

‘We want to know the truth about what the president knew, when he knew it, and what he did about it.’ 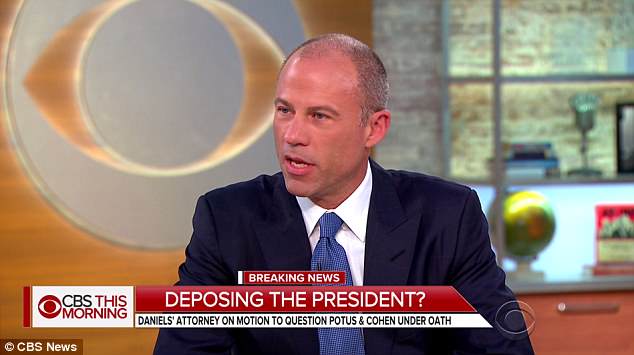 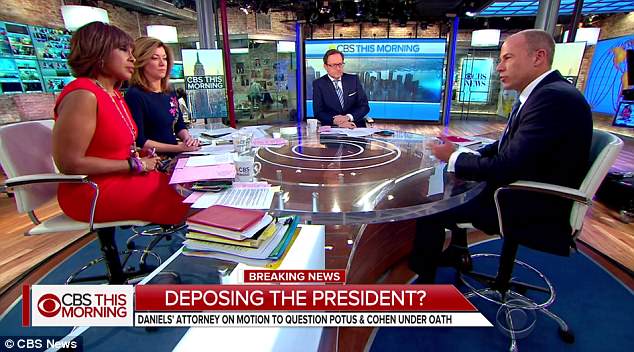 Avenatti said on ‘CBS This Morning’ that ‘we want to know the truth about what the president knew, when he knew it, and what he did about it’ 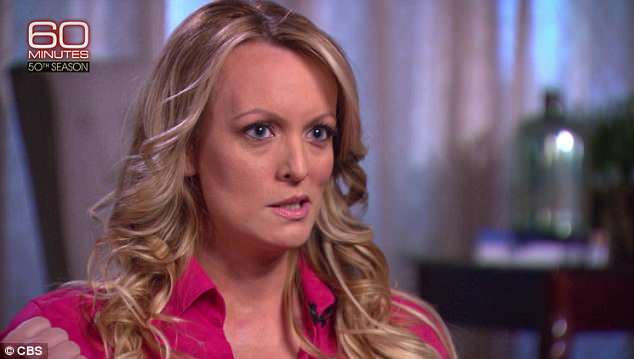 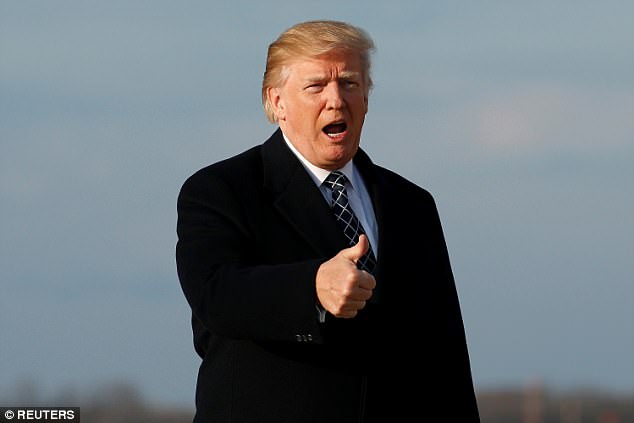 President Trump hasn’t been seen by reporters since Sunday evening, as he returned to Washington, D.C., from Mar-a-Lago, before the 60 Minutes Stormy Daniels interview aired

Asked if the White House had a response to the newest legal maneuvering from Daniels’ lawyer, Huckabee Sanders gave a succinct ‘nope.’

‘We have addressed this once again, extensively, and we have nothing new to add,’ the press secretary said. 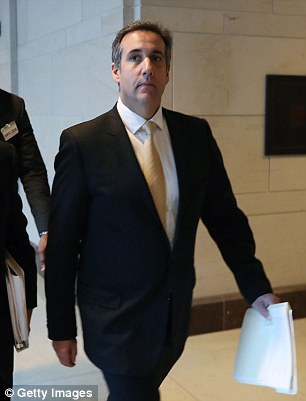 Avenatti suggested Wednesday morning that neither Cohen, nor Trump, was telling the truth.

‘And we’re confident … that when we get to the bottom of this, we’re going to prove to the American people that they have been told a bucket of lies,’ Daniels’ lawyer charged.

When asked if he would be willing to settle the case, Avenatti said he and Daniels would ‘consider it’ depending on the terms.

‘I mean, at this point, I don’t see how the case gets resolved short of the truth coming out and the whole truth for the American people,’ the lawyer added.

A hearing before Judge S. James Otero in the federal court’s Central District in Los Angeles, California is set for April 30.

Avenatti is part of a growing list of lawyers looking to question Trump. Attorneys for a former contestant on one of Trump’s ‘Apprentice’ TV shows have said they want to depose the president as part of a defamation suit.

‘And a guy walked up on me and said to me, ‘Leave Trump alone. Forget the story,” Daniels said. ‘And then he leaned around and looked at my daughter and said, ‘That’s a beautiful little girl. It’d be a shame if something happened to her mom.”

The president has been unusually quiet since the interview aired.

He hasn’t held a public event this week, only seen by reporters returning from Mar-a-Lago Sunday night, shortly before the 60 Minutes episode featuring Daniels was broadcast.

On Monday Trump tweeted, ‘So much Fake News. Never been more voluminous or more inaccurate. But through it all, our country is doing great!’ as Avenatti’s mug was dominating the morning shows.

The White House has pushed back at suggestions that Trump’s behavior is unusual, with Huckabee Sanders arguing Tuesday that the president doesn’t have to ‘punch back’ at every news story.

‘He also has a country to run and he’s doing a great job with that,’ she noted.

When asked about his limited schedule on Wednesday, the press secretary pointed to the fact that the president is traveling to Ohio Thursday to make an infrastructure address.

‘He’s got a major speech tomorrow,’ she said. ‘He’s been incredibly active all week long,’ the press secretary argued.

And while new polling from Politico/Morning Consult indicates that a majority of Americans believe Daniels’ story of the sexual encounter, Trump’s poll numbers haven’t shot down.

This week 42 per cent of registered voters approve of the job the president has done, which is largely unchanged from the 44 per cent of respondents who felt that way last week.