Straight couples will be able to enter into civil partnerships

Straight couples WILL be able to enter into civil partnerships instead of getting married, Theresa May reveals

Straight couples will be able to use civil partnerships for the first time, Theresa May announced today at the Tory conference.

The Prime Minister said that for the first time gay and straight couples would all have access to the same life choices.

Civil partnerships were created in 2004 in response to demands from gay people to be able to get married.

Straight couples will be able to use civil partnerships for the first time under a change to the law, Theresa May (pictured today at Tory conference) has announced

They offer similar benefits to marriage without using the legal or religious basis of the institution but were never available to straight couples.

The introduction of full gay marriage in 2014 led to demands for all couples to be allowed access to both systems.

Mrs May told the Standard: ‘This change in the law helps protect the interests of opposite-sex couples who want to commit, want to formalise their relationship but don’t necessarily want to get married.

‘As Home Secretary, I was proud to sponsor the legislation that created equal marriage.

‘Now, by extending civil partnerships, we are making sure that all couples, be they same-sex or opposite-sex, are given the same choices in life.

Britain’s system was ruled illegal on human rights grounds by the European Court earlier this year paving the way for today’s announcement. 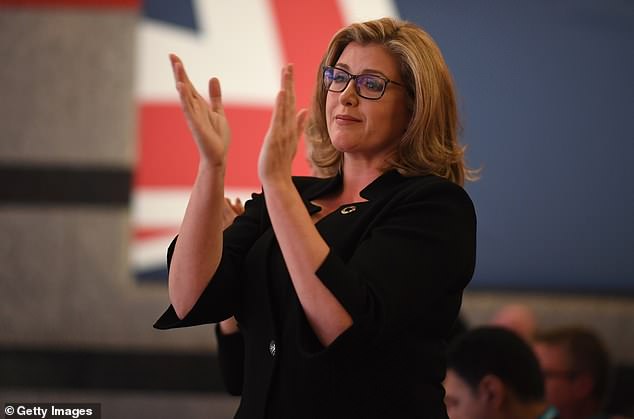 Equalities Minister Penny Mordaunt (pictured at Tory conference on Sunday) hailed the planned reform today, saying there were many reasons why couples might choose not to marry

There are more than three million couples in Britain who live together without being married.

No marriage means few rights for a ‘spouse’ following separation or death, particularly in relation to property.

Equalities Minister Penny Mordaunt said: ‘There are all sorts of reasons why people may choose not to marry.

‘By giving couples this option we hope to give them and their families more certainty and security.’