It’s A Sin writer Russell T Davies has urged Hollywood stars to turn down gay roles in films and instead encourage producers to instead cast an LGBT actor.

The 57-year-old producer said famous gay actors ‘don’t exist to lead blockbusters’ and straight actors must ‘step aside’ to help them get more opportunities.

All the gay characters in his Channel 4 drama, which chronicles the lives and deaths of a group of friends in the 1980s AIDS epidemic, are played by LGBT actors.

But Swansea-born Davies, who is gay, admitted his house was ‘built off straight people who played gay parts’ and said any change has to begin at ‘ground level’.

It comes a month after Davies caused much debate after claiming only gay actors should play gay characters in film and TV to ensure an authentic portrayal. 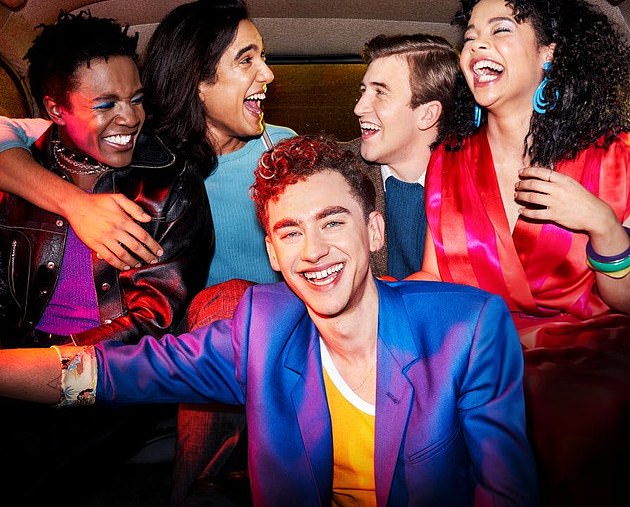 All the gay characters in Channel 4’s It’s A Sin are played by gay actors. The series follows three gay 18-year-olds who arrive in London in 1981, at the beginning of the HIV epidemic

Speaking on Damian Barr’s Literary Salon last night, Davies said he ‘genuinely regrets’ if he upset actors who are playing gay roles with his comments in January.

But he added: ‘The problem is if you’re a famous actor, let’s look at the famous ones, and I mean movie star levels, I think now, I’ve gone on the attack, if you’re a movie star level, you’ve got money, you’re fine, you’re going to get lots of offers.

Andrew Scott: Gay actors have won critical acclaim for their portrayal of heterosexual characters – most notably Andrew Scott for his turn as the ‘Hot Priest’ in Phoebe Waller Bridge’s hit show, Fleabag.

After he played Waller Bridge’s love interest in the second season of her show, the phrase, ‘Can you have sex with a Catholic priest?’ became one of the most googled terms of 2019.

Luke Evans: The Welsh actor Luke Evans, who recently split with his boyfriend, won ‘Best Villain’ at the 2017 Teen Choice Awards for his portrayal of the Lothario Gaston in the live-action remake of Beauty and the Beast.

Ben Whishaw: The revered stage and film actor has been nominated for, and won, dozens of awards for his depiction of characters including Hamlet, Richard II and Q in James Bond. He also played Keith Richards in the Rolling Stones biopic, Stoned.

Jim Parsons: The actor came out publicly in 2012 in a New York Times profile. He won several awards for playing Sheldon Cooper on the CBS show, The Big Bang Theory. The role saw Parsons become one of the highest paid actors in the world, earning $1million per episode. In the series, Sheldon marries fellow scientist Amy.

Zachary Quinto: The actor came out in 2011. He is perhaps best know for his turn as Spock in the Star Trek films.

‘I think if you get offered a film in a gay role, you should turn it down, and you should take those production companies by the hand and say ‘I’ve got a lot of clout, I’ve got a lot of people, come with me to raise money over here, and I will help you get a gay person into the leading roles’.

‘Because the problem is, if you don’t start at the bottom with young kids, like the cast of It’s A Sin – I’m looking at the top now, because the truth is there are no leading gay men or leading gay women who can finance the production, and there never will be unless those straight actors step aside.

He added that this then sees the industry ‘caught in a loop’, because ‘people will stop making gay productions’ if leading straight actors are turning down gay roles ‘because it’s all about money’.

Davies said: ‘So then they’ll say, ‘well we can’t get a lead actor to do this, we can’t get anyone who raises money to do this’, and then they’ll come knocking at my door saying ‘my film can’t get made because of you and your proclamations’, and doesn’t that show how unequal it is, doesn’t it?

‘Doesn’t that show how any notion of equality is paper thin, it’s compost thin, it’s s*** thin, it actually isn’t equal at all, once you start to realise that the financing collapses and the films will stop being made because the gay actors aren’t there.

‘That’s why you have to start at this level, at the ground level, at a Channel 4 drama going out on a Friday night, yes it’s been successful, but it’s actually quite bread and butter television in that sense – it’s exactly what Channel 4 should be making.

‘So you have to create people at this grand level, you have to take someone like Olly Alexander who I think is an absolutely superstar, Callum, Omari, Nathaniel, all of them and brilliant, lovely David Carlyle who’s Gloria, I don’t think he gets enough credit. Absolutely wonderful. 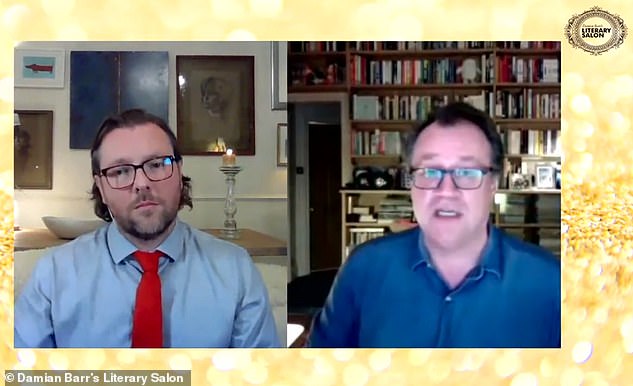 ‘Create them now, create those stars so that in ten years’ time maybe Olly Alexander will raise the money – and that’s a hard thing, I mean raising $30million for a film, no businessman wants to waste that money.

Russell T Davies said earlier this week that he has ‘given up’ fighting for the BBC and believes the broadcaster is ‘doomed’ if the government continues to slash funding.

The Doctor Who writer has continually warned of the dangers facing the broadcaster if the government try to reform the licence fee funding model into an ‘opt-in’ service like Netflix , he told That Gaby Roslin Podcast.

The writer besaid that drama is enjoying a golden age, but suggested that UK broadcasters, under threat from US streaming giants, are in a perilous position.

Davies made the comment when Roslin asked him how he felt about being credited with ‘saving’ television ‘from extinction’, thanks to the success of his TV shows.

‘Is it heading that way (to extinction)?’ Roslin asked.

The screenwriter answered: ‘I think the BBC is, right now in front of us, I don’t think it (TV) is. We’re in a golden age for drama, the amount of author-owned, personal drama pieces that are being broadcast is ten times the number than in the Sixties.’

He said: ‘People say Play For Today was the height of television. We’re getting series like that every week now, not quite every week. But it’s in a glorious state.’

‘So you have to do this, you have to start here, because nothing is moving at the top, and that proves it’s massively unequal. ‘It’s fair, it’s balanced, gay can play this, straight can play that’ – no, it’s not remotely fair, there is no balance. It needs work, it needs an attack.’

It’s A Sin follows the stories of three gay 18-year-olds who arrive in London in 1981, at the beginning of the HIV epidemic, and its star-studded cast includes Olly Alexander, Neil Patrick Harris, and Stephen Fry.

Davies, who was behind Doctor Who’s 2005 revival, said last month that directors must cast gay men to play gay male roles because you ‘wouldn’t black someone up’ in the modern day.

He insisted he was ‘not being woke about this’ and said the idea of ‘acting gay’ is just a ‘bunch of codes for a performance’ and is not authentic.

Queer as Folk, about the lives of three men in Manchester, was Davies’ first gay TV drama – and he cast straight actors in the role.

He previously said It’s A Sin – which began filming in October 2019 and was released last month – is loosely influenced by his own life.

The writer was just 18 when the HIV crisis began in 1981, but he did not contract the disease.

He has previously cast gay actors in roles where they played gay characters – including Russel Tovey in Years and Years, and John Barrowman in Torchwood.

Tovey spoke out in 2018 after Jack Whitehall faced criticism for being cast as a gay character in the Disney movie, Jungle Cruise.