Straight out of Narnia, a £200,000 treehouse with a magic wardrobe

Once all you needed to build a treehouse was a few planks of wood and a sturdy branch.

Only in a child’s dreams would it end up as elaborate as this – a two-storey treetop wonderland with a 40ft slide winding, Narnia-like, out of the back of a wardrobe.

Of course, you’d expect nothing less at Chelsea Flower Show, which offered VIPs a preview yesterday and is expected to welcome at least 150,000 visitors this year.

The treehouse, made mostly of cedar and oak, comes with a spiral staircase and underfloor heating – and costs between £150,000 and £200,000. 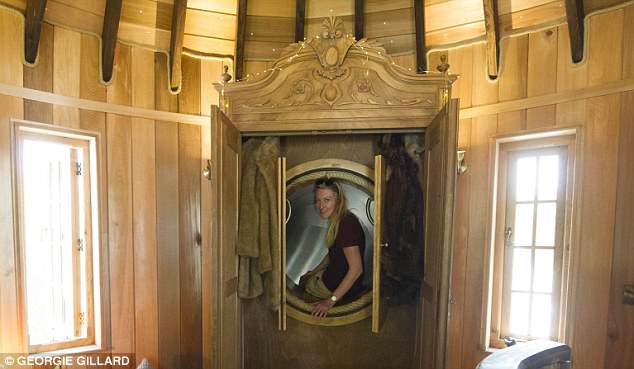 Because it weighs five tonnes, the structure cannot be supported by a tree alone and must be screwed into the ground.

This means that – unlike the treehouses put together with a few bits of wood, string and plenty of Dad’s blood, sweat and tears – you need planning permission to install it. This version was created by Blue Forest, whose clients have included author JK Rowling and film director Guy Ritchie, and was commissioned by a British family.

Simon Payne, director of Blue Forest, said: ‘I don’t think this is spoiling children, it is a lot more fun than buying a luxury car.

‘For families it is about getting away from the television and spending time together.’

With the children occupied in their treehouse, mums could be left longing for their own space at the bottom of the garden. 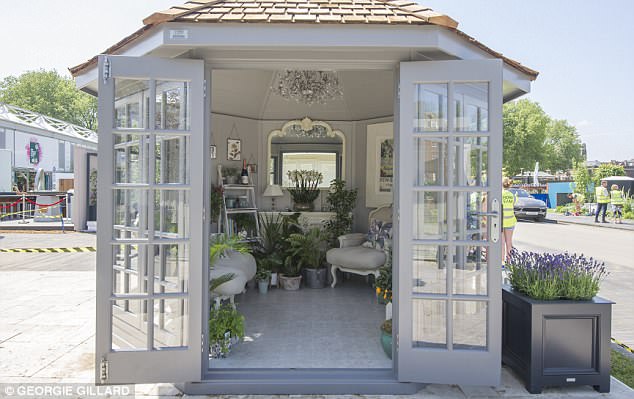 Malvern Garden Buildings has created the ‘She Shed’ decorated with feminine-associated items such a chandelier, fancy mirror and elegant sofas 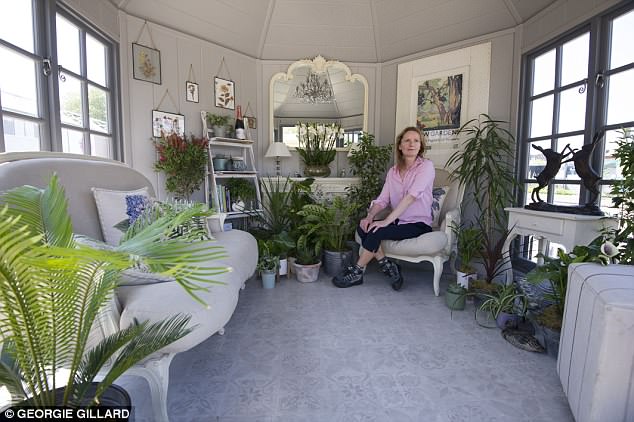 Ann Kilgannon, 45, from London sits in the Malvern Garden Buildings ‘She Shed’

A quick look around Chelsea finds that shed makers are cashing in on a growing female market with ‘she sheds’ kitted out with chandeliers, ornate mirrors and sofas.

One of the most luxurious on offer is the Kew Imperial, made by Malvern Garden Buildings and priced at just under £16,000.

It looks more like a cosy living room than a place to store your secateurs.

In a tasteful dove grey, it appeals to women looking for a calm corner to call their own. Radiators mean it can be used all year round.

Jason Preece, of Malvern Garden Buildings, said demand for ‘she sheds’ was booming, with some used as sewing studios and therapy rooms and others simply to escape the bustle of daily life. He added: ‘We now have requests for ‘she sheds’ as much as men’s sheds.’ Yesterday the Queen and Prime Minister Theresa May joined guests Felicity Kendal, Dame Esther Rantzen and Alan Titchmarsh for a sneak peek at the show, which opens today and runs until Saturday.