Newlyweds have been sent stunning photographs of their sunset wedding  – after a stranger took pictures and tracked them down on Twitter.

Nevona Friedman, 26, captured the moment the couple exchanged vows with no witnesses on Brooklyn Bridge on Sunday evening.

She was on a stroll with her boyfriend when she realized the couple did not have a wedding photographer, reported the New York Post.

‘I realized there was no one else there — no family watching or photographer. I really can’t imagine getting married with no photos.’

Ms Friedman lined up the perfect shot, showing the couple staring into each others’ eyes in front of a stunning orange skyline.

She later posted it online with the caption: ‘If you were getting married on the Brooklyn Bridge this evening, I’ve got some photos for you!’

Nevona Friedman, 26, captured the moment the couple exchanged vows with no witnesses on Brooklyn Bridge on Sunday evening

Eventually a friend of the newlyweds saw the post and Ms Friedman was able to send them their only wedding photographs.

And the couple, artist Nikolina Kovalenko, 32, and Stefan Ponova, 30, have since shared their incredible love story.

The newlyweds married exactly a year after meeting while salsa dancing in Colombia.

They immediately shared an ‘amazing connection’.

Nikolina was leaving the next morning to travel through South America and joked Stefan should meet her at the bus stop. 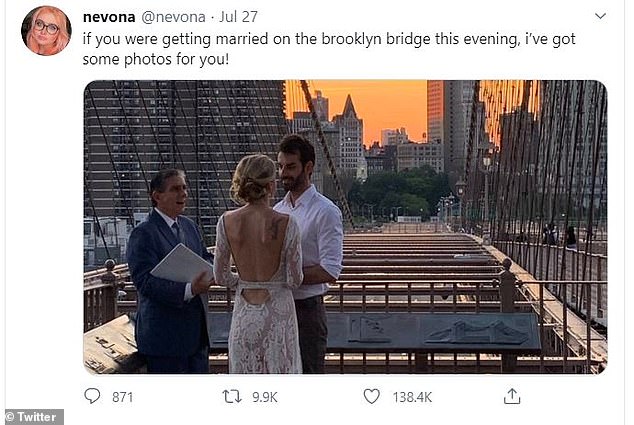 Ms Friedman lined up the perfect shot, showing the couple staring into each others’ eyes in front of a stunning orange skyline. She later posted it online

At 6am the next morning he was waiting for her.

They shared a ten-hour bus journey, trekked through the glaciers of Patagonia and enjoyed the beaches of Brazil before heading to New York City at the start of the coronavirus pandemic.

‘We went from one exciting story, I guess, to a very interesting situation here,’ Kovalenko told the Post. ‘But we didn’t feel claustrophobic being locked down together. We just felt like we were connecting even more.’

The couple started their wedding day at their favorite brunch spot Cafe Zona Sur near their home in Sunset Park, Brooklyn. 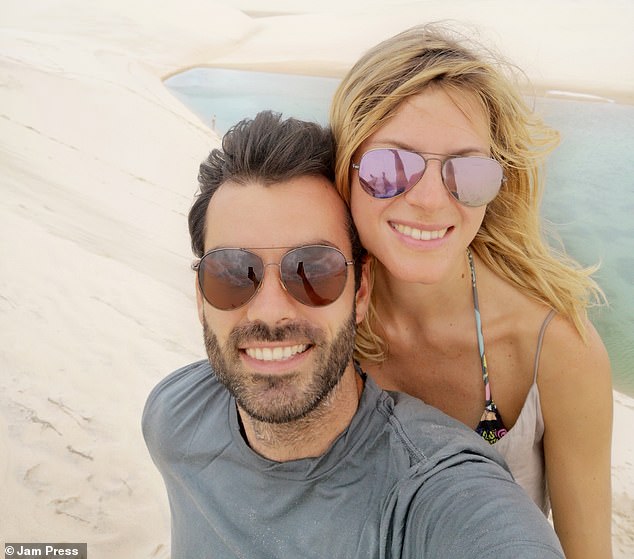 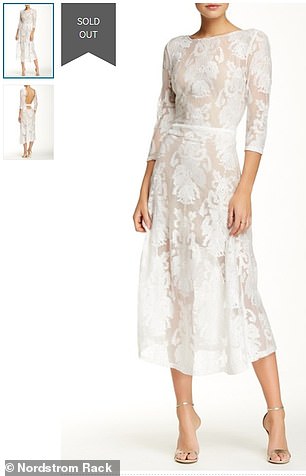 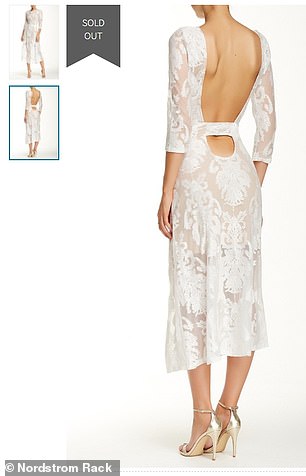 Women were fascinated by the bride’s dress, a For Love & Lemons white maxi ensemble with a plunging back

They walked the four miles to the bridge and met an officiant in the center, with the idea of walking off at the other end as man and wife.

After the wedding they enjoyed champagne and were so distracted by talking about their future together they missed their dinner reservation.

Comments soon rolled in as Twitter users congratulated the couple.

One said: ‘This is really all you need when you get married. You & your intended, starring so deeply into each other’s eyes that you don’t care about the view behind you. The rest of the wedding show isn’t necessary if you have that.’

Another added: ‘I’m in love with the story and I don’t even know it! The way he’s looking at her, the fact they just them two and one other person, that has the be the way to explain that love is humble, simple, beautiful and pure.’

Others praised Ms Friedman for taking the photographs: ‘Beautiful photo. You are a really good person doing this. Thank you for being you.’ 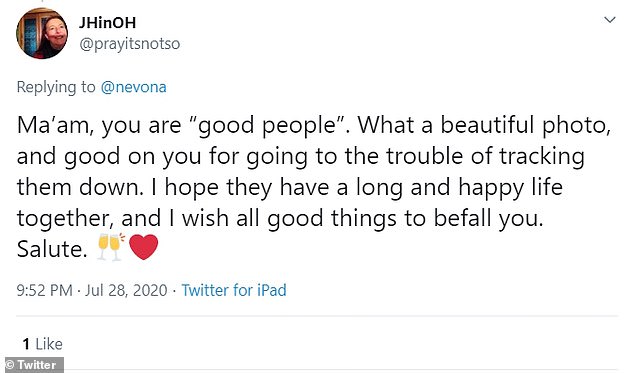 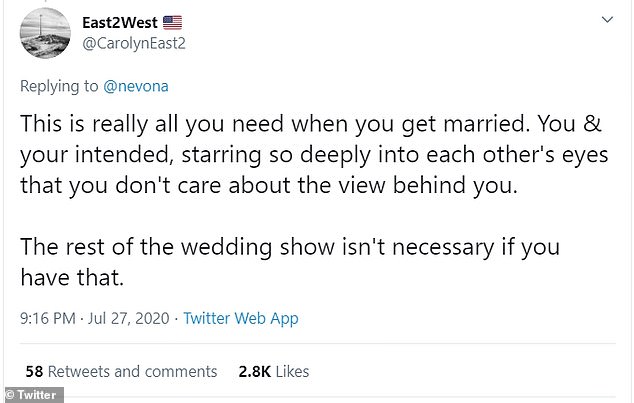 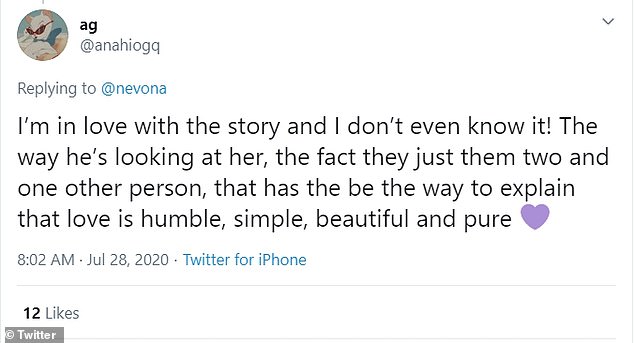 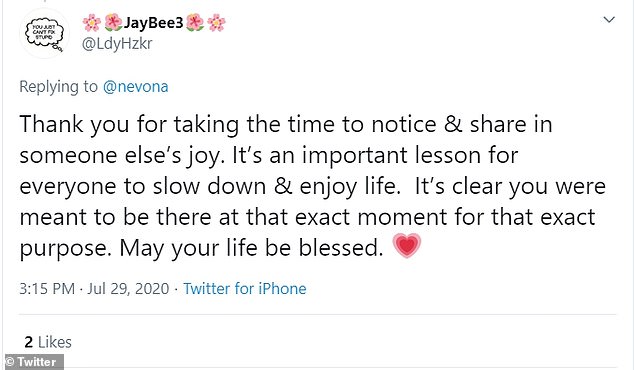 ‘How lovely. You were meant to be there. That photo will give them joy that will last a lifetime,’ one wrote.

One said: ‘This photo is an entire romance novel and the beautiful satisfying ending so I’m a sucker and crying. And this dress.’

Women were fascinated by the bride’s dress, an ankle-length For Love & Lemons white ensemble with a plunging back. 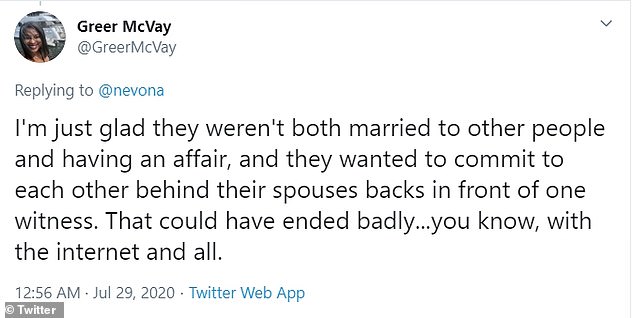 Other users were suspicion, asking whether the couple could have been spies or conducting an extra-marital affair

Another user was suspicion, asking whether the couple could have been spies. They wrote: ‘What if they’re like, spies, and their wedding was private for a reason and now they’re scrambling to find a coverup.’

Other conspiracies included the possibility the couple were having affairs behind their partner’s back.

One wrote: ‘I’m just glad they weren’t both married to other people and having an affair, and they wanted to commit to each other behind their spouses backs in front of one witness. That could have ended badly…you know, with the internet and all.’