Cherif Chekatt, 29, is being hunted by French police after opening fire at a Christmas market in Strasbourg this week, killing three

Heavily armed police swooped on the Neudorf neighbourhood of Strasbourg on Thursday amid a massive manhunt for the Christmas market shooter.

Police cars blocked a street as officers wearing helmets and body armour and carrying rifles gathered in the road on Thursday afternoon.

Officers are hunting for 29-year-old Cherif Chekatt who killed three people and wounded 12 before during an attack on the city’s Christmas Market on Tuesday before fleeing.

Some 720 police and gendarmes have been scouring a huge section of eastern France using helicopter sweeps, roadside checks, border surveillance and house searches, but thus far have uncovered no trace of Chekatt.

Another 500 troops have been sent to guard public places including Christmas markets amid fears Chekatt will attack again, with 1,300 more due to join soon.

A government spokesman confirmed authorities have been told to capture Chekatt ‘dead or alive’, and that the most important thing is that he is found quickly.

There are fears that he could have fled into Germany, where he has a history of arrests, and searches have spread across the border.

Officers have warned that Chekatt, who has been convicted 27 times starting when he was just 13, should be considered dangerous and not to approach him.

On Thursday Le Parisien also revealed that, during a prison stay in 2008, Chekatt hung a picture of 9/11 mastermind Osama bin Laden on his wall.

Chekatt was put under observation by anti-terror police and was still being watched at the time he committed his attack, but didn’t show ‘any obvious signs’.

It was also revealed that 45-year-old Anupong Suebsamarn, who was shot dead at the market, had not intended to be in Strasbourg at the time. 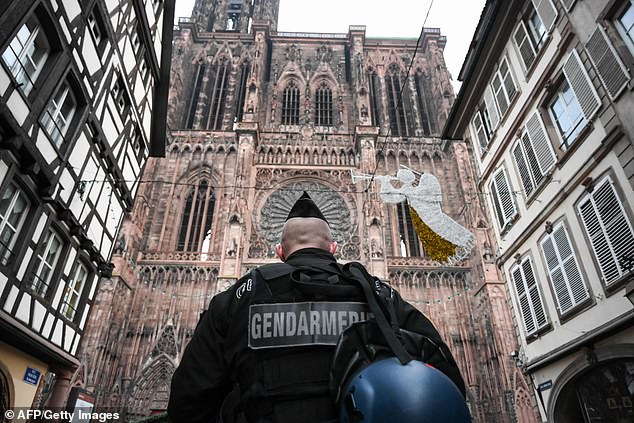 In total 720 police and gendarmes have been searching for Chekatt across a vast swathe of eastern France, using helicopters, roadside searches and border surveillance 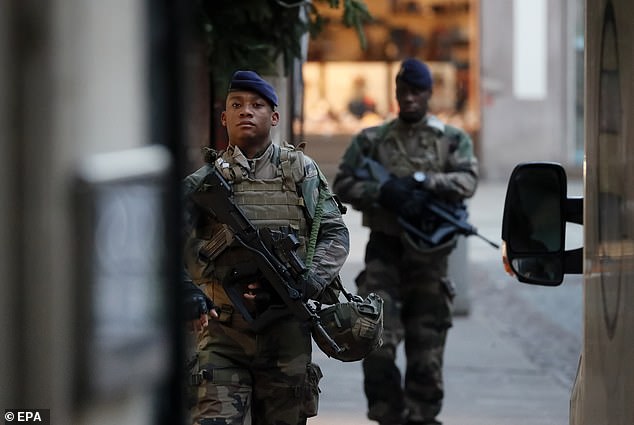 Hundreds of troops have also been drafted in to guard public places, including Christmas markets, amid fears Chekatt will attack again 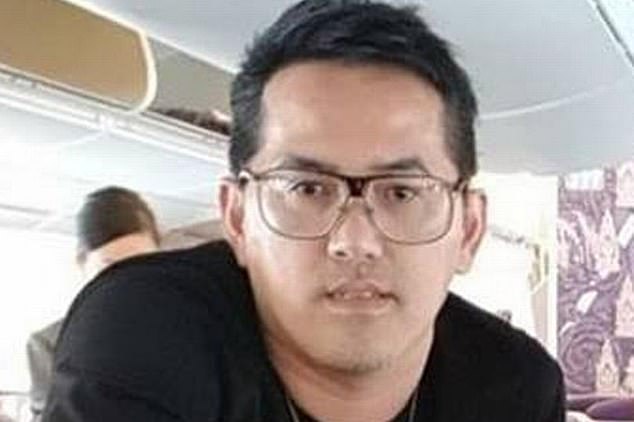 Anupong Suebsamarn, 45, who was shot dead at the market had not initially planned to be there and was supposed to be in Paris, but changed his plans at the last minute

Suebsamarn had been planning to go to Paris with his wife, but had changed plans at the last minute because of the Yellow Vest protests, which have seen some of the city’s busiest landmarks paralysed by rioting.

The fatality is reported to be a Frenchman who was a former employee of Crédit Agricole who was shot in the head.

After initially reporting that three people had died, authorities revised that and said one was brain-dead, while 12 people were wounded, six of them gravely.

One Italian, 28-year-old Antonio Megalizzi, was reported to be in critical condition.

Italian daily La Repubblica reported he was in Strasbourg to follow the session of the European Parliament.

An Afghan car mechanic named only as Kamal was also among those in critical condition after being shot in the head, according to Dernieres Nouvelles D’Alsace.

Leaders of the mosque he attended initially said he had died after falling into a coma, but this was never confirmed by authorities.

Meanwhile L’Est Républicain reported that two people from eastern France were injured in the attack, one of whom was shot in the back of the neck and was in intensive care.

The other is an 18-year-old woman who has been operated on and is now recovering.

Strasbourg-based art collective Mimir told Les Dernières Nouvelles d’Alsace that two of their members, both musicians, were injured near the Savons d’Hélène café where they were performing.

One of them, a percussionist, was shot in the neck and is in a coma. The second, a guitarist, was also injured, but less severely.

A third man, also with links to Mimir is seriously wounded in the head. 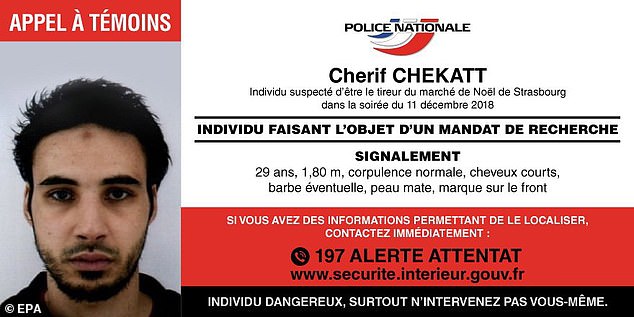 French police have appealed for members of the public to look for Chekatt and to contact them if they have information, but not to approach him 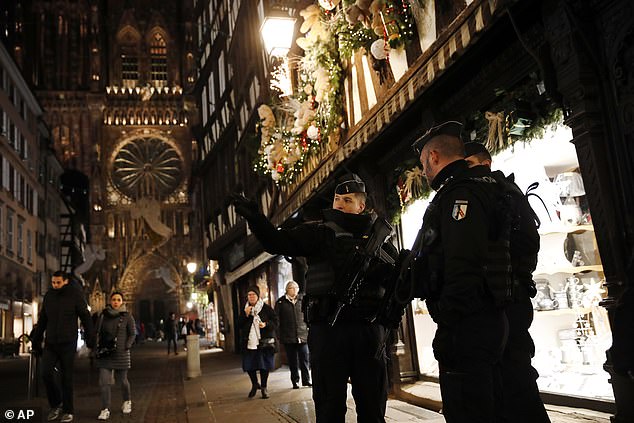 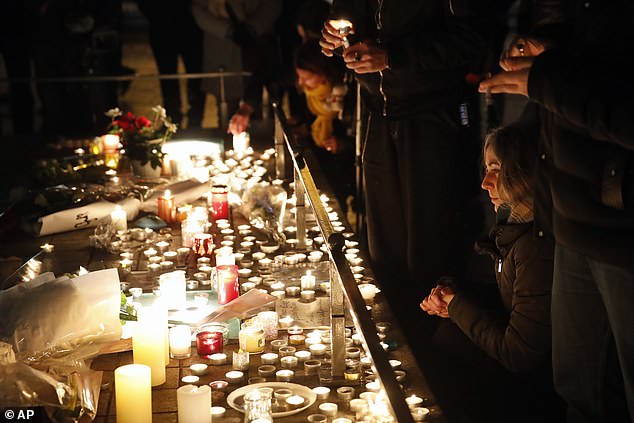 Candlelit vigils were held in Strasbourg for the victims of the shooting on Wednesday. Three people died, one was left brain-dead, and 12 more were wounded 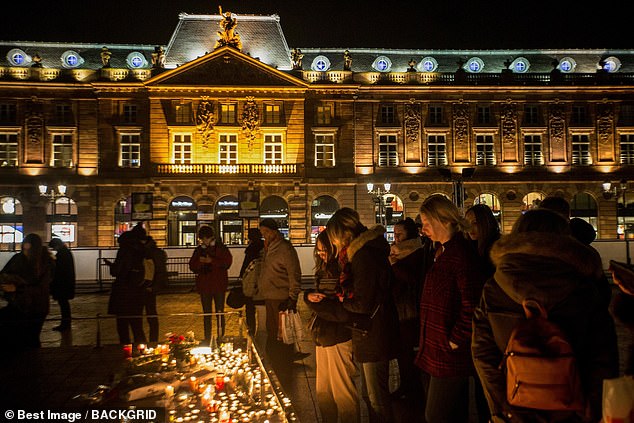 People lay candles and flowers in tribute to those who died in Place Kléber, in Strasbourg

Yellow Vests urged to stay off the streets

The French government has urged Yellow Vest protesters to hold off another round of demonstrations scheduled to take place in Paris this weekend.

Spokesman Benjamin Griveaux said ministers decided against banning the marches outright, but asked people to be ‘reasonable’ amid a massive manhunt for Strasbourg shooter Cherif Chekatt.

It comes after conspiracy theorists accused the government of staging the terror attack in order to quash the Yellow Vest movement. 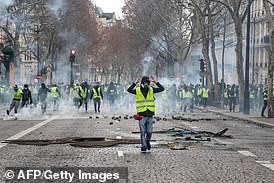 President Emmanuel Macron has already offered the marchers a £9billion package of concessions including pay rises and tax cuts.

But many complained that the measures were too little, too late, and vowed to continue with weeks of protests, which have often turned violent.

‘Our security forces have been deployed extensively these past few weeks,’ Griveaux said, while insisting that ‘it’s not up to us to say if the movement should be called off or not.’

In the wake of the Strasbourg attack, ‘it would be better if everyone could go about their business calmly on Saturday, before the year-end celebrations with their families, instead of demonstrating and putting our security forces to work once again.’

Last Saturday nearly 90,000 police were mobilised across the country for the protests, with 8,000 officers and a dozen armoured vehicles deployed in the capital where scores of stores, museums and monuments were closed.

Amid the hunt for Chekatt, France raised its three-stage threat index to the highest level and bolstered troops around France.

Interior Minister Christophe Castaner said that the French native, born in Strasbourg, had run-ins with police starting at age 10.

Chekatt was mostly convicted in France but also in Switzerland and Germany, for crimes including armed robbery.

He had been flagged for extremism and was on a watch list, but the interior minister said ‘the signs were weak’.

Strasbourg is on the border with Germany, where the suspect was convicted in 2016 of breaking into a dental practice and a pharmacy in two towns.

German lawyer Thomas Röder, who served as Chekatt’s public defender, told Bild that he was a very religious man, but otherwise did not seem radicalised.

He said: ‘The only thing that attracted attention was his very religious attitude. He made a point of never taking alcohol or illegal drugs.

‘It was also important to him that he did not have to eat pork in the prison. My client was actually a very sociable type, often joking.’

Prosecutor Remy Heitz said the man attacked with a handgun and a knife about 8pm local time on Tuesday, and was shot in the arm during an exchange of fire with soldiers during his rampage.

He then took a taxi to another part of the city, boasting of the attack to the driver, and later exchanged more gunfire with police and disappeared, Mr Heitz said.

Witnesses described shots and screams after the gunman opened fire and yelled ‘God is great!’ in Arabic, the prosecutor added. Swaths of the city were under lockdown for hours.

The attack in the heart of old Strasbourg, near its famous cathedral and within the Christmas market that draws many tourists, unsettled the border city that also is home to the European Parliament.

The German government said it had stepped up controls on the border with France but did not change its threat level.

‘All terrorist attacks touch all of France, and it’s plain to see each of the attacks have hit a highly symbolic point or moment,’ Mr Philippe told parliament.

He listed violence since 2015 that killed more than 200: at the Charlie Hebdo satiric newspaper, a Kosher store, restaurants, bars and a concert hall in Paris; along the famed seaside promenade in Nice; and even inside a church in a quiet suburb of the northern city of Rouen, among others. 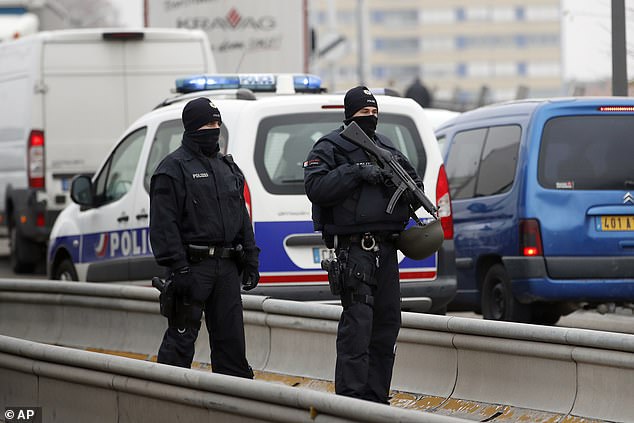 There are fears that Chekatt could have fled across the border to Germany, where he has link and has been arrested at least once 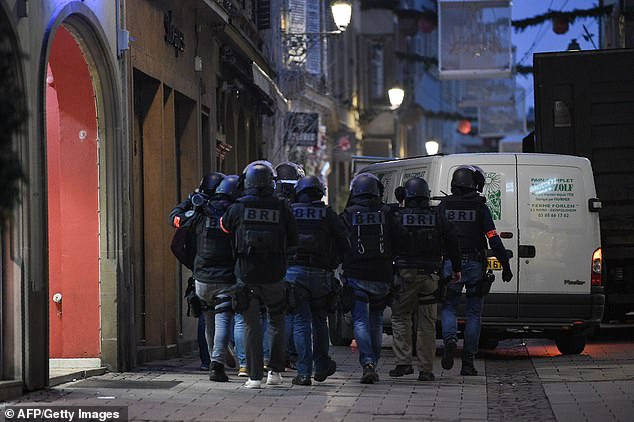 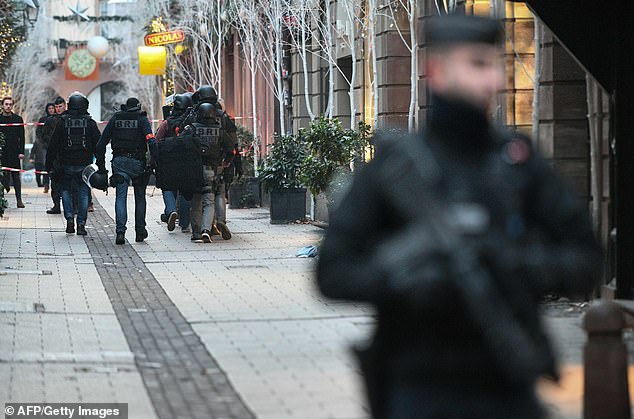 The city was in mourning, with candles lit at the site of the attack, and the Christmas market was closed at least through Thursday, according to regional prefect Jean-Luc Marx.

The attack came as President Emmanuel Macron sought to take back control of the nation after a month of anti-government protests that have spread violence across the country.

It came only 24 hours after he broke a long public silence and appealed for calm amid the mushrooming ‘yellow vest’ protest movement that seeks a better standard of living for ordinary citizens.

He offered a package of measures, but it was not clear if that would halt the weekend protests.

‘The terrorist threat is still at the core of our nation’s life,’ government spokesman Benjamin Griveaux quoted Mr Macron as saying at the weekly Cabinet meeting.

Interior Ministry official Mr Nunez said Chekatt had been radicalised in prison and had been monitored by French intelligence services since his release in late 2015, because of his suspected religious extremism.

Mr Nunez told France-Inter that police went to his apartment in an outer neighbourhood of Strasbourg on Tuesday morning. Authorities said he was not there, although five other people were detained.

Police seized a grenade, a rifle and knives in the operation, Mr Heitz said.

Jewish gravestones in a cemetery near Strasbourg were discovered daubed with antisemitic graffiti hours before an Islamic extremist opened fire at a Christmas market in the French city.

The graves were painted with Nazis swastikas and the numbers 88 and 14, which are used by white supremacists to reference the phrase ‘heil Hitler’ and a 14-word statement he once issued from prison which reads: ‘We must secure the existence of our people and a future for white children.’

Other graffiti read ‘CRIF = ZOG’, referencing the French organisation which represents Jewish communities – CRIF – which was compared to a ‘Zionist occupation government’ or ‘ZOG’. 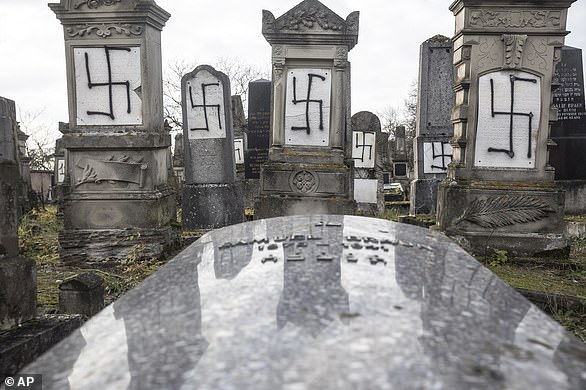 Jewish graves in a cemetery in Herrlisheim, 12 miles north of Strasbourg, were discovered covered in racist graffiti on Tuesday just hours before the city’s Christmas market was attacked by a radical Islamist 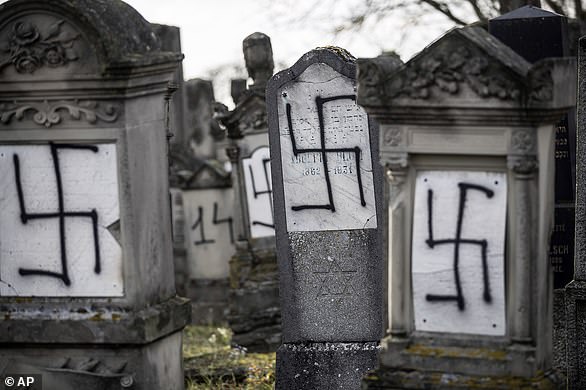 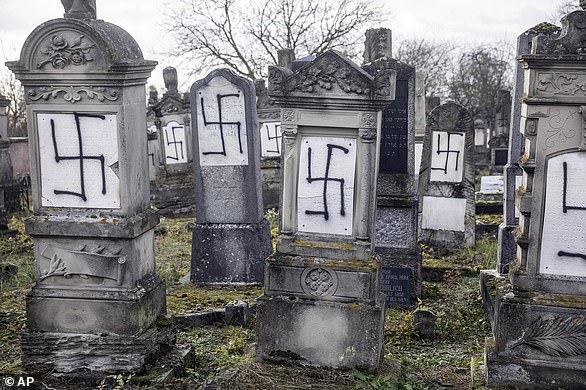 The graves were also painted with a slogan which reads CRIF = ZOG, referencing the organisation that represents French Jews, called CRIF, which was branded a ‘Zionist occupation government’, or ZOG

The graves are located in Herrlisheim, a commune around 12 miles to the north of Strasbourg.

This is the fourth time in two months that graffiti featuring far-right and antisemitic symbols has appeared in the Alsace region, according to the Jerusalem Post.

On the same day the most recent graffiti was discovered, Strasbourg saw one of its main avenues renamed for Simone Veil, a Holocaust survivor and former minister who died last year.

Hours after the vandalism was uncovered, Cherif Chekatt – an Islamic extremist – shot three people dead and wounded another 12 in an attack at Strasbourg’s Christmas market.