Perhaps sensing football fans’ collective boredom during the fourth quarter of the Baltimore Ravens’ 40-0 pounding of the Miami Dolphins on Thursday night, an attention-seeking cat sprinted out onto the field at M&T Bank Stadium.

The cat, which appeared to be a stray, crossed the field towards the Miami sideline, where it was eventually noticed by Dolphins players as team quarterback Matt Moore was throwing an incompletion. It’s not quite clear if the presence of the cat or the Ravens’ pass rush contributed to Moore’s inaccurate pass.

It’s also not known where the cat came from or where it is now. Moments after introducing itself to television audiences, the cat seemed to vanish.

Spokespeople for the Baltimore Ravens did not immediately respond to requests for comment.

The city of Baltimore has long had a problem with stray cats.

‘Perfect form, extension,’ Romo said, evaluating the cat’s technique. ‘I mean, doesn’t get phased if there are people around. Ooh, look at the change in direction.

‘Does he get both feet right here at the end, Jim?’ Romo asked play-by-play announcer Jim Nance. ‘He’s in!’ 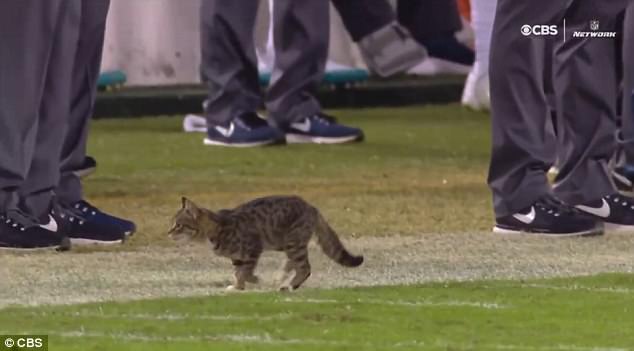 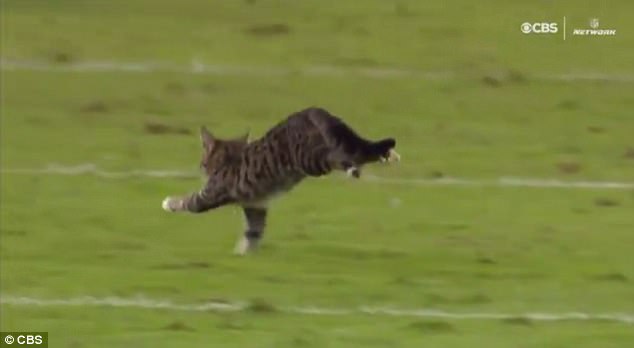 CBS commentator Tony Romo: ”Perfect form, extension. I mean, doesn’t get phased if there are people around. Ooh, look at the change in direction!’

The game was also notable for the significant head injury sustained by Ravens quarterback Kiko Alonso.

According to Community Cats Maryland, Baltimore has over 185,000 strays, or one for ever 3.4 citizens.

After throwing for 101 yards and a touchdown, Flacco was hit high by Alonso while sliding at the end of an impromptu run near the end of the second quarter. Flacco’s helmet flew off his head, and the 10-year quarterback appeared wobbly as he struggled to his feet.

Flacco was initially placed in concussion protocol, and by halftime was ruled out.

‘Joe had a concussion and a cut ear,’ coach John Harbaugh said. ‘They were stitching it up without any anesthesia, so he’s a tough dude. That’s as much as I know.’

The coach hopes Flacco is ready to play on Nov. 5, when Baltimore faces Tennessee on the road.

Things got heated between the two teams after the hit as both Dolphins and Ravens players found themselves in a few shoving matches over the rest of the game. 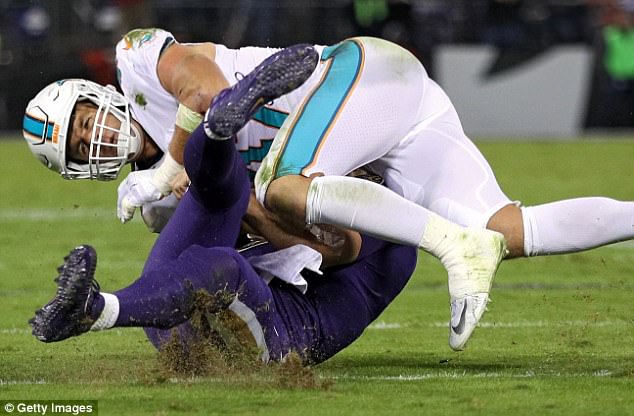 While attempting to slide, Joe Flacco has has helmet knocked off by a hit from Kiko Alonso 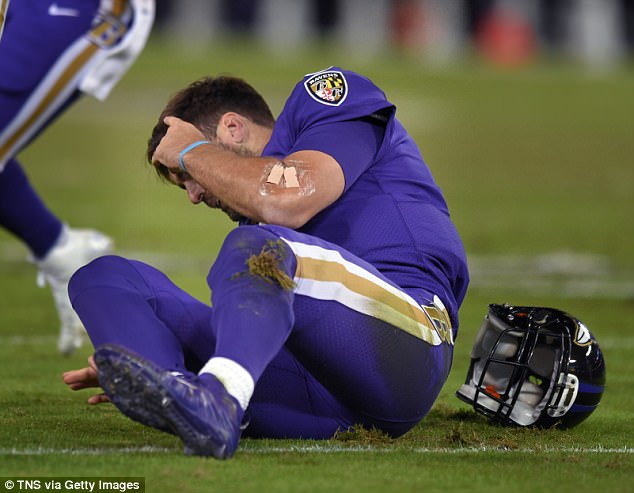