Seven school kids were scratched and bitten by a stray pit bull puppy that got loose and ran amok at their South Carolina school.

The incident took place on Monday just around 1.30pm at Lansdowne Elementary School in Charlotte, according to reports.

All of the victims – who suffered bite marks and scratches – had minor injuries but an ambulance was not called to the scene.

While the students – the school serves kindergarten through fifth grade – were outside, the dog came into the playground area.

Staff quickly attempted to escort the children into the school, but the dog – named Bro – managed to get inside and ‘chaos’ erupted.

‘Some of the children were frightened and were reacting by running and making noise,’ Animal Care and Control said in a statement, according to the Charlotte Observer.

‘The canine then became overstimulated by this reaction and began to jump on and bite some of the children. A teacher was able to confine the canine.’

The dog has been labeled as ‘hyperactive’ rather than aggressive, according to Melissa Knicely with Animal Care and Control.

‘I believe if that was the case, the level of the bites would probably be more severe than what they are,’ Knicely added. ‘It was probably one of those things where it was playing, it was jumping up…and it started biting at the legs and things like that.’

Most of the injuries sustained occurred on the children’s lower legs and thighs, according to local authorities.

One child was scratched on the abdomen, however.

School personnel contacted the owner of the dog by phone, using information that they obtained from the dog’s collar tag. 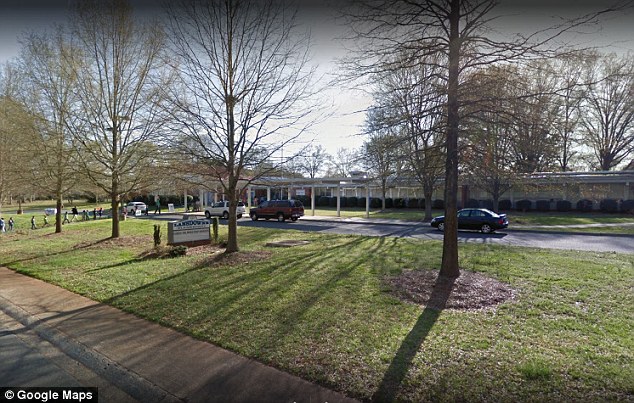 Before Animal Care and Control could arrive on the scene, the dog’s owner came and took the animal.

Since then, the owner has been contacted and confirmed that his dog’s vaccinations are current.

At just 10 months old, the silver and white male bit dog was described as being medium-sized.

His owner had been visiting from Cumberland County, with the dog escaping just a few hours prior.

Bro’s rabies shots were proven current, according to local officials.

While it is believed that it won’t be euthanized, law

At just 10 months old, the silver and white male bit dog was described as being medium-sized.