A man branded by a businessman as a ‘fake homeless’ professional beggar has hit back and said he really is destitute and nearly died while sleeping rough last year.

Ben Fone said he used to curl up in the doorway of Debenhams overlooking Torquay Harbour in Devon before being found sheltered accommodation last Friday by the council.

The 29-year-old has been diagnosed with Schizophrenia but uses heroin to try and escape from the condition.

Last July Ben was rushed to hospital after developing a blood clot on his right leg as a result of continually injecting the drug and spent three months recovering.

He and scores of others have been named and shamed as part of a campaign called Fake Homeless which aims to drive out professional beggars, those who do not live on the street, from Torquay.

Local businessman Ashley Sims has compiled a list of alleged offenders and has uploaded photographs onto Facebook showing them begging in the seaside town.

However, Ben said: ‘I have a roof over my head now but it wasn’t like that for a long time.

‘I’ve slept rough all over Torquay and until recently I was bedding down at night in the doorway of Debenhams, even during some of the cold weather last week. 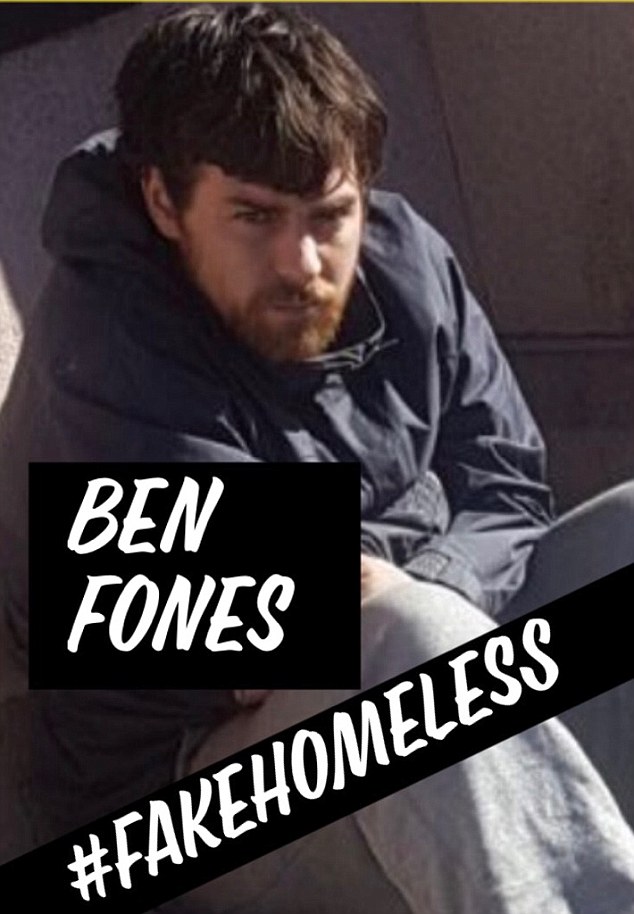 Ben, 29, who has slept rough in the Devon seaside town, had his photo taken by Ashley Sims, who then branded his picture with the word #fakehomeless 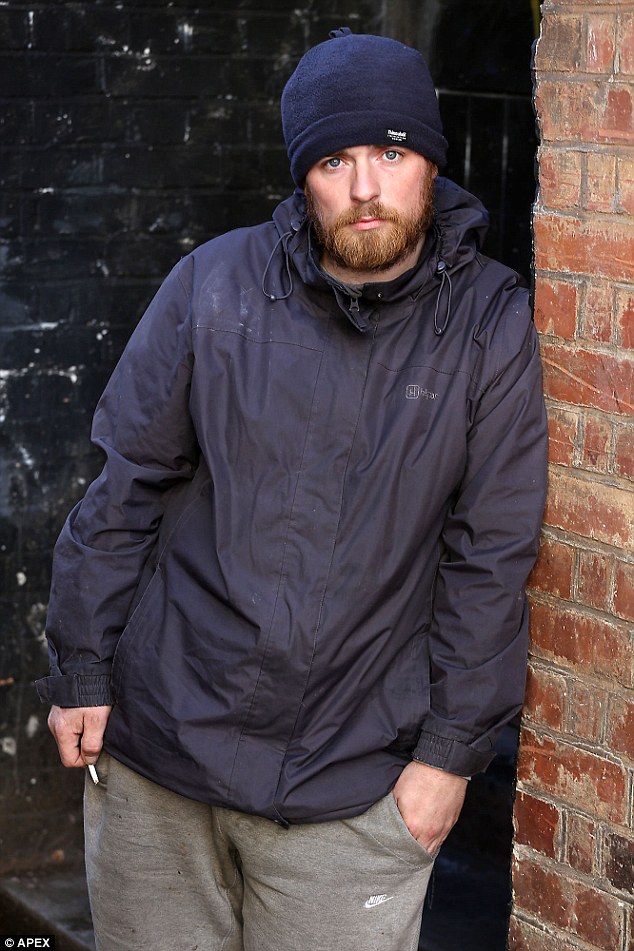 ‘I was given sheltered accommodation by the council on Friday and I’m trying to turn my life around.

‘I’m not begging anymore and I’ve been 14-months sober. The wake-up call was when I nearly died last July after developing a blood clot in my right leg from injecting heroin.

‘I spent three months in Torbay Hospital recovering. I don’t want to go through that again. 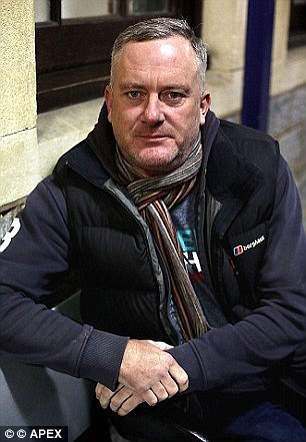 ‘I’ve been homeless since I was 17. I was married at 19 but the relationship crumbled and I lost my job as a mechanic. I used to stay round friends’ homes in Brixham and Paignton but after about five years started sleeping rough.

‘I used to go out and commit crime, rob and steal, just to get caught and sent to prison so I could get somewhere to sleep and food every day. They also give me help for my mental health problems.

‘I’ve stayed clear of prison for two and a half years. I’m trying to get better but it doesn’t help when I get a camera pointed at me and am then labelled as ‘Fake Homeless’

Ben is from a family of seven children of which he was the only boy.

He was placed with a foster family when he was seven-years-old because his parents could no longer control his unruly behaviour, exacerbated by his mental health problems.

His sister Kerry Lake, 27, said: ‘The council found him a place last year through a bond scheme, where they agreed to cover his rent, but they withdrew it and he was back out on the street.

‘I last saw him last Sunday shivering in a doorway by Debenhams. His ankles were swollen and he was having trouble being able to walk. That’s because he injects heroin.

‘The reason he takes it is because he was diagnosed with schizophrenia when he was 20 and he hears voices in his head. He takes medication for it but the only way he feels he can really cope is with heroin.

‘Occasionally he’ll see me in town and he’ll beg me for money but I never give it to him because I know what he’ll spend the money on. I go and buy him food and drink instead. 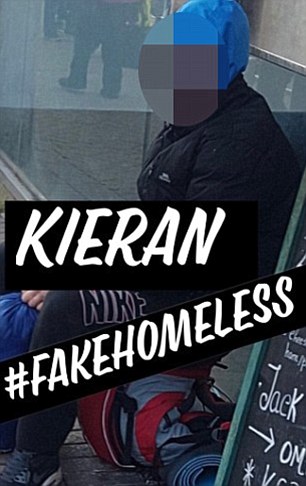 Mr Sims claims professional beggars like ‘Titch’, pictured above, see it as a ‘turf war’ in which those genuinely in need are pushed out of city centres because they are seen as competition

‘If I gave him cash and he went out and bought drugs, overdosed and died, that would be on my conscience and I don’t think I could forgive myself.

‘He needs proper mental health care because every time he gets a place something goes wrong and he winds back up on the street. He needs proper care and not named and shamed as part of a social media campaign.’

Darrell Lewis, 45, a friend of Ben’s, is also on the Fake Homeless list but says he genuinely sleeps rough.

He said: ‘Sometimes you can make enough money to go into the shelter but a lot of the time you have to find somewhere in the street, a car park or wherever. I usually sleep at the back of Argos.

‘It’s horrible, people can walk past and spit at you or throw food waste at you like you’re nothing.

‘We wouldn’t lead this way of life if we didn’t have to.’

Another accused of being a bogus beggar is 40-year-old ‘Boothey’, who is listed as ‘Alan’. 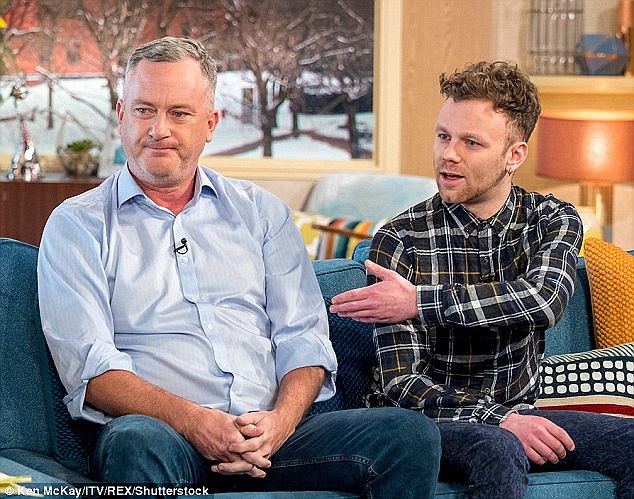 MailOnline tracked him down outside a homeless shelter called The Leonard Stocks Centre, which costs residents £15 a week to stay there.

He said: ‘I’ve been homeless for two years and have slept rough in Torquay for the last five months. I don’t know why I’ve been targeted by this campaign.

‘It has caused me nothing but aggro and I’m sick of it.’

Rachel Shephard, who runs a drop-in centre in nearby Paignton called The Haven, used to be a weekend volunteer at The Leonard Stocks Centre.

She said: ‘I’ve seen this Fake Homeless campaign and the only thing I’ll say about it is that none of those it apparently exposes are in secure tenancies.

‘They are in homeless hostels, they are sofa surfing at a friend’s flat, they are in drug and alcohol rehabilitation centres, you can’t lump it all under one blanket label. 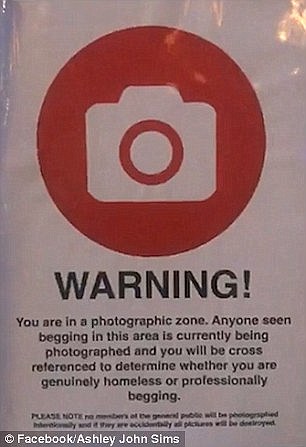 ‘It’s not black and white, it’s far more complex. There are issues with addiction and mental health, these people are vulnerable even if they are not physically sleeping on the streets.

‘Torquay has inner city problems but with none of the infrastructure to deal with it.’

‘Robbo’ is one of those who bed down in the street every night with his border collie Jet.

He said: ‘It does irritate me because some of them stay indoors in the warm and come out when it suits them to beg when they need money for drugs or whatever.

‘What they are doing is taking food out of my mouth and my dog’s mouth. I’m out here trying to survive and more often than not people leave me food or drink rather than cash. I’m grateful for any act of generosity ‘

But he has been staying with a customer and friend since the crippling cold weather blasted in last week. He hopes to buy a camper van from his earnings in the next few weeks.

He said: ‘A few people have told me they’ve seen beggars leave their flat with a sleeping bag slung over their shoulder to make it look as though they’ve been sleeping rough.

‘It’s a difficult one though because these people have real problems with addiction and mental health. They may not be out on the street but they don’t really have homes either. Ben told MailOnline: ‘I’ve slept rough all over Torquay and until recently I was bedding down at night in the doorway of Debenhams, even during some of the cold weather last week’

‘There is a 22-year-old girl I know who stays in the homeless hostel and she recently got given a new home by the council but turned it down.

‘When I asked her why she said that she knew she wasn’t going to be able to keep up with the rent, or pay the bills or look after the place.

‘And that’s the problem. Without carers looking after them and managing them, some of these people just cannot cope.’

Mr Churchill, a father of two originally from Bournemouth in Dorset, lost his job as a welder and then his home.

He said: ‘I didn’t want to go on the dole or beg or go into a homeless hostel so I decided to live on the street and sell the Big Issue.

‘I’ve been doing it since last October and now I’ve saved just over £4000 which is almost enough for me to buy a camper van. But Mr Sims’ campaign has been blasted by police in Torquay and local councillors, with one homeless charity boss calling ‘This persecuting of vulnerable adults on our streets ‘a disgrace’

‘The generosity of the people of Torquay has bowled me over.’

Mr Sims, 46, said his Fake Homeless campaign was aimed at stopping those who needed help from resorting to begging.

He added: ‘Some of those I’ve pictured begging for money need proper care, not left somewhere unchecked where their problems get worse.

‘They shouldn’t be out on the street but they are victims of today’s society which isn’t helping the most vulnerable when they need it.

‘That said there are those who exploit the system. One beggar I saw in Torquay was dressed in an army camouflage jacket and when I joked to him that the idea was for people to see him he said ‘nah mate, people give more if they think you’re ex-military. It’s better than having a dog’

‘I don’t think that’s right. There are genuine members of the armed forces who are sleeping rough in Britain who should be top of the tree when it comes to the housing.

‘If you fight for your country in a warzone, you shouldn’t be forgotten about on a cold street corner.’