Stress-free Seattle: Uncover the charms of a coffee city

Seattle may not have the iconic sights of New York or the glitz of Los Angeles, but nor does it have the frenetic pace and brashness.

Known as the U.S.’s tech capital (Microsoft and Amazon are based here), it also has the terrific backdrop of the Mount Rainier National Park, home to the famous 4,392m-tall snow-capped peak.

And now that Virgin Atlantic has launched daily direct flights, there’s never been a better time to explore.

A towering attraction: Seattle has an iconic skyline – with the Space Needle to the fore

Seattle is nicknamed the Emerald City on account of its 6,000 acres of parkland and there’s a welcoming, easy-going vibe that’s hard to resist.

The sunny days of summer are fast approaching and with them the lively Seattle International Dance Festival (seattleidf.org) next month, followed by July’s tasty Seattle Street Food Festival (seattlestfoodfest.com).

Make a beeline for MoPop, officially known as the Museum of Pop Culture (mopop.org), a striking space dedicated to music and movies, with interactive exhibits covering everything from Jimi Hendrix to Star Trek.

Next door is the whimsical Chihuly Garden and Glass museum (chihulygardenand­ glass.com), ­filled with designs that wouldn’t look out of place at the Mad Hatter’s tea party. 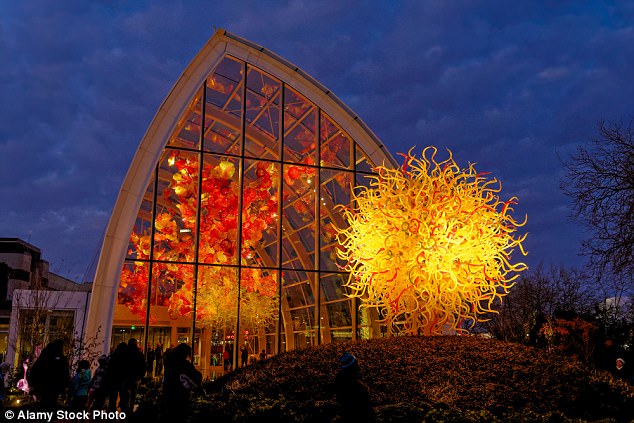 Bright lights, big city: The Chihuly Garden and Glass museum is one of Seattle’s key sights

Chances are you’ll have arrived in Seattle aboard one of Virgin Atlantic’s new 787 Dreamliners, built just down the road at Boeing’s HQ in Everett.

Go behind the scenes and see how they are put together at the Future Of Flight Aviation Centre (boeing.com).

Tours of the world’s largest building – the doors are each the size of a football pitch – reveal how these metallic birds go from the factory floor to the skies. You’ll never look at a 747 in quite the same way.

Across Elliot Bay and a 35-minute ferry ride from Downtown is quiet and quaint Bainbridge Island. This tiny community, with its pretty white picket houses and harbour filled with fishing boats, is an idyllic escape from the city bustle.

Stroll along Winslow Way to enjoy the family-run cafes, boutique galleries and independent shops. The ferry ride back towards the skyscrapers of Seattle is another highlight.

Arguably, the best view of the city is from the top of the Space Needle (spaceneedle.com). This futuristic tower dominates the skyline and has become the symbol of the city. Built in 1962, its design was based on a bagel on a stick. 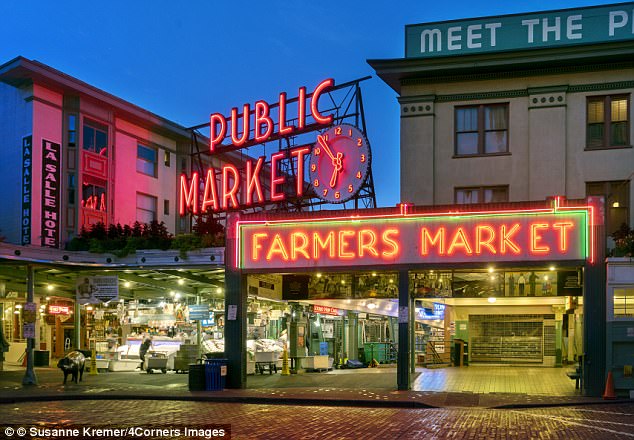 Food for thought: Pike Place Market is one of the culinary hubs – and has the first Starbucks

King of the hill

Seattle’s hippest neighbourhood is Capitol Hill, known to locals simply as ‘The Hill’ and famed for its laidback vibe, cosy cafes and bohemian bars. Prop up the dive bar at Montana (montanainseattle.com), a drinking den big on character.

For something more sophisticated, order a craft cocktail at Sun Liquor (sunliquor.com). The Rebuttal, a mix of cachaca, sherry, banana liqueur and bitters, is recommended.

For a hearty brunch the following morning, head to The Wandering Goose (the­ wanderinggoose.com). Try the Hangtown Fry – fried oysters, poached eggs and pork belly.

One of the most famous addresses in Seattle is the Pike Place Market, the longest continuously running farmers’ market in the U.S. It now covers six floors offering some of the city’s best food.

Chains are not permitted unless they originated in the market – which Starbucks did. Crowds gather outside the branch for a caffeine fix.

But Pike Place is much more than Starbucks. Take a tour with Savor Seattle (savorseattle­tours.com) for two hours of local insight and culinary treats.