Stricter drinking and driving policies could save 800 lives a year in the US, study reveals

Tougher legal restrictions on drinking and driving effectively reduce the number of fatal car crashes in the US, a first-of-its-kind report reveals.

In 2016, more than 2,000 Americans died in car crashes that involved alcohol, accounting for about a third of all fatal accidents.

To try to limit the number of such tragic events, the US has long had limits in place on how much alcohol a person can have in their blood while driving as well as speed limits, but little research has been done to quantify their benefits for public health.

Drunk driving accidents kill 10,000 people a year in the US, but by making policies against the dangerous practice just 10 percent stricter, we could save 800 lives a year, a study suggests

The US is one of the worst high income countries in the world for drunk driving.

With alcohol involved in 32 percent of fatal car crashes in the nation, only Uruguay, Canada and New Zealand have higher rates of deadly drunk driving accidents.

Limits on blood alcohol content (BAC) exist to try to curb the rates of these accidents, in the US and elsewhere.

The current legal BAC is 0.08, a number only recently established in 2004 when all 50 had finally lowered their levels from 0.10 BAC, thanks in part to the campaigning of the Mothers Against Drunk Driving advocacy group.

Even at our lower BAC limit, drivers can still be drunker in the US than in many industrialized nations, where the limit is 0.05, according to lead study author Dr Tim Naimi.

‘Most developed countries in the world and about two-thirds of the people living in the developed world are in places where the legal limit is 0.05 or even a little lower,’ he says.

In recent years, both the National Academy of Sciences and the National Transportation Safety Board have called for the BAC limit in the US to be lowered to 0.05, and Utah has passed such a law, set to come into effect next year.

But really, studies have shown that once people’s blood alcohol levels – a function of how much they drink of what, for their body weight over what period – surpass 0.03, crashes start happening.

Because alcohol is a depressant substance, any amount of it slows down your motor and information-processing skills, leading to poor judgement and delayed reactions – a dangerous combination behind the wheel.

He and his team looked at how 29 alcohol- and driving-related affected fatal drunk driving crash rates across the US between 2000 and 2015.

Though plenty of research has examined individual policies, the Boston Medical Center study is the first to look at ‘how effectively these mix and how well implemented they are,’ Dr Naimi says.

‘We included policies that were just designed to make it so people were less likely to drink excessively and policies to deter people from driving after one is impaired.

‘Not only do the policies as a whole protect against alcohol-related crash deaths, each of those groups generally – general drinking and impaired driving laws – both contributed on their own to that protection, which argues in favor of more comprehensive policy approaches.’ 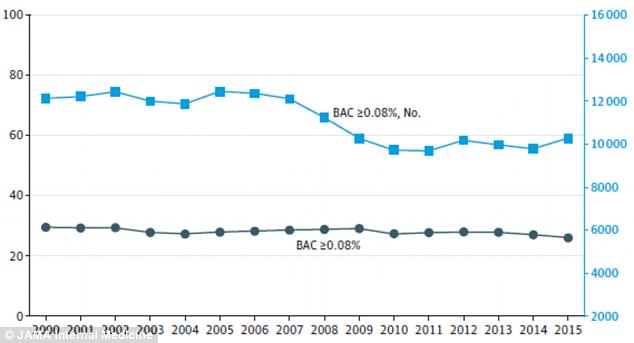 Rates of fatal drunk driving accidents have remained fairly stable in the last 15 years, but there has actually been a slight uptick in the deadly wrecks in the last three years

There was a one-to-one relationship between the tightening of this web of restrictions and the number of alcohol-related crash deaths.

‘These policies exert a strong protective effect: for every one percent you increase the strength of your policy you get a one percent increase in the alcohol-related crash death rate,’ says Dr Naimi.

So if the US made all of its policies 10 percent stricter, 800 fewer people would die in alcohol-related car wrecks.

Some of the ways states could accomplish this would be to raise alcohol taxes, increase the number of highway sobriety check points, require ignition locks for people convicted of driving under the influence for the first time, and lower the BAC itself, Dr Naimi suggests.

‘The proportion of crash deaths that are alcohol-related has stayed stable, but the numbers of come down somewhat,’ says Dr Naimi.

After 2000, the these rates started to taper off slowly, but he says that in the last three years, drunk driving deaths have started to climb again, ‘which is very unfortunate.’

‘Really, our focus is to look at the overall relationship of alcohol laws and policies. If they are stronger, we have a substantially lower likelihood of deaths from alcohol-related motor vehicle crashes.’