Strictly Come Dancing: James Cracknell ‘had to be calmed down’ after being voted off the show

James Cracknell had to be calmed down back stage after hearing he was the first contestant to be voted off Strictly Come Dancing, a source has claimed.

The rower, 47, and his pro partner Luba Mushtuk, 29, were voted off by all four of the show’s judges – Bruno Tonioli, Motsi Mabuse, Craig Revel Horwood and head judge, Shirley Ballas – on Sunday night’s results show.

However an insider has said that James was ‘livid’ at the decision and ranted that ‘it was a massive mistake’ to take part in the competition, reports the Sun.

First to go: James Cracknell, pictured with dancer Luba Mushtuk, is said to have become angry and had to be calmed down after hearing he was the first to leave Strictly Come Dancing 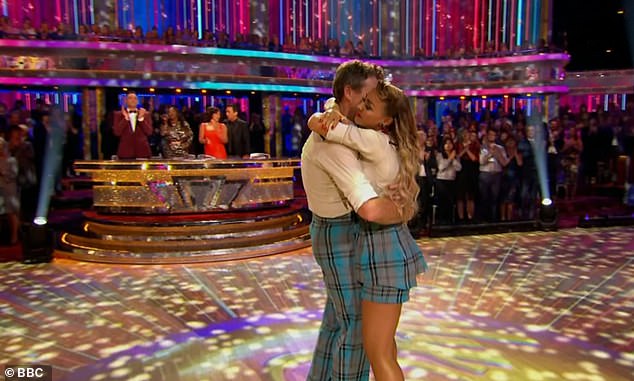 Partners: The rower allegedly thought it was a ‘mistake’ to take part in the competition, and claimed it ‘made him look stupid’

A source said: ‘He was saying things like, ‘It was a massive mistake to do Strictly. I’ve been made to look completely stupid.’

James has since denied the claims on Twitter and Instagram, writing; ‘I don’t reply to people’s comments but I’m not gonna let this one go. @LubaMushtuk & I had fun & our best dance but it wasn’t enough.

‘I know I’m no John Travolta so to throw my toys out the pram would be stupid.’

They claimed that athlete James was competitive and the vote was ‘like his first career failure. He was very angry backstage and had to be calmed down.’

The judges’ scores this week were added to those from last week’s first live episode, after which no celebrity faced the axe.

They were then combined with the results of the viewers’ votes to decide the lowest scoring two couples facing the dance off. 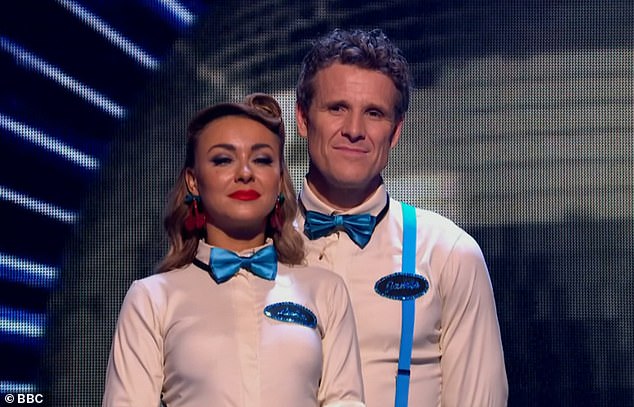 Result: James and Luba achieved the lowest ever score in Strictly history for their jive dance, and were in the bottom two in the public vote before being eliminated by the judges

But the result came after their fate was leaked on Twitter. An unofficial account broke the news before the show, which is pre-recorded following the live show every Saturday evening.

On hearing his fate, James is also said to have been angry as he thought American singer Michelle Visage would be the first to be kicked off the show.

A source told the Sun James felt Michelle, 51, was getting more screen time in comparison to him. 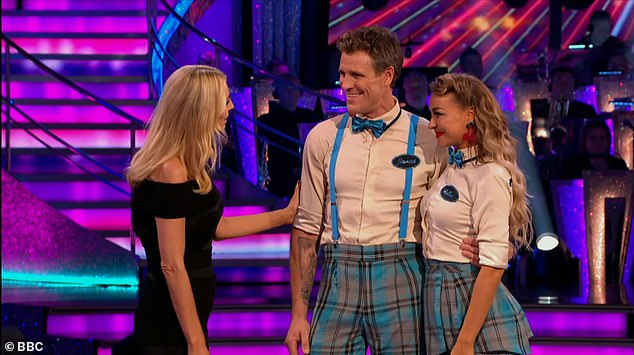 Embattled: Following his elimination, James went onto admit that due to his 2010 brain injury, he struggled to even remember all of the steps the steps

Following his elimination, James went onto admit that due to his 2010 brain injury, he struggled to even remember the steps.

He also addressed fans suggestion that he should have smiled more, telling The Mirror: ‘I go into myself to try and get better, so I’m not smiling a lot.

‘It’s probably been a struggle for Luba, her having to say ‘do the steps and they will come’, rather than having to make sure it’s perfect.’

It also wasn’t a great start for footballer David James and his partner Nadiya Bychkova either, who joined James and Luba in the bottom two.

Both sportsmen and their pros therefore faced the dreaded dance off, with James and Luba performing their jive to Tutti Fruitti by Little Richard, and David and Nadiya performing their Paso Doble to Spanish Gypsy by Espana Cani .

After both couples had danced a second time the judges delivered their verdicts. 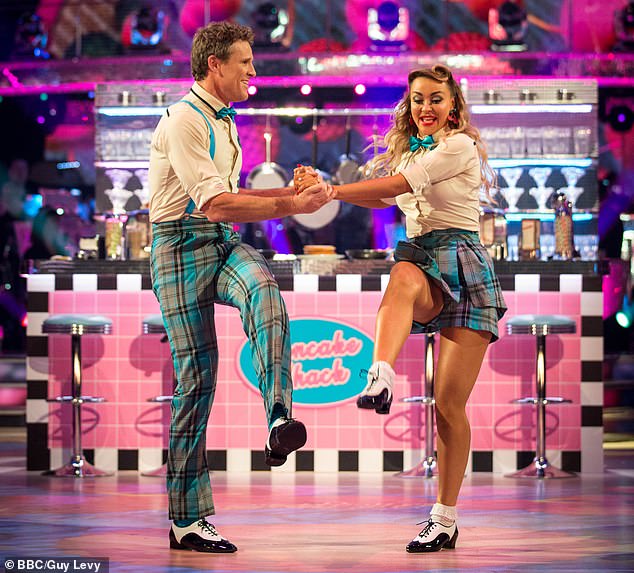 Upsetting: He previously admitted that he had to undergo rigorous psychological testing before the BBC would allow him to take part in the show

Craig Revel Horwood chose to save David and Nadiya. Craig said: ‘Well for me in that dance off one couple improved beyond compare and that couple is the couple I would like to save, David and Nadiya.’

Bruno Tonioli agreed: ‘I have to save the couple that really showed to me how you apply and you work on the comments of the judges and deliver a performance that is almost night and day from one day to the other. David and Nadiya.’ 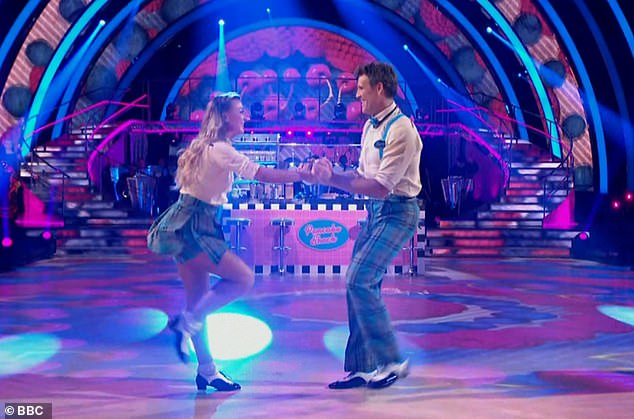 Getting better: It was thought that bosses were worried about the lasting effects of an accident in which the Olympic gold medallist almost died nine years ago

As it was already three out of four, Shirley’s vote did not matter, but she said she would also have chosen to save David and Nadiya.

Despite his alleged anger at the result, when asked by Tess about his time on the show, James said: ‘Definitely enjoyed the last three days of the last week as I got to grips with the steps and started to enjoy it.

‘I’m enjoying it anyway, the luxury of being with someone so good and learning off them. I’m a way better dancer than I was two weeks ago.

‘Luba’s been amazing with being so patient with a couple of left feet.’

Luba was asked if she had any words for James and said: ‘I would like to say a huge thank you with all my heart to make this journey so amazing. You inspired me every day and I hope you inspire many more other people to start dancing.’

On Sunday James also revealed to the Mail On Sunday he had to go through rigorous psychological tests before the BBC agreed he was well enough to take part.

He told the newspaper: ‘I had to have more tests because of my injury. They wanted to make sure that I was OK to go on.

‘They had to check I was well enough and able to cope with the hours that are required to take part, and also that I would be mentally strong enough to deal with the judges who, let’s face it, would have no choice but to judge me fairly and that might not always be nice.

‘I know I was tested more psychologically than some others, which I am grateful to Strictly for.’

It was thought that bosses were worried about the lasting effects of an accident in which the Olympic gold medallist almost died nine years ago.

The rowing champion, who split from his wife Bev Turner last year and is now dating American financier Jordan Connell, developed epilepsy in 2010 after he was hit by a lorry while cycling across America. 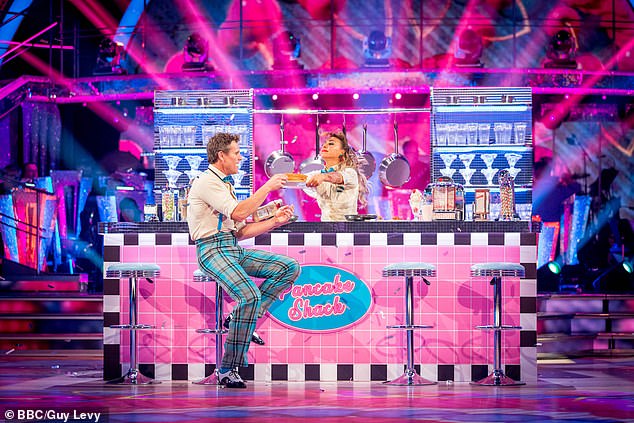 Truth: James and Luba will be joining Zoe Ball for their first exclusive televised interview live on Strictly Come Dancing: It Takes Two on Monday

Sunday’s Results show also featured a flamenco-inspired routine set on the rooftops of Barcelona from the pros, plus a musical performance from chart-topping singer and songwriter Lewis Capaldi who performed his number one hit single, Someone You Loved.

James and Luba will be joining Zoe Ball for their first exclusive televised interview live on Strictly Come Dancing: It Takes Two on Monday.

The remaining fourteen couples will take to the dance floor next week in a spectacular Movie Special.