But this weekend, Bros star Matt, 54, became the third contestant to after facing actress Kym Marsh in the dreaded dance off.

All over: Matt Goss is the third celebrity to depart the dance floor in Strictly Come Dancing 2022

Both couples performed their routines again, with Kym and her dance partner Graziano Di Prima performing their Samba to Volare by Gipsy Kings.

Then Matt and his dance partner Nadiya Bychkova performed their Jive to All Shook Up in a bid to impress the judges and remain in the competition.

Matt and Nadiya got 20 points on Saturday’s live show – leaving them in last place on the leaderboard – while Kym and Graziano’s Samba bagged them 32 points – putting them in fifth place. 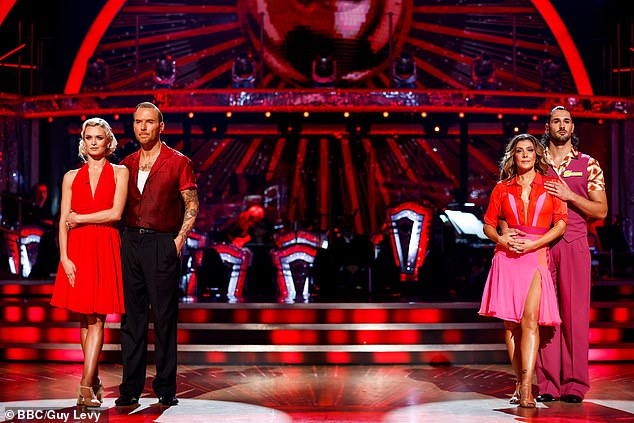 Close call: Matt became the third contestant to after facing actress Kym Marsh in the dreaded dance off 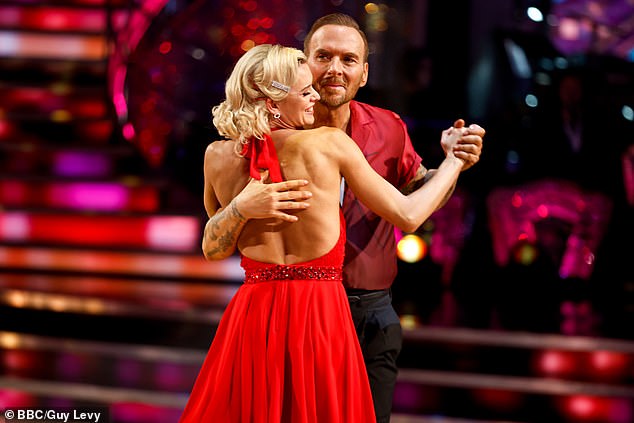 One more time: The former Bros star and his dance partner Nadiya Bychkova performed their Jive to All Shook Up in a bid to impress the judges and remain in the competition

After both couples had danced a second time, the judges delivered their verdicts, with Craig, Motsi and Anton all voting to save Kym and Graziano.

Craig said: ‘I think both couples went up a major notch, I mean Matt you went fantastically mad in that, I loved it, and Kym you were really great in that. But the couple I would like to save is Kym and Graziano.’

Motsi added: ‘From that dance off only, I have decided to save Kym and Graziano.’

Anton said: ‘I would just like to say you should both be thrilled with the way you performed in the dance off, it’s the most high pressured of situations.

‘Matt – that’s your best performance of the whole series, you should be really proud of yourself. But the couple with the higher technical ability, I think for me, going through is Kym and Graziano.’ 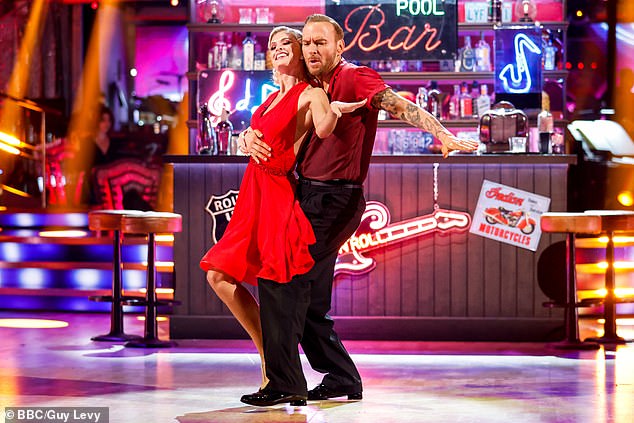 Nightmare: Matt and Nadiya got 20 points on Saturday’s live show – leaving them in last place on the leaderboard 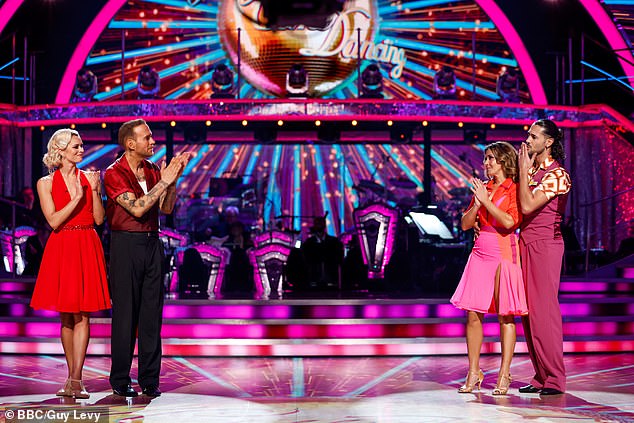 Unanimous: After both couples had danced a second time, the judges delivered their verdicts, with Craig, Motsi and Anton all voting to save Kym and Graziano 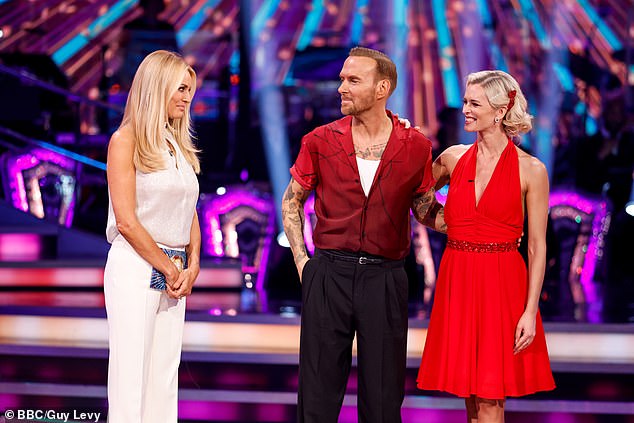 One-off: Matt described his time on the show as an ‘extraordinary experience’ while talking to Strictly co-host Tess Daly

With three votes to Kym and Graziano, it meant they had won the majority vote and would be staying in the competition regardless, however Head Judge Shirley Ballas also said she would have decided to save Kym and Graziano.

Shirley said: ‘I also felt that both couples were 100% committed, spot on performances today. But the couple with a little bit more technical skill was Kym and Graziano and that’s who I’d save.’

When asked by Tess Daly about his time on the show, Matt said: ‘It’s an extraordinary experience, I have been in America for 25 years.

‘Thank you judges for your candour, you’ve helped me in many ways, my posture – Anton, I am more aware of it.

‘This lovely lady beside me, a world champion with all the patience. I am very honoured to have danced with you, and everyone who is still in, I love you guys, go smash it guys.’ 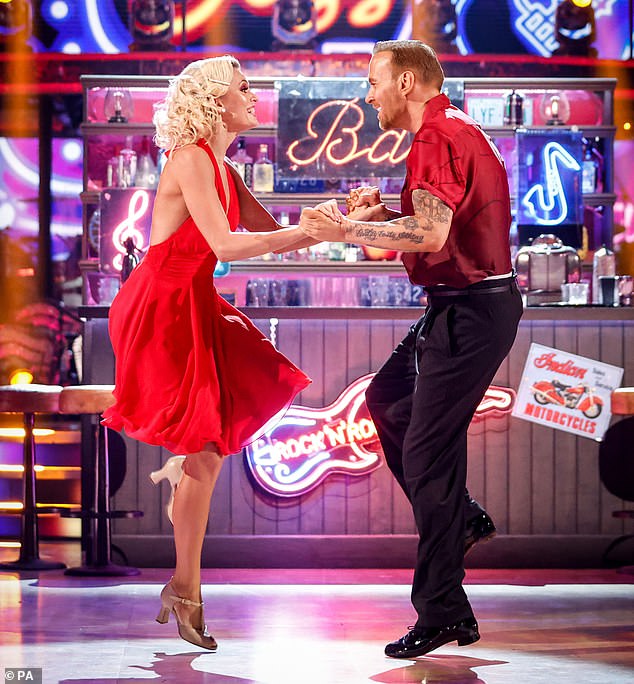 Happy: They both seemed to be in their element during the performance on Saturday evening

Nadiya was then asked if she had any words for her partner, she said: ‘First I’m so grateful that I got to teach and dance with a music icon.

‘But, more important than this, I got the privilege to get to know Matt, for who you really are. Not many people know you and you’re a beautiful soul, very kind human and a real gentleman.’

Saturday’s live show saw the celebrities once again giving it their all with new routines in week four.

Hamza Yassin and Jowita Przystał danced a Salsa to Ecuador by Sash and received a standing ovation from the audience. The judges awarded them the highest score of the series, a near-perfect 39. 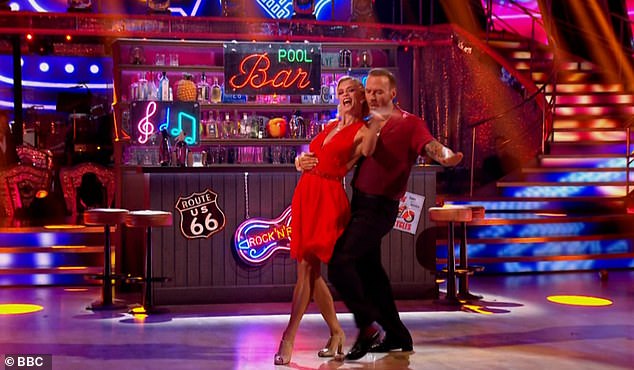 Entertaining: Matt Goss and Nadiya Bychkova Jived their way to 20 points, with Shirley Ballas saying: ‘There is no disputing you are 100% committed to this competition for sure. I can see you have it in your eyes and want to improve’

Motsi said: ‘You have so much rhythm. You shut the house down!’ while Shirley added: ‘You are so humble in receiving your comments, whether they’re good or bad. You are Daddy Cool now. It was perfecto.’

Jayde Adams burst into tears after she and Karen Hauer danced the American Smooth to Wind Beneath My Wings to Bette Midler, with the comedian opening up about how it reminds her of her late sister Jenna, who passed away in 2011 from an inoperable brain tumour. They were awarded 31 points.

In Jayde’s VT, she said: ‘The lyrics really resonate… she was two years older than me and she died 11 years ago. I didn’t just lose a sister, I lost a best friend, a dance partner. This song in particular is very special to me and my family and I hope I can do it justice this week.’ 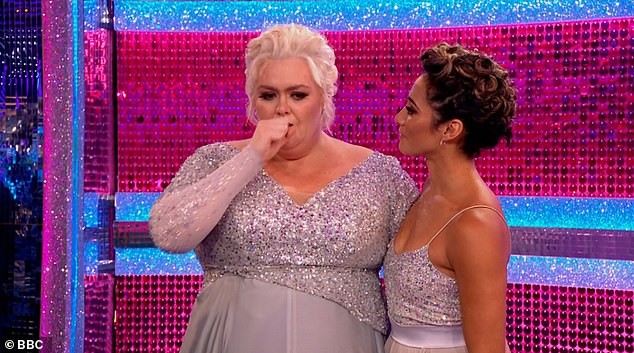 Strictly Come Dancing 2022: Jayde Adams burst into tears as she dedicated the American Smooth to her late sister Jenna and topped the leaderboard during Saturday’s show – with a teary-eyed Shirley Ballas calling the comedian ‘her hero’

Following the routine, a teary-eyed Shirley Ballas said: ‘I feel like you’re my hero. You’ve represented this number with everybody who’s lost a loved one. I’m really emotional. I’m sure your sister would be proud of you.’

Speaking to Claudia Winkleman afterwards, Jayde burst into hysterical tears, saying: ‘Something she said to my mum before she died, “Do you think people will forget me?” You just said her name on this and… ‘I’m so lucky that I get to do this because so many people lose people and grief is so difficult.

To be able to keep the promise that we wouldn’t let people forget her is the greatest gift.’ Elsewhere, Will Mellor – who had been struck down with an illness during the week – and Nancy Xu danced the Rumba to The Joker And The Queen by Ed Sheeran and Taylor Swift – which gained them a score of 23. 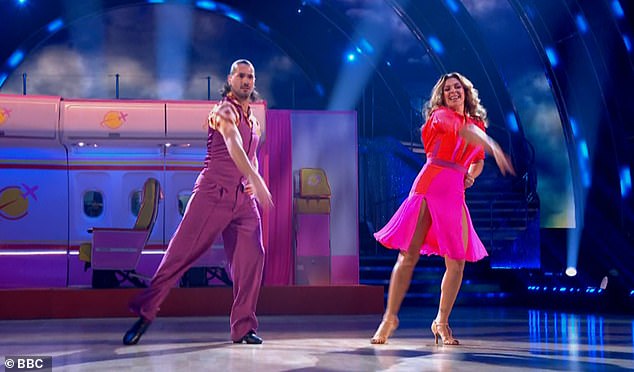 Talented: Next up was Kym Marsh and Graziano Di Prima, who danced the Samba to 32 points

In his VT, the EastEnders star had said: ‘Monday, I came into training and after a couple of hours, I felt funny. I’ve come down with a terrible virus.’

Sunday’s Result Show opener featured a passionate and dramatic number from the professionals to Lana Del Ray’s Young and Beautiful.

There was also a special music performance from George Ezra who performed his single ‘Dance All Over Me’.

The remaining twelve couples will take to the dancefloor next when Strictly Come Dancing returns on Saturday 22 October at 6.40pm for its BBC 100 Special, with the results show on Sunday 23 October at 6:45pm on BBC One. 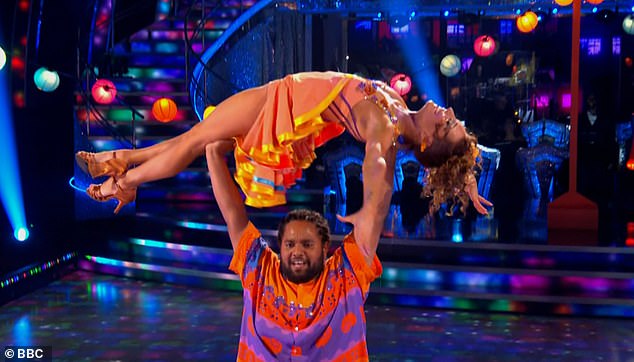 Sensational: Hamza Yassin and Jowita Przystał danced a Salsa to Ecuador by Sash and received a standing ovation from the audience. The judges awarded them the highest score of the series, a near perfect 39