Saffron Barker was the latest celebrity to leave Strictly Come Dancing after the judges chose to send Karim Zeroual through to next week’s show.

The YouTuber, 19, failed to impress during Saturday’s performance – despite putting in 12-hour rehearsal sessions with her dance partner AJ Pritchard.

The pair were praised by head judge Shirley Ballas for their ‘nice, bright’ Samba to Walking On Sunshine by Take Me To Rio Collective, but it wasn’t enough to stop them being sent into the bottom two for a second week running.

Meanwhile Karim’s Contemporary Couples Choice to the tune of Drops Of Jupiter by With Confidence wasn’t delivered with enough emotion, according to Craig Revel Horwood.

He said: ‘I thought it was engaging, I thought it had great leaps great turns but I have to say I think at the moment you’re a technician, not an actor and that bothers me.

‘It could have been a lot more, I think it is lacking emotional content. I want you to fly I am desperate to get a ten out for you, but I battling with the fact that your technique is overpowering what you’re trying to say.’ 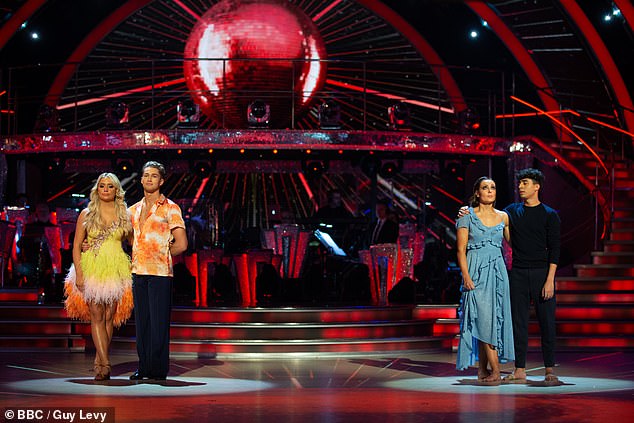 Karim was saved: After Karim Zeroual and his dance partner Amy Dowden repeated their routine all four judges unanimously voted to save them

Karim clearly took the comments on board for the dance-off with his professional dance partner Amy Dowden on Sunday.

After the couple repeated their routine all four judges unanimously voted to save the CBBC presenter.

Craig said: ‘Tonight was easy for me, the best dance tonight was Amy and Karim.’ 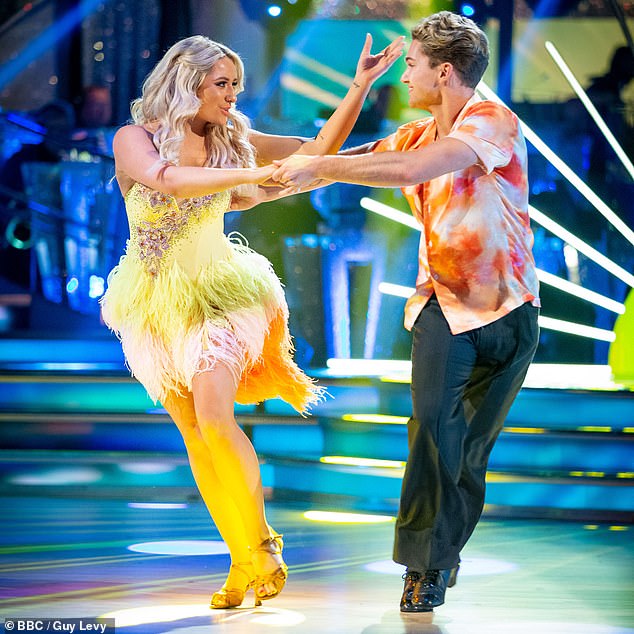 Party time! Kicking off the show, Saffron and AJ took to the floor with a Samba to Walking on Sunshine’ by Take Me to Rio Collective

Motsi added: ‘One couple left me no choice, it was a perfect performance and I’m going to save Karim and Amy.’

Bruno enthused: ‘I want to keep the couple that has proven to be the strongest both technically and artistically.’

Saffron told Tess her Strictly experience had been ‘amazing’, moments before walking off the dance floor for the final time. 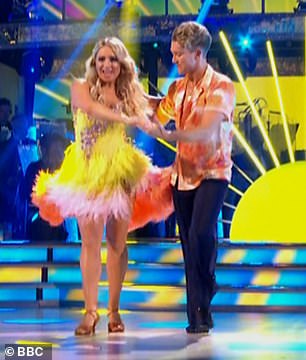 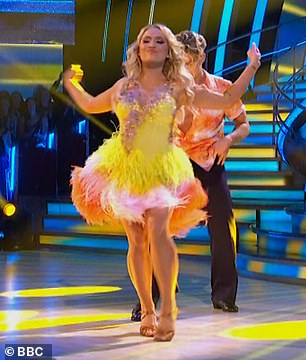 Focused: The young duo were hoping to bounce back after ending up in the dance-off last week 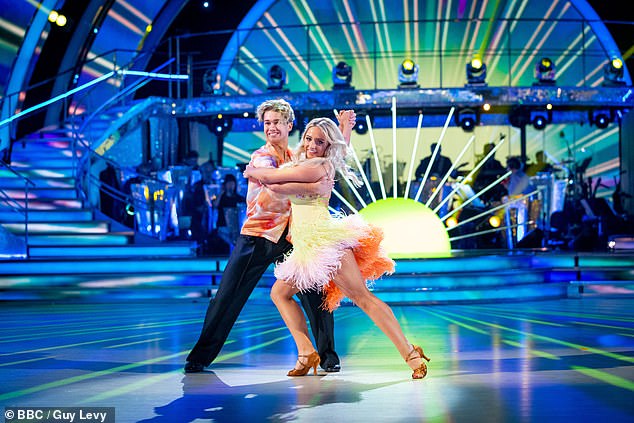 Struggling: Saffron appeared to be having a whale of a time during the performance, but she earned mixed comments from the judges 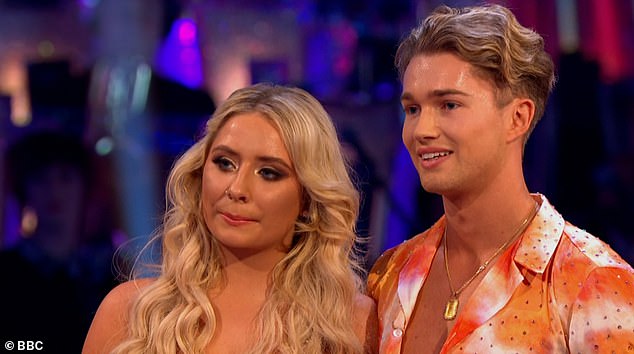 Upset: Divided comments earned Saffron a disappointing score for Week 10, with 26 points out of 40 putting her in joint last place on the leaderboard

‘I’ve had the absolute time of my life and it’s all down to him. I’d like to thank AJ so much, when I look at what I was like on week one I was so embarrassed and shy. He’s really taken me out of my shell. Thank you so much for everything,’ she added.

And AJ was just as impressed with his partner as he praised her positive mental attitude, describing her as an ‘inspiration’.

‘Every single week you’ve approached it with a positive mental attitude and you’ve inspired so many… on your own social media too. 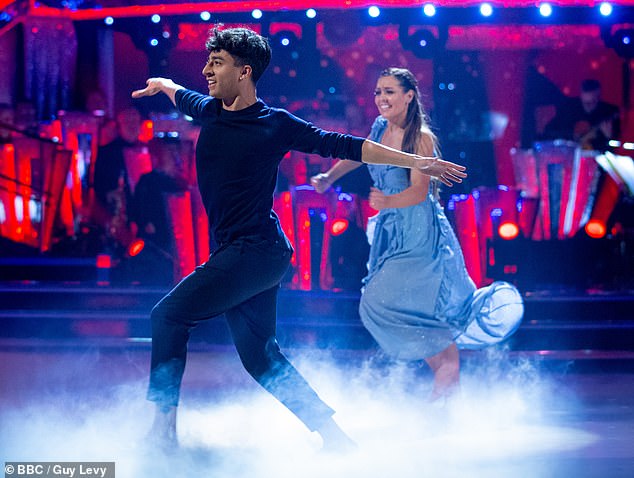 Emotional: Karim Zeroual was next to take to the floor with a Couple’s Choice Contemporary alongside Amy Dowden to Drops of Jupiter by With Confidence 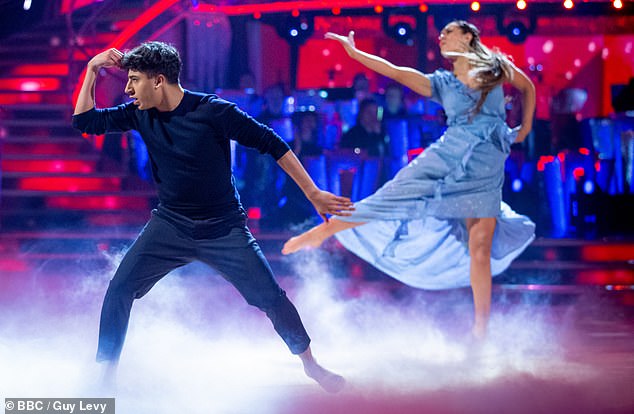 Sweet: Karim dedicated the performance to his mum, and earned a thunderous reception from the audience 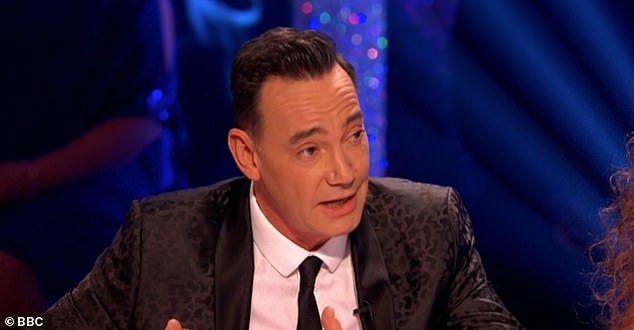 Divided: Craig went onto tell Karim that he felt the dance was lacking an emotional level, and said he was ‘desperate’ to give a ten but couldn’t

‘As a non-dancer starting from day one I’m not going to lie I was a bit scared. But performing those fantastic dances has been amazing. I’ll never ever ever forget that dance. Thank you. The best partner. Thank you.’

It comes after Saffron said she was worried about the Samba, because AJ is usually voted out of the show after the ‘tough’ dance.

The pair scored a disappointing 26 points out of 40, putting her at joint last place on the leader board.

She tweeted: ‘May not of got the highest scores, but the samba is tough!!!

‘AJ has gone home every year with the Samba.. please vote for him and us!!’

The remaining five couples will take to the dancefloor next week when Strictly Come Dancing returns for the musical special on Saturday 30 November at 7.10pm with the results show on Sunday 1 December at 6.20pm on BBC One and BBC iPlayer. 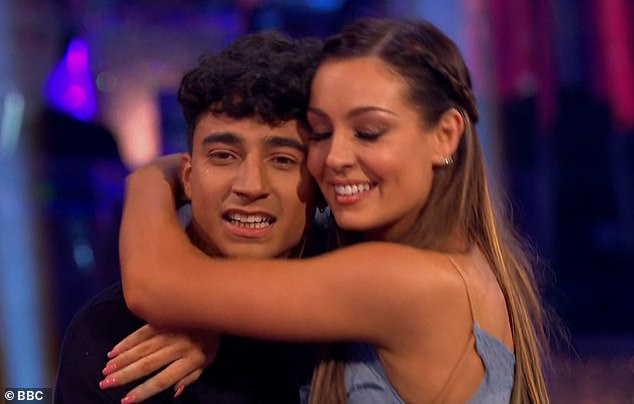 Progressing: Karim vowed that he try to bring more emotion to his next performance, and still earned three tens leaving him in joint first place on the leaderboard with 38 points out of 40