A topless Katya Jones flaunted her toned and tanned physique as she soaked up the sun on holiday in Mykonos, Greece on Friday.

The Strictly Come Dancing pro, 33, covered herself up with a beach scarf as she enjoyed the sand and sea, donning some strappy mustard bikini bottoms.

The stunner collected her windswept chestnut locks in a low ponytail, adding a pop of colour with yellow tassel earrings.

Beach holiday: A topless Katya Jones, 33, flaunted her toned, tanned physique as she soaked up the sun on holiday in Mykonos, Greece on Friday before changing into a tiny bikini

Katya posed up a storm as she artfully placed the silky cover over her chest and sauntered along the shore.

Other snaps saw the performer wearing her matching bikini top after she went for a swim.

The star was also pictured lounging on a sunbed as she adjusted her swimsuit and strolling around with a book. 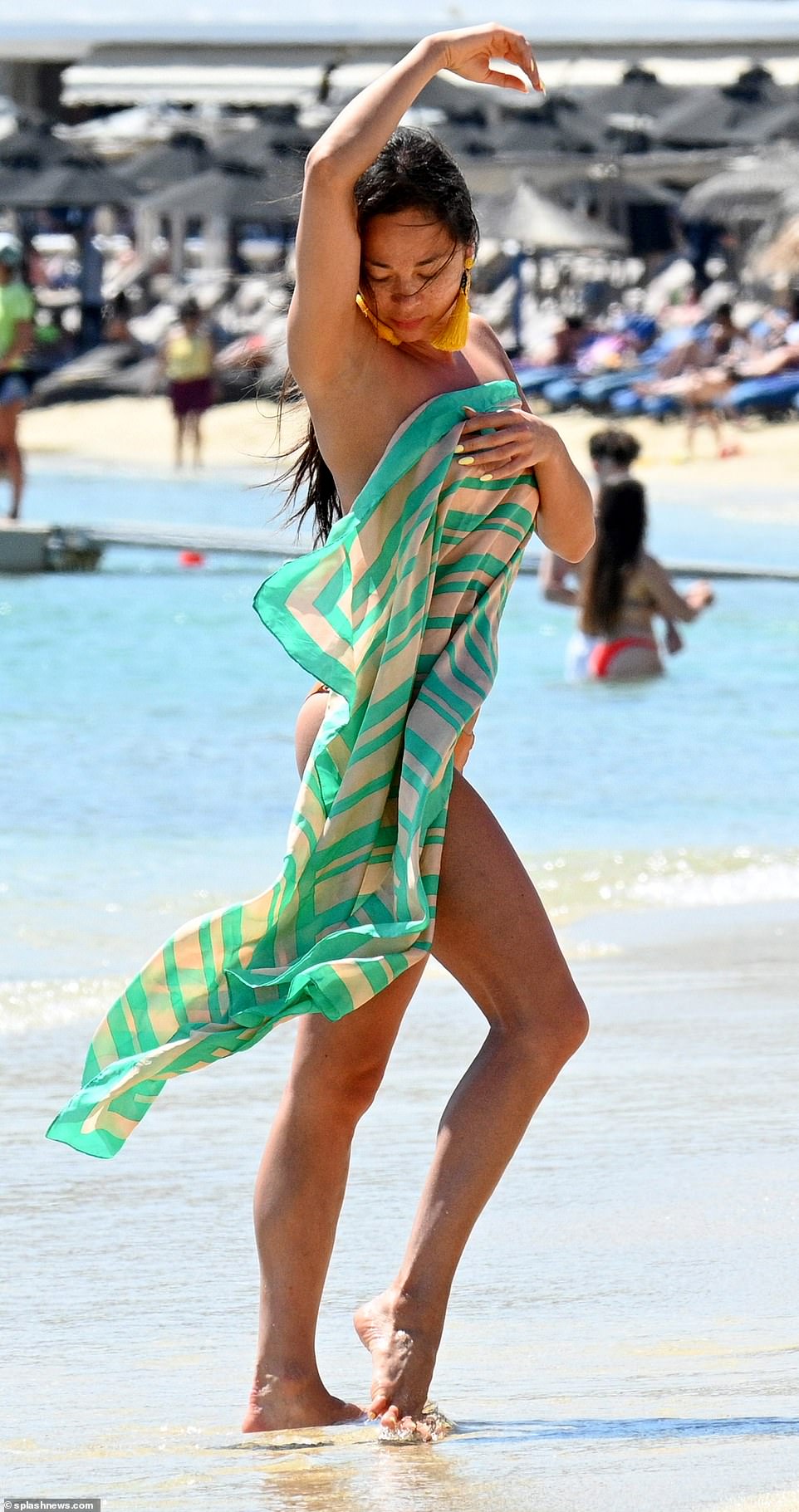 Modelling: Katya struck a number of poses along the shore, covering the chest with a breezy scarf

The comedian, 36, became embroiled in the show’s biggest-ever scandal in 2018 as he was in a long-term relationship with Rebecca Humphries while Katya was married to fellow dancer Neil Jones.

Following the incident, Rebecca released an impassioned statement in which she revealed he called her ‘psycho’ and ‘nuts’ for questioning his friendship with Katya, who he kissed on Rebecca’s birthday – before the photos were made public. 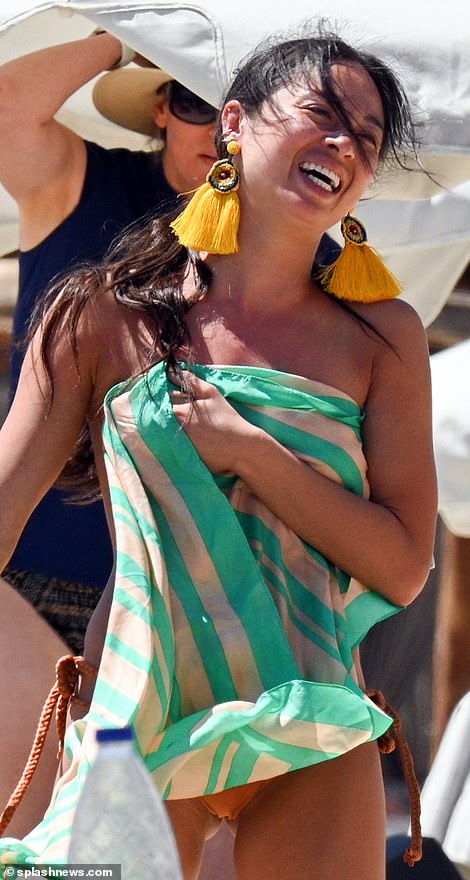 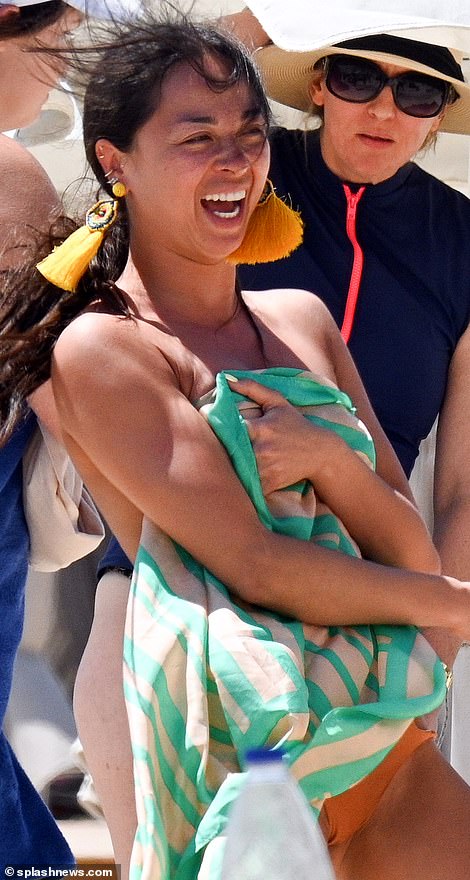 Bronzed beauty: Katya posed up a storm as she artfully placed the silky cover over her chest and sauntered along the shore 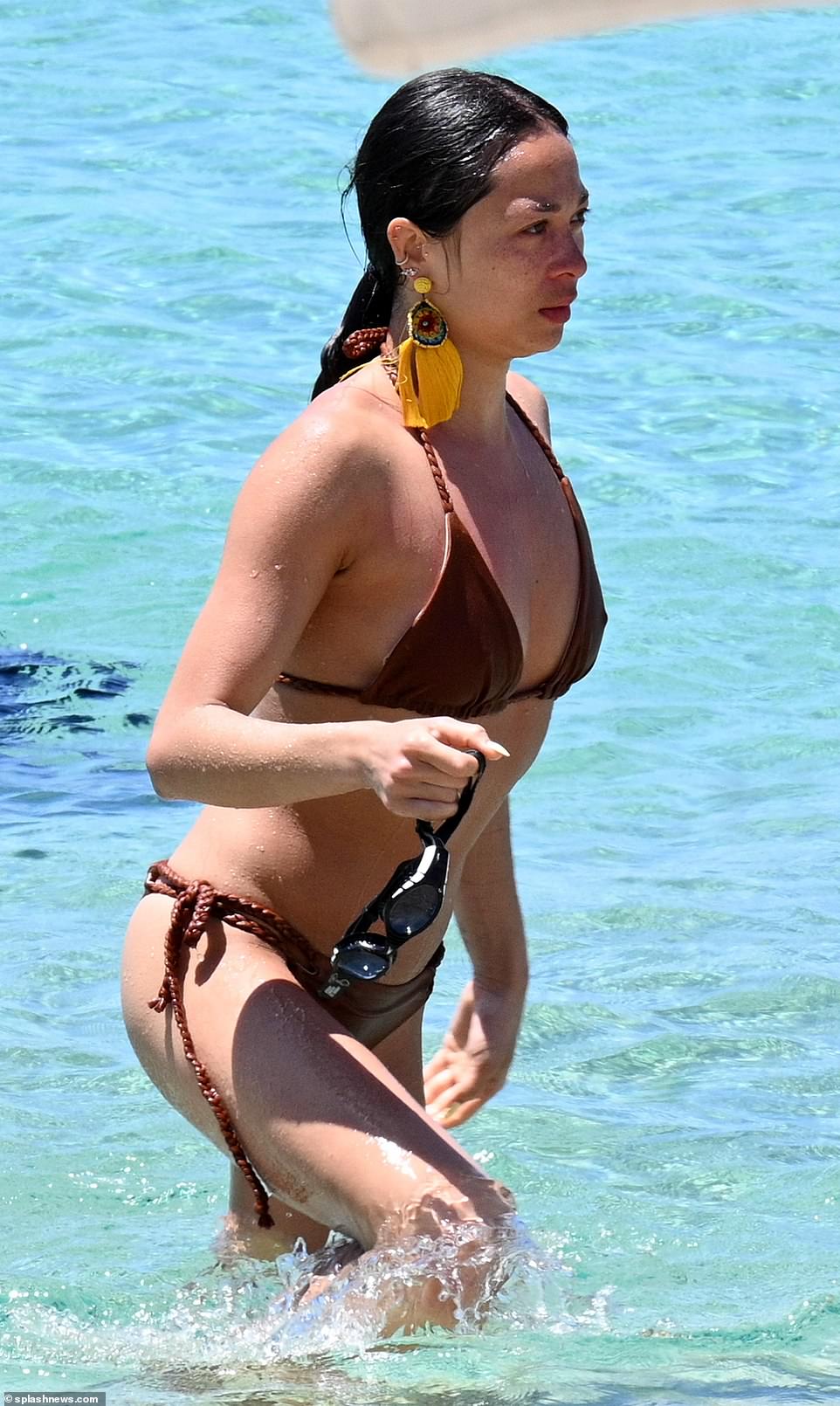 Splashing around: Katya enjoyed a swim while on holiday, taking a dip in a mustard string  bikini

Discussing the drama on new Prime Video show Backstage With Katherine Ryan which starts on June 9, he said: ‘What you are thinking about is: “What have you done to someone?”

‘It’s one thing doing that privately and I don’t judge anyone, because everyone’s got their own backstory, lives or whatever. It was horrific. It was crazy.’

The star said to this day, he is unable to watch Strictly as it ‘messes my head up.’ 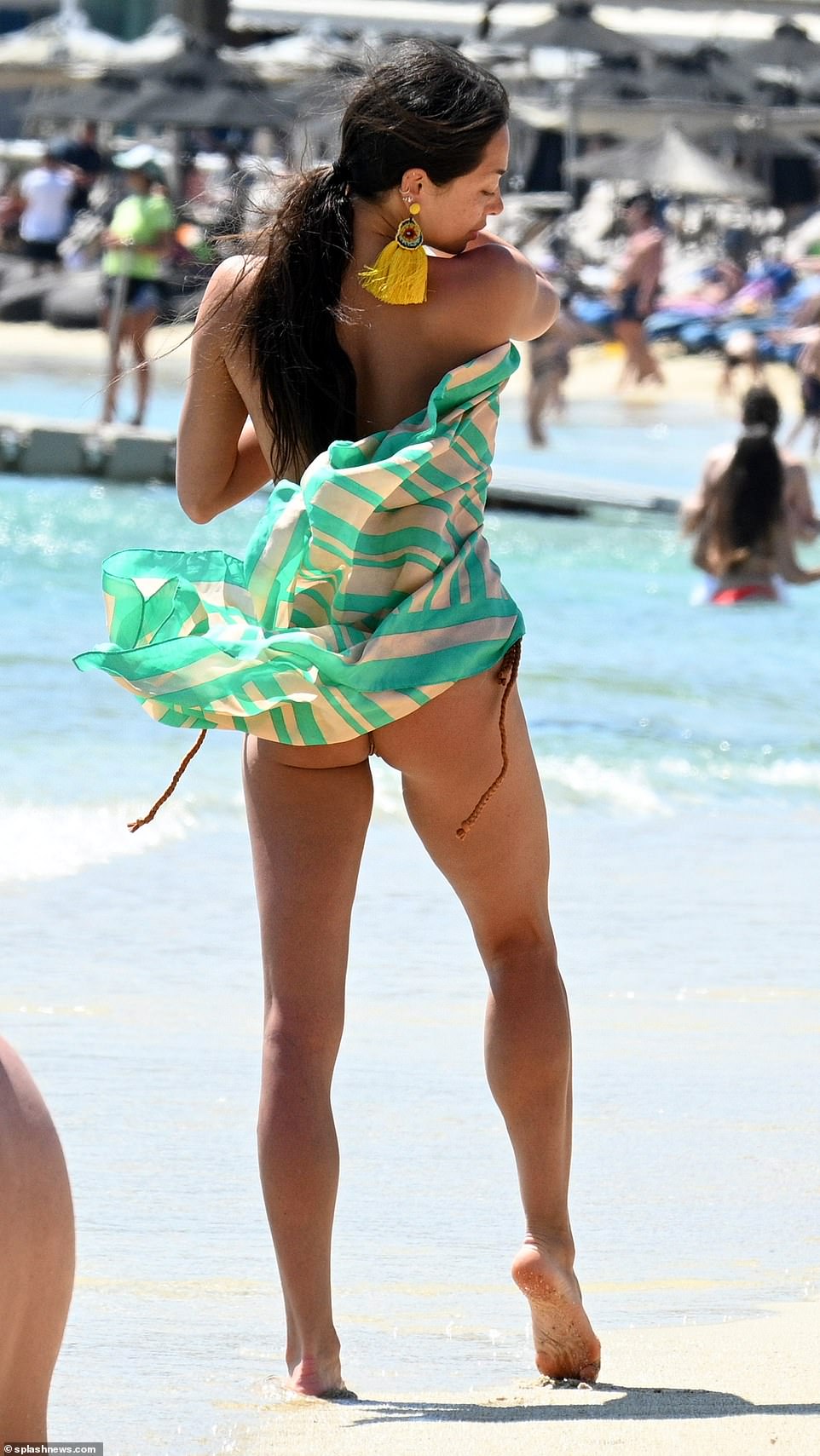 Posing up a storm: The stunner let the scarf float in the breeze as it wrapped around her chest on the beach 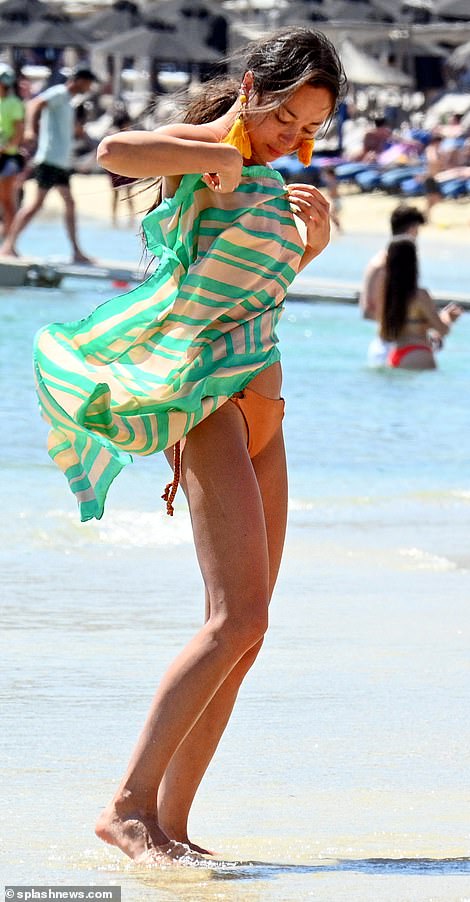 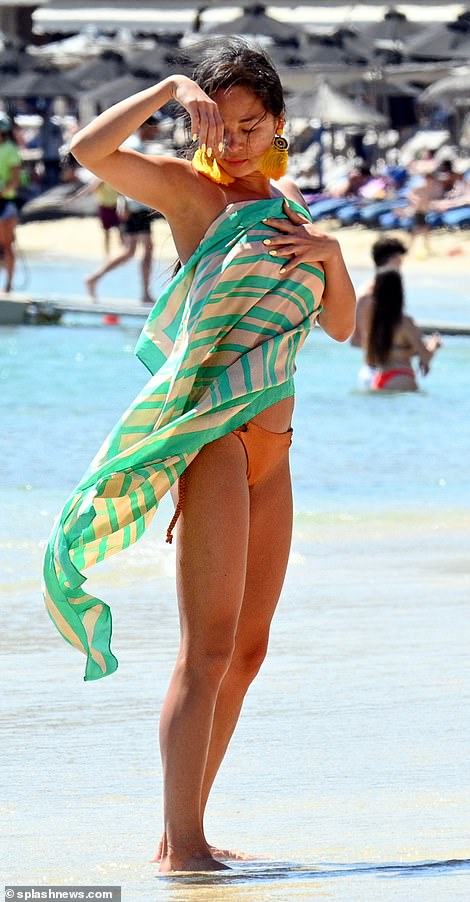 Tanned and toned: Katya gracefully posed on the sand, draping a beachy scarf elegantly around her chest

Wow: The stunner put on a sultry display with purposeful placing of the beachy scarf over her chest

He said: ‘I have such amazing memories of being on that show and then the repercussions of that kiss, it was crazy. I’m just a comic.

‘One day I hope I can look back at that fondly, that first few weeks, because it was the best time of my life.’

In April and speaking in his comedy special Seann Walsh: Kiss, the star told how he was ‘sorry’ for the kiss then and is still sorry now. 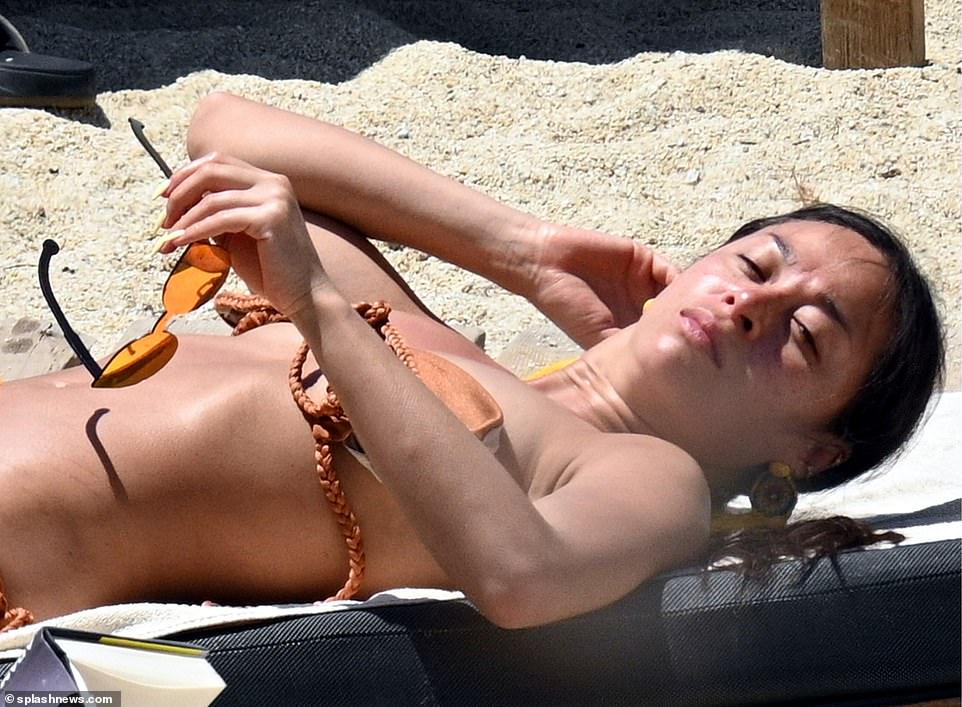 Relaxing: The star was also pictured lounging on a sunbed as she adjusted her swimsuit and strolling around with a book 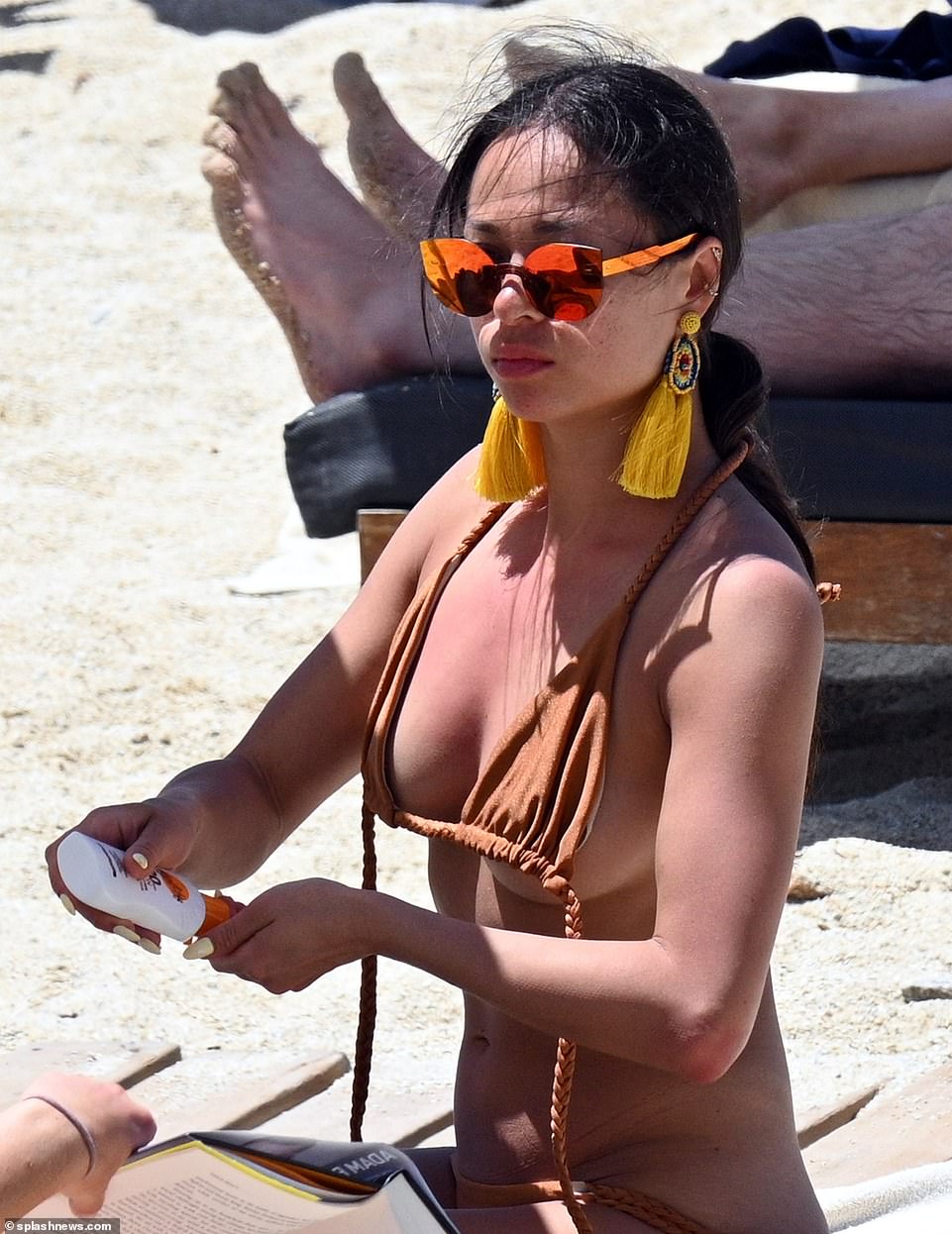 Getting some sun: Katya applied sunscreen as she worked to get an even tan on the beach in  Mykonos

Recalling how he learned their PDA had become public, he said: ‘I left the wardrobe department and before I could order my first beer, my agent came over to and asked if he could have a word with me outside.

‘I thought ‘he is going to tell me I have got Michael McIntyre’s Big Show! I had better act surprised!’

‘Turns out, I didn’t have to act surprised. We went into the BBC carpark, my agent looked over his glasses and said, ‘about 20 minutes ago, they posted a photo of you kissing Katya outside a pub’. 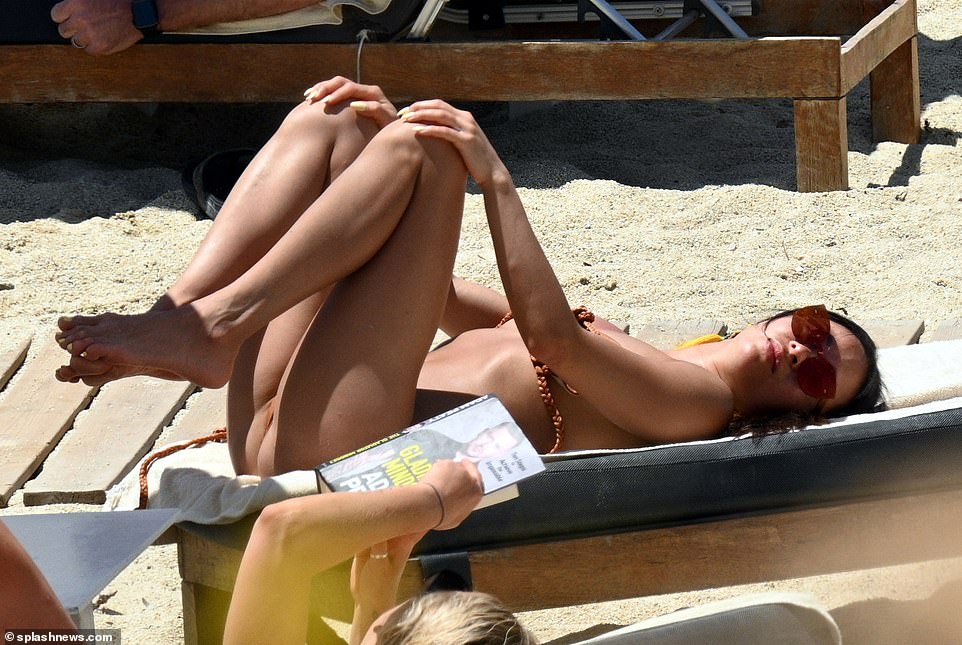 Chilling out: Katya relaxed on the sunbeds as the star enjoyed a day out on the beach in Mykonos 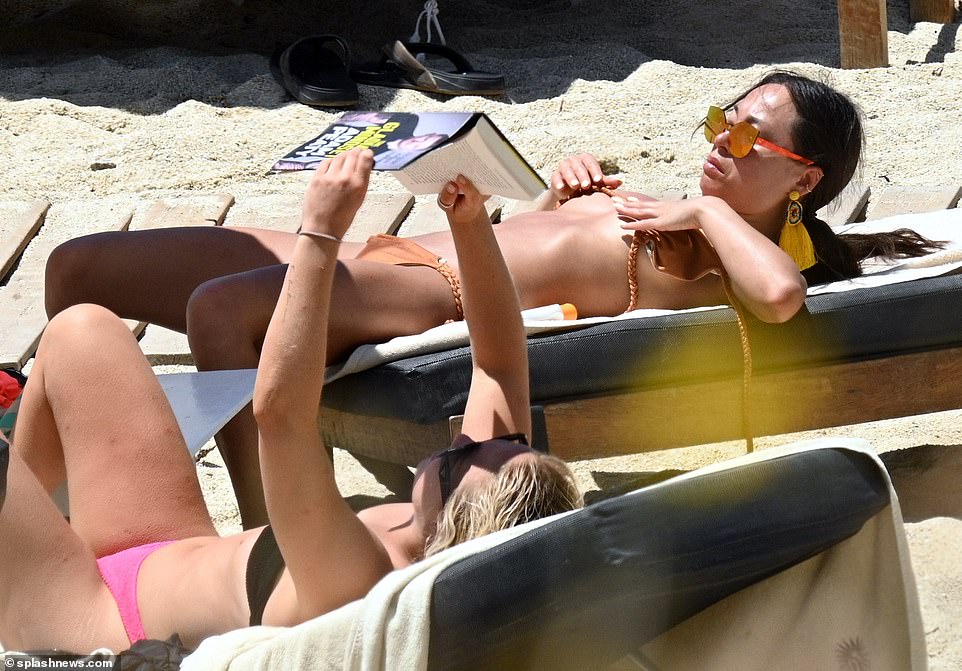 Even tan: Katya adjusted her bikini top to make sure she got an even bronzed tan as she lazed around the beach

‘It was at that exact point that my life would turn upside down – the dream turned into a nightmare.’

Explaining the incident, he said: ‘I was in a relationship, my dance partner Katya was married.

‘After training we went for a drink, one thing led to another and we were photographed kissing outside a pub.

Beach day: The star enjoyed a day of swimming and tanning, and was seen strolling around the beach

Sun-soaked fun: Katya flaunted her toned stomach and lean physique as she emerged from the water

He said: ‘I was then on the receiving end of thousands of abusive messages online. I did begin to wonder “have I done something that wrong?” 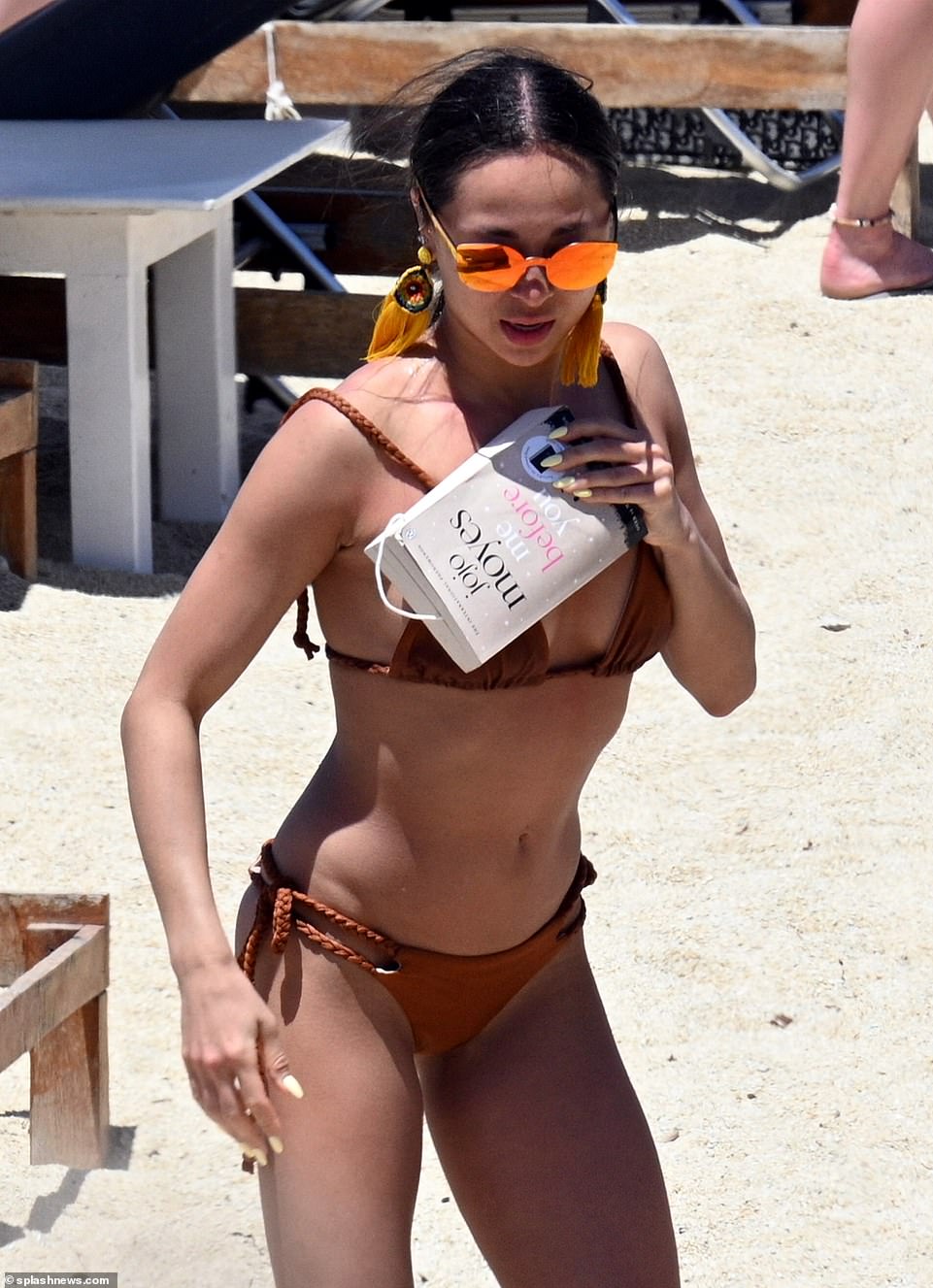 Holiday reading: Katya picked up a book as she wandered around the beach, enjoying the sunny weather 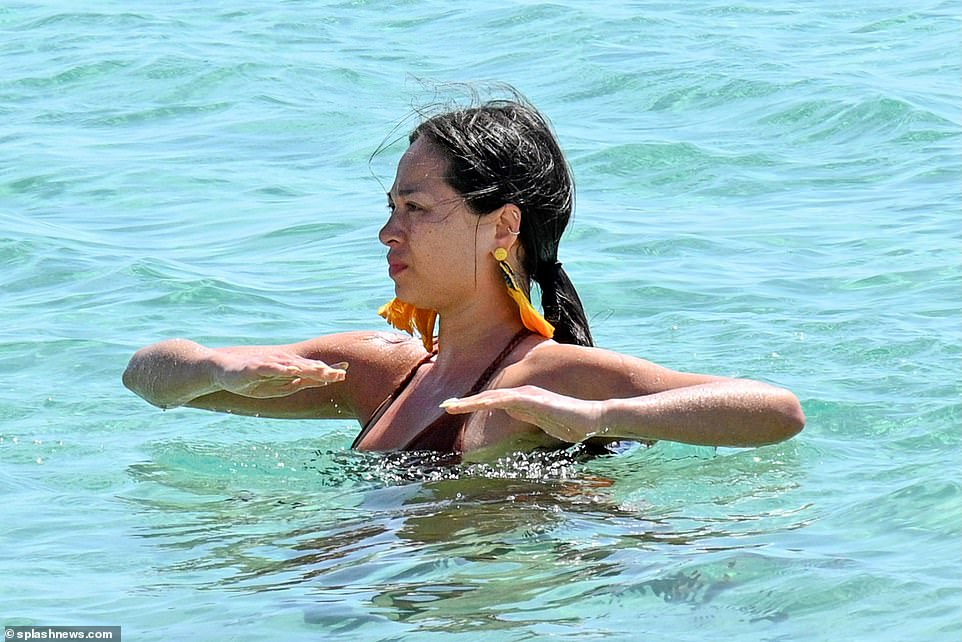 Cooling off: The star went for a dip in the sea for swim, wearing a deep yellow bikini with tassel earrings 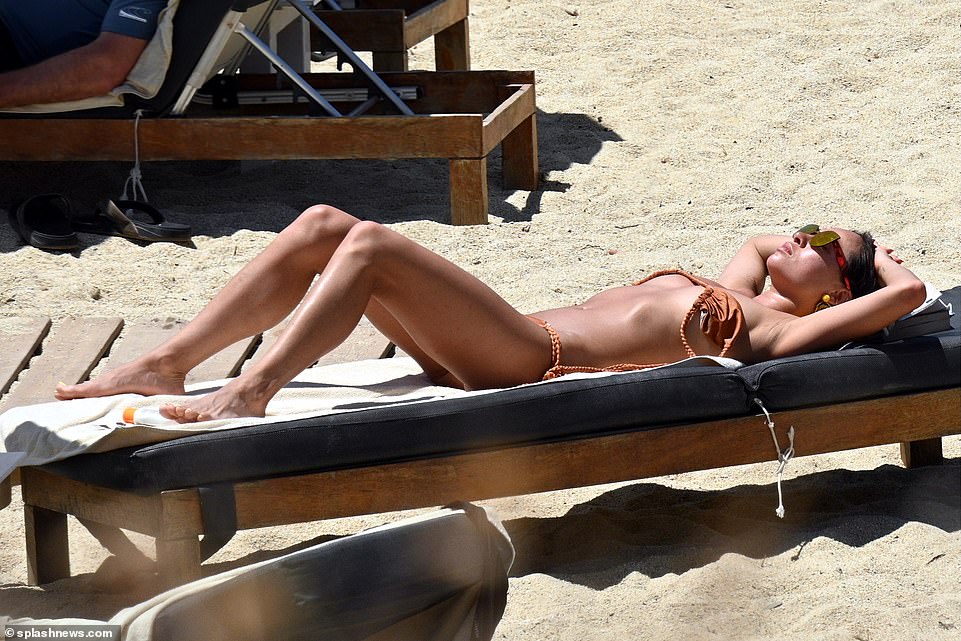 Heating up: The star adjusted her bikini top as she enjoyed the sunny weather on the beach in Mykonos

‘I managed to keep Brexit off the front pages for 12 whole days, but I hated it.’

‘I thought “I just had to get out of here” and I left for America. Just the break I needed.’

While Katya was supported by her husband Neil after the ‘drunken mistake’, their marriage did not last as they announced their split in August 2019.

The dancers confirmed they were splitting in joint Instagram statements, but despite writing they had mutual ‘respect’ and ‘love’, a source claimed Katya’s infidelity was something her husband couldn’t get over.

The pair have remained friends since the split and continue to be professional dancers together on Strictly. 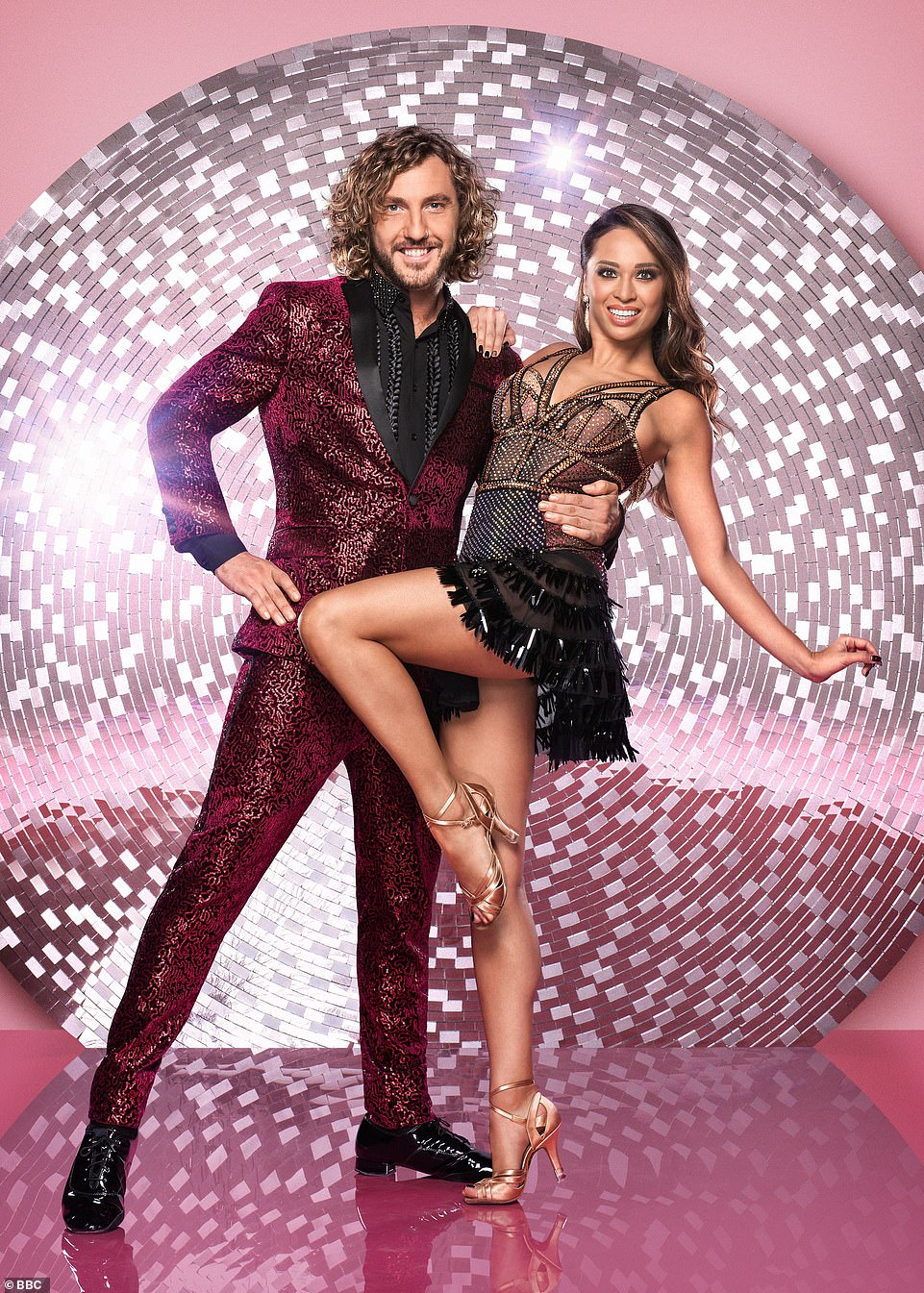