For the average newly separated couple, the idea of having to work in close proximity with their former partner is the stuff of nightmares. Worse still is having to do it on the Strictly Come Dancing stage in front of millions of TV viewers.

But that’s exactly the situation Strictly professionals Karen and Kevin Clifton faced last night as they whirled their way through the opening dance routine of the new series, just six months after announcing that their marriage was over.

So little wonder that Karen, the show’s longest serving female dancer, admits she ‘had to put her big girl pants on’ as she prepared to face the spotlight as a newly single woman.

Because as amicable as the end of the couple’s three-year marriage has been – outwardly at least – it has nonetheless taken its toll, as Karen confides in her first solo interview since the split.

‘I’ve taken a big hit,’ she admits. ‘I had to realise that I’m 36 years old. I’m not a kid and it has taken me a lot of therapy and life coaching to get through this. I have found it really difficult.’

She’s not the only one – the news stunned Strictly viewers too.

After all, Karen and Kevin-from-Grimsby, as the late presenter Sir Bruce Forsyth liked to call him, were two of the show’s most admired professionals, and their unlikely pairing – she the sassy Venezuelan, he the middle-class lad from Lincolnshire – has latterly become something of a lynchpin of the show. 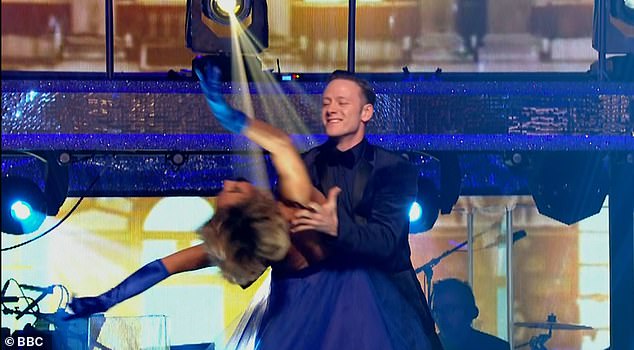 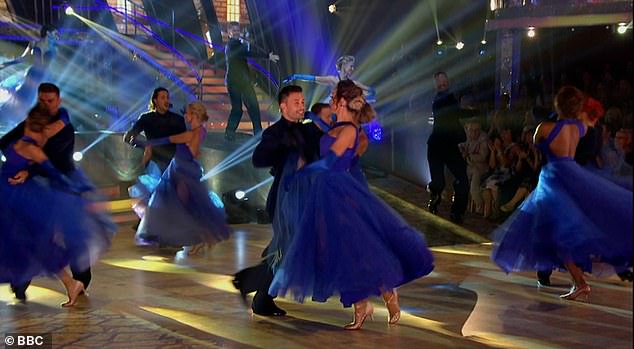 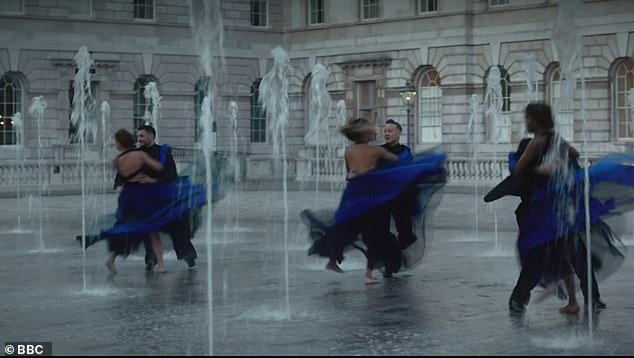 Strictly stars Kevin and Karen have insisted they will try to remain partners on a professional level, despite no longer being romantically involved

Kevin declared it was love at first sight when their paths collided nine years ago in New York while both were on a dance tour. And having married in July 2015, theirs was seen – at first, at least – as a rock-solid union.

In fact, the couple were destined not to make it even to their third wedding anniversary. The turmoil began a year after they tied the knot, amid suggestions that the close friendship between Kevin and his then Strictly partner Louise Redknapp was… well, a little too close.

Eyebrows were raised further when Karen and Kevin didn’t dance together in last year’s final, although it took them until March this year to confirm that their married life was over.

‘It was an intense time that prompted anxiety,’ Karen says of those difficult few months.

‘I found the split very hard to deal with and I panicked.

‘We weren’t perfect but we were a normal couple who began to have rocky moments and we didn’t know how to handle it.

‘Strictly was the glue that was keeping us together but it was also the workload that was leaving us with no time to communicate.

‘To some, it’s like “Oh, you’re both on television and living a glamorous life” but it wasn’t at all like that.

‘We were working from 6am until 11pm and by the time we got home there would be no time to do anything. There was no opportunity for us to connect and we started going in completely different directions.

‘We communicated well professionally, but that didn’t translate into our relationship.’ 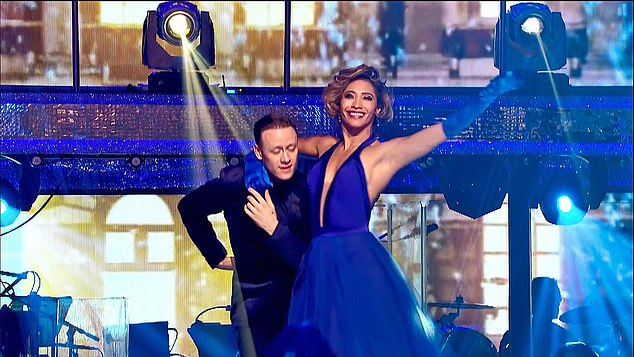 Since then, both have been at pains to insist that they remain the best of friends. Karen admits, however, that piecing her life back together and learning to live as a single woman again has been far from easy.

‘I have had to change the way I felt about things, although I don’t have any regrets about how it worked out,’ she says.

‘Eventually we both accepted that we couldn’t make it work. It was too late. We thought we were compatible with one another and we thought our relationship was going to be the best thing. It turns out that it wasn’t.’

It is perhaps telling that Karen is seeking help and support from her friend and life coach Camilla Dallerup. A former Strictly professional, Camilla can lay claim to the dubious honour of being the first victim of the famous Strictly curse, which has seen a number of previously strong partnerships crumble against a backdrop of pulsating rumbas and salsas.

The latest involved Louise Redknapp and Jamie, her husband of 18 years.

Camilla was engaged to fellow dancer Brendan Cole but their relationship ended following rumours of an affair between Brendan and his celebrity partner, TV presenter Natasha Kaplinsky, in 2004. 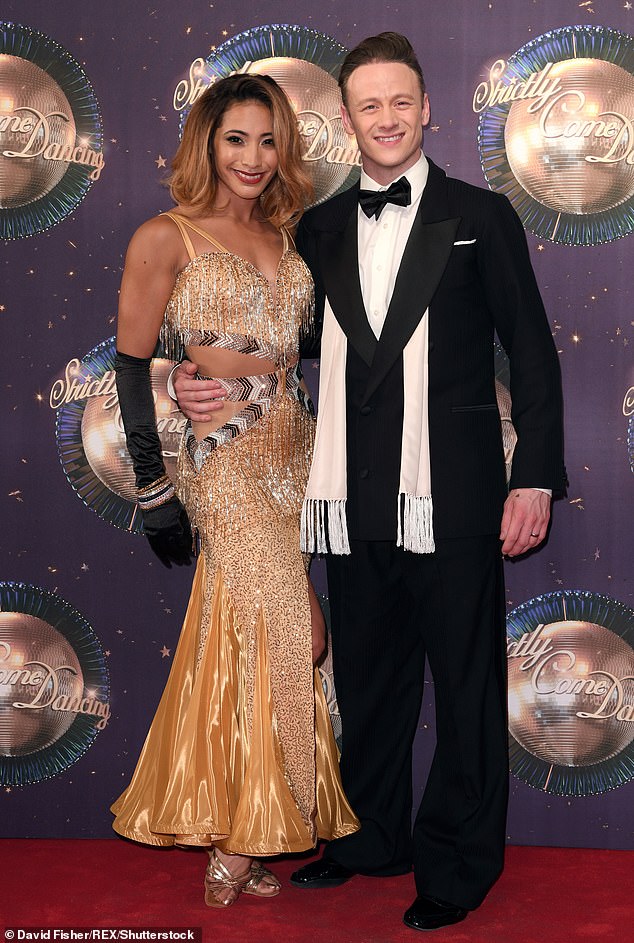 Happier times: The showbiz couple put on a brave face during their joint Karen and Kevin Live tour which wrapped up in July 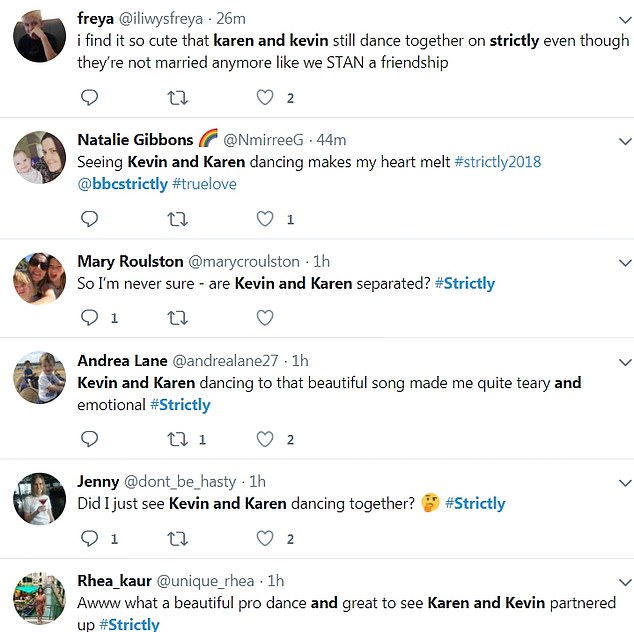 Fans of Strictly were delighted that the popular pair danced together on the show Saturday night, with some saying it even made them ’emotional’

Camilla carried on working on the show until 2009, but has since retrained as a therapist and now lives and works in Los Angeles.

‘I have sessions with Camilla,’ confirms Karen. ‘We FaceTime. I work on things from my past with her. I work to understand the pressure I’m under and learn to take better care of myself.

‘I’d like to think that I can help inspire other women, too. I’m undergoing therapy twice a month and I have also been doing hypnotherapy to treat my anxiety. That has been really helpful.’

Strictly is now back for its 16th series – contestants battling it out to win the coveted glitterball include BBC news anchor Kate Silverton, What Not To Wear host Susannah Constantine and campaigner Katie Piper.

The show remains hugely popular – 8.5 million viewers tuned in two weeks ago to watch the professionals being paired with celebrities.

Karen is at pains to emphasise that she does not consider her own relationship to be a victim of the Strictly curse – although she acknowledges the pressure taking part in the series can put on couples.

‘When you dance with someone, you have a chemistry and a bond like nothing else. It’s so intimate. You’re telling a story,’ she says.

‘You spend so much time with that person one on one, and the way you’re connecting with them is not something you get every day.

‘You’re trusting someone. You’re talking to them and you’re caring for them lots. It’s a very scary show to do and your partner is your safety blanket, your comfort.’

In the Cliftons’ case, the programme’s long hours and demanding schedule took a heavy toll.

When you dance with someone, you have a chemistry and a bond like nothing else. It’s so intimate

‘Both Kevin and I are professionals. We take our jobs on Strictly so seriously, so it was intense,’ Karen explains. ‘We were working so hard and enjoying these great moments on Saturday nights on the show, then we would be on red carpets at parties, but it was what happened when we got home that was the problem.’

Or, perhaps more pertinently, what wasn’t happening. ‘We weren’t getting what we both needed from our marriage any more and that was a huge thing,’ confides Karen, with a mischievous glint in her eye. ‘We weren’t doing the things we would usually do.

‘You think you’ll work on this stuff later, but because of work you don’t address the problems. It’s very hard to pay attention to your relationship when you’re paying so much attention to work.

‘Then, it just snapped out of nowhere and we realised that the love we had for one another had gone. It was such a sad day.’

Even now, many months on, Karen, who grew up in New York, looks overwhelmed with sadness as she recalls the day the couple were forced to confront the fact that their marriage was over. 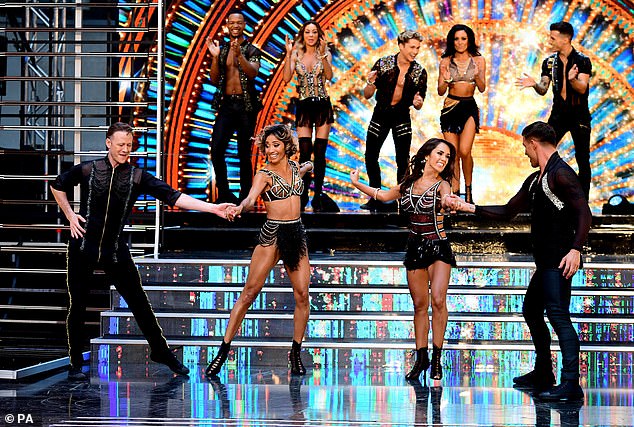 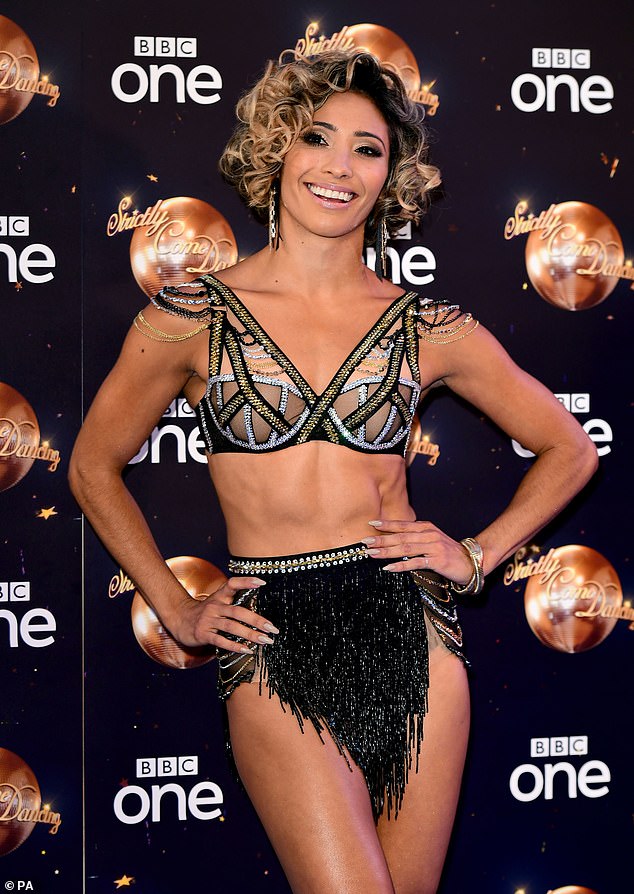 Karen has revealed that although their life looked ‘glamorous’ on the outside, it wasn’t all like that. She said: ‘Strictly was the glue that was keeping us together but it was also the workload that was leaving us with no time to communicate’

‘It was heartbreaking for me to realise that the person I had spent seven years with was no longer the person I’m in love with,’ she reflects. ‘We woke up and were in bed when we had “the talk”. We had to be real with one another and make a really hard decision.

‘We tried to figure out if it could be saved but we didn’t find a way.

‘We both cried as we realised we were just not working any more.’

It was, you imagine, doubly hard for Karen, for whom the marriage is the second to end in divorce. Ten years ago, she split from American dancer Matthew Hauer. In the immediate aftermath of their separation, Kevin agreed to move out of the marital home, leaving Karen to look after the couple’s dog Betty, who was rescued from the streets of Bosnia three years ago.

Betty has latterly been joined by a second rescue dog, Marley, and Karen says she regularly sends pictures of both to Kevin after she won the battle to keep their first canine charge.

‘I was always Mummy,’ she admits, somewhat defiantly.

It’s one hint of tension in an interview in which Karen otherwise repeatedly emphasises the couple’s ongoing friendship.

‘We WhatsApp one another and we have a nice friendship now,’ she says. ‘That might sound weird to some people but we have learned to communicate again.

‘We laugh and giggle together in a way that we didn’t for a long time, particularly at the end of our relationship.’

The reality though, is that after years as one half of a duo, this series of Strictly – Karen’s seventh – is the first in which she will compete as a single woman.

To mark the shift, she has already chopped her dark locks into a short bob – a decision she describes as liberating.

We WhatsApp one another and we have a nice friendship now

Her latest celebrity partner is Casualty actor Charles Venn, while Kevin has been paired with presenter Stacey Dooley.

The big question, of course, is whether the Cliftons will be able to continue to share dance space together quite so comfortably once they get new romantic partners.

It would, Karen agrees, be ‘weird’ when her former husband gets a new girlfriend – and in her own case, romantic attachment lies some way in the future.

‘I’m spending time learning to love myself before I love someone else again,’ she says.

Either way, she knows one thing for sure.

‘I’ve married two dancers. Will I marry another? No way!’