Long before she was a stand-up comic and actor, Strictly star Ellie Taylor was a model, which you might imagine means she has a certain elegance about her. Not the way she tells it.

‘Oh I was rubbish,’ she says. ‘I was tall, but gangly with it. I have no natural ability to hold myself, so on a shoot I’d stand there like a sack of potatoes.

‘It was not the most successful of modelling careers.’

She hated it, and after a nudge from a friend to take part in a standup comedy open mic night, she fell in love with making people laugh. Her break eventually came on the ITV comedy talent show Show Me The Funny and she found her niche on shows ranging from Mock The Week and The Mash Report to the Emmy award-winning US show Ted Lasso.

Strictly star Ellie Taylor (pictured) used to be a model but hated it and took up standup. Her break came when on the ITV comedy talent show Show Me The Funny

Yet she confesses that she’s never shaken off that feeling that she should be more poised. ‘I always wanted to be more elegant and in control,’ she admits.

Today though, aged 38, she can say that she finally feels less… well… like an ungainly giraffe. Her secret? Firstly, motherhood.

She had baby Valentina (now her biggest Strictly fan) in 2018. ‘After I had my baby I felt more at peace with my body. I was chuffed it had carried a child.’

More recently there has been Johannes Radebe, her Strictly partner, whose mission has been to convince her that she can make those limbs glide. ‘I could have done with him on modelling shoots, because he would quite literally put me in the position I needed to be in.’ 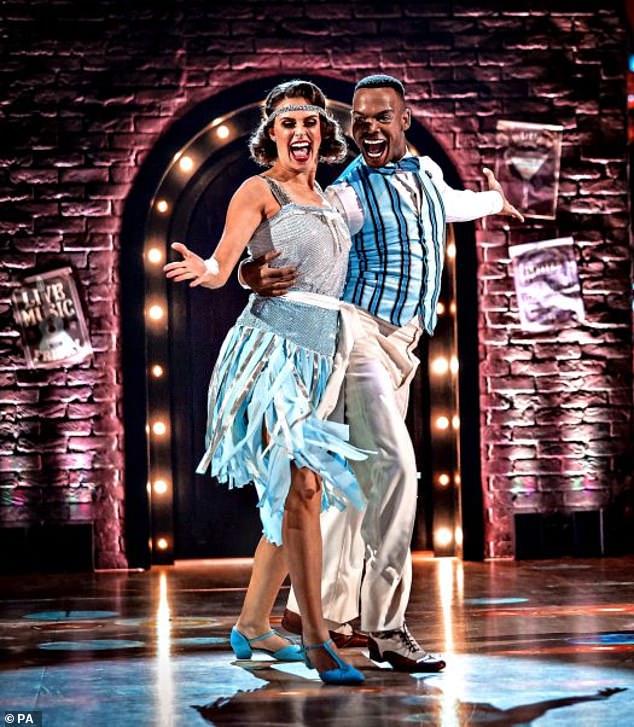 Ellie with Johannes Radebe, her Strictly partner, whose mission has been to convince her that she can make those limbs glide

She apologises for being cheesy about this, but her Strictly journey has been life-changing.

‘That awkward, gangly teenage thing, I never really got over it. But Johannes got me thinking, ‘Maybe I can be poised and in control’.’

Obviously the series has also wreaked havoc with her home routine. ‘I haven’t emptied the dishwasher for six weeks,’ she tells me when we meet on Zoom.

‘My husband (CNN reporter Phil Black) has had to pick up all the balls I’ve dropped. He even makes my lunch, and dropped it off the other day when I forgot it.’

Dare we mention the Strictly curse? One of the funniest routines Ellie has done was a skit on satirical show The Mash Report, pondering how the dance couples end up having affairs.

In character as a newsreader, she told viewers, ‘Experts studying the so-called Strictly curse have been unable to fathom how two people spending days rubbing their genitals together to romantic music could possibly end up sh***ing.’

I was tall but gangly with it. I have no natural ability to hold myself so I’d stand there like a sack of potatoes

Today, having experienced the competition from the inside, she confirms that you just get used to all the intimate ‘rubbing’ that goes on. ‘We got over that quite quickly.

‘It is a weird thing to be that close and to have to do things like stare into someone’s eyes for that long. Even staring into my husband’s eyes like that would be weird.

‘But you do get used to coming home smelling of another man.’ She inhales deeply. ‘It’s normal for me to now go, ‘Oh I smell of Johannes’. Very odd.’

Doubtless her stint on Strictly will find its way into some comedy routines in the future, but for now Ellie has a new show that she’s fronting, which was filmed before Strictly.

It’s hard to know how to describe You Won’t Believe This, but she gamely has a go. ‘It’s a cross between Would I Lie To You? and Line Of Duty, with maybe a bit of Gogglebox going on.’

Four contestants tell a story, but three of them are lying. Two real detectives grill them, and another contestant listens in. 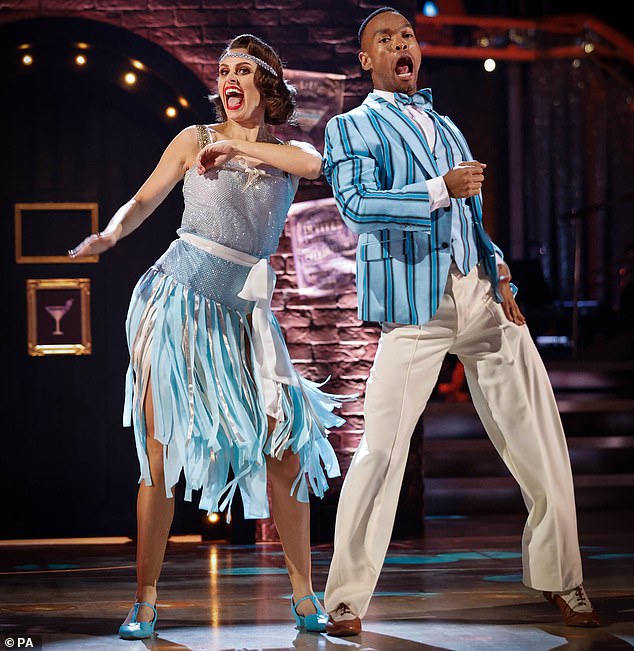 If that person can identify the truth-teller, they win a cash prize. If they pick one of the liars instead, the fibber wins the money.

It’s an odd hybrid, but Ellie’s an engaging presenter, joking with the contestants and adding a bit of banter to proceedings. ‘I absolutely love hosting,’ she says.

Her career has gone from strength to strength since those modelling days and in 2020 Ellie landed the role of Flo ‘Sassy’ Collins in Ted Lasso, the series about an American being hired to coach an English football team. She was floored when the show became a global smash.

‘I haven’t been in the US since it aired, but my friends there tell me I have no idea of the scale of it. Last Halloween there were people dressing up as my character. I couldn’t believe that.’

She’s still adjusting to the Strictly experience, which means that stars go mainstream, fast, and get recognised in Sainsbury’s. She tells me that some of her neighbours didn’t know what she did for a living until Strictly.

‘They’re an older couple, and I have loads of chats with them, but they obviously didn’t know what I did. I get the impression they switched on Strictly one night and said, ‘That’s the girl down the road we gave the cooking apples to’. I love that!’