‘This week two malarkey is really hard!’ Strictly’s Ranvir Singh is forced to host GMB with her foot dipped in ICE as she struggles with hours of training

Ranvir Singh was forced to host Wednesday’s Good Morning Britain with her foot soaked in ice, as she struggles with long hours of training for Strictly Come Dancing.

The broadcaster, 43, explained she’s in the midst of learning the Quickstep for the second live show on Saturday, and has found it ‘hard’ to keep up with the challenging routine.

Ranvir impressed viewers and the judges when she took to the stage for her debut Strictly performance with pro Giovanni Pernice last week with the panel praising her vast improvement from the launch show.

Difficult: Ranvir Singh, 43, was forced to host Wednesday’s Good Morning Britain with her foot soaked in ice, as she struggles with long hours of training for Strictly Come Dancing

Ranvir told Adil Ray her feet desperately needed some relief after hours in training, with the camera then showing a glimpse of then in a box filled with ice water.

She explained: ‘This week two malarkey is really hard. You’ve got hardly any days and you are learning a whole new dance.’

Later in the show Lorraine Kelly also praised Ranvir for her stellar debut performance, leading her to say: ‘I was invoking you, the power, the presence… I have a very smiley very fast dance this week so I need you to send me good vibes.’ 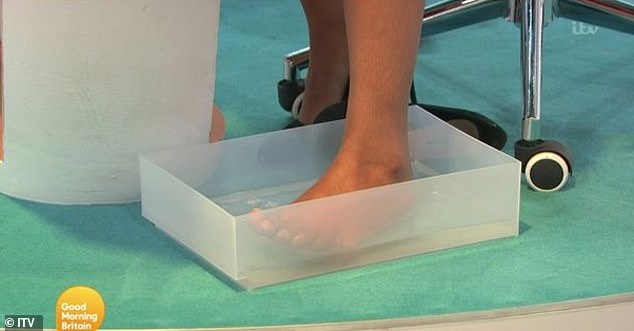 Ouch! The broadcaster revealed she’d been soaking her foot in a box of ice water as she began to fell the perils of her long hours in training 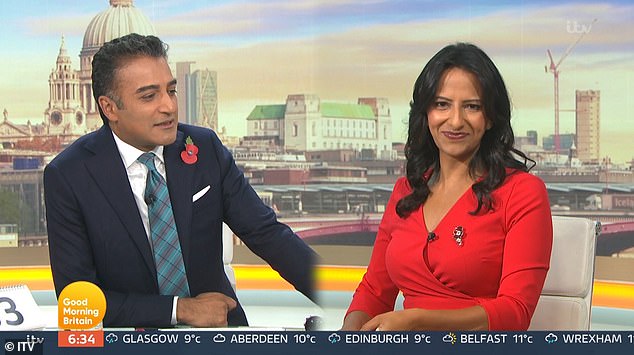 Ranvir added that the water was helping to soothe her tired feet ahead of her next training session, as she prepares to dance the Quickstep this weekend.

She and Giovanni will take to the floor for their high-energy performance to Sunshine Of My Life by Stevie Wonder.

The dancing duo will hope to avoid the first elimination of the series with the results show set to air on Sunday. 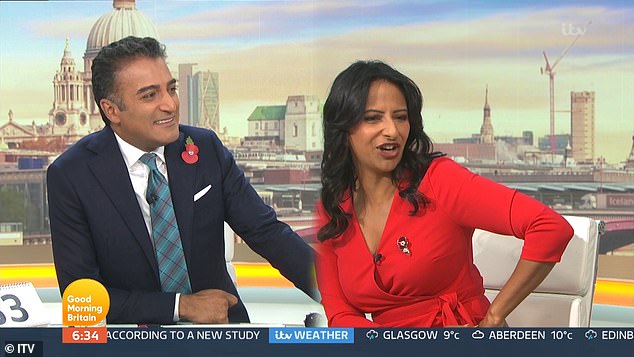 Difficult: She explained: ‘This week two malarkey is really hard. You’ve got hardly any days and you are learning a whole new dance’

Last week her debut dance – a Paso Doble – impressed the judges with Craig Revel-Horwood praising: ‘Darling you used that dress like a diva drag queen, like your life depended on it, a great first dance!’

Calling her a ‘superstar’, Shirley Ballas added: ‘You lived every moment of being that Spanish lady with the hands, the basic contemporary style you did Gio was brilliant, you show you can be a superstar.’

While Motsi Mabuse said: ‘I have to say for me you are the one who has most improved since the launch show… you built a great foundation, I adored it, I loved it.’

Good Morning Britain airs weekdays from 6am on ITV. 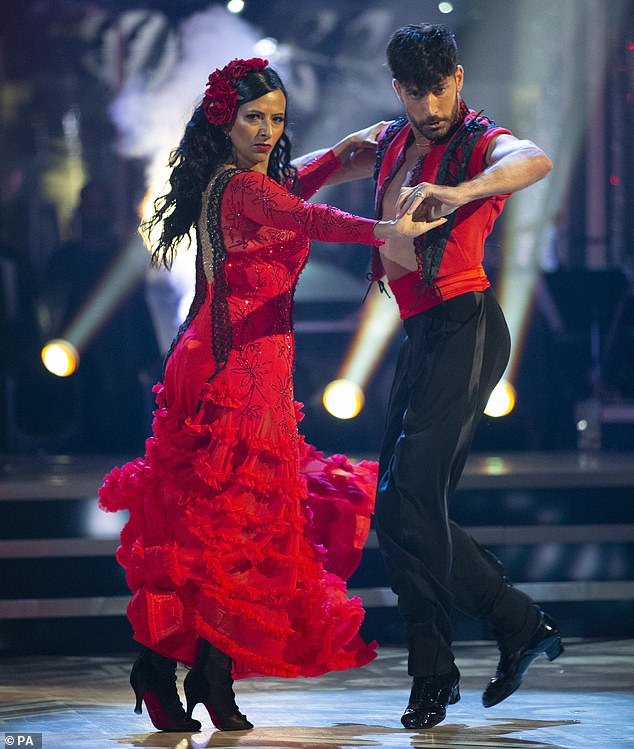 Sultry: Ranvir impressed viewers on Saturday when she took to the Strictly dancefloor for her debut Strictly performance, a Paso Doble with Giovanni Pernice