Strictly Come Dancing’s second live show of the series hit BBC One on Saturday evening, with the 15 couples set face the first public vote of the series.

And topping the leaderboard so far was Radio 2 DJ Richie Anderson and pro partner Giovanni Pernice – who took to the dancefloor with a Quickstep dance, which was dubbed ‘absolutely beautiful’ by judge Motsi Mabuse.

The pair put on a united front during the show and appeared to brush off recent rumours of a fued behind the scenes – following reports that they ‘haven’t clicked’ off camera.

As the pair donned matching sequinned suits for the visually pleasing dance, the performance was dubbed ‘absolutely beautiful’ by Motsi – as Shirley got up onto her feet.

The head judge explained: ‘I wasn’t quite expecting it to be so syncornized and so good, today you were laser focused – you did amazing. What a transformation!’

‘You’re a real showman, I loved it. If you could put that sequin jacket back in my room I’d be absolutely delighted,’ jested Anton.

And discussing the dance backstage following the performance, Richie explained: ‘This dance required a lot of good posture. And look at me, I’ve got the posture of Mr. Bean.’

Continuing: ‘Thank you for being so patient,’ as he turned towards Giovanni. 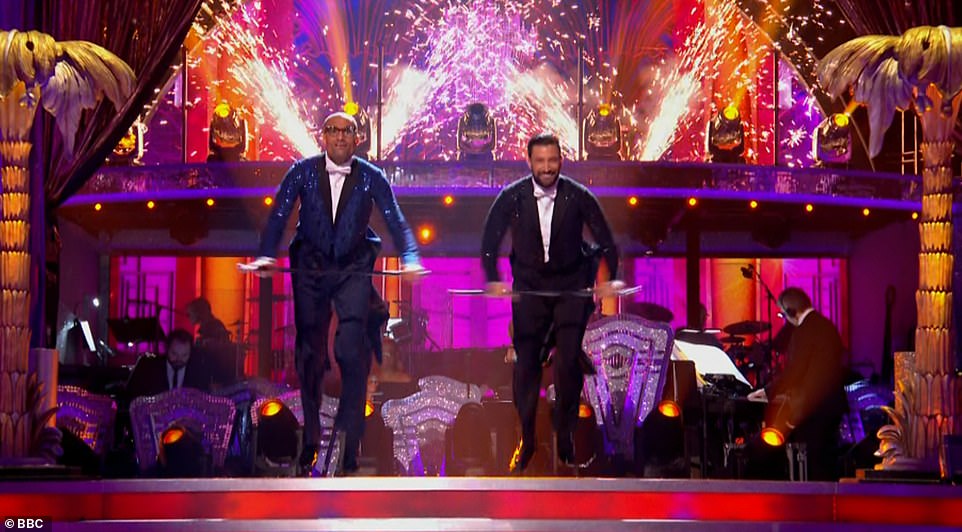 Quickstep: The duo took to the dancefloor with a Quickstep dance, which was dubbed ‘absolutely beautiful’ by judge Motsi Mabuse 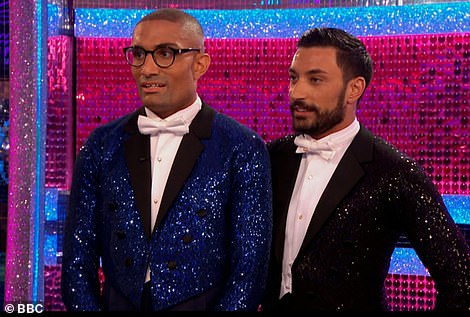 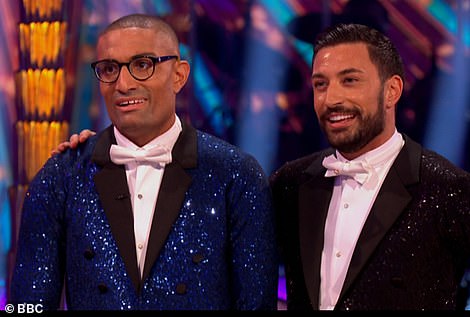 In the psoture: Discussing the dance backstage following the performance, Richie explained: ‘This dance required a lot of good posture

As Giovanni gushed: ‘Very very proud of you, we can definately see improvement, You delivered a good performance, well done’.

The display of support comes after the partners have been plagued by rumours of a fued off of the camera, with sources telling The Sun that professional dancer Giovanni was becoming frustrated with Richie not listening to him in rehearsals.

One insider said: ‘The pair haven’t clicked. Richie is so swept up by the whole experience that he is talking 100 words a minute, and it can be hard for Giovanni.

‘He has told pals that Richie talks instead of listening during training, and it is frustrating.’

They then added that it was early days and they were still getting used to each other: ‘Giovanni thinks Richie has real potential in the competition.’

However, a source close to the pair told MailOnline: ‘Talk of them not getting on is nonsense. They are having such a laugh and were thrilled at the reaction on Saturday night.’

Earlier, Will Mellor kicked off the show with his pro partner Nancy Xu, after topping the leaderboard during the first show.

Stepping out in a bright hawaiian shirt and white jeans, the dancing duo performed a faced-paced Salsa – complete with plenty of spins, lifts and speedy footwork.

But a missed step during the dance resulted in some constructive critism from the judges, with head judge Shirley Ballas noting: ‘There were some mistakes this evening weren’t there, I saw it on your little face. Just get down to a little more hardwork.’ 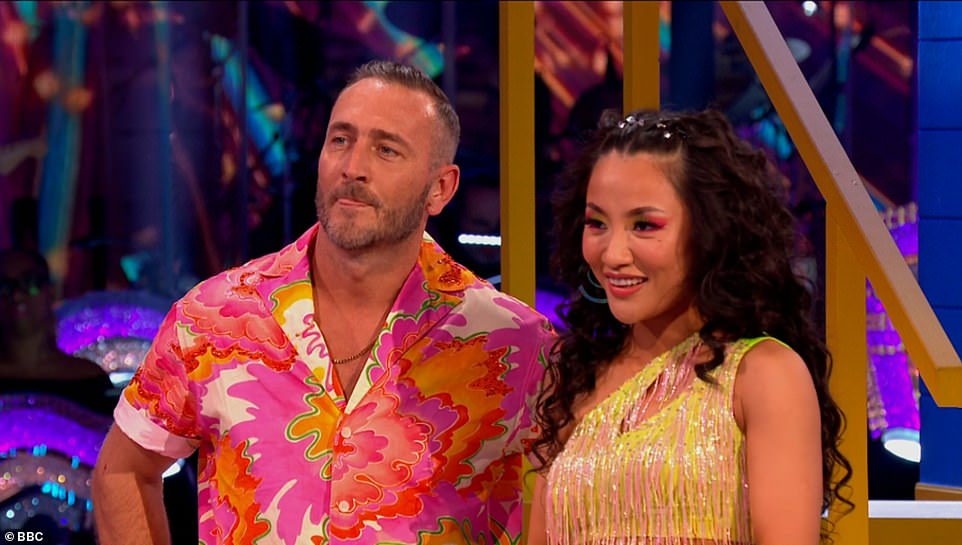 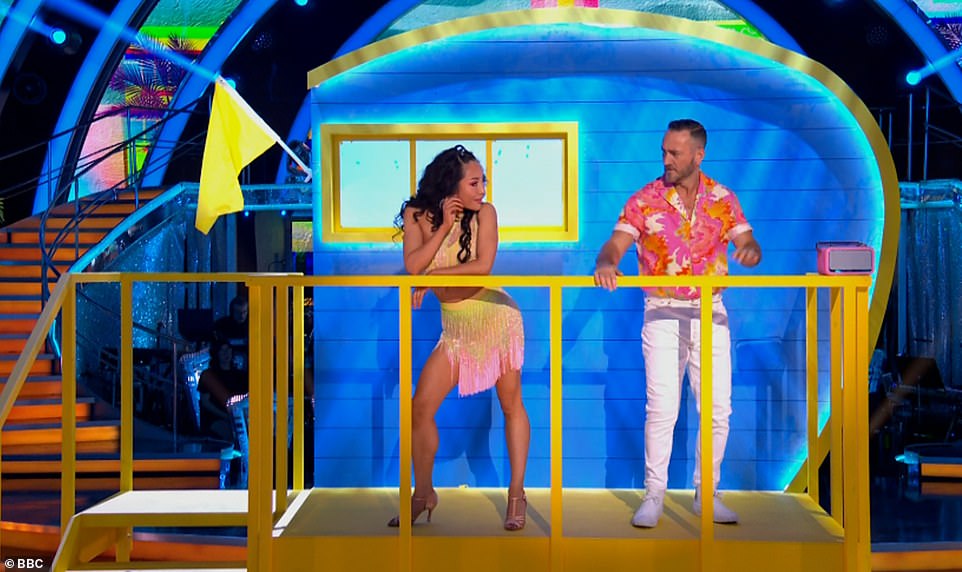 Echoing the area for improvement, Craig Revel Horwood explained: ‘You danced it all just too heavily into the floor, you need to concentrate on your arms.’

But Anton Du Beke and Motsi Mabuse were still impressed as the latter jested that ‘those hips don’t lie’.

Despite still pulling in a score of 26 from the four judges, the accident left Will apologising to his children watching at home for the performance.

‘Sorry it wasn’t great for you kids, I tried my best,’ he said into the screen. 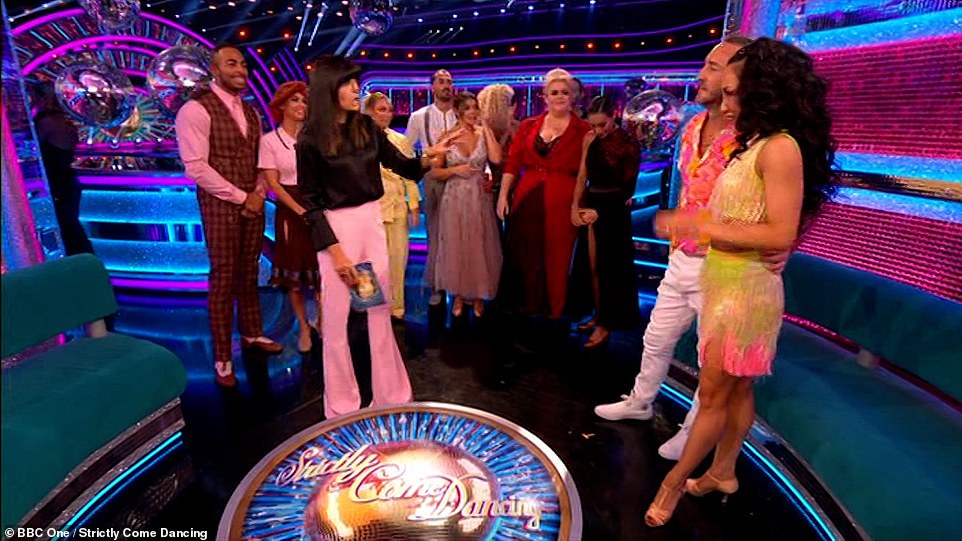 Apologising for ‘maybe pushing you too hard’ was Nancy, as the actor assured that the blunder wasn’t her fault.

Soap star James Bye was up next, looking smart in a black suit as he took on the Tango with partner Amy Dowden.

The romantic performance ended with a delighted Amy shouting for joy as she appeared impressed by the actor – before they recieved a roaring applause.

But judge Craig was critical of the routine as he described it as ‘lacking drama’, as Shirley noticed a ‘slight glitch’ in the middle.

Despite scoring a mere 5 from Craig, the actor and his pro partner Amy bagged a score of 24, beating last week’s 22 score.

Ellie Simmonds was next as she and partner Nikita Kuzmin danced a romantic Waltz to a cover of Elvis’ I Can’t Help Falling In Love With You.

Admitting there were struggles with adjusting the dance routine this week, the swimmer explained that it was ‘so hard’ but hoped she could show viewers that ‘they can dance whoever they are’.

Despite the challenges, the ballroom number recieved a standing ovation from Motsi and Shirley – with Craig noting that he ‘loved the expression’ in the ‘great’ dance.

And it even got Shirley emotional, as she shared: ‘There is so much magic in something so simple, i’m getting emotional, it was just beautifully executed.’

Recieving scores of 8’s and 7’s from the whole panel – Ellie and Gorka brought in the highest score of the evening so far with a 30.

The judges mainly were left impressed by the Countryfile presenter’s co-ordination – praising the strong start from Helen.

But in typical fashion, Craig had some critical words for the pair, branding the performance ‘poor’ as the audience boo’ed.

‘He kept slapping me on the leg and telling me to keep it straight,’ said Helen as Gorka corrected that he was simply ‘tapping’ rather than slapping.

After hitting the bottom of last week’s leaderboard with a score of 15 – Tony Adams and Katya Jones were next to dance the Charleston.

Stepping out in vintage two-piece suit ensembles, the pair ended the jolly performance with pro dancer Katya throwing football ace Tony over her shoulder – as his wife blew a prideful kiss from the audience.

Dubbing it a ‘massive improvement’ from last week, Anton, Motsi and Shirley were all impressed by the dance as they told him to ‘keep on going’ – while Craig was left with a stern face as he disagreed.

And despite a 4 from the judge, Tony topped last weeks score as he bagged a 22 out of 40 overall.

Performing the very first Paso Doble dance of the series was Ellie Taylor and partner Johannes Radebe – who took to the floor in matching purple ensembles.

‘I felt you were just walking around and posing, not actually dancing,’ criticised Craig of the dance, as Shirley admitted ‘it lacked the complete energy of a pase doble, it just missed for me.’

But noticing Ellie’s ‘beautiful line’, Motsi and Anton were more positive on the number – as Johannes said he was ‘so proud’ of his partner.

The TV personality beat out Tony by just one mark as they scored 23 points out of 40, a drop from last week’s 28.

Fleur East took to the floor to perform a Viennese waltz with partner Vito Coppola – as the singer got emotional following the performance, breaking down into tears.

‘Every day i’ve been building it up and getting ready to unleash it,’ said Fleur of her emotion – as judge shirley also appeared emotional too.

The singer brought in an impressive score of 28 points out of 40, just one less than the week prior.

Dancing the second Charleston of the evening was Kaye Adams and Kai Widdrington, with the 59-year-old looking gorgeous in a bright pink, pinstriped mini skirt.

The overall consensus from the judges was that the performance was an improvement from last week’s dance, as they praised the Loose Women panellist’s hard work.

Tess Daly dazzled in a diamante lined white mini dress, while her co-host Claudia Winkleman opted for a classy black shirt with a pair of wide-leg white trousers.

Will Mellor and Nancy Xu: Dancing the Salsa – 26 points out of 40

James Bye and Amy Dowden: Dancing the Tango – 24 points out of 40

Ellie Simmonds and Nikita Kuzmin: Dancing a Waltz to a cover of Elvis’ I Can’t Help Falling In Love With You – 30 points out of 40

Helen Skelton and Gorka Márquez: Cha Cha to Rain On Me

Tony Adams and Katya Jones: Dancing the Charleston to My Old Man Is A Dustman – 22 points out of 40

Ellie Taylor and Johannes Radebe: Dancing the Paso Doble – 23 points out of 40

Fleur East and Vito Coppola: Viennese waltz to Glimpse Of Us – 28 points out of 40