It is seen as the most high-profile reporting job in British broadcasting – and accordingly there is no shortage of candidates to be the BBC’s next political editor.

Her deputy Vicki Young, 50, is also hotly tipped for the role by BBC insiders as is prolific presenter Amol Rajan, 38.

There was intense speculation yesterday over who will get her job.

Miss Kuenssberg, 45, is expected to become a presenter on Radio 4’s Today programme

But is understood that ITV’s political editor Robert Peston, 61, is not interested in replacing Miss Kuenssberg.

It emerged on Thursday that Miss Kuenssberg, who has been in the role for six years, is in discussions with bosses about becoming a presenter on Radio 4’s flagship news show Today. The move is reportedly part of a reshuffle planned for the BBC’s on-air team.

But talks are not thought to have been finalised and neither has the timing of any switch been agreed, it is said. 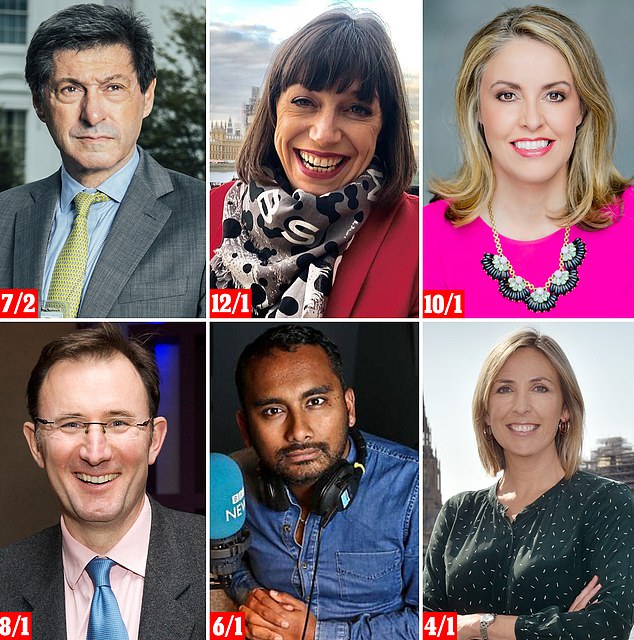 Many regard Mr Sopel, 62, as the favourite for the role. Earlier this week he revealed he is returning to the UK after seven years in his post, which is based in Washington. One news insider said he had been ‘interestingly coy’ about what he was doing next.

There is speculation that Mr Sopel will be replaced in the US by the BBC’s Scotland editor, Sarah Smith, 52.

But she has also been linked with Miss Kuenssberg’s role and Ladbrokes gave her odds of 10/1.

Bookmakers have made Mr Sopel their favourite – he was given odds of 7/2.

Miss Young is second favourite with odds of 4/1 and Mr Rajan is third at 6/1.

Miss Rigby, who was taken off air for three months from December for attending a rule-breaking party during lockdown, was given odds of 12/1 by Ladbrokes.