Structure that powers the movement of sperm is discovered

A never-before-seen structure has been discovered in the tails of human sperm.

Study author Davide Zabeo from the University of Gothenburg, said: ‘We believe that this spiral may act as a cork inside the microtubules [a collection of tubes], preventing them from growing and shrinking as they would normally do, and instead allowing the sperm’s energy to be fully focused on swimming quickly towards the egg.’

Sperms’ tails play a critical role in their ability to swim and consequently fertilise an egg.

It is unclear if the spiral discovery could pave the way for future fertility treatments.

Semen abnormalities occur in 57.1 per cent of men after they undergo bariatric surgery, a study found.

Only four per cent of the study’s 79 participants fathered children after having the procedure, compared to 13 per cent before, the research adds.

Dr Edward Lin, editor-in-chief of the journal Bariatric Surgical Practice and Patient Care, which published the study, said: ‘This study is one important piece in solving the puzzle of male infertility.

‘The challenge is to see if correcting hormonal and micronutrient aberrations are enough to reverse male infertility.’

The researchers, from the Hospital das Clinicas in São Paulo, analysed men who were attempting to conceive with their partner.

All of the participants completed a questionnaire asking them about their sexual quality of life.

They were also assessed for their blood glucose, testosterone, vitamin D, zinc and semen levels.

‘We spotted something we had never seen before’

The researchers used cryo-electron tomography, which produces 3D images of cellular structures and was awarded a Nobel Prize in 2017.

Lead author Johanna Höög said: ‘Since the cells are depicted frozen in ice, without the addition of chemicals which can obscure the smallest cell structures, even individual proteins inside the cell can be observed.’

The scientists initially set out to uncover what human sperm cells look like in 3D.

Ms Höög added: ‘When we looked at the first 3D images of the very end section of a sperm tail, we spotted something we had never seen before inside the microtubules: spiral that stretched in from the tip of the sperm and was about a tenth of the length of the tail.’

The findings were published in the journal Scientific Reports.

What was already known about human sperm-tails’ structure?

Sperm tails consist of around 1,000 building blocks, including structures known as tubulins, which form long tubes.

Attached to these tubes are moving molecules called motorproteins.

These pull and bend sperm tails, enabling them to swim.

Ms Höög said: ‘It’s actually quite incredible that it can work.

‘The movement of thousands of motorproteins has to be coordinated in the minutest of detail in order for the sperm to be able to swim.’ 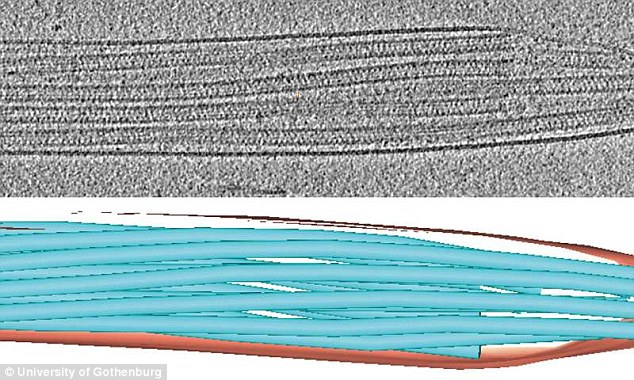 These spirals (seen more clearly in the top image) are thought to prevent sperms’ tails growing and shrinking, which may allow all of their energy to be focused on fertilising an egg

This comes after research released in October 2017 suggested declining sperm counts and doubling rates of testicular cancer could be a ticking time bomb for the human race.

Sperm counts have halved in the western world over the past four decades, which, alongside rising testicular tumours, could be behind plummeting fertility rates and couples’ increasing dependency on IVF, according to Professor Niels Skakkebaek from the University of Copenhagen.

Hormone-disrupting pesticides sprayed onto everyday food may be too blame as the changes are occurring too rapidly for genetics to be at fault, he adds.

Professor Skakkebaek added: ‘Alterations in our genome cannot explain the observations as changes have occurred over just a couple of generations.

‘Modern lifestyles are associated with increased exposure to various endocrine-disrupting chemicals such as pesticides that may be harmful to humans even though exposure to individual chemicals is low.’