Thomas Gibb claims he endured ‘numerous unwanted touchings’ and ‘endless comments’ from Morelli about needing to have a ‘d**k in his mouth’ or a ‘d**k in his a**’, while working with the creative director, according to legal documents obtained excsluively by DailyMail.com.

When Gibb reported the behavior to human resources, the company ‘refused to take any action whatsoever and the sexual harassment continued’, court papers say.

The company eventually forced Morelli to resign earlier this month ‘in an attempt to shield itself from liability’ when Gibb obtained legal counsel. 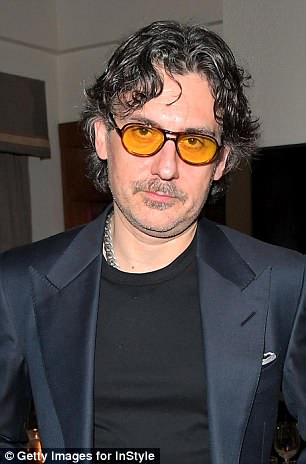 Gibb has worked for Stuart Weitzman’s parent company, Tapestry, since 2017 and became the vice president of product development and production of footwear for the Weitzman shoe brand in March 2018.

He claims that he faced a ‘constant barrage of sexual harassment’ from Morelli after taking on the role, making Gibb ‘extremely uncomfortable’.

During their first meeting, Morelli asked Gibb, ‘How’s your d**k?’, according to court papers, and the harassment continued from there.

In legal documents, Gibb details a trip he made to Spain to work with the Stuart Weitzman design team, including Morelli.

‘Upon Mr. Morelli’s arrival in Spain the following day, he immediately began engaging in sexually harassing conduct in front of the entirety of the Spain ‘Shows by Stuart office,’ court documents say.

Morelli was ‘constantly touching’ Gibb’s legs and asked repeatedly, ‘How’s your d**k’ and ‘Is there any way you would ever consider not being straight?’ legal documents say.

When Morelli asked Gibb his shoe size in front of the design team, Gibb told him he wore a 45, or 11-12 in US sizes.

Morelli responded, according to court documents, by saying, ‘Wow you must have a huge d**k – probably 25cm (10in)’ and ‘You are straight though, it’s so sad’.

Around the same time, Morelli started calling Gibb ‘Tommy Straight’, a nickname that continued through his tenure at Tapestry, according to legal documents.

During a calendar review meeting with the product development and design teams, Morelli put his arm around Gibb, telling him he seemed ‘very uncomfortable’, according to legal documents.

Court papers say Morelli then told him: ‘Perhaps if you had a d**k in your a** you would be more comfortable.’ 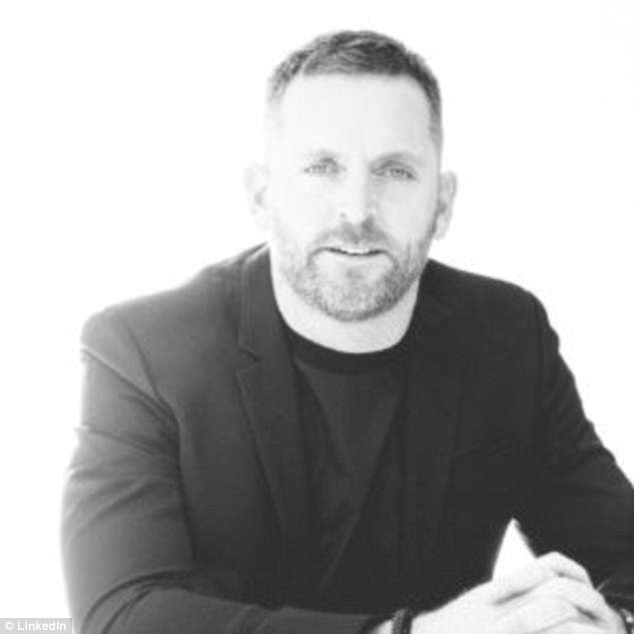 Gibb has worked for Stuart Weitzman’s parent company, Tapestry, since 2017 and became the vice president of product development and production of footwear for the shoe brand in March 2018 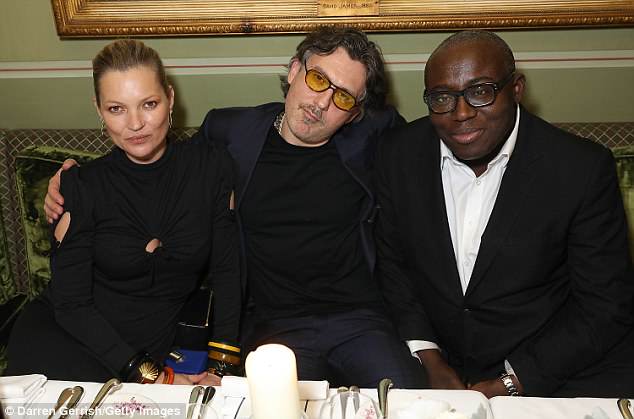 Gibb claims that he faced a ‘constant barrage of sexual harassment’ from Morelli (pictured above with Kate Moss and Edward Enninful) after taking on the role at Stuart Weitzman. During their first meeting, Morelli asked Gibb, ‘How’s your d**k?’, according to court papers

Gibb complained about Morelli’s behavior to human resources on March 20, including the comments made at the calendar review meeting.

On a trip to Spain in late March, legal documents say that Morelli introduced Gibb by saying: ‘This is Tommy Straight. Even if I saw him with a d**k in his mouth, I wouldn’t believe it – he is too straight.’

When Gibb returned from a work trip on May 7, he claims that Morelli had drawn two large penises on his whiteboard – which could be seen by everyone in the office – alongside the name ‘Tommy Straight’.

When Gibb reported the drawings to HR, the conducted was ‘treated as a joke’, with an employee responding ‘Hahaha I’m dying. Giovanni??’, according to legal documents.

The HR employee, Molly Rosen, then said the behavior was ‘[n]ot ok on so many levels’, but no action was taken.

A week later, on May 15, Gibb filed a written complaint of sexual harassment through Tapestry and retained legal counsel.

That day, Tapestry’s global head of supply chain, Peter Charles, told Gibb that he was ‘behind him 150 per cent’, legal documents say.

The next day, however, Charles asked Gibb’ ‘What’s your end game?’ according to court papers. 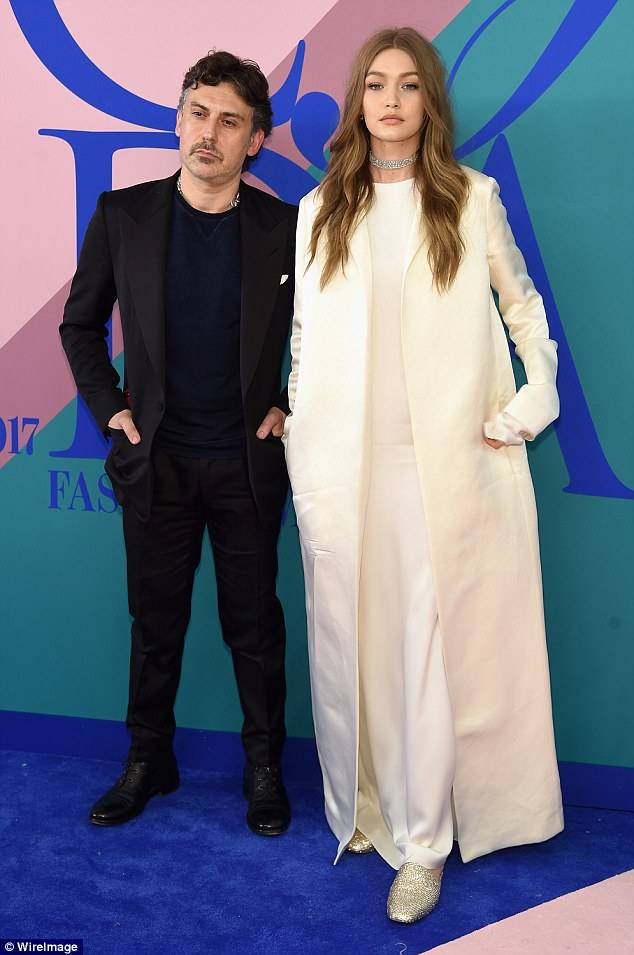 Tapestry announced on May 21 that Morelli (pictured above with model Gigi Hadid in 2017) had resigned, which legal documents call a ‘forced termination’ 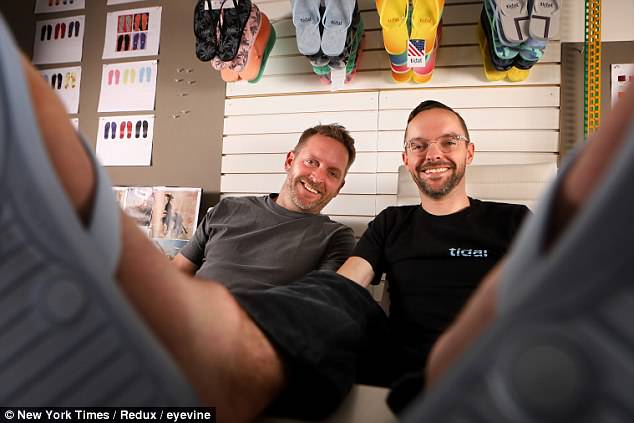 Another HR executive told Gibb that ‘We all need Giovanni to succeed’, legal papers say.

Tapestry announced on May 21 that Morelli had resigned, which legal documents call a ‘forced termination’.

In a departing statement stating that Morelli had resigned over sexual harassment, the company still said they ‘greatly admire’ him.

Gibb claims that he continues to ‘suffer monetary and emotional harm for which he is entitled to an award of damages’.

He has asked that the amount of damages be determined at trial demands a trial by jry ‘on all issues of fact and damages stated herein’.

The suit also seeks a declaration that Morelli’s actions violate state law, which would require the former creative director to remedy his conduct to help future employees.

DailyMail.com has reached out to Tapestry for a statement.

A Tapestry representative told The Hollywood Reporter: ‘While we historically have not commented on pending litigation, we can confirm that the Wigdor firm, representing Mr. Gibb, wrote to our General Counsel on May 15, 2018.

‘On that date, the Company commenced an investigation which ultimately resulted in the announcement on May 21, 2018, regarding the resignation of Giovanni Morelli.’

Tidal is a flip flop company dedicated to hiring veterans and using environmentally friendly production methods. Gibb and his brother secured a patent for digital printing used the production of the flip flops.

Gibb also servs as a mentor on the Council of Fashion Designers of America.