Student, 19, is kidnapped and murdered in Brazil after convicted rapist offers help changing a tyre

A student was kidnapped and murdered after a convicted rapist posing as a Good Samaritan duped her into accepting help with a flat tyre, police in Brazil have said.

Mariana Bazza’s body was found dumped on a dirt track in Itápolis on Wednesday, gagged and blindfolded with her hands tied behind her back.

The 19-year-old university student had vanished on Tuesday morning after leaving a gym in Bariri, nearly 40 miles away from the sugar cane farm where her body was found.

CCTV footage outside the gym showed the suspected murderer approaching her while she stood next to her car, offering to change the tyre on her Volkswagen Gol.

The suspect, identified as 37-year-old Rodrigo Pereira Alves, allegedly slashed the tyre and then offered to fix it to appear helpful. 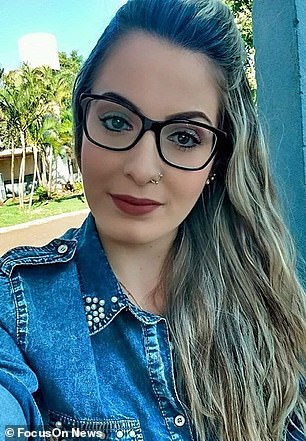 Alves was arrested after the security footage outside the gym identified him as the last person to see her alive.

After speaking to her, he crosses the road while the physiotherapy student gets into her car and drives into a yard on the other side of the dual carriageway.

An hour later, the vehicle is seen leaving the scene. Investigators allege it was driven by the suspect.

He has now been charged with her murder after allegedly confessing that he had killed her before indicating where the body had been left.

Her weeping father said: ‘My wife is desperate; our lives are over. My daughter, my angel has gone. (This) has ended our life.’

In addition to the CCTV footage, Mariana took a picture of the suspect kneeling beside the car as he changed the flat tyre and sent it to family members and her boyfriend, lieutenant navy officer Jefferson Vianna.

Her boyfriend told police that Mariana was not afraid when she sent the picture.

‘She just sent it to tell me what had happened, we laughed at the situation and I sent her a picture of me in my uniform whites because I knew she liked it. I also told her that I loved her,’ he said. 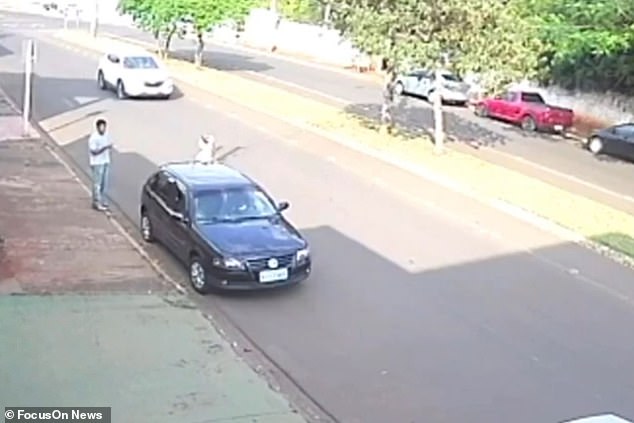 Security footage revealed the moment (above) that Rodrigo Pereira Alves offered to help the 19-year-old student with her flat tyre, which he is suspected of causing 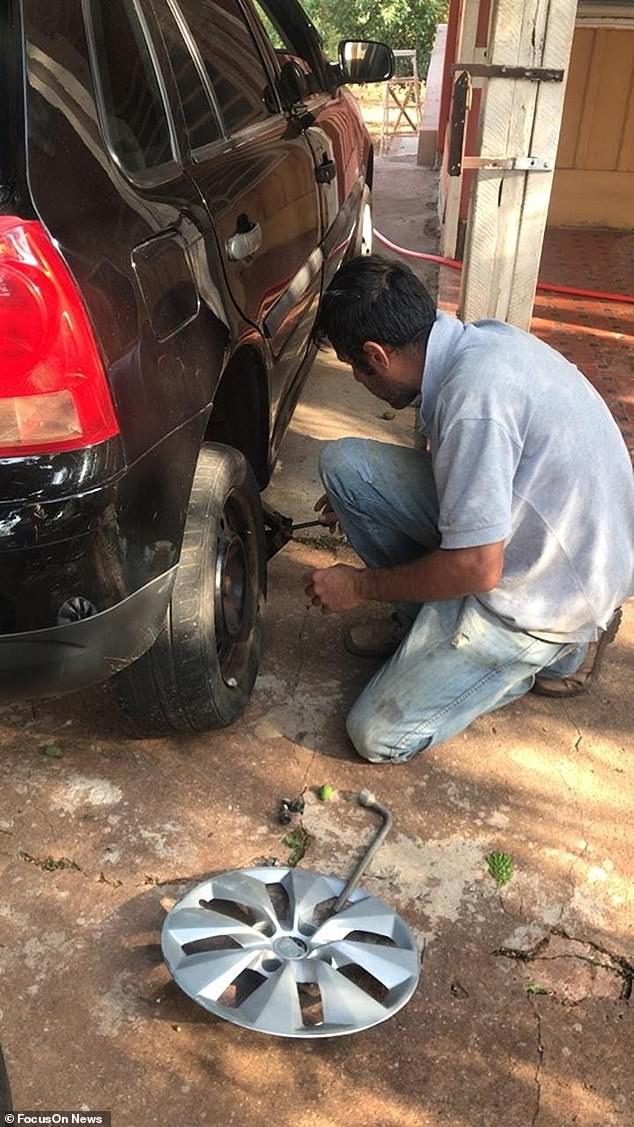 Mariana sent this picture of her suspected killer changing her tyre, initially prompting no concern from her family 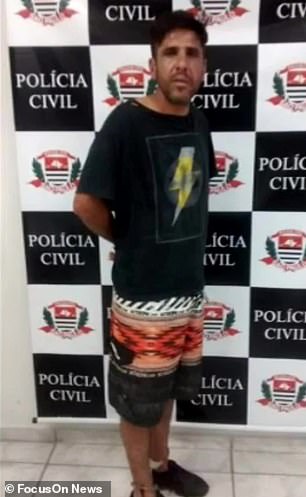 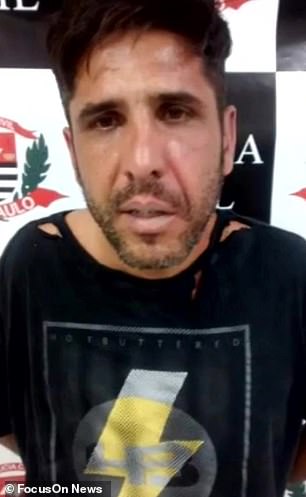 The suspected killer, Rodrigo Pereira Alves (pictured), who has a history of violent crime, was arrested after police saw the CCTV footage of him speaking to Mariana

According to a relative, that was the last the family heard from Mariana.

Speaking to local media, the unnamed aunt said: ‘[Mariana] didn’t answer her phone after that. The phone didn’t have a signal. We were immediately desperate with worry.’

After identifying the suspect from the images, police launched a seven-hour manhunt including a helicopter search.

Alves was eventually found hiding on the roof of a house in Itápolis and Mariana’s car was discovered in the same area.

Chief inspector Durval Izar Neto told FocusOn News: ‘Mariana and a friend left the gym around 8am yesterday. Her colleague told us that she took her motorcycle and left for work.

‘It appears that it was only after this that Mariana noticed one of her car tyres was flat. It was in this context that a man approached her offering to help change it.

‘Images on the security circuit show Mariana getting into her car, driving to the yard and the suspect allegedly leaving with the vehicle an hour later.’

Neto continued: ‘We got permission to break (Alves’s) cell phone secrecy and found that he was in his family’s house in Itápolis.

‘He fled when officers arrived. But after searching the area we found him hiding on the roof of a nearby house.’ 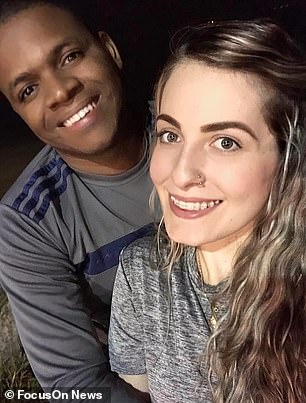 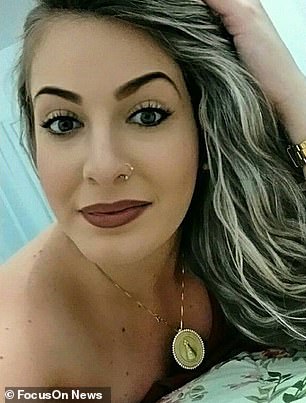 Mariana is pictured left with her boyfriend, lieutenant navy officer Jefferson Vianna, whom she had been dating for three years. She is also pictured right 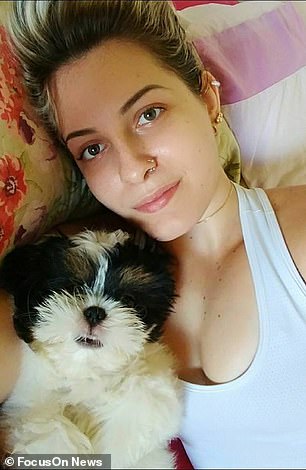 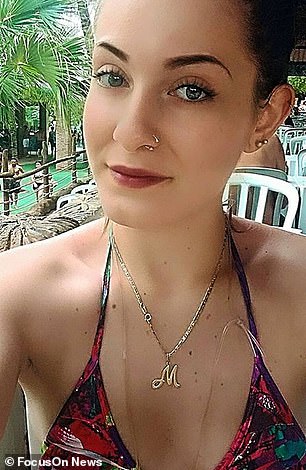 Forensics discovered traces of sugar cane reeds inside the vehicle, which suggests that it was driven around in a rural area.

They also recovered a knife from under the seat but this is not thought to have been used in the crime. Marks inside the car indicated that there was a fight but there were no apparent traces of blood, and hairs, possibly from the victim, were collected.

An autopsy is expected to determine the cause of death and whether the teenager suffered sexual violence.

Police revealed that Alves is a convicted criminal with a violent track record. He has spent 12 years behind bars for kidnapping, rape, attempted murder, robbery, extortion and was released from prison just over a month ago.

The owner of the small yard where the tyre was fixed told detectives the accused had been hired to paint the house built on the land but admitted that he didn’t know much about his background.

Mariana’s parents, Aírton and Marlene, had to be sedated in hospital after hearing about their daughter’s death.

‘She is an only child. She is the apple of their eye and was committed to her studies,’ said the aunt.

She added her niece had been planning to move closer to her boyfriend’s naval base in Santos. The pair had been dating for three years.

The suspect appeared in court on Wednesday and has been detained in custody.