Student, 20, who dismissed her headache as a hangover had meningitis and blood poisoning

A student who thought her headache was caused by a hangover ended up in a coma ‘fighting for her life’.

Alice Baird, 20, felt worse for wear after a night out with friends on March 28 this year.

After trying to ‘sleep it off’, Miss Baird woke in agony an hour later and even had convulsions on the way to the hospital.

Once at A&E, tests showed the marketing student had bacterial meningitis and septicaemia, or blood poisoning.

Miss Baird, from Orpington in Kent, was put in an induced coma for three days and spent a total of two weeks recovering in hospital.

Although she pulled through, Miss Baird claims she still suffers with fatigue nearly six months on.

Alice Baird thought she was hungover when she woke with a headache on March 28 this year. She was later diagnosed with meningitis and septicaemia. Pictured before the ordeal, the student claims she ‘never thought she would have to fight for her life at 20 years old’ 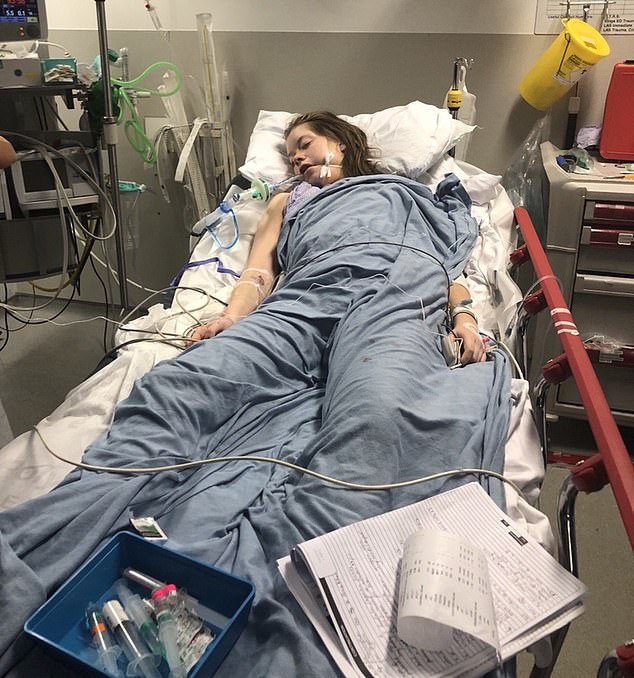 Miss Baird spent three days in an induced coma (pictured) at the Princess Royal University Hospital in Orpington. After a total two-week hospital stint, she was well enough to go home 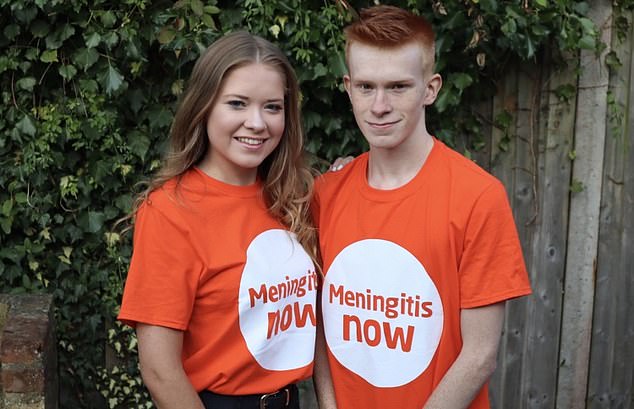 Miss Baird got home from a night out with her netball team at around 1am one morning last March.

‘But I woke up the next morning with a headache and, although surprised, I wondered if it was a hangover.’

Miss Baird rang her mother Joanne to tell her she was feeling unwell, and going to try and get some rest.

‘I tried to sleep it off [but] I couldn’t,’ Miss Baird said. ‘An hour later I was in agony.

‘My headache had just got worse and I had flu-like symptoms. I called my mum again and said I felt really unwell. I asked her to come and get me.’

Miss Baird’s mother drove the two-hour journey from Kent to Portsmouth, where her daughter was in her second year of university.

‘By the time my mum arrived I felt really ill, my neck was stiff, I had been sick and my eyes had become so sensitive to the light I could barely open them,’ Miss Baird said.

Her mother started to take Miss Baird home, only for her to have convulsions during the journey.

‘This is the part I don’t remember too clearly but have been told about,’ Miss Baird said.

‘I started fitting and having convulsions in the car, and mum was obviously really worried.

‘She called my dad who is a medic with a Search & Rescue team and he asked her if I was still breathing and, when told I was, said to drive straight to A&E.’ 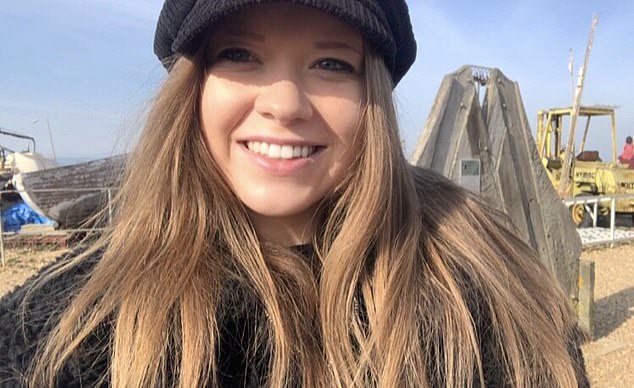 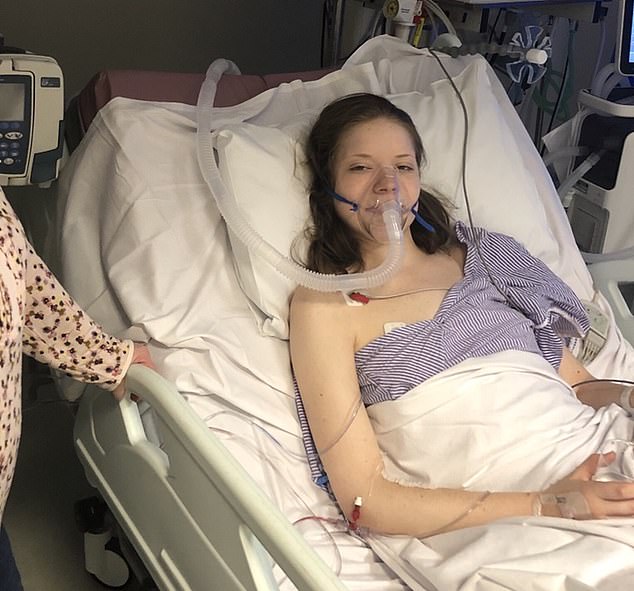 Pictured in hospital, the student even started having convulsions on the way to A&E

Once she arrived at the Princess Royal University Hospital in Orpington, doctors ran out to carry Miss Baird inside. She was later diagnosed.

‘I was put into an induced coma and kept in ICU for three days,’ Miss Baird said.

‘My family didn’t know whether I would survive, or whether I would come through it without brain damage, deafness, sight loss or limb loss – all of which can happen as a result of meningitis and septicaemia.

‘At 20 years old I never thought I’d have to fight for my life. Even when I came round, it was really frightening.’

Miss Baird spent two weeks in hospital. Although she managed to sit her end-of-year exams, she is still not back to her old self.

‘I missed a holiday to Croatia with friends and a family holiday to Belgium, which was a shame,’ she said.

‘But it was nothing compared with what I could have missed – the rest of my life. I am incredibly lucky to be here, to be alive.’

Miss Baird is speaking out during Meningitis Awareness Week to encourage people to be aware of the condition’s symptoms, such as a stiff neck, dislike of bright lights and blotchy rash that does not fade when pressed under glass.

The student had the MenACWY vaccination before starting university. The jab only protects against four strains of the bacteria. It is unclear what strain Miss Baird had.

‘[Meningitis] can take hold so quickly I just want to warn other young people like me to be aware of meningitis and to take action if they have any concerns,’ Miss Baird said.

‘Early action could save their lives or prevent life-changing after-effects.’

‘I did a firewalk for the Meningitis Now which does so much to raise awareness about the illness and support people who have had it,’ she said.

‘I have collected about £710 ($879) now but, as much as it’s about money, it’s about making people like me aware of the symptoms and I would just say, “Don’t take chances and be aware”.’

Learn more about meningitis and its symptoms here. 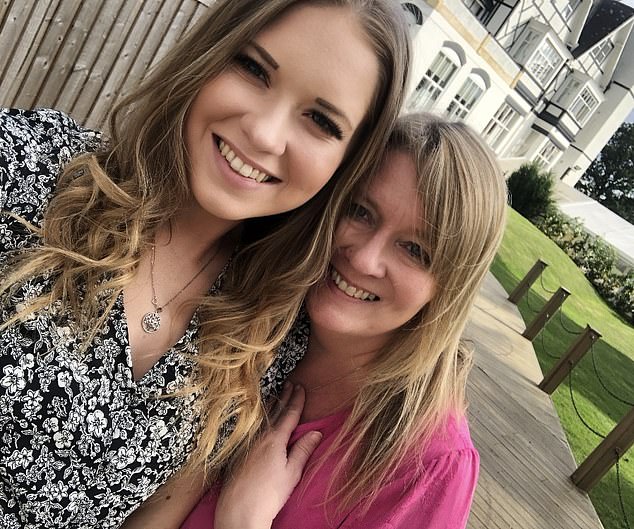 Miss Baird initially rang her mother Joanne (pictured together) to tell her she was feeling unwell. Joanne drove the two-hour journey from in Kent to Portsmouth, where Miss Baird was in her second year of university, to take her home. They then had to go to A&E 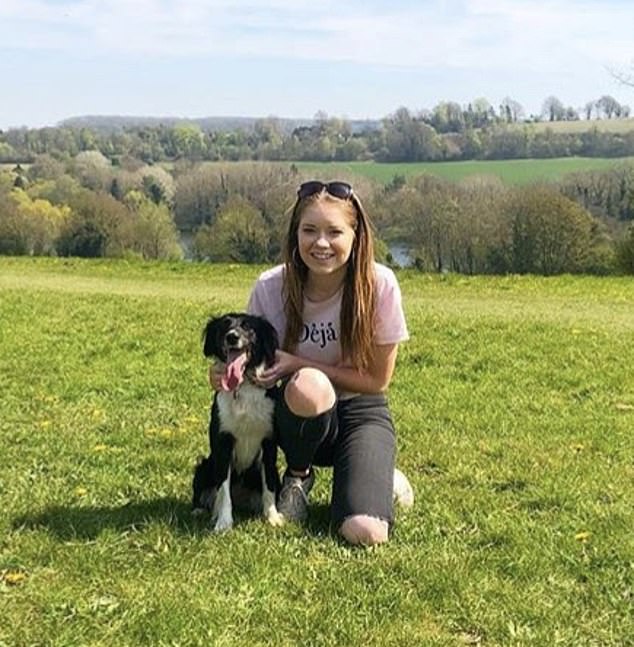