An owner has revealed how to create a DIY ear muff out of a single sock to help keep dogs calm on bonfire night.

Caitlin Miller, 17, from South Shields, Tyne and Wear, had been looking for a more cost-effective way to calm her pets when fireworks were let off.

Instead of purchasing stress bands or calming jackets from specialist stores, she decided to create a headband to muffle the sound – simply by cutting the ankle and toes off a pair of socks.

The comfortable contraption helps quieten the distressing noises and creates a slight compression that makes it feel like the dog is being cuddled, she claimed.

She shared her nifty trick on Facebook on October 25 in a bid to help other dog owners prepare for firework season.

Caitlin claims that her trick worked wonders on her five-month-old Jack Russel Cookie and her nine-year-old pomchi Ruby.

When posting on Facebook, Caitlin said: ‘For all those whose dogs are scared of fireworks.

‘Instead of buying anti stress bands or anything else off of the internet, just cut the two ends off a sock and put it on their head ensuring it’s not too tight, but comfortable.

‘It gives them a sensation of being cuddled and relaxes them. We used them last year and as firework season is back we’re using them again and thought I’d share with my friends.’

Caitlin said that Ruby has been afraid of fireworks her entire life and no matter what she tried, nothing could help calm her down. 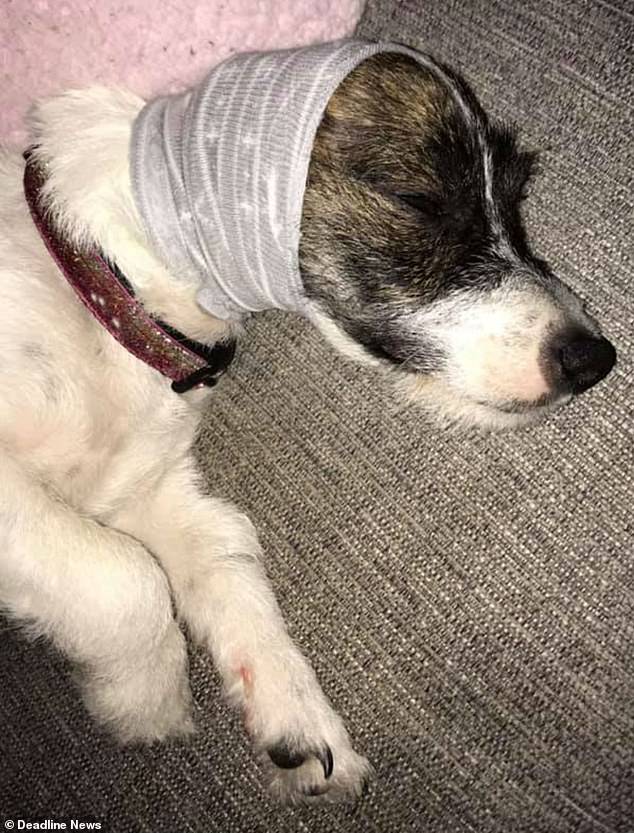 She said: ”She began to rip out patches in her fur due to this anxiety, so last year we then took it further to the vet.

‘They gave her anxiety pills and a cone. The anxiety pills didn’t do anything and the cone only made her more uncomfortable than she already was.

‘After all this not working I then went on Google to research if anything would help them and I came across the anti-stress band which instantly brought my attention and did some investigating on how it works.

‘It gives them a sensation of being cuddled and of course covered their ears which blocked out some of the sounds of the fireworks.

‘I’m not sure if it’s true, but I also read it releases endorphins that makes the dogs happier and further relaxed.’

When asked about her DIY dog comforters, she said: ‘I noticed that it looked a bit like a sock on the dog’s head so I thought I would try it with a sock and cut off the two ends.

Since posting her cost-free hack, Caitlin’s idea has been shared more than 15,000 times 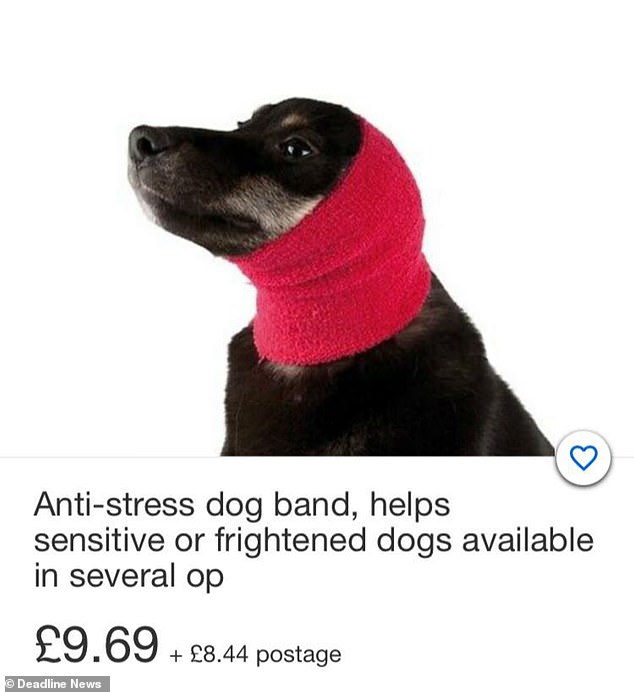 ‘I found one that wouldn’t be too tight but not too loose either.

‘After trying it I realised it was the only thing that kept her calm and happy.

‘I also recently got a puppy, Cookie, she is only 5 months old and has never experienced fireworks before.

‘Much like Ruby, she didn’t like them and barked at them. Trying this on her she was unsure at first, something going over her head, but once it was on it was an instant relaxation.’

Since being uploaded to Facebook at the weekend, Caitlin’s post has been shared more than 15,000 times, with thousands of people leaving comments.

Thousands of people left comments on Caitlin’s post, with one person describing the creation as ‘amazing’ while another was left shocked they hadn’t thought about it before

One person said: ‘This sounds like a good idea!’

Another wrote: ‘Lovely idea. Our pooch heard fireworks for the first time last week and panicked.

‘I showed him what was making the sounds and when he hears them he’s calm as peanuts and takes himself outside so he can sit and watch them.’

Responding to the post, a third said: ‘After all these years, never thought of it. Small Border Collie. terrified of bangs.’

In 2019 research conducted by the RSPCA revealed that 62 per cent of dog owners said their animals were visibly distressed by fireworks.

Additionally, since 2014 they have received 2,200 calls about firework related issues.