A ‘broke university student’ was diagnosed with melanoma at just 21 after her boyfriend spotted a dark freckle on her back, before launching her own sunscreen to encourage others to wear the life-saving product.

Hillary Wilcox, who is now a naturopath and owner of Maaemo Organic skincare, was first alerted to the suspicious mole by her partner at the time, who mentioned one of her freckles was ‘almost black’.

‘The freckle was in a position on my back that I never would have been able to see myself, so I am incredibly lucky and grateful that he noticed it and prompted me to get it checked,’ the now 27-year-old from the Mornington Peninsula, Victoria, told FEMAIL.

Hillary was naïve to the risks of skin cancer at 21 and thought it was something that affected Aussies later in life, but with the encouragement from her boyfriend, she booked in a visit with her GP.

Hillary Wilcox, who is now a naturopath and owner of Maaemo Organic skincare, was first alerted to the suspicious mole by her partner at the time, who mentioned one of her freckles was ‘almost black’

‘The GP briefly looked at it and actually told me it wasn’t anything to worry about,’ she said.

‘I left it for a while longer but my partner at the time kept telling me it just looked so black and different to any of my other freckles. He really encouraged me to go to the actual skin cancer clinic.

‘Skin checks and mole maps are done in way more detail but they are expensive and being a broke university student at the time, the upfront costs were a big deterrent for me.

‘So at the time I was not in a rush to make the appointment, especially since the GP said it was okay.’

Thankfully the insistence of loved ones around her saw Hillary locking in an appointment all the same, only to have it removed the very same day.

Thankfully the insistence of loved ones around her saw Hillary locking in an appointment all the same, only to have it removed the very same day (pictured is Hillary’s new sunscreen product)

Melanoma: The most dangerous form of skin cancer

Melanoma is the most dangerous form of skin cancer. It happens after the DNA in skin cells is damaged (typically due to harmful UV rays) and then not repaired so it triggers mutations that can form malignant tumours.

Once the skin cells had been tested doctors alerted Hillary to the fact it was an early stage melanoma.

Melanoma is the most common cancer for the 20 to 39 age group to get in Australia, partly because of our outdoor lifestyle and harsh climate.

It happens after the DNA in skin cells is damaged (typically due to harmful UV rays) and then not repaired so it triggers mutations that can form malignant tumours.

‘It was pretty shocking to hear it, especially at such a young age,’ Hillary said.

‘I had grown up seeing the ads on TV which tell you that melanoma is incredibly dangerous so I knew it was serious.

‘Skin cancer is almost entirely preventable so I was honestly just disappointed in myself for not being more careful and proactive about sun protection.’ 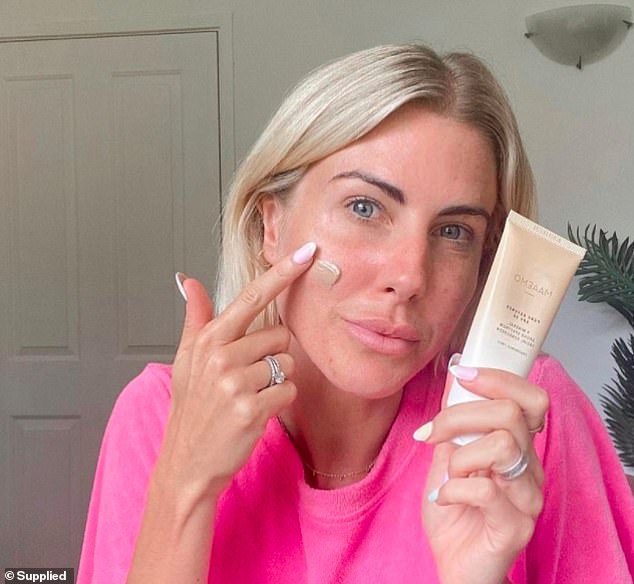 She said: ‘Skin cancer is almost entirely preventable so I was honestly just disappointed in myself for not being more careful and proactive about sun protection’

Hillary now lives with a large scar on her back from where surgeons had to remove a large portion of tissue from the cancerous site, but most importantly the experience encouraged her to create a sunscreen she wanted to put on her face and body.

‘I have tried most of the sunscreens on the market that were readily available to me,’ she said.

‘I found that chemical SPFs were not well suited to sensitive skin and would also break me out, and then I found that most of the mineral based SPFs either felt super chalky and drying on my skin, or they left a white cast on my face.

‘Then there’s all the scents! I found that chemical SPFs were highly scented and the mineral/zinc options smelt very unpleasant. When I asked others what they used, the feedback was similar. The options, especially in the mineral category were very limited.

What are the warning signs of melanoma?

The first five letters of the alphabet are a guide to help you recognise the warning signs of melanoma.

A is for Asymmetry. Most melanomas are asymmetrical. If you draw a line through the middle of the lesion, the two halves don’t match, so it looks different from a round to oval and symmetrical common mole.

B is for Border. Melanoma borders tend to be uneven and may have scalloped or notched edges, while common moles tend to have smoother, more even borders.

C is for Colour. Multiple colours are a warning sign. While benign moles are usually a single shade of brown, a melanoma may have different shades of brown, tan or black. As it grows, the colours red, white or blue may also appear.

D is for Diameter or Dark. While it’s ideal to detect a melanoma when it is small, it’s a warning sign if a lesion is the size of a pencil eraser (about 6 mm, or ¼ inch in diameter) or larger. Some experts say it is also important to look for any lesion, no matter what size, that is darker than others. Rare, amelanotic melanomas are colourless.

E is for Evolving. Any change in size, shape, colour or elevation of a spot on your skin, or any new symptom in it, such as bleeding, itching or crusting, may be a warning sign of melanoma.

‘When you ask someone why they don’t wear sunscreen, it normally always comes back to the fact that they can’t find one they like enough to use.’

So Maaemo Organic has launched its Pure Defence SPF 30 which is a zinc based sunscreen that uses physical UV filters to act as a physical barrier to reflect UV rays from the skin.

‘It’s scent free, super hydrating and rubs in without leaving a white cast behind,’ she said.

‘We’ve sold over a thousand units since we launched which hopefully means over a thousand people who are now wearing SPF daily that might not have been doing so before.’