An 18-year-old student from Ireland is the first to announce that she has received a invitation to the royal wedding in May.

Daniella Timperley, from Randalstown, is one of the 600 members of the public to receive an invite to Prince Harry and Meghan Markle’s nuptials in Windsor on May 19.

The sixth-form student who studies at St Louis Grammar School, Ballymena was chosen because of her extensive charity work.

Announcing the news on Twitter, St Louis school wrote: ‘What a week it has been for Daniella! Not only was she named Top Youth Volunteer 2018, she has also received an invitation to the royal wedding of Prince Harry & Meghan Markle as a result of her extensive charity work!’

The MailOnline has contacted St Louis Grammar for a comment. 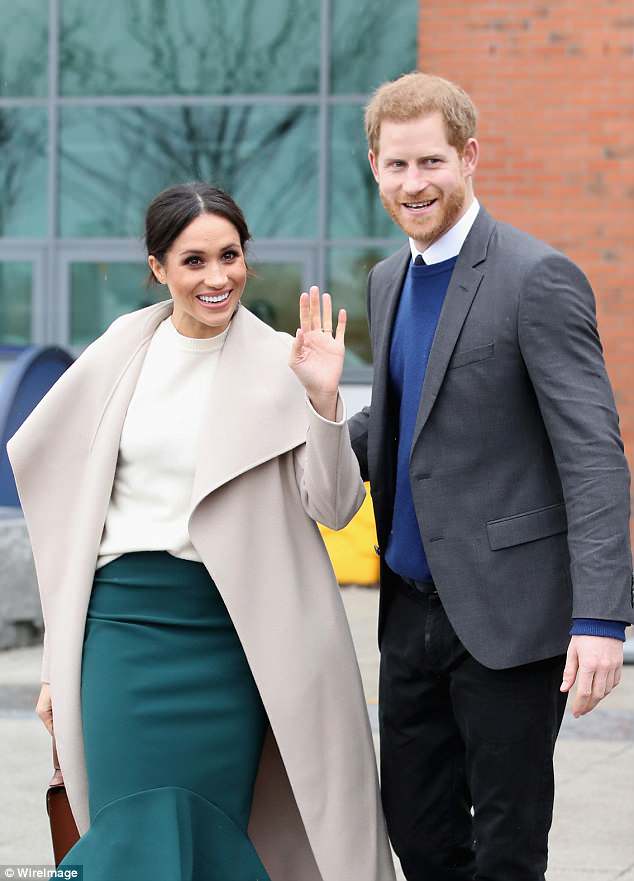 The couple, who will marry at St George’s chapel in Windsor on May 19, chose to invite 600 members of the public to their nuptials 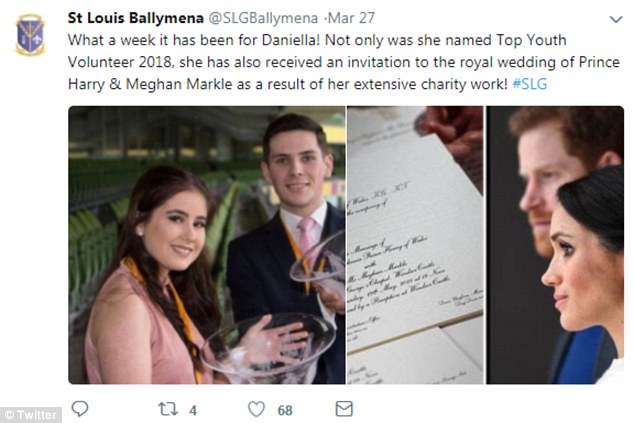 Daniella shares Meghan’s passion for women’s rights having been involved with Women’s Aid ABCLN from a young age and even represented the charity on the BBC Children in Need Youth Panel in 2015.

The teen has also dedicated her time to working in care homes, helping at homework clubs at her school and has also spent time raising funds for children in Romania.

Speaking to the Paramerica Spirit of Community awards teacher Bronagh McGreevy, said: ‘In comparison to many young people, Daniella gives up the temptations on TVs, going out and other normal teenage activities to selflessly serve others. Daniella will also enjoy a lunchtime reception at St George’s Hall, which is being given by the Queen. Pictured: The invitations sent out by the couple

‘She is a remarkable young lady who I respect and admire. She is indeed a special young lady.’

Daniella will join 599 guests at Prince Harry and Meghan Markle’s wedding service at St George’s Chapel before making their way to a lunchtime reception at St George’s Hall, which is being given by the Queen.

The invitation stipulates a strict dress code with men asked to don military uniform – likely to be worn by Harry, a former solder who is now Captain General of Royal Marines – or a morning coat and lounge hat, with women asked to wear a day dress and hat.

The invitations, posted last week, have been produced by company Barnard & Westwood, which has held a Royal Warrant for Printing & Bookbinding by Appointment to Her Majesty The Queen since 1985.