A student was left red-faced after accidentally sending one of her professors a paper addressed to ‘Professor whats his nuts’.

Zoey Oxley, 18, is a student at Ohio University in Athens. She took to Twitter on Thursday to detail the mishap, which occurred after she turned in an assignment to her professor John Hendel.

When Oxley wrote her paper, she typed her own name at the top of the first page and was supposed to include Hendel’s name as well.

Oops! Student Zoey Oxley accidentally turned in an assignment in which she called her instructor ‘Professor whats his nuts’ instead of his real name, John Hendel 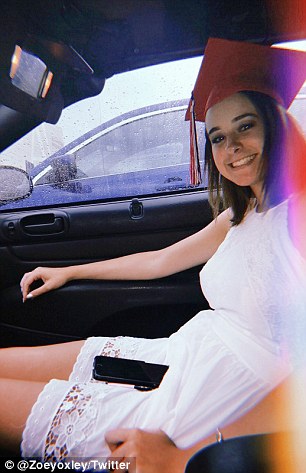 Owning up to it: Oxley (right) tweeted about the mishap on Thursday, sharing a photo of her paper with the ‘Professor whats his nuts’ mention (left)

However, she called Hendel ‘Professor whats his nuts’ instead, intending to switch out the nickname for Hendel’s real name before submitting the assignment.

Her plan backfired and Oxley forgot to make the change before uploading her paper — for good — onto her school’s online platform.

After realizing her mistake, a horrified Oxley sent Hendel an email to apologize profusely for the mishap.

‘Professor Hendel,’ she wrote, ‘I am writing this email very embarrassingly. As I began writing my paper, I wrote out the template.

‘Unfortunately, I could not remember your last name, so I filled it with something completely unprofessional.

‘It was my intention to change the name before submission, but it completely slipped my mind. I attempted to resubmit the assignment but was unable to.

‘I am so very sorry for the lack of respect that was used and again I apologize for this mistake. I hope that this does not reflect what you think of me and that the next assignment I can address by the correct name.

‘Thank you again and I am so sorry.’ 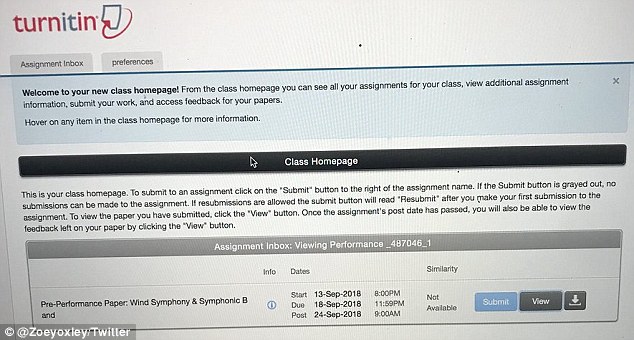 How it all began: The student fully intended to swap out the nickname for Hendel’s real name before uploading it to her school’s online platform (pictured), but she forgot

So sorry: Oxley promptly sent Hendel an email apologizing profusely for her mistake

Didn’t go unnoticed: Before Oxley tweeted about the mishap, Hendel did the same thing from his own Twitter account and appeared to see the humor in the situation

As it turned out, Hendel seemed to see the humor in the situation.

Before Oxley tweeted about the mishap, Hendel did the same thing on his own account, in a message that has now gone viral.

‘A student emailed me, profusely apologizing for getting my name wrong at the top of their paper, and I was like, “Thanks, whatever, nbd,”‘ he tweeted on Wednesday.

‘Then I got to their paper and saw their instructor was “Professor whats his nuts.”‘

Among the thousands of people who saw it was Oxley, who tweeted about her mistake on Thursday.

She simply wrote ‘a series of unfortunate events’ next to four images.

The first shows her college’s online submission platform, the second is a photo of the top of her paper addressed to ‘Professor whats his nuts’, the third features the email she sent to Hendel, and the fourth is a screenshot of Hendel’s viral tweet.

Her message has also gone viral, receiving more than 370,000 likes.

Oxley is now waiting to see whether Hendel will address the issue during her next class, which is scheduled for next Thursday.