A geography student has one of the first people to be sentenced under new laws for peddling bag full of potentially fatal ‘hippy crack’ at a festival.

Nicholas Chroussis was charged with possession of the legal but psychoactive drug after being found with almost 250 nitrous oxide canisters, a dispenser and 250 balloons.

The 22-year-old was stopped by security staff at Boundary Festival in Brighton, East Sussex, and claimed the large amount was for personal use.

When Sussex Police revealed text messages on his phone that showed that he was planning on selling the canisters to other festival goers, he admitted the offence.

The student, from Wood Green, North London, was sentenced at Lewes Crown Court to six months imprisonment suspended for 18 months.

He was also ordered to complete 150 hours of unpaid community service.

Possession with intent to supply a psychoactive substance became an offence under the Psychoactive Substances Act 2016 and came into force in May last year. 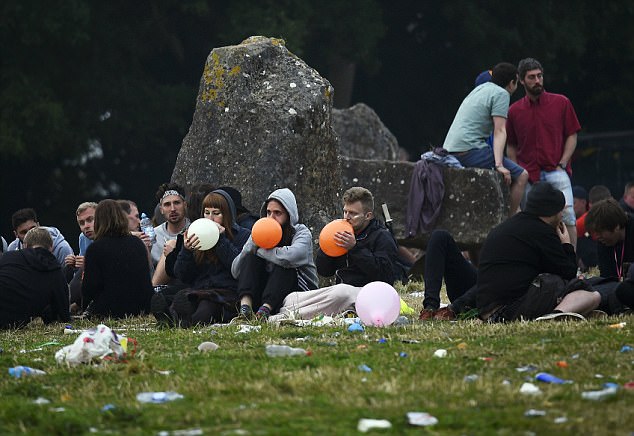 Detective Constable Julian Harrison-Jones said: ‘This is believed to have been one of the first prosecutions of its kind in the country. The maximum sentence for the offence is seven years’ imprisonment and an unlimited fine.’

A spokesman for Sussex Police said: ‘A geography student from Wood Green, London, was sentenced to six months’ imprisonment, suspended for 18 months, after admitting that he had attended the Boundary Festival in Stanmer Park, Brighton, in September 2016 with intent to supply a psychoactive substance – nitrous oxide, commonly known as laughing gas, Nos or hippy crack.

‘Chroussis was stopped by security staff as he tried to enter the festival and was found to be in possession of 245 nitrous oxide canisters, a dispenser and 250 balloons.

‘The canisters were intended for legitimate use in the catering industry for the production of whipped cream. Nitrous oxide is also cleared for use in medical and dental applications, for example as an anaesthetic.’