A second grader has made adults across the nation feel guilty after revealing they wished their parents would spend less time on their cell phones.

The student’s homework assignment went viral thanks to one teacher who noticed their heartbreaking answer to the prompt ‘Tell me about an invention you don’t like’.

‘If I had to tell you what invention I don’t like, I would say that I don’t like the phone,’ the student wrote.

‘I don’t like the phone because my panert are on their phone every day (sp).’ 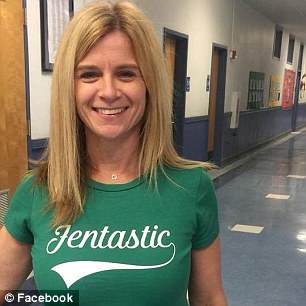 ‘A phone is sometimes a really bad habet.

‘I hate my mom’s phone and I wish she never had one. That is an invention I don’t like.’

At the bottom of the assignment the student included a drawing of a cell phone with a big ‘X’ drawn over it and a sad face staring at it and saying ‘I hate it’.

Jen Adams Beason, the student’s teacher, posted a photo of the assignment on Facebook last Friday.

Beason, who lives in Louisiana, revealed that out of 21 of her students four of them wrote about cell phones.

At the end of her post, Beason added the hashtags #getoffyourphones and #listentoyourkids. Beason, who lives in Louisiana, revealed that out of 21 of her students four revealed that they wished cell phone had not been invented for similar reasons (file photo)

Nearly half of the parents involved in a 2017 study admitted that technology interrupted interactions with their children three or more times a day.

Only 11 percent said that absolutely no technology distracted interactions with their children.

Another study last year found that children behave worse and throw more tantrums when their parents are distracted by technology.